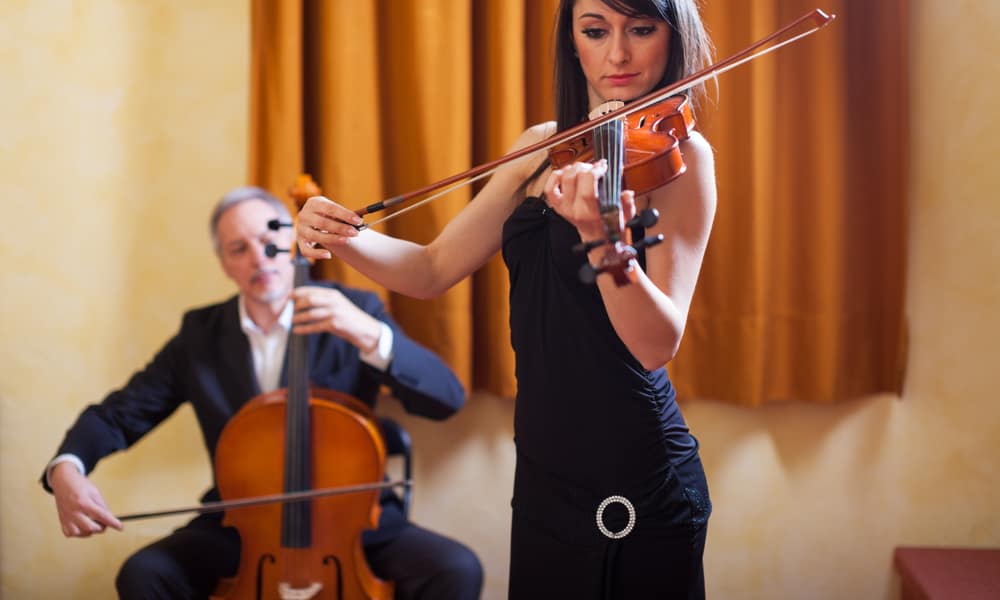 Before even considering facing these two instruments, maybe you should listen to famous cellist Jacqueline du Pré or pioneered violinist in jazz music Joe Venuti. Both of them are virtuosos on their instruments and belong to modern musicians of the 20th century. They will show you and enchant you with the melodic sounds and unbelievable performances of both instruments, the cello and the violin.

Only by looking at cello and violin, you can see the differences as well as similarities among them. Therefore, the cello vs. violin will be a tough fight. Of course, if you asked violinist Niccolò Paganini and cellist Luigi Boccherini, they would each defend their instruments. However, you should take a better get to know both of them and decide on your own.

Cello vs. Violin – Which Instrument is Older?

There has been a blunder that the violin is older. On the contrary, the fact is the cello came first. Both instruments come from the same era, and they are practically contemporaries. However, the cello is an older sibling.

As you have probably known, the Medici family significantly influenced the art and music society in the past. Therefore, it was not a surprise that the cello maker, Italian Andrea Amati, made the first instrument in 1538 for his famous patron, Katharine de Medici. Later on, he made the first violin in 1560.

The cello and the violin were among the 38 instruments made for the French Court of Charles IX. Keep in mind that they were much more sizable than the instruments we play nowadays.

They belong to the violin family together with the viola and the double bass. Both are in the same bow-string instrument group and had the same ancestors in lira da braccio and the medieval Byzantine Lira.

When you think of the violin family, many classical, jazz, pop musical pieces, and even movie soundtracks come to mind. You are probably fascinated by famous tunes such as ‘Star Wars Medley’ tune or Wagner’s ‘Flight of The Valkyries’ from the movie Apocalypse Now. No one can resist the beauty of that music since it makes every movie, cartoon, or series highly tense and pretty strong.

Cello vs. Violin – Which One is Bigger?

When it comes to the instruments’ size, you will notice that the cello is more considerable than the violin. Consequently, playing is not the same, so you need to place a violin horizontally and the cello vertically while performing.

When you measure the violin from its endpin to the scroll, you will see it is 23 inches (58.4 cm) long. On the other hand, measuring the cello from the base to the scroll will show you that it is 47.6 inches (1.2 m) high.

As you can see, the cello is twice longer from the violin. It looks even higher because of the headpin, which allows the cellist to separate the instrument from the ground. If you wish to choose a lighter and smaller instrument, the violin is a better choice for you.

The comparison of weight is easy. Only by looking at both instruments, you can see the violin is much lighter. The standard violin is about 0.88 pounds (0.4 kg) heavy, while the full-size cello has approximately 5 pounds (2.27 kg)

Consequently, the cello is more massive and harder to carry and transport. However, both instruments are made of different sorts of wood, so the cello is not that heavy compared to its size.

Luthiers are the people who make delicate wood instruments, such as ones from the violin family. The material they use is often of high quality and a combination of several wood types.

The most common materials used for making the violins are maple, ebony, willow, and spruce. The spruce and willow are often for chamber and face parts of the violins, while maple and spruce are the best options for the violin framework and neck. The most famous violin maker was Antonio Stradivari.

Instrument makers use maple or ebony for the frames like the cello back and its sides. For more commercial and less expensive cellos, they often use laminated wood or composite board.

There is an unwritten rule that the materials used for making the violins vary from maker to maker and even can depend on the period and luthiers’ style.

Differences in Strings and Bows

Since the cello is a bigger instrument, it is logical that it has longer strings than the violin. However, the difference in strings is not just in length but also in their thickness.

The cello strings are thicker than the violin ones. On the other hand, the violin strings are under more tension. That is why this instrument has higher pitches, while the cello’s ones are lower and more profound.

When it comes to tuning the violin, strings tunes go on the following order from the thickest to thinnest strings G, D, A, and E. On the other hand, you should tune the cello form thickets to thinnest string (A, D, G, C). Another thing to consider is that the violin’s G is a full octave and higher than cello’s G.

As for the bow, makers use mostly the same tropical wood for construction and horsehair for strings. The horsehair is delicate and originates only from selected breeds.

The difference in sound is more about cooperation than confrontation. For instance, the choir has sopranos, the higher voices, and the basses and tenors for the deep and lowest voices. Together they sound profound, melodically, and wonderfully.

The same is with the violin and the cello. The violin can perform melodic and virtuous high pitches while the cello can fill in the melody with lower tones and make the base for the violin.

That is why the violin quartet sounds so beautiful. The viola and cello give deeper lower tones while two violins play with the higher ones.

The violin has a specific way of holding it. Right-handed people will place the violin on their left shoulder, placing the chin on the specially designed place for it. They will also keep the stings facing the ceiling.

In such a case, the bow should be in the right hand. For the left-handed people, the situation is quite the opposite. The bow is in the left hand, and the violin is on the right shoulder.

However, you can choose different positions in playing the cello. Usually, the cellist sits with the instrument between knees and simultaneously keep it firmly based on the floor.

The top part of the instrument should be placed right of the head if the cellist is left-handed, and vice versa, if he or she is right-handed. The instrument is in front of the player, and strings face the audience.

The bow should be in the dominant hand. Some cellists like to play standing, which is highly attractive and dynamic for both audience and performer.

The violin is smaller and more practical to transport compared to the cello. It has a suitcase which you can easily take in your hand and carry it lightly. Since it is a light instrument, the violin move won’t be a problem.

On the other hand, the cello is pretty big and not so easy to carry. Although it also has an adequate suitcase, it is not that convenient and practical to take it in hand and enter it into public transport. However, if you look for the way to stay fit, carrying the cello around will help your cause.

When you look at the prices, you will realize that the cello is more expensive than the violin, as you have probably guessed. It is logical since the instrument maker needs more wood, horsehair, and other materials to make the cello.

However, the price is not much higher. It all depends on the instrument quality and maker. Keep in mind that age and condition are crucial if you plan to buy a used instrument. The price will also vary depending on the level of playing you have reached.

No matter which instrument from the violin family you pick, its beauty and elegance will inspire you to practice regularly. They are considered to be European Baroque-style instruments, but they have remained to be popular even now. You should listen to both instruments playing the genre of music you like before deciding which one is your favorite.