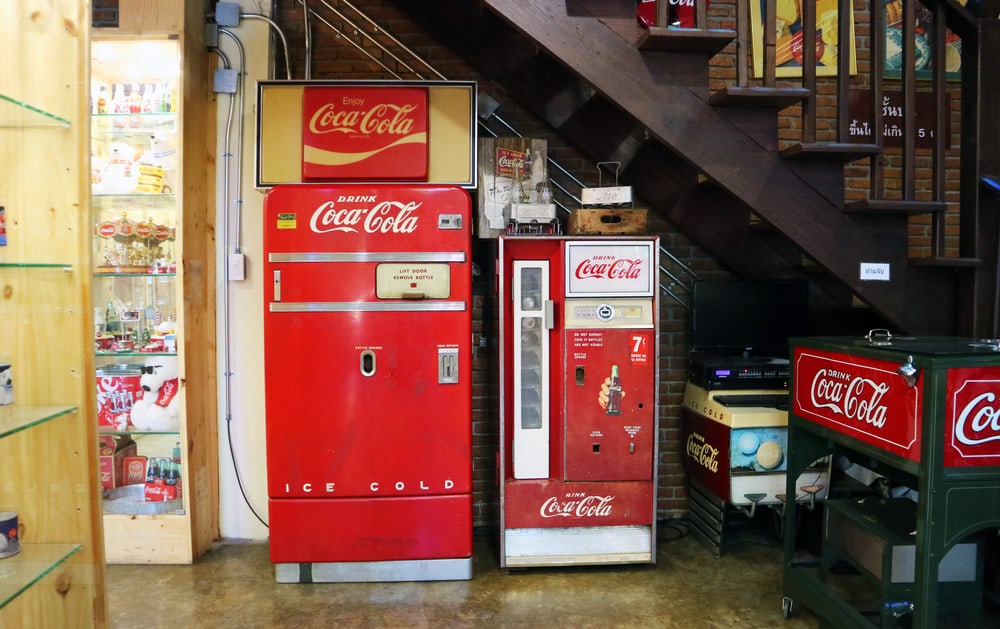 Coca-Cola is one of the world’s top ten most recognizable brands, sitting between number five and eight on different global lists.

But if you consider that all the companies above it are tech-based and were founded no earlier than the 1970s, Coca-Cola has been the world’s single most recognized brand for the entire second half of the 20th century.

The iconic red and white logo—which has remained the same since it was first penned in 1887—has long come to symbolize the triumph of American capitalism and is synonymous with consumer culture.

For this reason, Coca-Cola memorabilia continues to be some of the most popular and prolific, with collections, auctions, clubs, and sales all still very active.

Today, we look at the beginnings of Coca-Cola and how it came to enjoy such ubiquitous notoriety, the history of Coca-Cola collectibles, their value, and where to buy and sell them.

A Brief History of Coca-Cola

The Coca-Cola Company was formally incorporated in Atlanta, Georgia, by Asa Candler in 1892.

However, fellow pharmacist Dr. John Pemberton first created the recipe for coke syrup in 1886 by mixing it with carbonated water.

Pemberton and his partner Frank Robertson were the engineers of Coca-Cola’s first-ever marketing campaign, which consisted of nothing more than the scripted Coca-Cola logo and a few hand-painted placards tempting passersby to ‘Drink Coca Cola.’

Unfortunately, Pemberton passed away two years later and was not around to see the astronomical success his soft drink would have once the company changed hands.

After buying the trademark recipe for Coke, Asa Griggs Chandler began a targeted, aggressive, and ongoing marketing campaign the likes of which American society had never seen before.

He began producing servings trays, toys, trading cards, coolers, calendars, posters, pins, pens, and myriad more trinkets and memorabilia items through promotional advertising campaigns. Their advertising was about more than just the product; the brand itself represented a lifestyle.

At the height of its popularity and prominence, Coca-Cola was symbolic of progress and good times, repeatedly underscored by the words’ delicious’ and ‘refreshing.’

This interplay between identity and psychology is nothing new in modern marketing. Still, it was unheard of at the time, paving the way for Coca-Cola’s staunch popularity throughout the century.

Over the years, campaign after campaign has targeted every facet of American life—from the Super Bowl to female empowerment—producing thousands of limited edition items for which today’s collectors would pay top dollar.

Additionally, changes to production facilities and other evolving factors have caused Coca-Cola to change its packaging, advertising, and products multiple times, creating even more memorabilia to collect.

It’s no wonder a company with a 135-year history of non-stop ads has created the largest market of memorabilia collectibles in the world, with some of the most ardent and passionate collectors out there.

Two years later, the Illustrated Guide to the Collectibles of Coca-Cola and the first (of 12) edition of Allan Petretti’s Coca-Cola Collectibles Price Guide officially turned the amateur interest into a serious hobby.

A group of collectors formed a fan club in 1975 and had grown to over 8,000 members by 1986 when they were officially allowed to use the trademark name Coca-Cola to identify their club.

Today, the Coca Cola Collectors Club has more than 40 local chapters all over the United States and Canada and in Europe, the middle east, and Asia.

According to the Guinness World Book of Records, Debbie Indict of North Carolina holds the record for the world’s most extensive collection of Coca-Cola collectibles at a whopping 2028 items.

What are some Coca-Cola collectible items?

There are thousands of them.

Collectors generally consider items produced since the company’s inception until the 1960s most valuable, though some will collect Coca-Cola memorabilia from all periods.

But don’t let that fool you into thinking vintage Coca-Cola memorabilia doesn’t garner fierce competition during a bidding war in an auction or online marketplace.

Some Coca-Cola items are highly sought-after and will bring in tens of thousands of dollars.

Coke bottles might be the first thing that comes to mind when thinking of Coca-Cola collectibles. Still, according to the company’s website, “even the earliest of the contour bottles are not terribly valuable because the bottles were produced in the millions.”

But that doesn’t mean that none of the older bottles have value.

While any old Coke bottle may not be rare, a pre-1900s Hutchinson bottle in excellent condition can cost up to $2000.

Certain prototype bottles have sold at auction for exorbitant prices—like this Coca-Cola Root Glass Company Bottle— which sold for $214,000 in 2011.

You can even watch the final minutes of the dramatic auction, a record-breaking auction.

Though not as simple as walking into a flea market and picking up a trinket, vintage Coca-Cola vending machines are also some of the most valuable collector’s items.

The Vendo brand of machines from the 1950s bring in the highest value, but any of the company’s soda machines—even in a state of disrepair—can still cost between one and ten thousand.

Coca-Cola’s decorative servings trays were a crucial part of their advertising campaigns and usually depicted a young person enjoying a bottle of Coke.

These trays were made of tin and thus easily reproduced; however, you can buy originals for about $75, with special editions like this Norman Rockwell tray selling at auction for $1610 in 2010.

From the mid-1930s onward, artist Haddon Sundbloom created a rendition of a jolly Santa Claus, which featured Coca-Cola’s holiday line.

Some of Coca-Cola’s most valuable holiday collectibles featured Sunbloom’s artwork.

During the 1940s, Coca-Cola began using photographs for its calendars rather than pictures, with vintages in good condition still going for around $40.

Amongst the plethora of items the company produced over the decades, other notable Coca Cola collectibles are:

How can you tell if a Coca-Cola collectible is valuable?

To differentiate a genuine Coca-Cola item from the reproductions, consult the newest edition of the guide mentioned above and carefully inspect and match the company’s markings on your item with those in the directory.

Any fading or scratches, rips, dents, or chips will also depreciate the value of any potential collectible item.

Below, we’ve broken down the different categories you can expect to find most Coca-Cola memorabilia, along with estimations of their value.

Where to buy and sell coca-cola collectibles?

The days of driving thousands of miles to attend a convention or admire a particular collection are long behind us.

These days, many collectors—especially new ones—meet and chat on the internet and prefer to show off, browse, buy, and sell their collectibles through the various marketplaces for online antiques.

Whether you like it or not, the reality is that outside the very highest levels, most antique sales and purchases happen online.

You’ve probably heard of many of them, but here is a list of online stores, auction houses, and marketplaces where you can buy and sell Coca Cola collectibles:

How about a Coke?

There is a pleasure that some derive from collecting memorabilia that not everyone will understand.

Certain parts of history and culture draw attention for different reasons. Still, we don’t need to think hard about why Coca-Cola collectibles, spanning a century of American life, are still some of the most popular today.

Am I the only one who feels like having a Coke?

Have something to say? Please leave us a question or comment below.