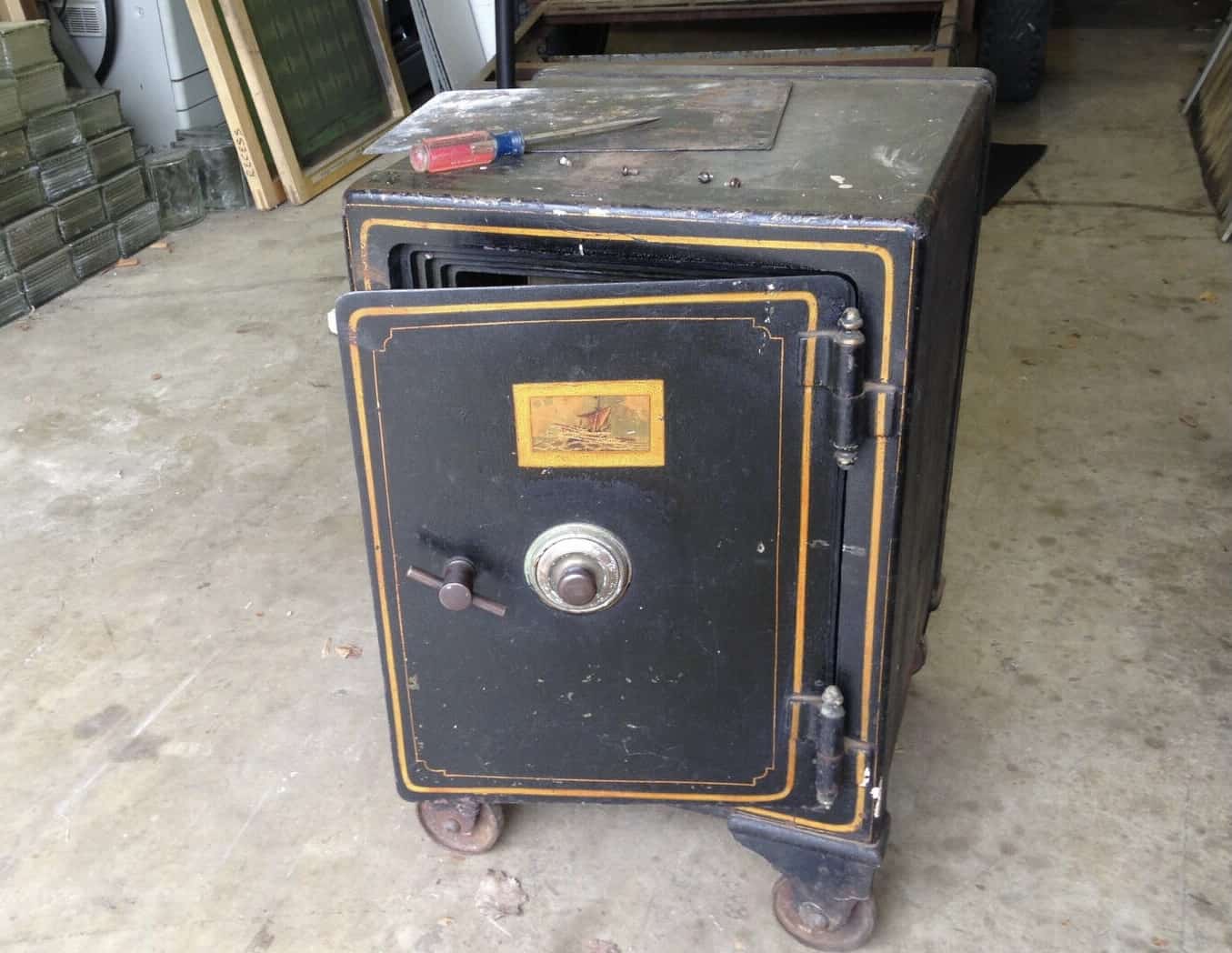 If you’re an antique fan looking to buy a safe that can protect your valuables from burglaries and fire, you should consider getting a Diebold safe. This company was the first to introduce many security features that are found in nearly every modern safe.

In this article, we’re going to talk about everything regarding antique Diebold safes, including the company history, a step-by-step guide on opening a safe, the most popular Diebold safe models, and much more.

Diebold was founded by German immigrant Charles Diebold in 1859. At the very start, Charles employed 250 people and manufactured bank vaults and safes. The business was going well, but it boomed in the 1870s, specifically following the Great Chicago Fire of 1871.

There were almost 900 safes in the fire, and they stored nearly the only property that wasn’t destroyed during the fire. It was a great story to use in advertisements, and Diebold became an industry-leading company.

How to Open a Safe Combination Diebold?

All types of Diebold safe models are opened with the same basic technique, but there are several nuisances that might vary depending on the model. Regardless of the model, you always have to rotate the dial at least five times before attempting to enter the code.

The general steps of opening a Diebold safe are the same, so for example let’s say you have a 5-digit combination code:

Depending on the model, you might only have a 3 or 4-digit combination, then you have to start with 3 or 4 rotations for the first number of the code and then continue with one less rotation for every subsequent number of the code.

Some safes also require you to alternate between rotating clockwise and counter-clockwise. If you’re unsure about how to unlock the safe, it’s always best to contact your local locksmith.

Diebold is most known for its industrial safes and bank vault doors. Some of them were even custom-made according to the bank’s demands. However, they had also cracked the general consumer market and made smaller safes designed for personal use.

There are simply too many models to mention them all, but some of the popular antique Diebold safe model lines include:

This model line included secure safes for general consumers and small businesses. They were relatively compact, especially compared to vaults made for banks, but were still resistant to burglaries.

For additional security, the locking mechanisms were protected by ¼-inch thick drill-resistive steel plates that were 3-inch thick at the edges. Some of the most popular models were as follows:

These were small safes for those that didn’t have too many valuables to store. In a 1937 catalog, Diebold stated that these models:

These two models were among the most popular in the Cashgard Chest line. They featured a special compartment accessible from the top of the safe that was advertised for “Daily Receipts”.

Because of that, Diebold recommended these models for grocery stores, theatres, and box offices, as the cashier could safely and quickly store daily profits in that vertical compartment.

It also had a bigger, second compartment for storing cash during the night. The models differed in size, with No. 1180 having an outside height of 19 inches, and No. 1181 having a height of 25 inches.

This Diebold safe line consisted of models specifically designed to protect paper records from a fire. Naturally, they were fire-resistant and could withstand extreme heat. Some of the models in this line were as follows:

It had 4 vertical compartments, the lowest being the tallest.

Another popular model was No. 44, which was much taller, with an outside height of 62 inches and an inside of 50 inches, but having the same width and depth as the No. 42 model.

This model had 9 compartments of varying sizes and shapes, some of which were vertical.

Other popular Diebold safes include The Commercial and Electric Rekordesk Safe lines.

How Old Is My Diebold Safe?

It’s difficult to correctly identify the age of an antique Diebold safe. Your best bet is to contact a local antique shop or locksmith to see if they could take a look at your antique and help you date it.

However, nearly all Diebold safes have embossed maker’s mark, which can be located pretty much anywhere on the safe, but most likely you’re going to find it on the inner side of the door, or at the back of the safe.

Diebold maker’s mark is an embossment with the company’s name that changed throughout the decades. Because it’s known when Diebold changed its name, it can help you roughly estimate the age of your Diebold safe:

Additionally, you can find embossments on the safe lock, which usually says the patent number that you can look up online to see when it was patented.

Antique Diebold safes vary in price drastically, some being sold just for $100, while others fetching 4 or even 5-figure sums. With so many different models being made throughout the years, it’s impossible to list the value of every single Diebold safe.

However, we can take a look at the factors influencing the price of a Diebold safe, so you get a rough idea of what determines the value:

It’s simple as that, some models of Diebold safes are valued more than others. It’s usually because some safe models are huge and were made for banks. Naturally, such big safes are going to cost more than smaller safes intended for consumers.

Also, some models are more secure than others, which also means they’re more valuable.

Antique Diebold safes aren’t bought by antique collectors to be displayed in their rare collectible collection. People are buying them to use in practice and protect their valuables from being stolen.

As a result, functionality influences Diebold safe price much more compared to other antiques that aren’t supposed to be used. Safes in working order are almost always going to be more expensive than those needing repairs.

Antique Diebold safes are still antiques, and there’s a rule of thumb applying to all antiques; the older the item, the more valuable it’s going to be. In general, Diebold safes from the 1890s are going to be much more expensive compared to those made later.

Another rule of thumb that applies to all antiques is that the better the condition of the item, the more valuable it’s going to be. Even the biggest and oldest Diebold safes aren’t going to sell for much if they’re noticeably damaged.

Now we can take a look at a couple of antique Diebold safe listings so you can get an idea of their value: 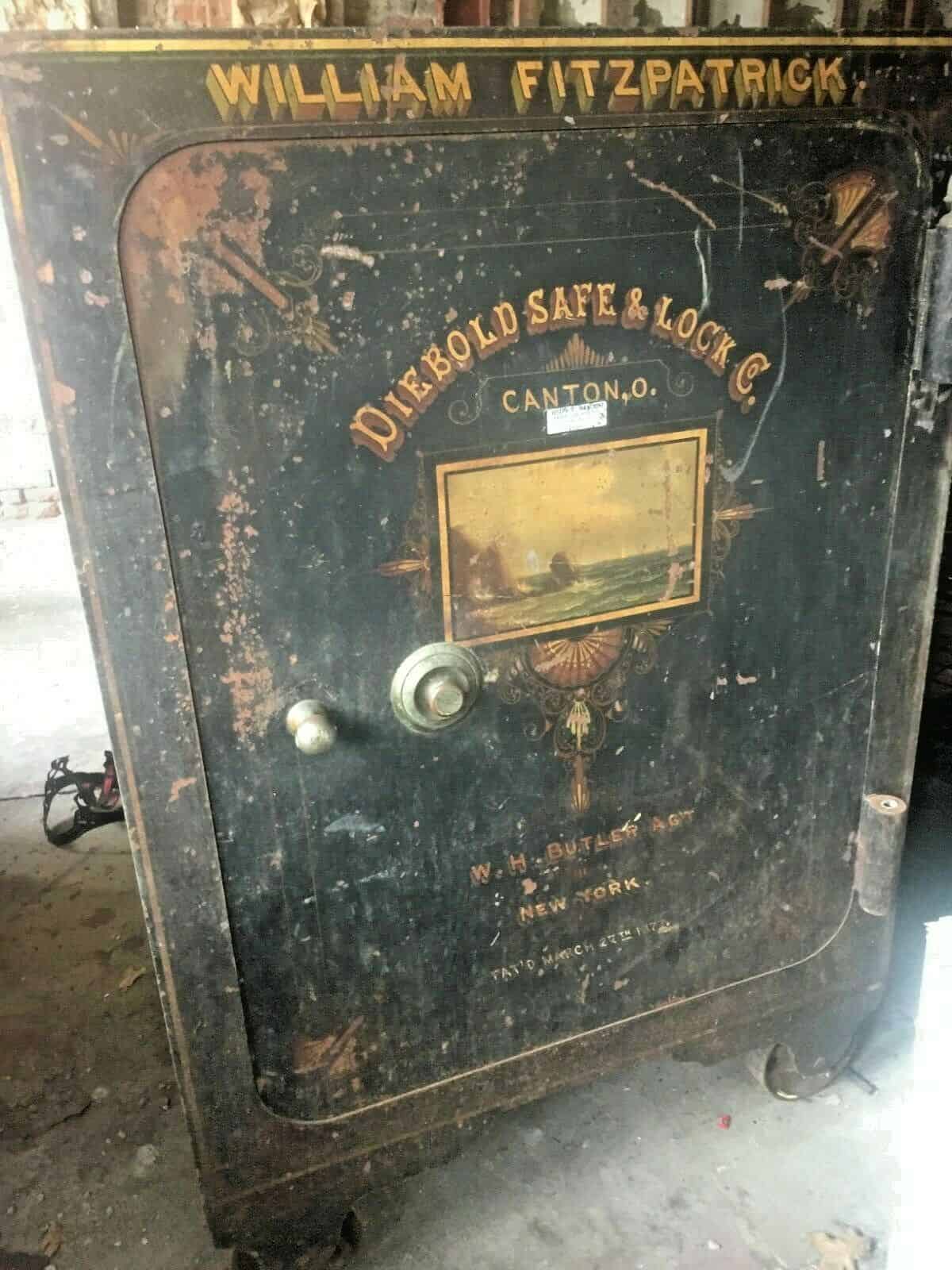 This listing offers one of the oldest Diebold safes out there. As expected, its condition isn’t the best, and it’s damaged, starting from peeling paint to a missing knob. Regardless of that, it’s asking for $700. 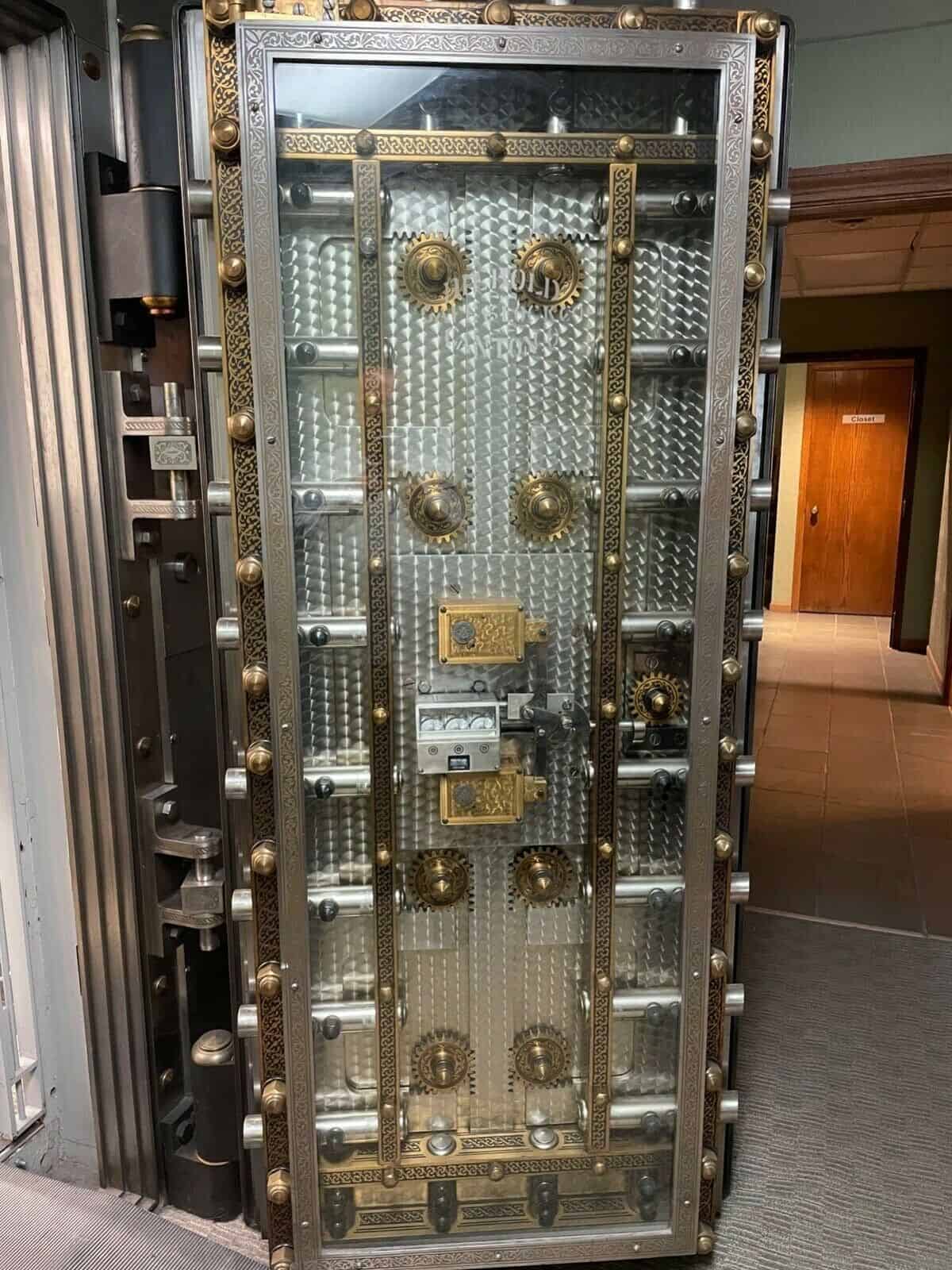 It’s an 82-inch tall 9,400-pound bank vault door that was used by a former bank. It’s in excellent condition and features a tempered glass cover and artistic adornments.

As you could see, the value of Diebold safes varies drastically and has to be determined on a case-to-case basis.