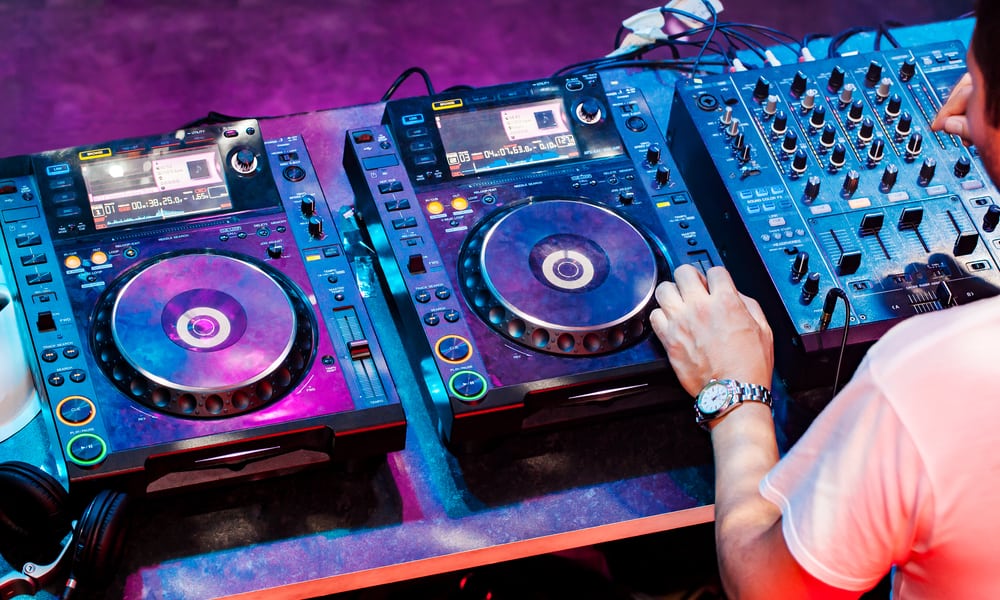 If you’ve ever seen the elaborate stages that are constructed for the major dance music festivals each year and the thousands of ecstatic fans dancing in front of them, you can’t fail to have realized that there must be serious amounts of money sloshing around.

So it follows that the DJs who draw in these crowds of fans must be taking a decent cut because without them there would be no party. But are they as filthy stinking rich as you imagine? Here I reveal all as I answer the question, how much do DJs earn?

If you’re looking for a preview of some of the stuff I’m going to be talking about, you can check out this video before reading on.

Life as a raw novice DJ is a thankless existence. You spend most of your time playing tunes in your bedroom while dreaming of performing in front of other people, and for many, the only way out of this misery is to play gigs for free.

Yes, it’s not ideal, but you have to cut your teeth somewhere, and not many venue owners are going to spend cash paying an untested DJ.

But look on the bright side, you’ll be picking up valuable experience and exposure, and from there, it’s surely only a matter of time before you start getting paid for it.

You’ve agreed to play in a bar for free for a few weeks, but the event seems to be going well and the boss agrees to pay you for your time. You might not be earning a fortune – or even a fair wage – but you’re getting paid for DJing for the first time ever. You’re no longer a virgin.

The time you put in working the bar circuit has paid off and you’ve started getting booked to play in bigger clubs. You’re not going to be on superstar rates, but at least you’re getting paid a fair hourly rate.

How much you earn will depend on where you live, but in a big US city like NYC, Miami or LA, you should be looking at between $50 and $100 an hour. That means if you’re playing a four-hour set, you could be earning up to $400 a night.

That might sound like a lot, but if you’re only playing once a week, you’re not going to be able to give up your day job. Still, at least you’re making progress – and if you can find more than a couple of gigs a week, it’s looking like you might be able to make a career out of it.

When you bought your first pair of beaten up old decks and a second-hand DJ mixer, you probably weren’t dreaming of spinning tunes for dancing grannies and taking requests from the embarrassing drunk uncle at weddings, but for some people, it’s a way to make ends meet.

This is a bit different from being a club DJ because, although you may earn more money per event, you also need to provide the equipment, you need to set it up and take it down, and you also need to offer a certain level of service to your clients in terms of prep time.

This means you can charge up to $1000 per gig and more – but this covers a lot more than just turning up and playing your set in a club.

Still, it’s a way to make money, and some people love it, so if that’s what you enjoy, go for it!

If you manage to score a residency in a well-known club, you may start earning a bit more. You won’t be the headliner, but your name will be associated with that club and you can expect a bit more as you become better known. Expect to be making around $500 or more per night.

Whether you managed it through the skillful manipulation of social media, through music production or purely through your unrivalled talent on the decks (unlikely), you’ve gained prominence nationally and even internationally.

You no longer have to chase gigs; the promoters and venue owners are starting to come to you. By this point, you’re still quite a few rungs below the big-time, but you’re making a comfortable annual salary and you can now call this a real career.

One of the paradoxes about reaching this level is that you start getting paid more money for playing shorter sets. So instead of earning $500 for four hours, you’re now on $1000 for just two.

You’ve almost reached the top. You’re not headlining the big festivals, but you might be getting booked on the second stage – or even being given your first taste of main stage action during off-peak times.

You’re not A-list DJ royalty yet, but you’re getting close. And you’re now earning the kind of money that proves it.

It’s hard to say how much the top earners get paid for each gig, but for the most in-demand DJs headlining the biggest events, it wouldn’t be impossible to earn $1m for an hours’ work.

This is an almost obscene amount, but DJs at the absolute pinnacle can command exorbitant fees.

Add to this other income streams from production or other work and we’re talking about some extremely rich individuals.

Calvin Harris, for example, is thought to have made in the region of $50m a year for several years running. Tiësto, who has been an A-lister since before most of the kids he’s playing to now were old enough to go out dancing, is worth an estimated $150m.

Not bad for playing a few tunes

DJing is a funny profession because the difference between what someone starting out earns (nothing) and the people at the other end of the scale is vast.

To be honest, at the beginning of your DJing career, you shouldn’t expect to anything like those rare big beasts – but at the same time, when they first spinning tunes, they probably didn’t expect to be earning millions of dollars either…so you never know.