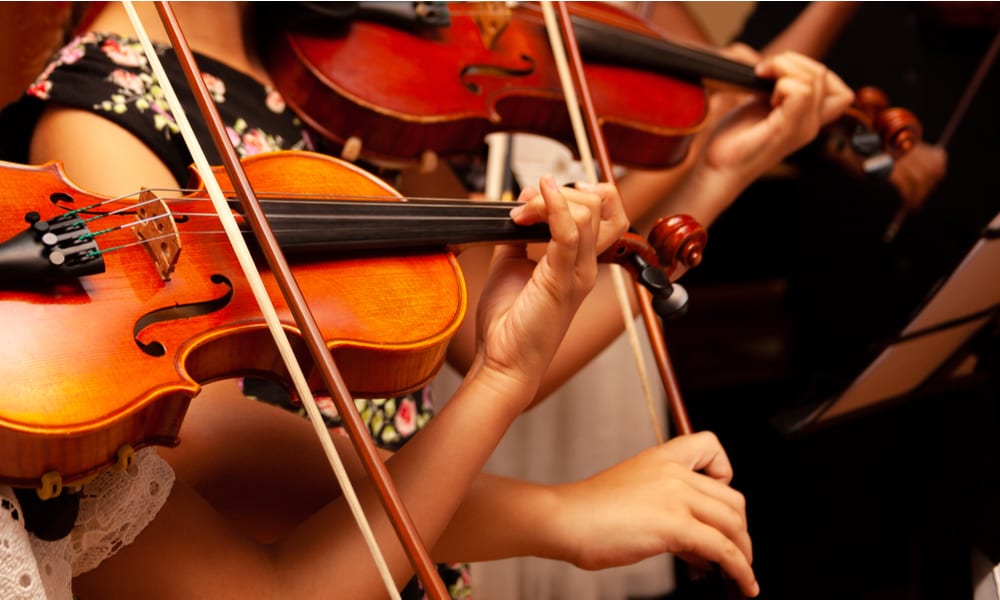 There is an old joke among musicians saying – What is the difference between a fiddle and a violin? The answer is – You don’t spill the beer on the violin. The truth is it is hard to tell these two instruments apart at first glance.

In fact, you will hardly spot any difference if a fiddler and a violinist bring you their instruments to inspect. Believe it or not, they are practically the same instrument, and the primary distinction between the fiddle vs. the violin is the way of playing. Let’s see.

The Fiddle and Violin Definition

The violin is the tiniest member of the string instruments family with a bow that includes the viola, cello, and double bass. This elegant instrument’s name originates from the Latin term vitula that refers to a small stringed instrument. The funny fact is that you can translate this medieval Latin word as ‘heifer’ in modern Latin.

As for the fiddle, many music experts will tell you that it is actually a violin for playing folk music. It is assumed that the word ‘fiddle’ comes from the Anglo-Saxon term fithele. Both the fiddle and the violin are descendants from the Byzantine Lyra, but the first violin appearing in the present form was made in Italy in the 16th century.

Some players use the words violin and fiddle as synonyms, while others disagree and note that the term ‘fiddle’ can mean several different things:

The New Grove Dictionary of Music and Musicians shows that you can use the term ‘fiddle’ for every string instrument playing with a bow. Thus, this definition includes the violin, the one-string goge of sub-Saharan Africa, and Indian sarangi.

There is almost no difference between the fiddle and the violin if you look only at the physical appearance. The most important parts of the instrument, including body and neck, are entirely identical.

The bridge is the detail that defines which instrument it is. It is a small piece of wood that holds strings raised from the instrument body. The violinist will always choose to play on the violin’s unaltered bridge while the average fiddler prefers using the carved, flatter bridge.

Once the musician reduces the angle between the strings and the fiddle’s body, the player can play multiple notes at once. Plus, many fiddle players avoid the synthetic strings the violinist use.

Nowadays, you can purchase the instrument that mainly refers to the violin or fiddle. Manufacturers design a flat bridge for the modern fiddles, which allows them to perform quick string crossings, change of rhythm, and chording.

One of the essential distinctions between the fiddle and the violin are the string types. The majority of violinists playing classical music use the instrument with synthetic polymer strings.

Contrary, the fiddlers choose to use steel strings on their fiddles to produce sharper tones than the violin. Plus, this type of instrument can have more than four strings. The example is South Asian fiddle, also known as sarangi.

This instrument usually has two to three dozen strings, including three melody ones and up to 37 sympathetically vibrating ones.

Nowadays, you can find the five-string fiddle on the market. Famous American bluegrass musician Bobby Hicks first played five-string fiddle in 1963 at a performance in Las Vegas. Moreover, with the development of technology, electric violins with six or even seven strings appeared.

Typically, the violin is an association with classical music, symphonies, and chamber music. That means you can mostly hear the violin at formal events such as an opera, concert, or wedding reception.

On the other hand, the fiddle symbolizes cheerful, rhythmic music that calls for dancing. Therefore, many people associate fiddle with casual dances, parties, festivals, and folk music.

There is one more thing! When you play the violin, you will do it in a company with other string instruments like violas, cellos, and symphonic horns. It is not rare to see 50 violinists playing together. However, your band will probably have a guitar, banjo, drums, or an electric keyboard if you play the fiddle.

The most popular music styles where you can hear the fiddle includes:

The Irish fiddle has a vital role in their folklore. The fiddler plays the instrument fast and uses the vibrato much less than the classical violinist.

This music is energetic and positive, and the fiddle parts have quick notes that change in a snappy rhythm. Interestingly, the Scots also have a big fiddle, which is how they refer to a cello.

Hardanger fiddle (Hardingfelle) is the Norwegian instrument with four or five strings more than the violin. It is also often decorated with carved symbols from Norwegian mythology.

Thanks to the influence of Irish music, the fiddle is highly represented in Cajun, jazz, and bluegrass music, which is highly prevalent in North America.

At the beginning of the 20th century, it was hard to imagine a black string band without the fiddle. Still, the musicians made no strict distinction between the fiddle and the violin. One of the most popular bands of that time, the Mississippi Sheiks, use both terms in the song called Jazz Fiddler.

While there are differences in how professional violinist and fiddlers name their instruments, they agree on one crucial thing. No one can or should play them the same way. More precisely, the way you play a particular instrument defines whether it is the fiddle or violin.

While playing the instrument, the musician uses the bow or plays by the strummed or plucked string. Still, the fiddle playing includes far more improvisation and freedom than playing its classy alternative. The violinist will always read sheets, follow the instructions on tempo, rhythm, and precisely play notes.

If you want to play the violin, you need to follow the composer’s music with accuracy to the last note without any alteration. On the other hand, when the three fiddlers play the same melody simultaneously, each of them brings in music some of his own interpretation. That is also the reason you get to hear the violin in symphonies, but never the fiddle.

Additionally, the fiddlers often play by ear and play two or three notes simultaneously, which classical music violinists never do. The fiddle music also has less volume, and the fiddler uses less string tension, peg tuning, and a fine tuner.

There is also a difference in the method of holding the instrument. You will never see the violinist playing with the violin on his or her chest while many fiddlers chose this pose. The classical violinist always keeps a routine, solemn posture with the instrument between the chin and the shoulder.

Holding the instrument on the chest reduces the playing possibilities of the fiddle, so the musician needs to develop skills to play this way. Keep in mind that this method is also less physically tiring.

Whether you pick out to play the violin or the fiddle will depend on personal preferences. Both have the same clef and use the same tuning and the note range. When you decide to learn to play on a particular instrument, you will also choose the way you play, style, and approach to learning.

Although most musicians can read notes, no matter which of these two instruments they use, the fiddlers generally choose to play by ear. The skills needed to master the instrument to perfection are also different for the fiddle and the violin.

Knowledge about music theory, discipline, and practice are crucial if you want to play the violin. In contrast, playing fiddle seems effortless for many people. However, once you choose this instrument, you will need to master playing multiple notes at the same time, rapid rhythm changes, and the ability to improvise.

Most fiddle players stay in the first position, while the violists use the complete range of sounds. Yet the fiddles perform complicated pieces that require rapid and nuanced movements with bow simultaneously. They need to master playing in a high and low pitch and know violin techniques as broad slides, vibrato, tremolo, or pizzicato.

Depending on whom you ask, the fiddle and the violin are basically the same instruments, or they are not. Although they are visually almost identical, some differences exist, including the number of wires, the material they are made of, and the bridge appearance.

What makes the violin and fiddle entirely different is the way of playing, the style of music performed, and the pose the player takes while holding the instrument.

2 thoughts on “Fiddle vs. Violin: What’s the Difference?”