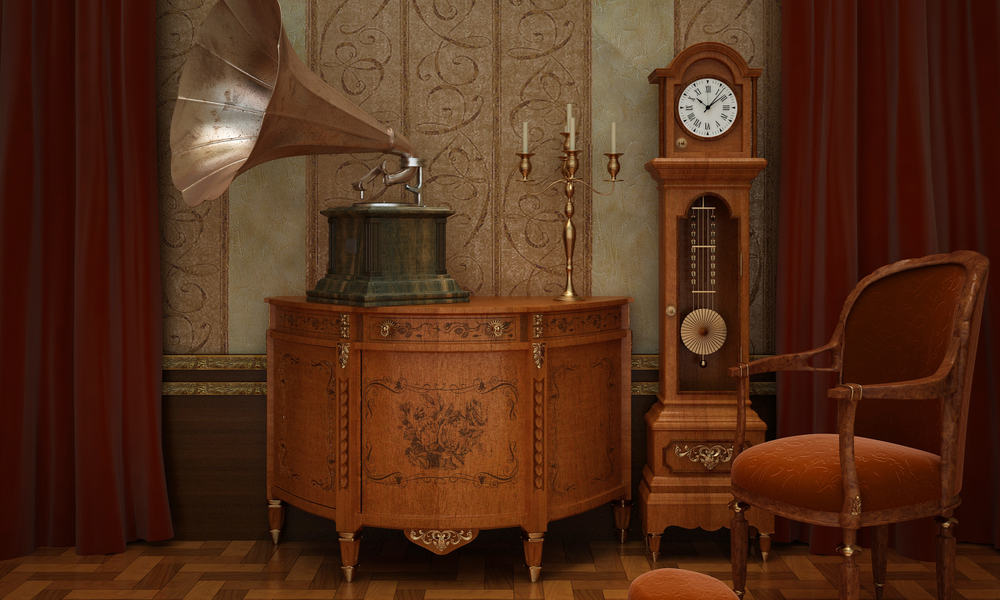 For every collector, furniture stamp identification is the best way of estimation, and finding a stamp, label, or mark will help you determine the approximate manufacturing period. For instance, the earliest machine-cut furniture production started in 1860, so you can be sure that all handmade pieces are antique.

The next thing to do is determine the manufacturer by checking the markings. In most cases, you can effortlessly find a label or metallic tag with the name, location, and production date in pieces produced after the 19th century. Old artisans typically used furniture stamps with their names or identification numbers. 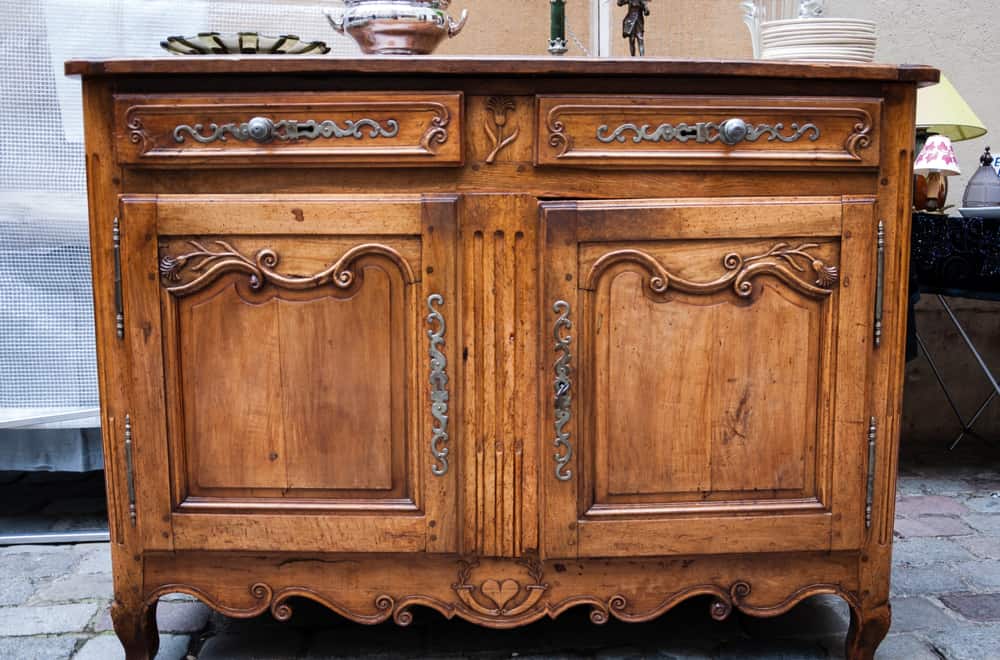 From 1637, artisans needed to mark each piece of furniture they created by placing the brand name and other necessary information on the surface. It was possible to sell only the quality furniture and prevent potential independent workers’ counterfeits.

All signatures you can find on furniture from the earliest period were associated with the guild system since its making required the cooperation of several artisans. For instance, a creator (ebeniste) often needed the help of an engraver, sculptor, metal worker, caster, and gilder.

They typically belonged to different guilds and needed to follow strictly established rules. The so-called JME stamp was obligatory from 1743 to 1790 before guilds were abolished.

Artisans and furniture makers started using personalized furniture stamps in the 19th century. They typically branded their initials in capital letters into the wood with a hot iron to confirm their identification and the place where furniture was made.

Very soon, stamps also became a rough way of advertising. Nowadays, it is estimated that over 1,300 marks were actual from 1895 to 1940. You can recognize stamps of different kinds and sizes, such as those:

The most common places for stamps were the furniture backside, drawers, and seats, regardless of the production period.

Besides the stamp showing their own initials, artisans often used fire marks or ink stamps with castles’ initials. They typically came with inventory numbers, but it was not required. The most common were: 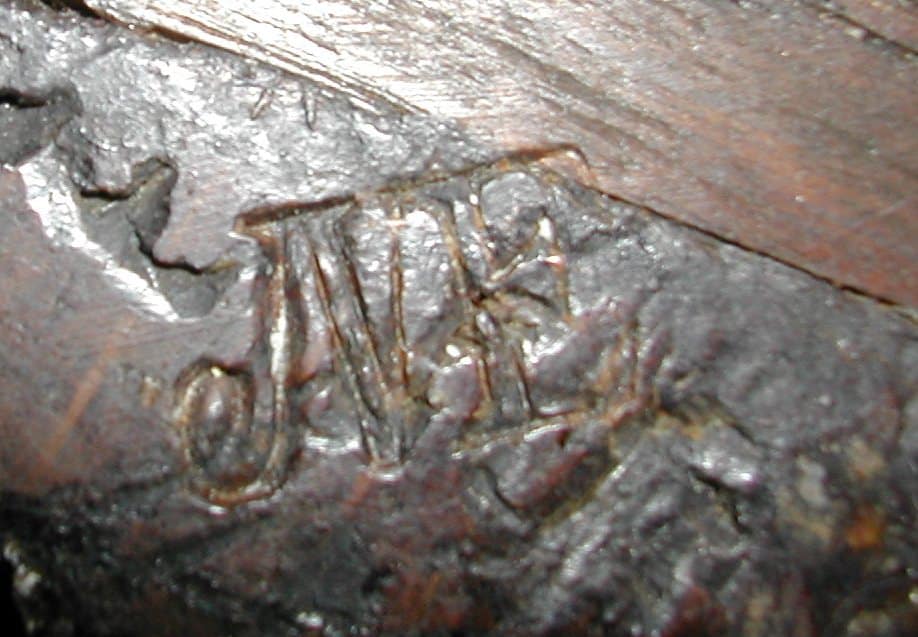 As I have already mentioned, stamps were connected with the guild system. Before becoming master cabinet makers, people began as apprentices in one of the existing workshops.

After several years, someone could become a furniture maker after presenting the best piece to the Jurande. That was a powerful organ that evaluated candidates from belonging guild.

Each approved piece of furniture got a JME stamp, obligatory from 1743 to 1790 when they were canceled at the time of the Revolution.

Furniture Stamp with the Makers’ Marks

When purchasing an antique piece of furniture, the crucial thing is to locate a stamp with the maker’s mark. That will help you determine the production year and estimate furniture value.

Marks on antique furniture made in Britain

Britain didn’t have regulations and strict rules requiring furniture stamps or labels in the past. Therefore, every collector needs to find a rough maker’s mark on a piece of British antique furniture. The most probable places to look are:

Artisans began marking the furniture they produced in the 18th and 19th centuries. They used handwritten ink inscriptions on paper labels or marks incised into the wood in most cases.

If you find a maker’s mark on furniture, the best way to identify it is to look for the information in the book London Furniture Makers. 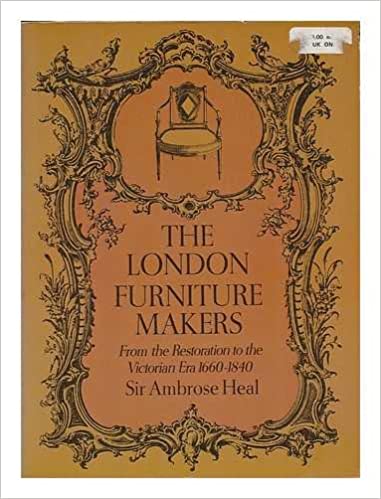 Another option is to check the Dictionary of Furniture Makers in England from 1660 to 1840.

The most popular stamps you can find include:

This famous cabinet maker punched a Gillows. Lancaster stamp at the furniture bottom or inside the drawers. Interestingly, you will often find a list of assistants who participated in producing these antique pieces next to the mark. 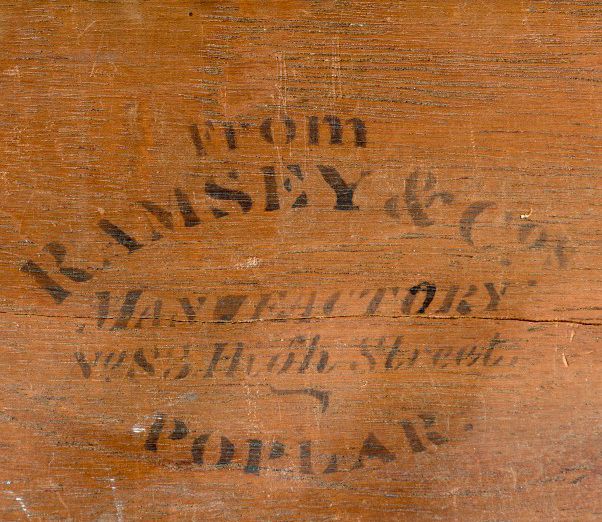 This company created numerous canterburies in the 19th century, with a drawer for sheet music and a carrying handle. Their sophisticated stamps included a long inscription From RAMSEY & CO. MANUFACTORY No. 83, High Street POPLAR, which was pretty complicated and unusual for that period.

Numerous companies produced the Sheraton furniture in the late 18th century. They left their labels on each piece, which often included the previous owner’s name or manufacturer’s mark and location. Since they used paper labels, they have often worn out over time.

Marks on antique furniture made in the US

Unfortunately, it is impossible to identify most early American furniture pieces’ makers. They added an inscription, label, or brand name to the furniture they created in rare cases.

It is also challenging to identify later American antique craftsmen, particularly the earliest ones. However, you can check the marks online at Antique Marks or those stated in Field Guide to American Antique Furniture. 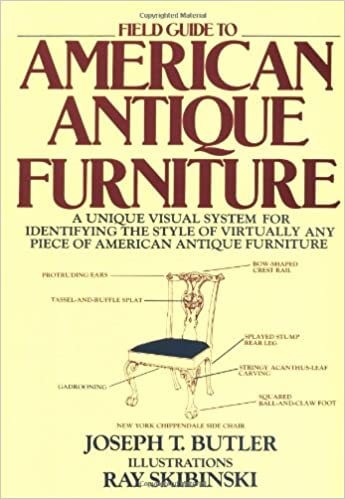 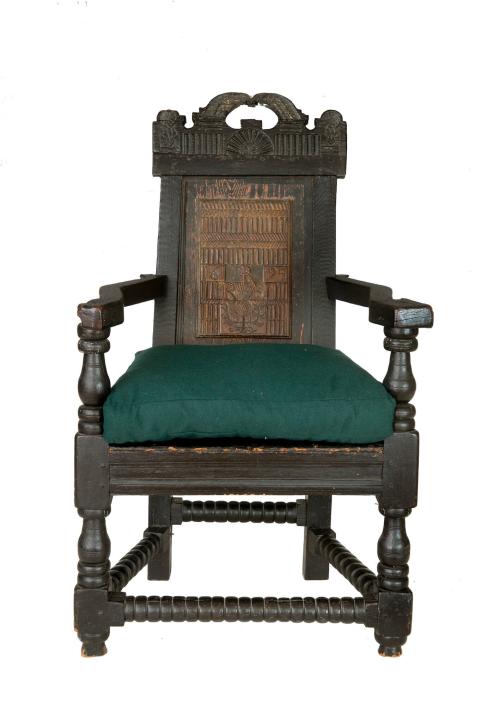 Most experts believe that  Robert Rhea from New Jersey was the first artisan who started adding marks to the furniture he created. A saved joined armchair he made in 1695 features a mark 16 R 95/RI, representing him and his spouse Janet. 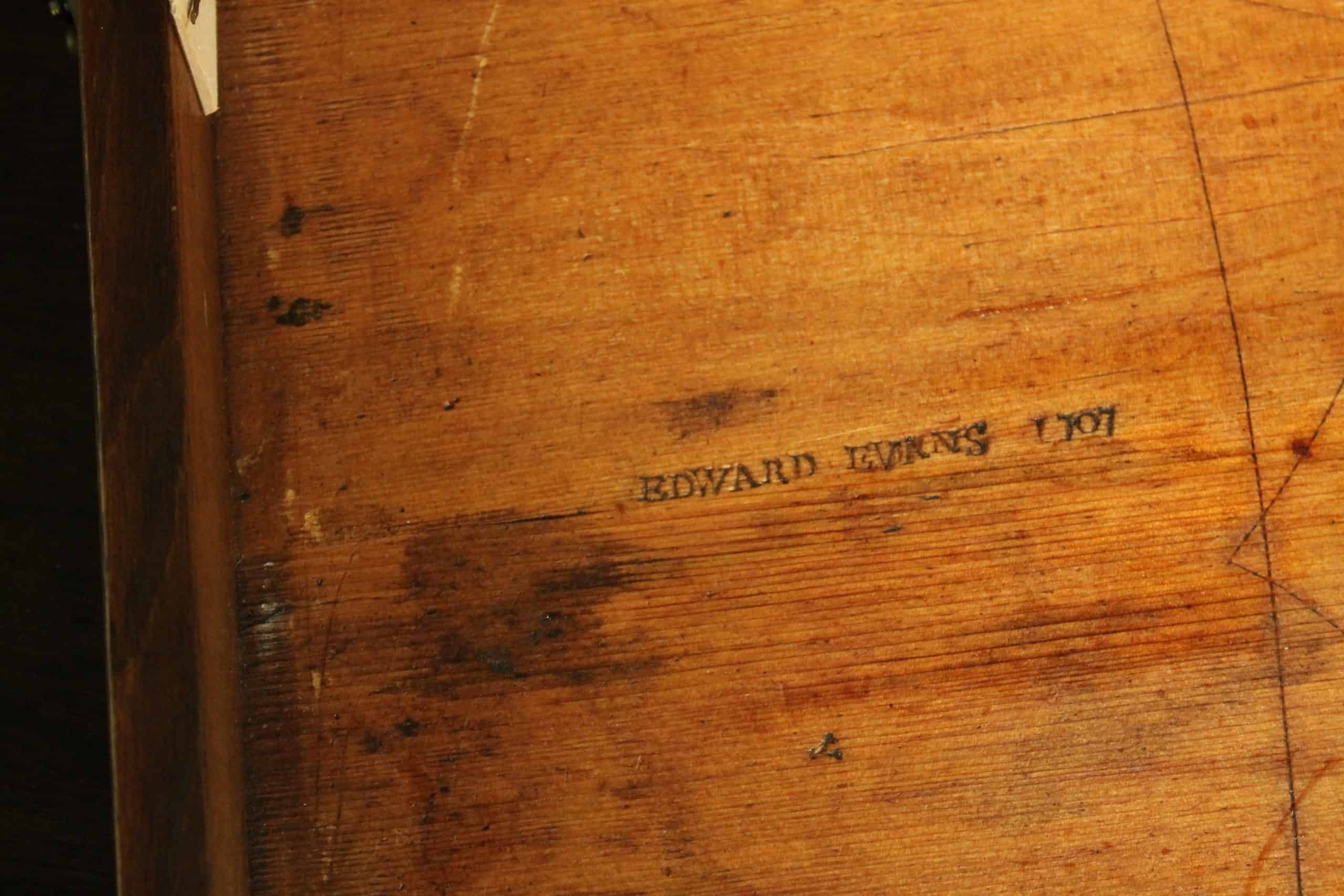 This man created the earliest produced piece of furniture in Philadelphia that still exist. He designed furniture for leading mercantile families in that town and marked them with EDWARD EVANS 1707. 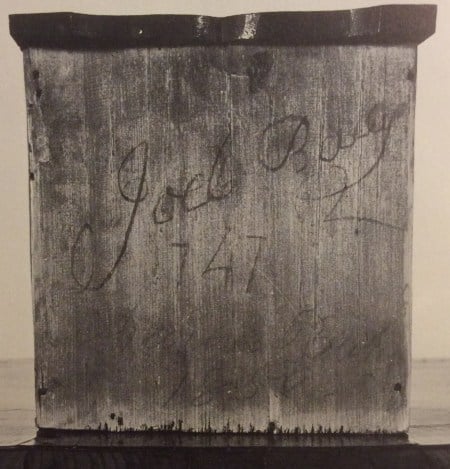 Furniture maker Joel Baily placed his signature on Queen Anne’s secretary desk in 1747. It is possible to find it on the drawer bottom. At that time, the artisan turned 15 years old. 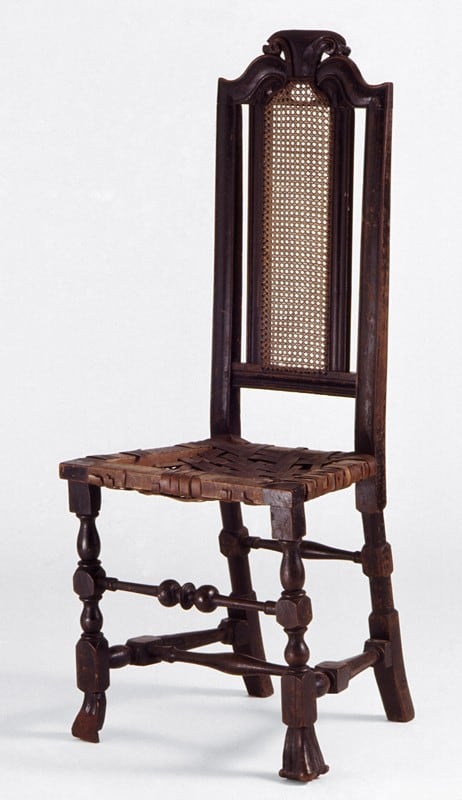 A signature with the letter I and a dash that went through the center was an enigmatic mark this furniture maker left on caned side chair he created. Some experts believe that Edmund, an artisan from Boston, actually wrote two back-to-back Es. He did it in 1709 for the first time. 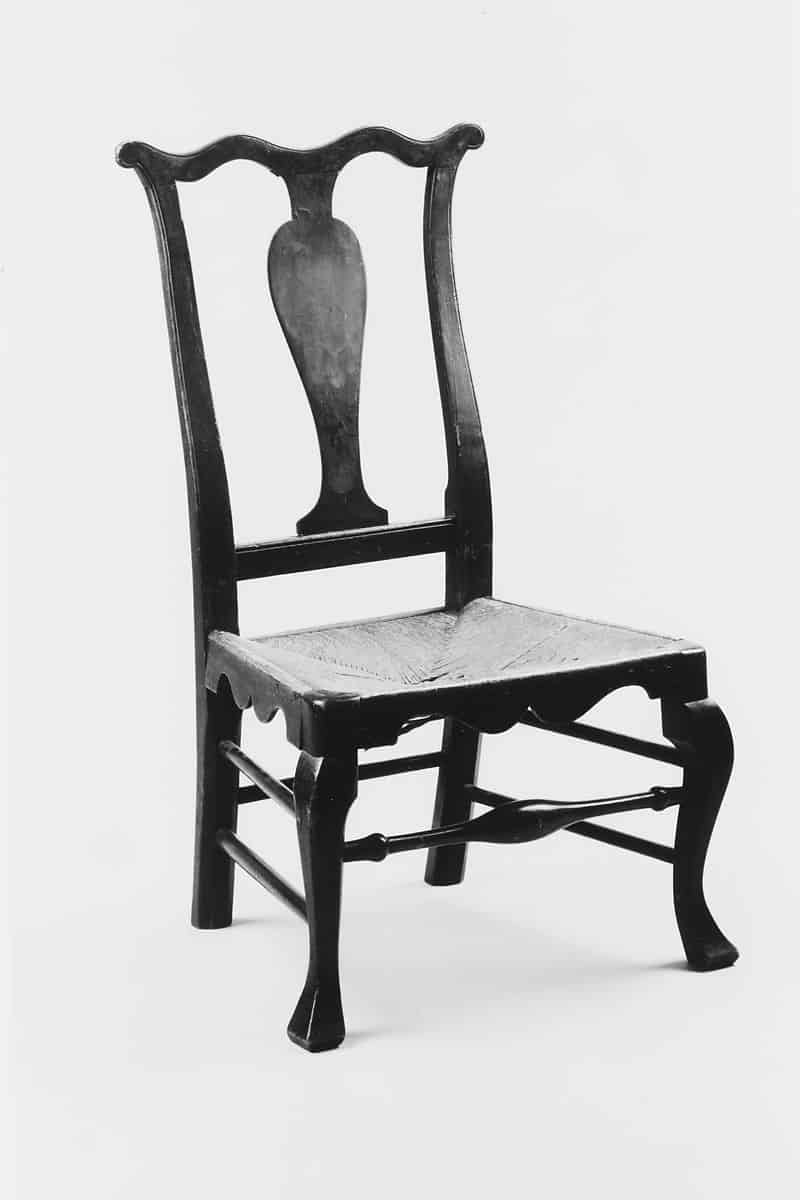 William Savery was a furniture maker from Philadelphia and one of a few who used labels printed on paper. Unfortunately, none of the six paper labels were dated, although it was known that he put them on rush bottom chairs and other furniture. 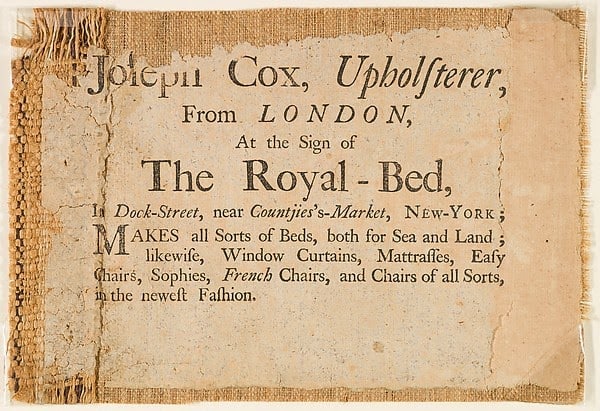 Joseph Cox created furniture from 1756 to 1773 and used a printed label for the first time on one New York sofa’s upholstery. Experts believe it was probably the most ancient printed label one furniture maker used in America. 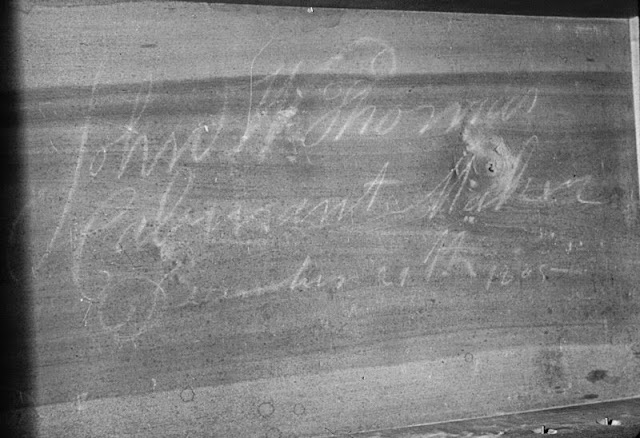 In the 19th century, most signatures you could find on furniture belonged to independent artisans. One of the mysterious signatures was found on a chest-on-frame created in Pennsylvania.

The cabinet maker was John Thomas, who added the date 27 December 1805 to the label beside his name and profession. 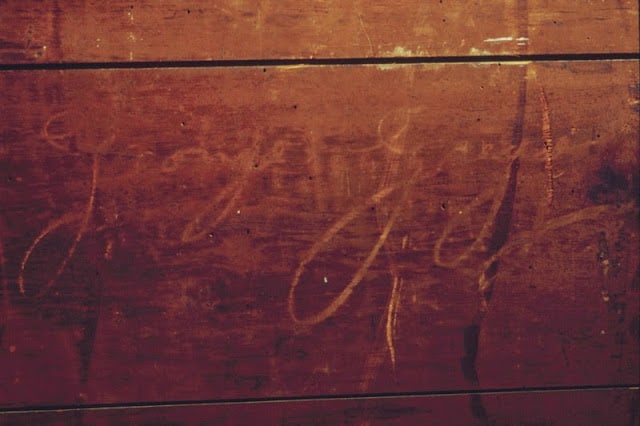 Cabinetmaker George Gregg left a chalk inscription on the backboards’ right corner he created. He produced furniture from the late 18th century to 1819. 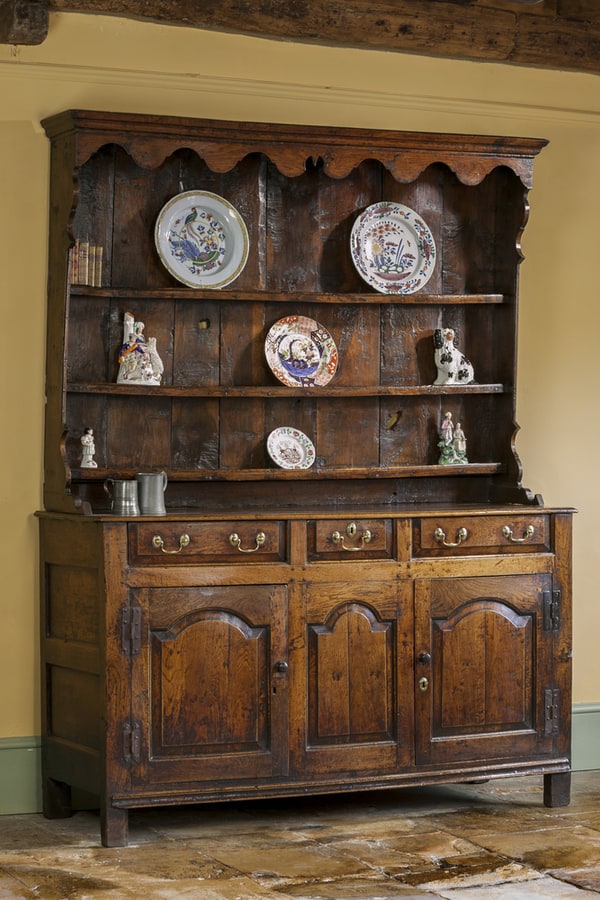 Master artisans, well-known workshops, and corporations used expensive, toughened iron stamps for a long. Since they were hand-hewn from one block, they had a unique size, letter positioning, layout, and used characters.

2. The stamps’ importance to the art market

Stamps were a way of attesting the furniture quality in the past, but they also guarantee the furniture origin on the current market. If you see two pieces of furniture of the same quality, the one with the stamp will be worth more.

On the other hand, two pieces of furniture stamped by the same artisan will be valued based on their decoration richness and quality.

You can find the first judgment related to the upholsterers’ false stamps in documents from 3 August 1761. That is proof that these fake markings date back to the 18th century, but it is tricky to recognize these rare frauds nowadays.

Those who worked from WWII to 1965 used irons cut from hardwood to reduce costs. However, these templates were thicker, not sharp enough, and they left traces, despite the engravers’ skill.

The following false stamps appeared in 1965 and were made of synthetic resins. Counterfeiters used them to take stamp imprints. They were excellent, and only experts could recognize the fraud by using a microscope.

Believe it or not, furniture marked with a false stamp can be worth based on the craftsman’s reputation. The only way for a counterfeiter to create a valuable piece was to make a copy corresponding to the original. In other words, they needed to be educated and capable of adding the appropriate stamp to the copied furniture.

Adding the stamp that doesn’t match to the master craftsman style resulted in worthless furniture. Skillfully counterfeit and appropriately stamped pieces of furniture have their admirers and can be worth some money.

Some counterfeiters involved in the art market decided to invent stamps. For instance, they represented the furniture made from 1965 to 1980 as Dutch pieces manufactured from the 17th and 18th centuries.

This furniture was adequately marked but with false stamps. You can identify them by the jasmine flowers with large foliage encrusted in ivory. To make things worse, buyers could find all these pieces in the sale catalogs. As a result, one of the fictive cabinetmakers, Jasmine, and his furniture became famous.

6. The meaning of contradictory information about the stamp

The best example of stamp importance was the case of one beautiful old Japanese lacquer commode from the Louis XV era. It was marked with BVRB, the artisan Bernard van Risen Burgh’s stamp, dated 1894.

Initials of one of King Louis XV’s principal cabinetmakers were only discovered in 1959. When Mrs. Henry Farman’s estate was put at auction on 15 March 1973, the commode’s estimated value exceeded 1,000,000 francs.

One New York dealer bought and exported this exceptional piece of furniture to the US and tried to re-sell it at Christie’s auction in 1998.

Then, Patrick Leperlier, the French furniture expert, found a royal furniture number on the rear crosspiece. He discovered that the beautiful commode was delivered to the Versailles Palace on 23 January 1745. It was the Dauphine, Maria Theresa Rafaela’s wedding gift.

That increased the commode estimated value to 34 million francs, but no one wanted to buy it because of contradictory information about the inventory number’s authenticity.

Then, the French Museums Laboratory in London analyzed the inscription on the upper crosspiece, and the conclusion was that the ink was identical to those on other royal furniture. The new value estimation was 77 million francs. What a turnaround!

Furniture without the Stamp

Unfortunately, you can’t find a stamp on all antique furniture. Even though such a piece is an antique, checking its authenticity is always challenging. There are a few ways to help you distinguish antique furniture from reproduction, so you should check:

Finding a furniture stamp is the most reliable way to identify an antique piece of furniture and determine its value. Unlike cases when you find a mark or serial number, identifying elements without these markings can be tricky. That makes them so essential for collectors.