Ginger jars are some of the most beautiful and sought-after Chinese antiques you can buy and sell.

Small, delicate, and ornate, they are tied closely with Chinese history and have several features that help verify their authenticity.

Ginger jars make the perfect addition to any porcelain collection, and every day more and more rare finds are rediscovered in thrift shops, yard sales, and old attic boxes.

Today we’re going to show just how valuable your ginger jar could be. As well as that, we’re going to explore everything about ginger jar identification – from dating your piece to evaluating it and educating yourself on how significant these little jars truly are.

Ginger jars are the perfect Chinese antique because they reflected several artistic changes in Chinese culture throughout history. And although they are quite small and made of delicate porcelain, they were made with great attention to detail and high craftsmanship.

The first jars date as far back as the Qin dynasty (221 – 207 BCE). They stored salt and ginger and were incredibly basic in design.

The earliest jars as we know them today, date from the Ming dynasty (1368-1644). They served the same purpose – transporting spices, salts, herbs, oil, and more to the Western world.

Jars had beautiful and intricate designs on their sides and became an instant hit with European audiences. They weren’t used to such high-quality finishes on porcelain ceramics before.

Right until the late 19th century, demands for these jars surged across Europe, transforming them from simple containers into luxurious commodities. It’s here they earned the nickname ‘ginger jars’.

Today, ginger jars are highly collectible because they helped document important cultural and artistic changes in China, and also remain some of the highest quality ceramic, even by modern standards.

The differences between ginger jars and a temple jars

Ginger jars are often mistaken for other Chinese pottery, most notably Temple Jars.

So how can you tell the difference? Here are 5 areas to focus on.

How can you tell if a Chinese vase is antique?

Chinese pottery is incredibly popular nowadays. Manufacturers often imitate their ornate style, colors, and decorations to tap into this interest.

For this reason, there are unfortunately a lot of reproductions on the market, which can confuse and con antique dealers.

Here are some ways to determine if your ginger jar is an antique or a modern-day ripoff.

One of the easiest ways to verify your ginger jar is to find out how old it is. By spotting specific features, themes, and colors, you may be able to work out the likely date of production.

Below is a short timeline of the some of the major dynasties affecting ginger jars:

Speaking of dynasties, it’s common with Chinese antiques to have what’s called a reign mark, which tells you who the Emperor was during production.

A reign mark can help authentic a jar, or immediately discredit it.

They are found at the base of the jar and usually have between 4 or 6 characters.

You can interpret them by using this guide:

These marks are incredibly detailed because they respected the Emperor. They are very hard to reproduce, let alone blend in with the age of the ginger jar.

To make things confusing, however – it was common for Chinese potters to pay reverence and respect to former dynasties, and use older reign marks on their pieces. Often called ‘apocryphal’ marks, they don’t necessarily mean the jar is fake, but they may require a professional appraisal to uncover their true origins.

Most if not all Chinese pottery is glazed. But how the glaze and what style, can pinpoint how old your ginger jar is – and if it’s authentic.

Some common glazing examples include:

Another important thing about glazing is that over time it will age, including slight fading, or an abrasive texture.

If the glaze looks brand new, this might indicate the jar is a modern reproduction or restoration.

How do I know if my antique ginger jar is valuable?

Ginger jars can be incredibly valuable, with some rare pieces easily fetching thousands of dollars in a public auction. One of the primary ways to ensure your ginger jar will sell well is properly authenticating it.

That said, some external factors can affect their value. They include:

As with any Chinese porcelain, the older the ginger jar is the more desirable it becomes to porcelain collectors.

The main period of ginger jars was set in the Ming dynasty, which began from the 1300s to the mid-1600s. The closer your jar dates to the initial dynasty, the more valuable it becomes.

Some examples that show older jars are worth more than modern ones include:

The better the condition, the more valuable your ginger jar will be. Because porcelain is often a delicate material, old jars in excellent condition are considered a rarity.

Cracks, chips, or marks can reduce a jar’s value. So too can discoloration or staining.

The jar’s glaze may also be damaged and begin to peel. There are some antique-acceptable techniques you can do to improve the glazing’s color and texture, but be careful this doesn’t take away from the jar’s antique appeal.

Some ginger jars have an undeniable elegance to them, with elaborate artwork that transforms them into literal works of art. If your ginger jar has interesting artwork, including people, characters from mythology, or intricate floral designs, it will increase in value. Some examples include: 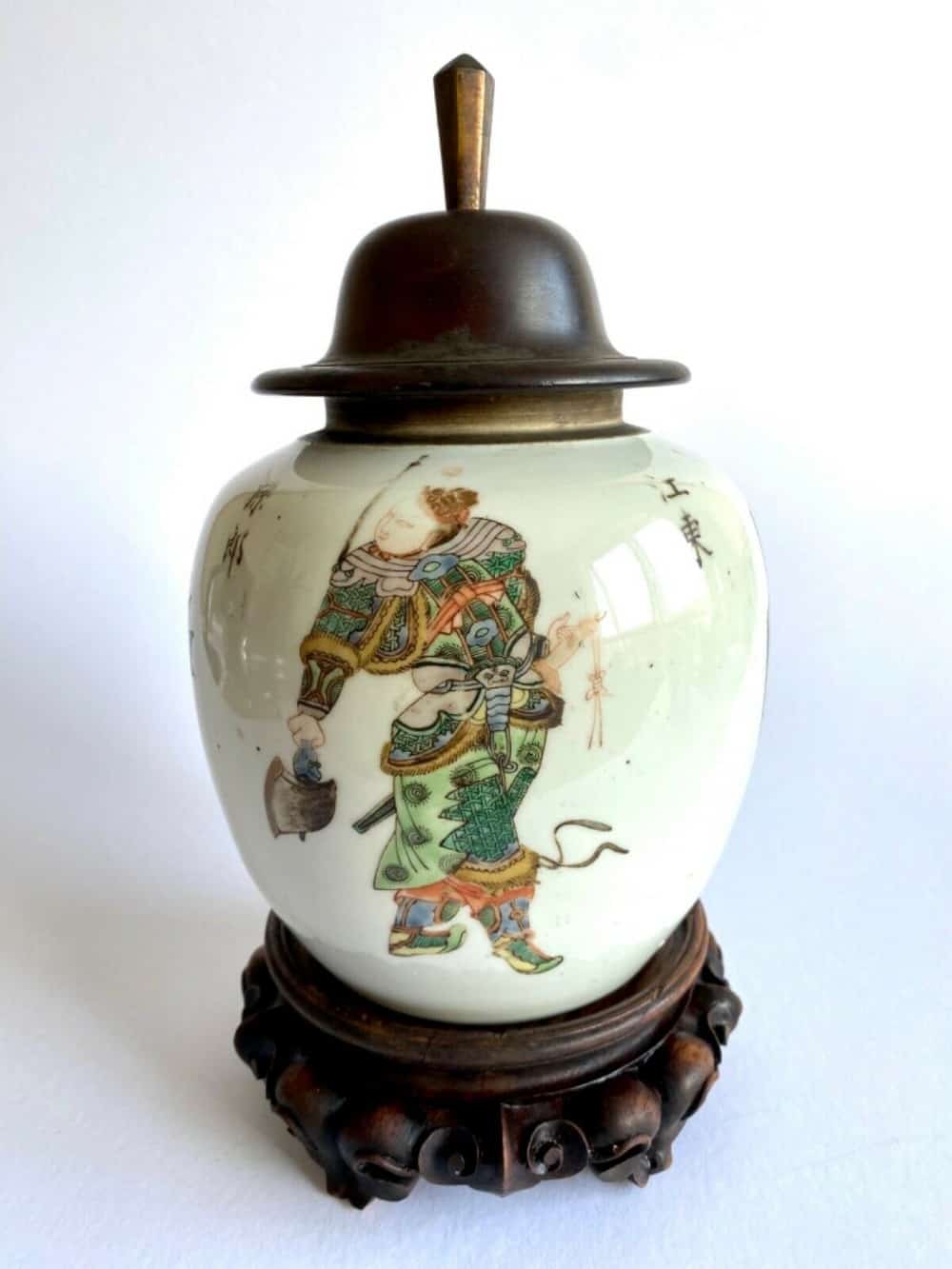 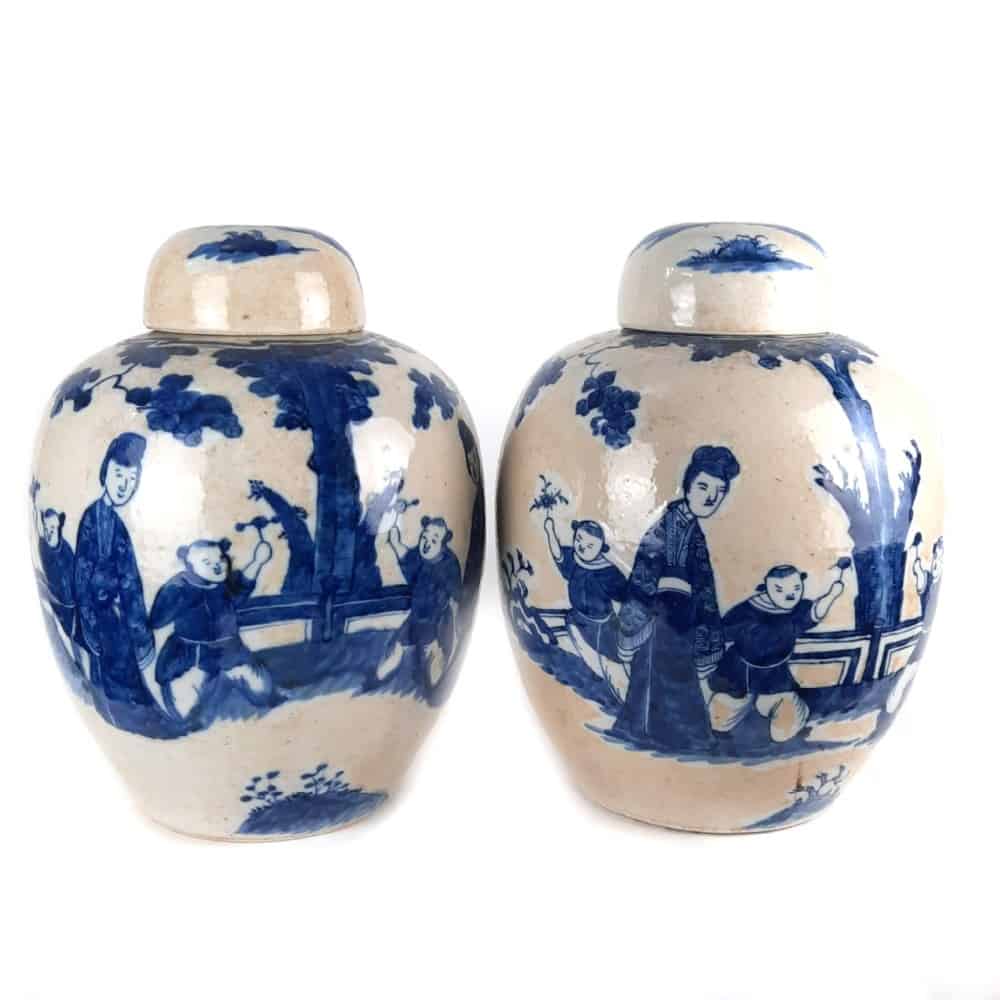 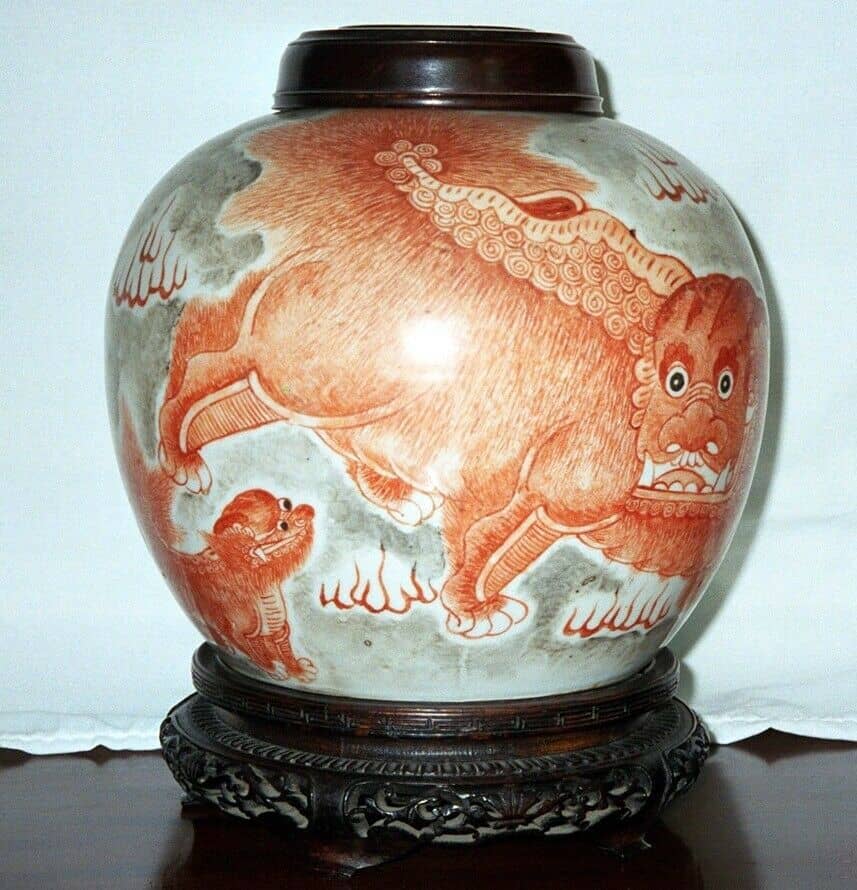 The most valuable ginger jars have one thing in common –they each have a reign mark. Examine the bottom of your jar and try to identify what dynasty it is from, or honors. with identifiable reign marks.

This Blue Ginger Jar has a verified Kangxi period mark which dates it before the 18th Century. It is worth up to $4,500.

Color patterns can play a huge part in value – the more attractive, intricate, and rare the color palette, the more money a jar is worth.

Some of the most popular colors include:

Because of their important function in carrying goods, ginger jars were made with a matching lid to secure their content. As with any antiques, these kinds of ‘accessories’ can dramatically increase their overall value.

If your ginger jar comes with its original lid, this can increase your asking price tenfold. On the other hand, if it’s lost or broken, it can reduce it.