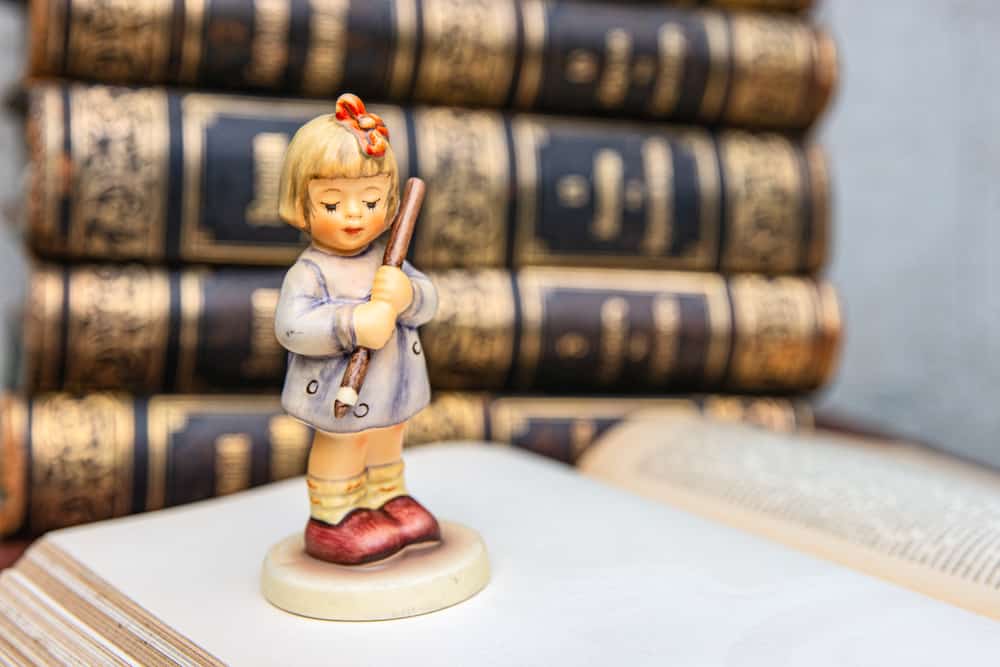 Many of us own porcelain figurines. They are popular decorative items. But did you know some figurines can also be worth quite a lot of money? For example, Goebel figurines, and especially the figurines in their Hummel line, can be worth thousands of dollars.

The Goebel Company is an old German company dating back to the 1800s. They are best known for the Hummel line figurines, but over the years, they have produced several lines of porcelain figurines, tableware, vases and even dolls.

So if you have a porcelain figurine on your shelves that is several years old, it is worth checking if it just might be a Goebel. But how do you identify Goebel figurines?

In this article, we will explain how to identify and date the figurines, but first a bit of background of the history of the company and the types of figurines they have produced since they branched into figurine production.

Franz Goebel and his son William Goebel founded the F & W Goebel porcelain company in January 1871 in Bavaria, Germany’s central porcelain producing region. By the turn of the century, it was one of the largest companies in the region employing about 400 people.

Initially, the company focused on producing porcelain dinnerware, but when the son William took over more of the artistic direction, the company, under the new name W. Goebel Porzellanfabrik, expanded to include their first figurines, dolls, vases and lamps.

When William died in 1911, his son Max took over the company. Max had spent time in the US studying the American market and using what he had learned, began to market their products abroad as well as Germany. He hired some of Europe’s finest sculptors to step up production without sacrificing any of the quality.

They also purchased a selection of artwork from contemporary artists to use as the basis of their decorative figurines. The most popular of these figurine collections are those based on the drawings of Maria Innocentia Hummel, a Franciscan nun.

After WWII, Goebel expanded further and got into the production of toys. In 1952, following a meeting with Walt Disney, the company produced a successful line of figurines based on Disney Characters.

The company is still functioning today and continues to produce high-quality porcelain items. You can read a more detailed history of the company on Goebel’s own website.

What are the different types of Goebel figurines?

There have been many different lines of Goebel figurines produced over the years, some of which are still in production. These are the most popular collections.

Hummel figurines are probably the best known and definitely the highest valued Goebel figurines. As mentioned above, they were based on the drawings of Sister Maria Innocentia Hummel (known as Berta Hummel before she became a nun). An art graduate, she began drawing rosy-cheeked children once she entered the nunnery. 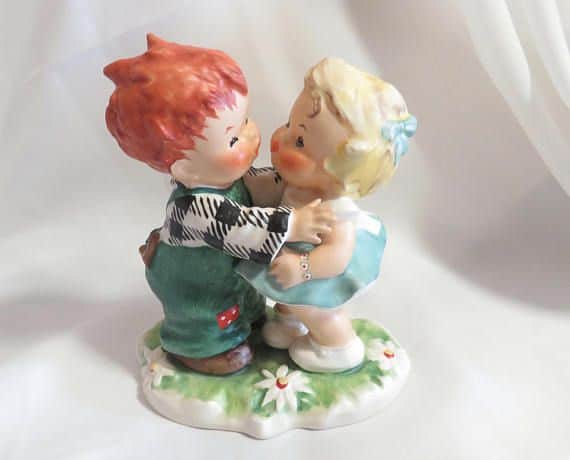 Red Heads and Blonde Series are both based on the work of artist Charlot Byj. The Red Heads collection has over 100 figurines and the blonde series has 16 figurines and they were produced between 1957 and 1988.

Blumenkinder or flower children in English have been delicately hand-made and painted by folk artists from the Erzgebirge region of Germany for over 100 years, with Wendt und Kuehn and Blank as two of the more well-known brands. These delightful miniature wood figures are typically girls holding Spring flowers but have expanded with other detailed designs.

The Co-Boy figurines feature elf- and gnome-like characters. The name for the collection comes from Coburg, the town they originate from. This line was in production between 1971 and 1987.

These are only some of the lines the Goebel company has created over the years. For more popular lines, take a look at Woolvey’s website.

How to identify and date Goebel figurines?

One question people often ask is how they can identify the figurine in order to work out its value. There are two ways you can identify Goebel figurines; by number or by name.

Your vintage figurine should have a number that is inscribed, stamped or hand-painted on to the base. The number will be 1-4 digits long and refer to a specific design that is listed in the company’s catalog.

There are also numbers that relate to the size and decorations of the figurine. For a very detailed guide on the numbers, in particular, the numbers used for Hummel figurines, we recommend the information on the Antique HQ website.

The other way of identification is using the figurine’s name. If you don’t have access to the list of numbers, you can find out the name of the figurine. However, it will not go far in helping you to work out the value of the figurine since the same figurines have been produced many times over the years.

The best way to identify and date the figurine is to use the trademark stamped on the base. It is important to know the date when your figurine was made. Because older versions of the same figurines are more valuable than the more recent ones.

The figurines made from 1935 to 1949 are Trademark 1 (TMK-1) and have crown marks. Figurines that were made for export after the Second World War bear stamps to show the figurines were made in the occupied zone of Germany. There are different variations of this stamp including “Made in US Zone – Germany” and “US Zone – Germany”.

Between 1950 and 1955, the marking changed and incorporated a bee. From 1956 until 1959, the design changed slightly every year. However, they still included the bumblebee. This period is TKM-2.

TMK-3 marking ran from 1960 for the next twelve years and had a stylized bee and often the inscription W. Germany to show they were not made on the Communist side.

When Germany was reunified in 1990, the mark was revised again and the new TMK-7 brought back the crown.

The final trademark, TMK-8, was used from 2000 until 2008 and replaced the grown with the bee again.

To see how the stamps look, check out the Love to Know page on Goebel figurines. This video from Dr. Lori is also a helpful tool if you are looking to identify and date your figurine.

Which figurines are worth money?

As we mentioned earlier, the older versions of the same figurine are worth a lot more than more recent versions. The Goebel company controls the production process carefully to ensure that a figure made in the 21st century looks exactly the same as those made in the early days of the 20th century.

But the date of the figurine is not the only factor that determines the value of the figurine. It also depends on how rare it is. Also, though Goebel has produced figurines based on the artwork of a range of artists, the figurines that command the highest prices on today’s market are authentic Hummel figurines.

Below, we have listed five examples of the most valuable figurines.

Now you have the knowledge to identify and date your Goebel figurine, you can work out its value. The website above gives some guidance on the most valuable figurines. EBay is also a good place to check.

There are plenty of Goebel figurines on eBay and studying the listings will help you determine the price for yours. Remember that the condition will also affect the sale price.

If you have any questions about Goebel figurines, write them in the comments section.