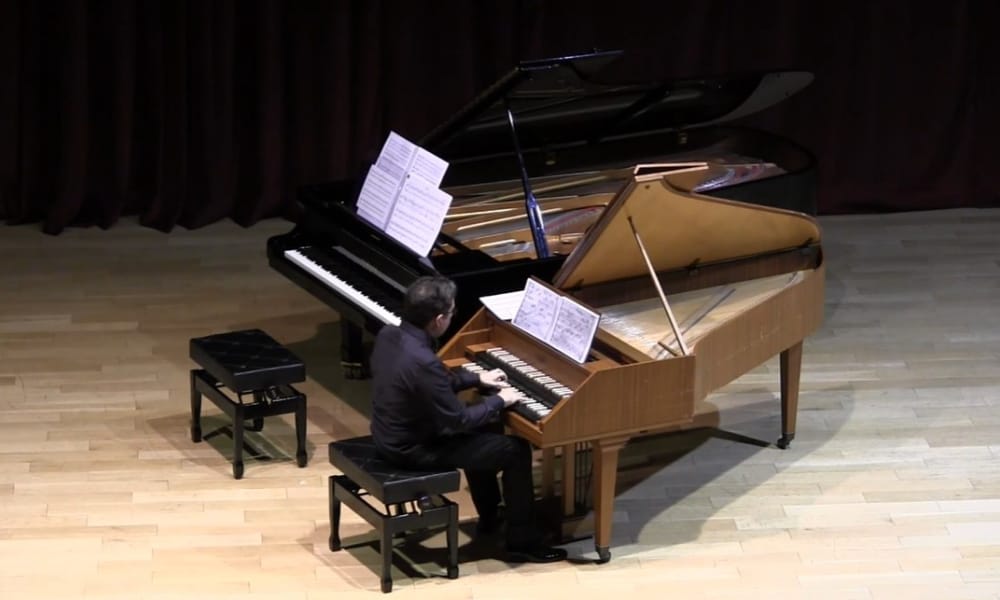 The moment you hear the word harpsichord, there is a vivid picture of Baroque times, when courts were full of aristocrats in lace, prestige people, kings and queens dancing and enjoying the melodies this instrument produces. The harpsichord played an essential role in court life, and musicians regarded it as the most crucial instrument of that time.

The first recordings of the harpsichord date back to the late 1300s, even though the exact time of its construction is hard to find. There are many different sources, but experts agree that the Middle Ages were the period when the first harpsichord instruments appeared in the music world.

There are several names for this instrument, depending on the country where musicians played it. Artists from Germany played cembalo, while members of Italian musical society played clavicembalo. Whatever the name, the period between the 15th and 18th centuries were colored with its tones and tunes.

The Baroque period between 1600 and 1750 was the golden age for the harpsichord. It was played on all the courts around Europe. The most prominent harpsichordists were:

The instrument started to lose its popularity at the end of the 18th century when the piano emerged. Even though the piano and harpsichord both have keys and similar physical looks, there are also many differences.

The piano is a more modern instrument compared to the harpsichord. Bartolomeo Cristofori, who worked for the prominent Italian Medici family, invented it somewhere around 1700.

He was an experienced maker of harpsichords who named his new instrument ‘Un cimbalo di cipresso di piano e forte.’ After transitional names fortepiano and pianoforte, the short version ‘piano’ has remained to this day.

As an expert in making harpsichords, Bartolomeo understood that instrument profoundly. However, he decided to make the piano by using a different mechanism. They maybe look alike, but in many ways, they are two different instruments in every sense.

While the piano is a struck, the harpsichord is a plucked string instrument. Both make the sounds when the strings vibrate, but the ways of activating the vibration are different.

After pressing the piano key, it activates a little hammer that hits the string. At that moment, the string starts to vibrate and makes a sound. The small hammer goes immediately back on its place, not to block the vibrating.

On the other hand, the harpsichord key plucks the string instead of striking it. The harpsichord mechanism is more guitar-like, and the principle of making the tone is similar.

When pressing the key, the piece of wood called jack goes up. There is a plastic part on it, plectrum, which plucks the string. The string vibrates and makes a sound. Once returning to the primary position, the plectrum passes next to the string, thanks to the tongue, a small jack’s mechanism.

A pianist uplifts the jack after pressing the key, but when the jack falls back to its place, there is a specific sound that is recognizable just for harpsichords. This so-called air-slashing sound sounds like something slashes the air.

Harpsichord vs. Piano – Differences in Sound

The dynamics of the played tones depend on the instrument. There is a considerable distinction between the piano and the harpsichord.

When a pianist presses the piano keys quickly and softly, he or she can hear the delicate and quieter tone. Vice versa, after pressing the key with more power, a more energetic and louder sound appears.

The reason for that is the force that applies to the key. It goes straight to the little hammer and hits the strings weaker or stronger. That means it is possible to create the desired dynamic and control the tones applying various forces while playing the piano.

While playing the harpsichord, the tone is the same. However, pressing the key doesn’t affect the sound, and it is possible to hear very little or no dynamic range compared to the piano.

When composers wanted to make the music dynamic, they needed to be inventive and apply various styles when playing. They used thrills and rolled chords and many other articulations to create diversity and variations.

Harpsichord vs. Piano – The Pedals and Emitting of the Sound

As you have already noticed, the piano has pedals at the bottom of it. The pianist presses them with feet when deciding to be creative with the sound.

For example, by pressing the damper pedal, you will get the ringing tone or a sound that seems to be echoing the room. It creates the feeling that the sound travels and lingers, which is an impossible option for the harpsichord. So, its tone can’t last long.

The harmonic sound is the typical characteristic of the harpsichord, and the piano doesn’t have such a melodic performance. Harmonious sounds are specific as you can hear the double frequency of the fundamental tone. That is the attribute that makes the harpsichord so beautiful and unique.

Harpsichord vs. Piano –  The Keys

These two instruments are also different when it comes to the number of keys. The piano has just one keyboard, while only the basic harpsichord model has only one. In most cases, double and even triple boards are standard for this instrument.

The classical piano has the 88 keys, but that number can vary from model to model. There are seven octaves in the piano’s range and maybe a bit more. That is precisely how many tones the human ears can recognize and hear. The range of sound is four to six octaves for the harpsichord.

We can hear the pitches from 20 Hz to 20,000 Hz. However, tones between 40 Hz to 4000 Hz are pleasant for our ears. All other sounds below and over that tone range, our ears will register as a noise. The lowest possible piano tone is 27 Hz, and the highest is 4200 Hz. As you can see, it is perfectly adjusted to human hearing.

Color of the keys

The piano is simple to recognize as it always has more white keys than black, and it looks like the black keys are resting on the white background. However, the earlier pianos had black keys for natural keys, and white keys were for sharp keys. The colors were reversed in the 18th century, and since then, they look like modern pianos.

The same thing was with the harpsichord. The natural keys were black while the sharp ones were white. There are several reasons for that, including expensive ivory, because there were no plastic keys like we have today. The ivory was luxury, and covering sharp keys on the harpsichord with this material cost less.

Some experts claim that the performers and aristocracy of that time used a lot of white powder for face and hands. Since they wanted to highlight the pale skin, the contrast with the black keys was better.

Another theory suggests that ivory keys were heavy, so the performer felt the difference in his hands and fingers when playing for a long time. As the sharp’s keys are less numerous than natural ones, it was logical that there is no need to be too light.

Harpsichord vs. Piano – Difference in Styles

The aristocracy and Baroque period were well-known for wealth, extravagance, and complexity. Therefore, the harpsichord’s appearance with a decorative and chic look followed the generally accepted taste. Usually, it would blend in with the furniture and household of the owner.

On the other hand, the piano became popular in different circumstances, so the middle class of the 18th and 19th centuries created its look. Therefore, it was meant to be practical, straightforward, stripped of all decorations, including additional details and ornaments.

These instruments perhaps look similar in the structure at first sight. However, once you look at them more carefully, you will see the difference in their appearances.

Harpsichord vs. Piano – Maintaining and Tuning

When it comes to tuning and maintaining the instrument, every musician will tell you it is of high importance for their career. The pianos have stronger strings, and there is no need for tuning them so often.

On the contrary, the harpsichord had weaker and thinner strings, and it was necessary to tune them before every performance. It was tiring and tedious, but not too complicated.

Both instruments have beautiful sounds, and they have inspired many composers. The differences in pitches and dynamics are what make the music so colorful and imaginative. Bach is one of the most famous composers ever, and the harpsichord inspired him. Imagine how wonderful it would be if he had the piano all his life.