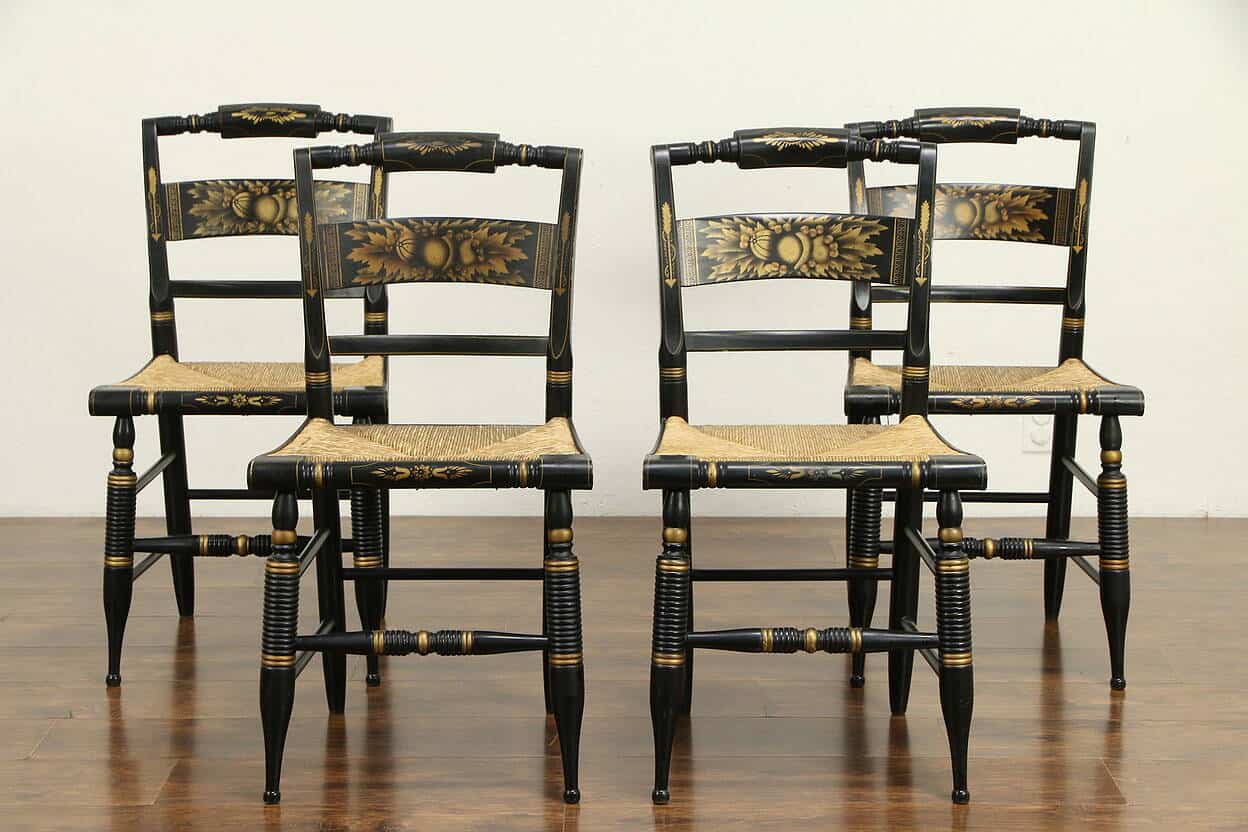 Throughout the 19th century, Hitchcock chairs were massively popular amongst American families due to the chairs’ exquisite design and affordability.

Often referred to as ‘fancy chairs,’ Hitchcock chairs embodied the New England style of American furniture manufacturing, which later came to represent the style of the New Republic.

Today, vintage Hitchcock chairs can be valuable, with collectors and furniture enthusiasts paying top dollar for ones restored to their original condition.

In this guide, we’ll cover everything you need to know about the company’s history, how to identify vintage Hitchcock chairs, and what to expect in terms of prices and value.

In the early 1800s, Lambert Hitchcock had apprenticed under cabinetmaker Silas Cheney from whom he’d learned the traditional methods of making and painting chairs.

While working alongside Cheney, Hitchcock also met Eli Terry, a clockmaker and inventor at the time. They fascinated Hitchcock by showing him how he used tiny and intricate metal pieces to make watches.

Historians believe it may have been this encounter with Terry that sparked the idea which would define Hitchcock’s legacy as a furniture maker.

The idea was simple: instead of making each chair individually by hand—which was laborious and slow—you could quickly make various interchangeable parts (like a watch) and assemble the chair afterward.

Hardwood was plentiful in the area around his mill, so he made the chairs components from birch, oak, and maple.

Hitchcock also diverted from tradition by abandoning the practice of hand-carvings and paintings in favor of the British stencilling method, which further cut costs and sped up the manufacturing process.

The result: an easily-made, affordable chair that still had the look of elegance and fanciness.

Hitchcock opened his first sawmill in Barkhamsted, Connecticut, in 1819.

Before long, the assembly-line speed of mass production, new stencil design, and low prices had earned the Hitchcock Chair Company a lot of notoriety, especially among middle and class and ordinary people.

In fact, the surrounding village around his sawmill was called Hitchcocksville for more than a decade after his death before the town changed its name to Riverton.

According to the New England Historical Society, Hitchcock’s factory was producing 300 chairs per week by the late 1820s—and by the 1840s—Lambert Hitchcock had manufactured and sold more than 200,000 chairs.

Interestingly, Hitchcock was never a rich man as his imagination and artistry did not extend to his business practices. The company declared bankruptcy in 1829.

He partnered with Alfred and Co. to revive the brand five years later but cut ties with them soon after to run a small cabinet store until he died in 1852.

Almost a century later, John Kenney revived the Hitchcock name in 1946, briefly returning the iconic brand to its formal glory. However, by the 1970s, the company’s struggles had come back, and it shut its doors again in 2006.

Do they still make Hitchcock chairs?

Rick Swenson and Gary Hath bought the rights, plans, stencils, and artwork to once again revive the iconic brand in 2010, and they still make vibrant, contemporary furniture today.

Still River Antiques also continues to restore Hitchcock chairs and is the only authorized restorer of Hitchcock furniture.

How do you identify a Hitchcock chair?

Many Hitchcock replicas and imitations have been made over the years.

These aren’t necessarily made to pass off as originals but are simply a testament to the enduring quality and style of the classical design.

Therefore, it’s essential to practice prudence when examining a Hitchcock chair to identify if it’s an authentic vintage or antique.

There are two main things to look for:

Although some Hitchcock designs would reverse this to have a light-color chair against dark stencilling, the most iconic and recognizable pattern was typically the darker tone contrasted against light metallic stencils.

The stencil designs could vary between leaves, flowers, eagles, baskets of fruit, country life, and cornucopias, and the seats were usually made from cane, wood, or rush.

The backs of many vintage Hitchcock chairs had rails (either vertical or horizontal), and some had balls on the end of the chair legs.

You can check out this video to better see what a vintage Hitchcock looks like up close.

While chair design will be your first clue, the fastest and easiest way to identify Hitchcock chairs as authentic is through the identifying stencil.

Due to the company changing hands several times, three different identifying stencils can be found on Hitchcock chairs, depending on when they were produced:

The letter’s “N” should be spelt forward. Chairs from this period would not have an “R” for registered trademarks.

The letter “N” on these chairs was often spelt backwards due to certain factory workers who couldn’t read or write having to cut the stencil signature themselves.

Hitchcock chairs made beyond 1948 will also have the “HCCo” stamp on the bottom, indicating that the chairs were not original antiques.

Are all Hitchcock chairs marked?

After 1843, Hitchcock had little to do with the company as he’d opened a small cabinet shop elsewhere.

Some unsigned chairs may have been produced during this time, though they’re more difficult to authenticate without the signature since the chairs were mass-produced and thus easy to replicate.

Even after Kenney revived the name and began production again in 1948, he didn’t acquire the rights to the Hitchcock brand until 1952, meaning that a number of reproduction Hitchcocks were made without any markings.

Not having been a wealthy man, Lambert Hitch would marvel at the value his iconic furniture went on to have.

Some Hitchcock chairs are precious today, especially when properly restored and kept in good condition. Naturally, earlier chairs and special editions will command higher prices, but even 20th-century iterations can still bring in hundreds of dollars.

A Hitchcock chair cost between $0.50 and $1.50 when first manufactured and sold.

Today, a vintage Hitchcock chair in good condition would easily be worth two to three hundred, while rarer antiques like this will go for over $1000.

Even rarer collections that you can find on 1stdibs can even break the $10,000 mark.

Though mainly known for his chairs, Hitchcock also made other types of furniture—including mirrors, desks, tables, cabinets, and buffets—many of which value over a thousand if restored to good condition.

Go Antiques and Antique Arts are two of the biggest professional online retailers if you want to stay away from the more commercial sites.

It may be true that the modern catchline of ‘some assembly required’ was the brainchild of Lambert Hitchcock, a man whose ideas about making furniture with interchangeable parts were a hundred years ahead of his time.

His chairs brought elegance and style to hundreds of thousands of middle-class American homes, allowing even the most average family to experience a measure of class and fanciness.

They also paved the way for the modern, self-assembled furniture-model whose products are found in millions of homes worldwide.

Whether a single Hitchcock armchair adorns a room, or an entire dining set commands it, Hitchcock chairs will always strike the balance between humble and exquisite.