Skip to content
Noname Antiques » How to Clean Rust off Antique Cast Iron? 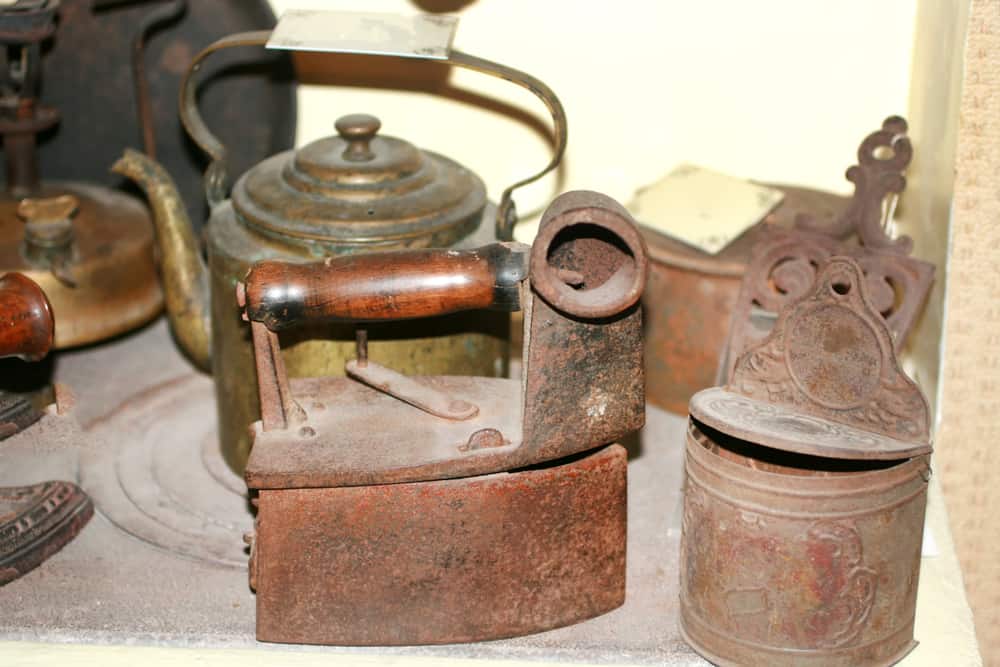 Cast iron is a type of metal that’s very tough and durable. Back in the day, it was utilized for almost all metal constructions because it was easy and cheap to produce, and its strength made cast iron items last for decades.

However, despite cast iron’s sturdiness, its big enemy is rust. Cast iron items will rust easily if you don’t show them proper care, and they will become useless. Nonetheless, cleaning rust off an old cast iron item is an easy and relatively quick process you can do yourself.

Do you have a rusty cast iron pan that needs cleaning? Perhaps you found some rusty old cast iron furniture and want to restore it to its original condition? In any case, you’re in luck!

In this article, we’ll thoroughly explain cast iron and why it tends to rust. We’ll also provide a step-by-step guide on cleaning rust off antique cast iron items, as well as a few tips to help prevent your antiques from rusting.

Cast iron belongs to the family of iron-carbon alloys and contains between 2 to 4% of carbon, along with traces of other elements and impurities. It’s crafted from iron ore that melts into pig iron. Pig iron is then remelted with other alloy metals and cast into molds.

Cast iron origins can be traced back to ancient China, during the 5th century BC. During the 15th century, cast iron saw extensive use in France to construct cannons. Eventually, cast iron became prevalent in England and later on in America.

Manufacturers at the time would utilize cast iron for numerous different metal constructions ranging from the first skyscrapers to cast iron skillets and pots for cooking. During the late 18th century, cast iron was also used in bridges, with the first cast iron bridge being The Iron Bridge in Shropshire, England.

Nowadays, other metals such as aluminum or stainless steel have completely replaced cast iron in metal constructions, thanks to their rust resistance. However, cast iron is still prevalent in uses that take advantage of its high heat retention, such as grill racks, ovens, and cast iron cookware.

Why Does Cast Iron Rust?

The scientific term for rust is iron oxide, and it’s formed when iron reacts with water and oxygen. When untreated cast iron is left in an environment with air and moisture, rust will eventually start to form on its surface.

However, this doesn’t mean that your cast iron antiques will be destroyed if some rain falls on them or if you clean them. Just ensure to dry cast iron items properly, as prolonged exposure to moisture and air will start to form rust on them.

You should make sure that any antique cast iron items are properly stored away from oxygen and moisture. Also, you should check up on them from time to time, as even the smallest amount of wetness in the atmosphere can start to form rust throughout the years.

Nevertheless, just as rust is the biggest enemy of cast iron, so are acids for rust. All you need to clean rust off a cast iron surface is a strong acid, a few tools, and a bit of time.

How Do You Remove Rust From Antique Cast Iron?

If you want to clean rust off antique furniture such as an antique cast iron bed frame, you’ll need a few things first:

After you’ve gathered the materials and tools, follow these simple steps to clean your cast iron:

How to Clean or Restore Antique Cast Iron Cookware?

If you want to clean and restore antique cast iron cookware, like a rusty cast iron skillet, here are the materials you’ll need and the steps you should follow:

Tips on Caring for Your Cast Iron

As we mentioned before, cast iron is an excellent metal, thanks to its durability. However, the number one issue with cast iron, which has prevented its use, is rust. Still, if you wish to own and use cast iron items such as furniture, hardware, or cookware, you should make sure to care for them properly.

When it comes to items such as pieces of furniture, make sure to properly clean off any rust on them as soon as you spot them. You can also repaint old furniture with rust-proof metal paint or spray them with a rust-resistant coating.

On the other hand, outdoor furniture is much more challenging to maintain because of its constant exposure to weather effects. When you’re not using these items, make sure you cover them as much as you can to avoid contact with air and moisture. Ideally, you also want to store them somewhere where they won’t be affected by rain or snow.

If you’re using cast iron cookware and you see rust begin to form, stop using them immediately and clean them thoroughly. Also, remember that a well-seasoned cast iron pan will not rust, so make sure yours is properly seasoned. Here’s what you need to do to season a cast iron pan:

You can also repeat this process frequently, depending on your use. You can wash the pan normally with mild dish soap without destroying the coating. However, you should never put it in the dishwasher.

Also, you should avoid cooking acidic foods like tomato sauces in cast iron as they can destroy the seasoning and start corroding the metal. According to testing done by America’s Test Kitchen, cooking tomatoes in cast iron for up to 30 minutes is acceptable. But, don’t overdo it, or you’ll destroy your pan and end up with a metallic taste in your food.

You should always ensure that your cast iron items are clean and rust-free before using them. If you find some rust on them, follow this guide, and your cast iron will be clean in no time. Also, if you want to buy or sell some antique cast iron items, remember that rust can significantly depreciate the value of an object.

In any case, go out there and look for some new cast iron antiques to add to your collection. You never know what hidden treasures you might find!