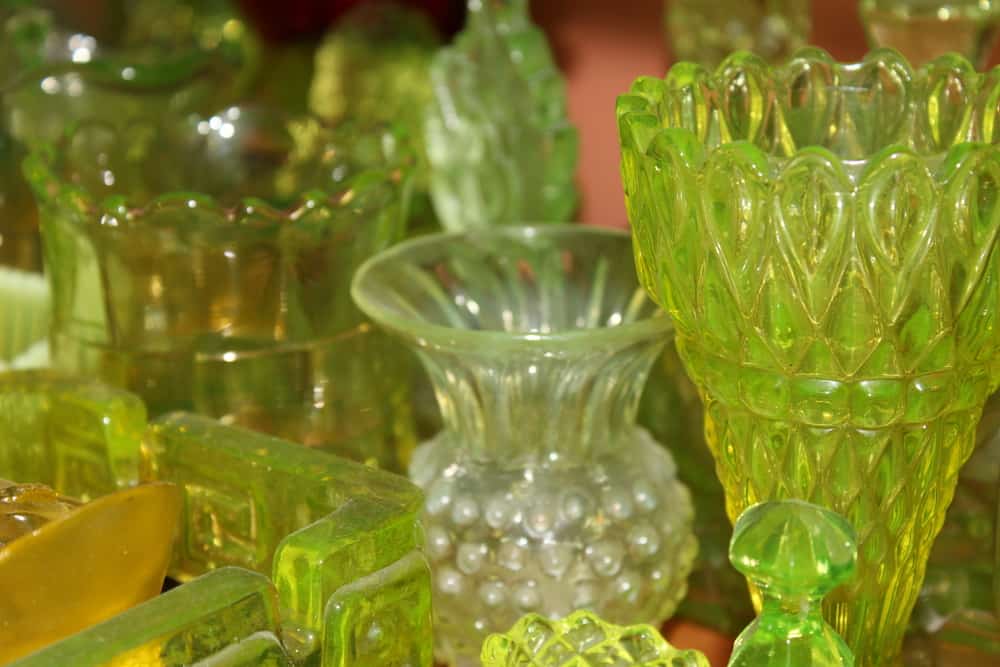 Uranium glass, also known as vaseline glass, is a rare type of glass that’s popular among glass collectors. Its uniqueness is due to its yellow-green color and its ability to glow under ultraviolet light or black light.

In this article, you’ll find information about the history and different types of uranium glass, as well as how to identify it and its value.

If you want to learn more about how to identify uranium glass, keep on reading!

Uranium has been used as a coloring agent since at least 79 A.D. Yellow glassware from this period was found in a villa near Naples, Italy, containing 1% uranium oxide. However, some glassware from the early 20th century could reach an amount of uranium up to 25%.

Production of glass objects that contained a small amount of uranium became popular during the 1830s. However, from the beginning of World War II, until the end of the Cold War, the availability of uranium was very scarce. This led to a halt in the production of uranium glass, which was later resumed once using depleted uranium.

Today, uranium glass is still used for small objects with decorative purposes. Many famous glassware brands, such as Fenton, produce a limited supply of uranium glassware to appeal to collectors.

There are several different types of uranium glass, each with its own distinct characteristics. Some of the most popular ones are:

The name “vaseline glass” has its origins in the 1950s and was previously called canary glass. It refers to glass with a specific yellow-green color similar to Vaseline or petroleum jelly. Another factor that distinguishes vaseline glass from other types of uranium glass is that it’s transparent.

Depression glass was a type of glass that saw a heavy usage during the Great Depression era, hence its name. This type of glass can be transparent or semitransparent and comes in several colors, including pale green, yellow, blue, pink, red, black, and white.

Custard glass is another type of glass that resembles vaseline glass and was popular around the same era. Its resemblance to vaseline glass comes down to both glasses sharing a similar yellow color.

Burmese glass is a type of art glass that is mainly used for small ornamental vases. Burmese glass is opaque and comes in a standard satin finish or a rare shiny finish. It was one of Queen Victoria’s favorites and was in production since 1886 by the Thomas Webb & Sons company in England.

Burmese glass contains uranium oxide and a small amount of gold, giving it its characteristic yellow color. Burmese glassware also comes in a pink color that results from reheating the glassware in a furnace.

There are also numerous other types of glass that contain uranium and come in different colors and finishes. You can find some of them here.

Uranium is a radioactive material, and so it can be alarming to hear that there is uranium in your glassware, even in small amounts. However, you don’t really have to worry about it.

Even though uranium glass does contain a level of radioactivity that is measurable with a Geiger counter, it’s generally considered safe. Nevertheless, the Environmental Protection Agency (EPA) has a few tips about what you can do to avoid radiation from uranium glass.

These tips include not using uranium glass to store or consume any food, as you run the risk of ingesting uranium particles with your food. Also, if you see that your uranium glass container has any chips or cracks, you should properly dispose of it.

How to Identify Uranium Glass?

The most important characteristic is that uranium glass glows bright green if exposed to a UV light or blacklight. This is due to the presence of uranium in it. So, most objects made from uranium glass will show some fluorescence when exposed to UV light.

But, if you don’t have access to a black light, there are some other factors to consider in order to determine if your glassware is made from uranium glass. These include:

In general, uranium glass objects are not that valuable, with most of them fetching a price up to $50. However, just like other antiques or collectibles, several additional factors might increase or depress the value of uranium glass.

Age and rarity are crucial factors when it comes to assessing uranium glass. If the object is a very old antique, is particularly rare, or has some historical significance, it may fetch a larger amount of money.

Another essential factor to consider is the condition of the item. Since most of these objects are used for decorative purposes, a pristine condition is very important and will increase the object’s value. On the contrary, one with apparent scratches or chips may be undesirable and not sell for much.

Where to Buy and Sell Uranium Glass?

If you’ve decided to build a collection of uranium glass objects or you want to sell your old uranium glassware, there are several options for you.

If you want to buy and sell uranium glass online, you can use websites like eBay or Craigslist. There you can post the items you have for sale or search for any particular uranium glass object you might want. Don’t forget to do your research on the value of these items, so you don’t get scammed.

Another thing to consider in online sales is shipping. Since these objects can be very fragile, you might want to insist on local pickup. This way, you can check the item’s condition and verify that it is indeed uranium glass.

If you prefer in-person sales, your local antique store or thrift store is your best option. If you see any glassware that looks neon green or is made by brands like Mosser or Fenton, it might be vaseline glass.

While you may be taken aback by uranium glass at first, if you look further into it, you might come to appreciate it. Understandably, it is alarming to know that household items can contain such notorious ingredients. Nevertheless, you don’t really run any risk of exposure to radiation if you’re careful.

Not to mention that uranium gives these glass objects a unique beauty that makes them ideal for ornamental purposes. If you want to get your hands on one or a few pieces of uranium glass, look around your local stores and you might find some hidden gems. And don’t forget to bring a UV light flashlight to verify its authenticity!