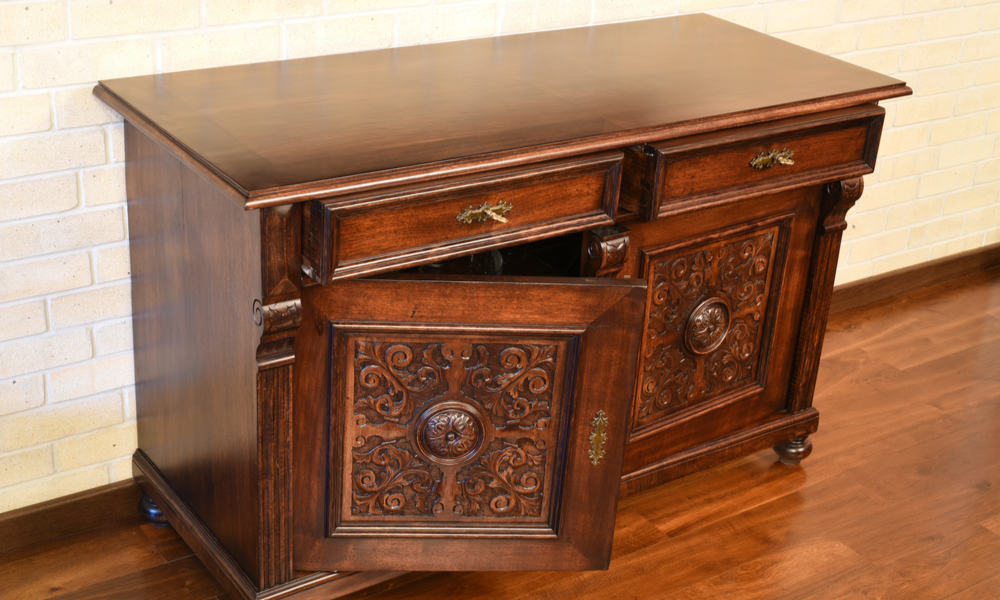 Many collectors appreciate antique furniture, particularly valuable pieces produced centuries ago. They recognize a few typical dresser styles from different historical periods and buy them as an investment or beautiful addition to their homes.

One of the most crucial things is learning about identifying antique dressers. The first step is recognizing their style, used materials, and overall shape. Only that way, you can determine these pieces of furniture’s age and the era they originated from.

Before buying an antique dresser, you should know how to identify the era it was created and its style.

Most experts agree about thirteen primary eras crucial for furniture production, and numerous styles appeared from the 1300s to the 20th century.

You should pay particular attention to the most sought-after English and American furniture styles typical for the period from the 17th to the 19th centuries. Let’s take a look. 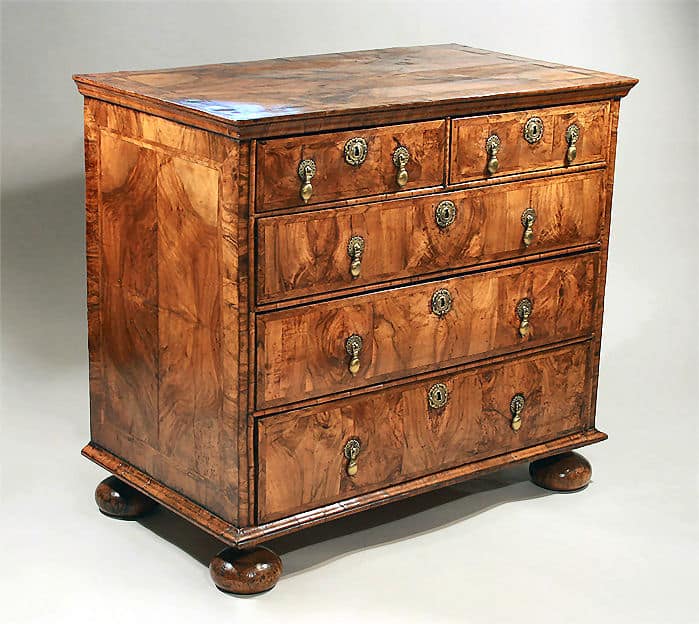 The style named after the English King William and Mary, his consort, was actual from 1685 to 1720. Many American colonists brought these pieces of furniture to the new world and then tried to use native wood for making dressers in the same style. They are rare nowadays, and their price can go up to $60,000. 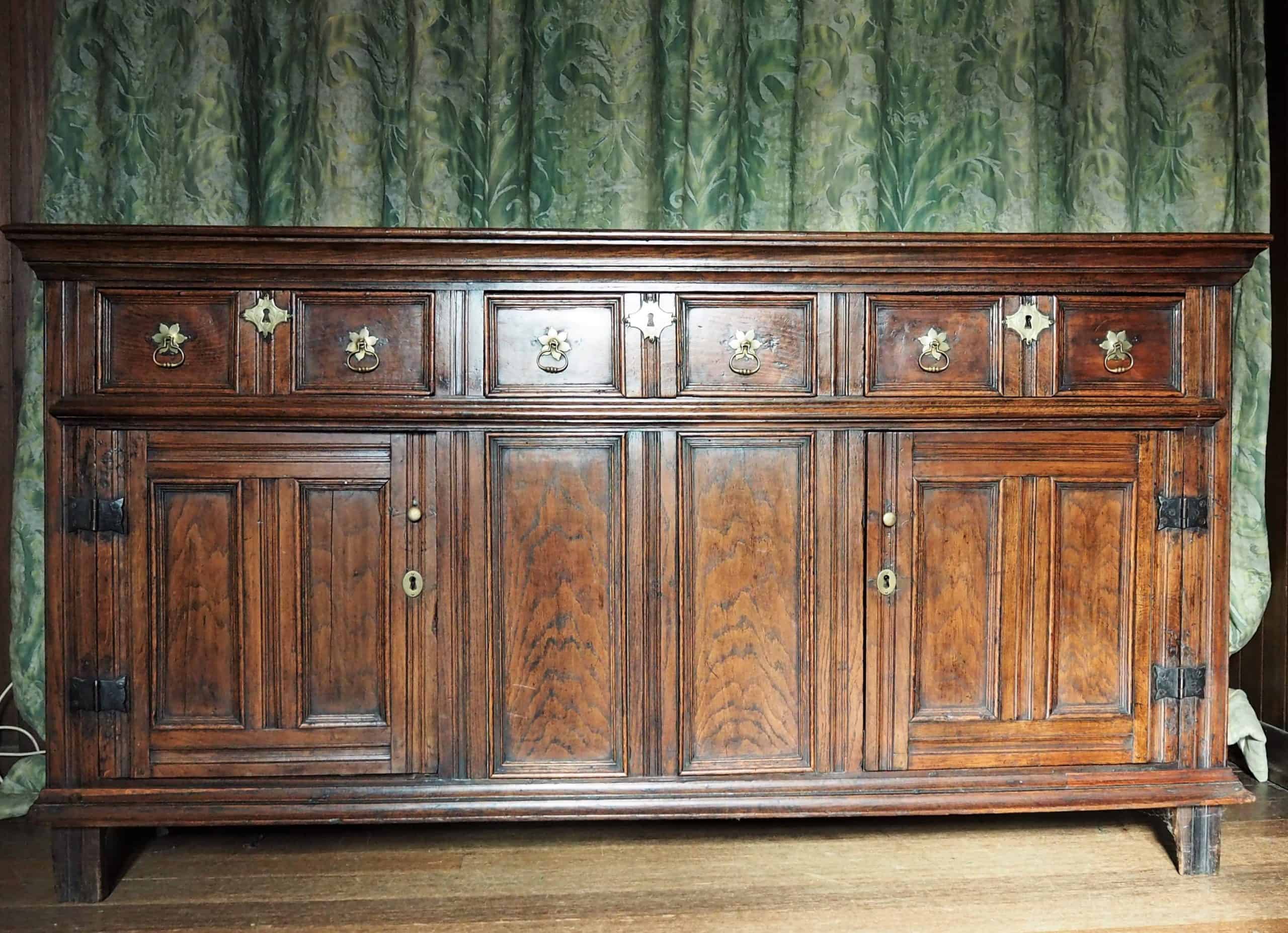 This delicate style was typical for Queen Anne’s court and was actual from 1720 to 1760. Interestingly, each region in North America developed a unique design and created furniture of walnut, maple, cherry, and poplar. Their price on the current market is about $2,000 to $10,000. 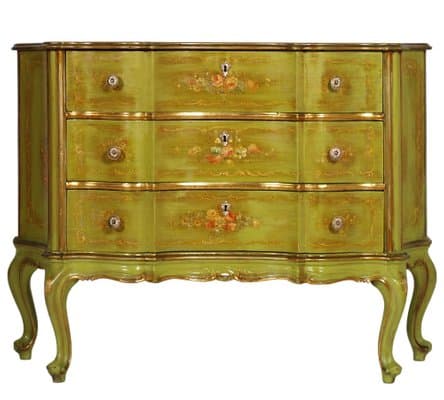 Thomas Chippendale was a famous English cabinetmaker who presented the new style from 1755 to 1790, and many artisans copied his design. You can buy such an antique piece for about $2,000. 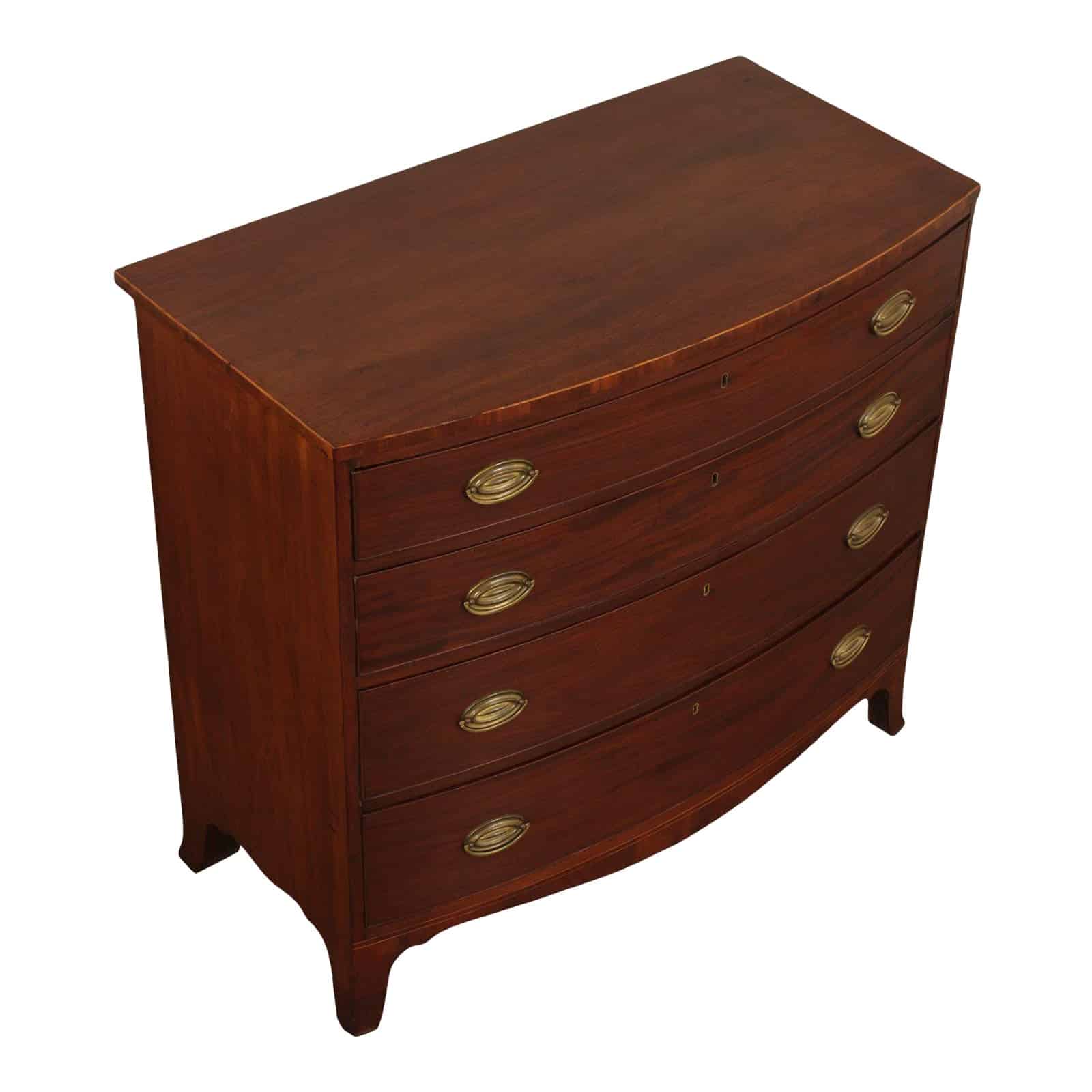 The period from 1790 to 1815 reflected the growing patriotism in new American states, so their cabinetmakers used mahogany, maple, satinwood, or birch to develop unique and distinctive furniture styles. 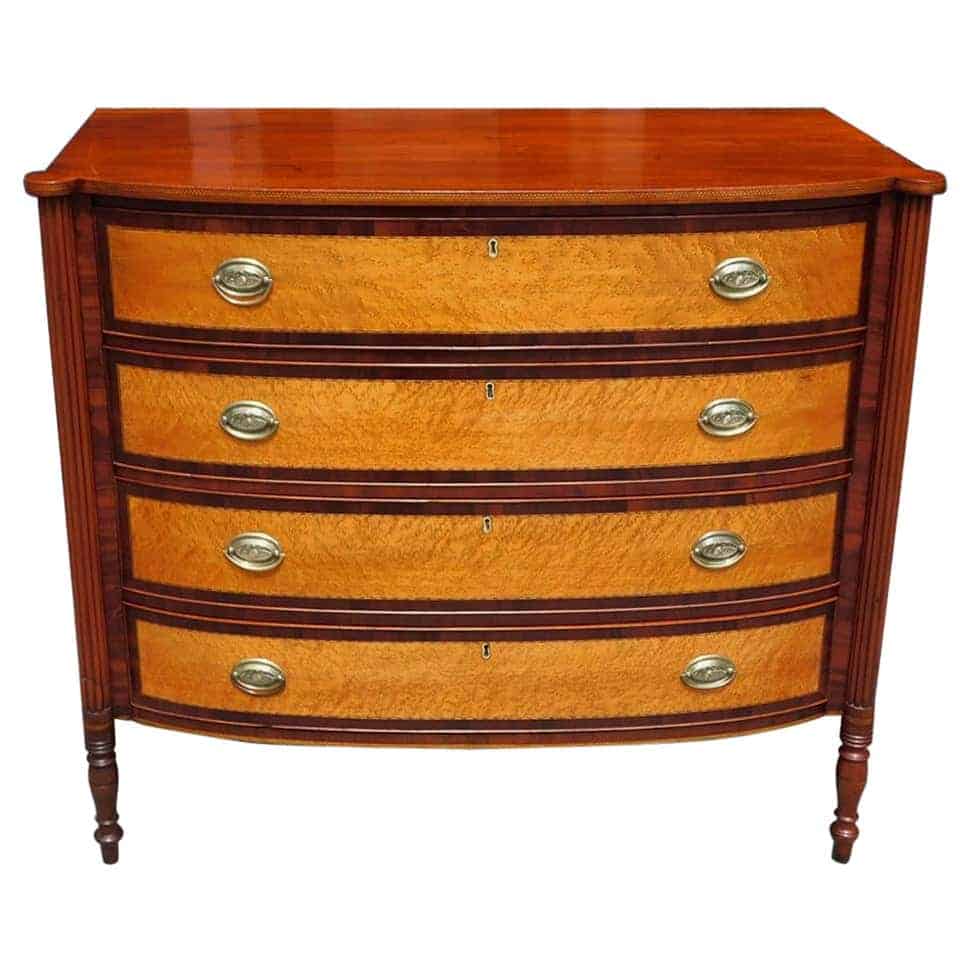 Thomas Sheraton created dressers of the same name, and many craftsmen made them of mahogany, pine, and maple from 1790 to 1810. Unlike the Hepplewhite style, it typically favored fluted legs. Nowadays, most pieces come at a price of $2,000 to $12,000. 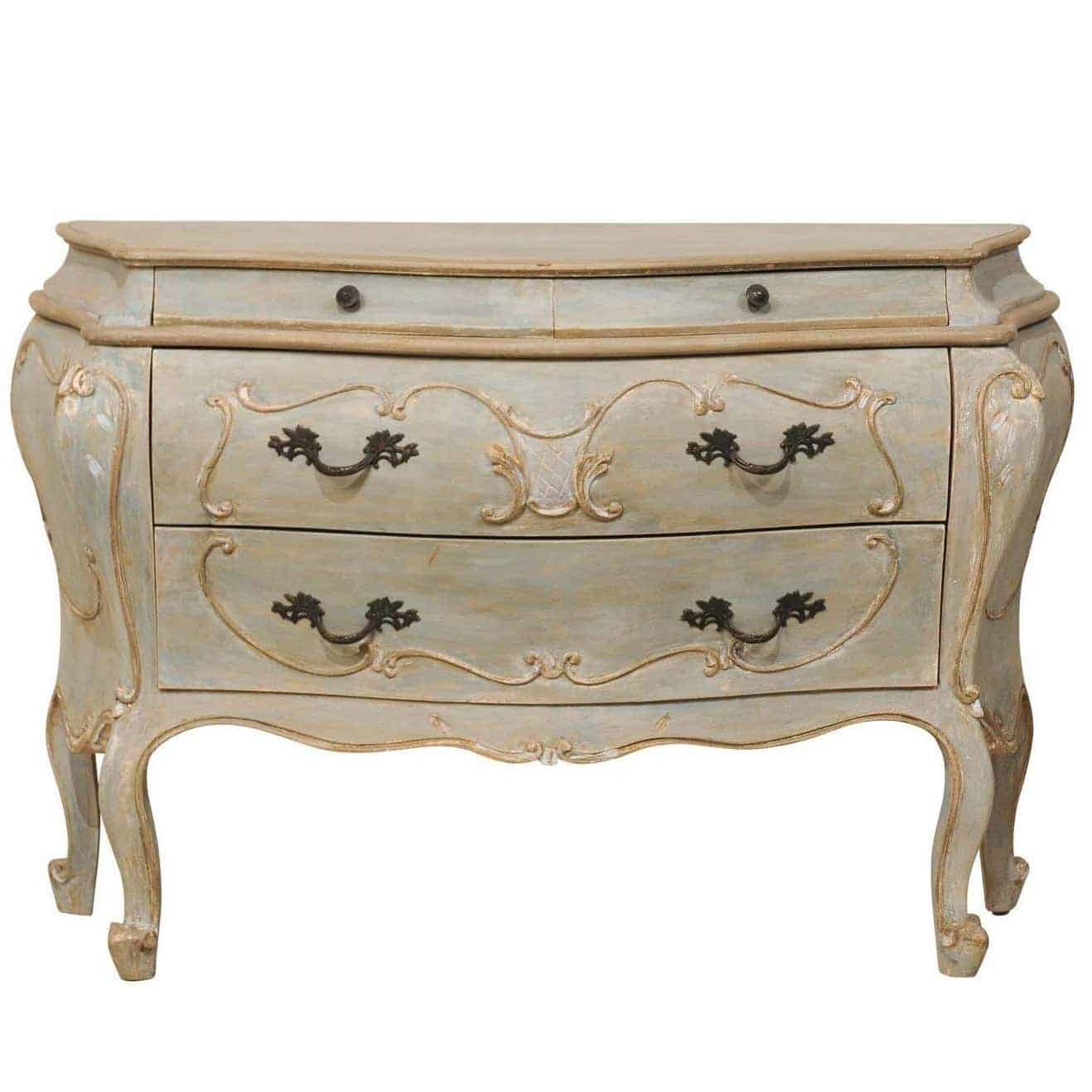 This extravagant French dresser style was trendy in the 18th century. Most pieces were made of mahogany wood and came in various finishes, including painted, gold, or silver. They are typically worth about $1,000 to $5,000 on the current market. 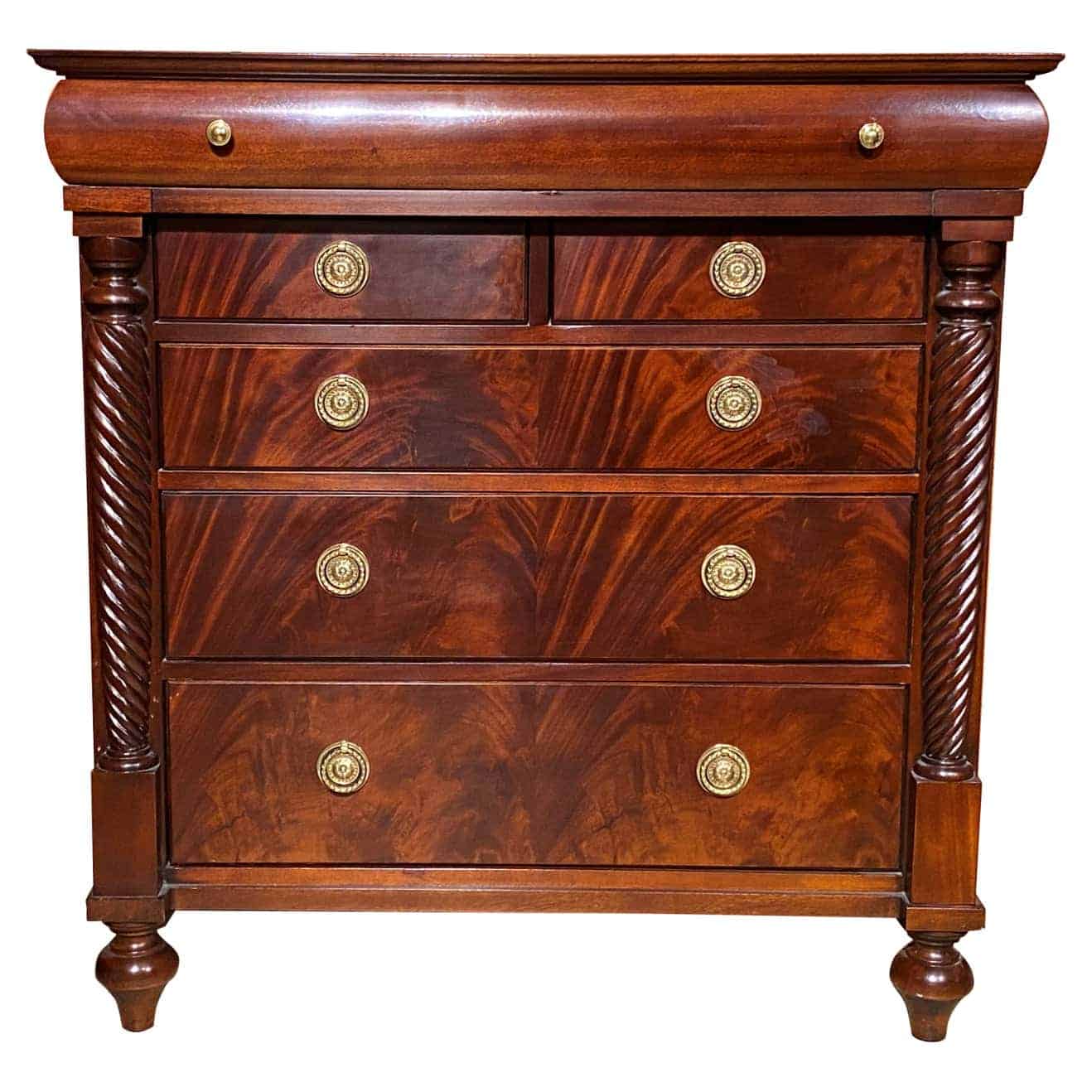 A new dresser design emulating the classical Egypt and Greece styles emerged in the early 19th century. Most pieces were made from 1805 to 1830, when American cabinetmakers enjoyed incorporating patriotic motifs, mostly eagles.

It is possible to find such a dresser for an average of $100 to 2,500, depending on its quality and ornateness. 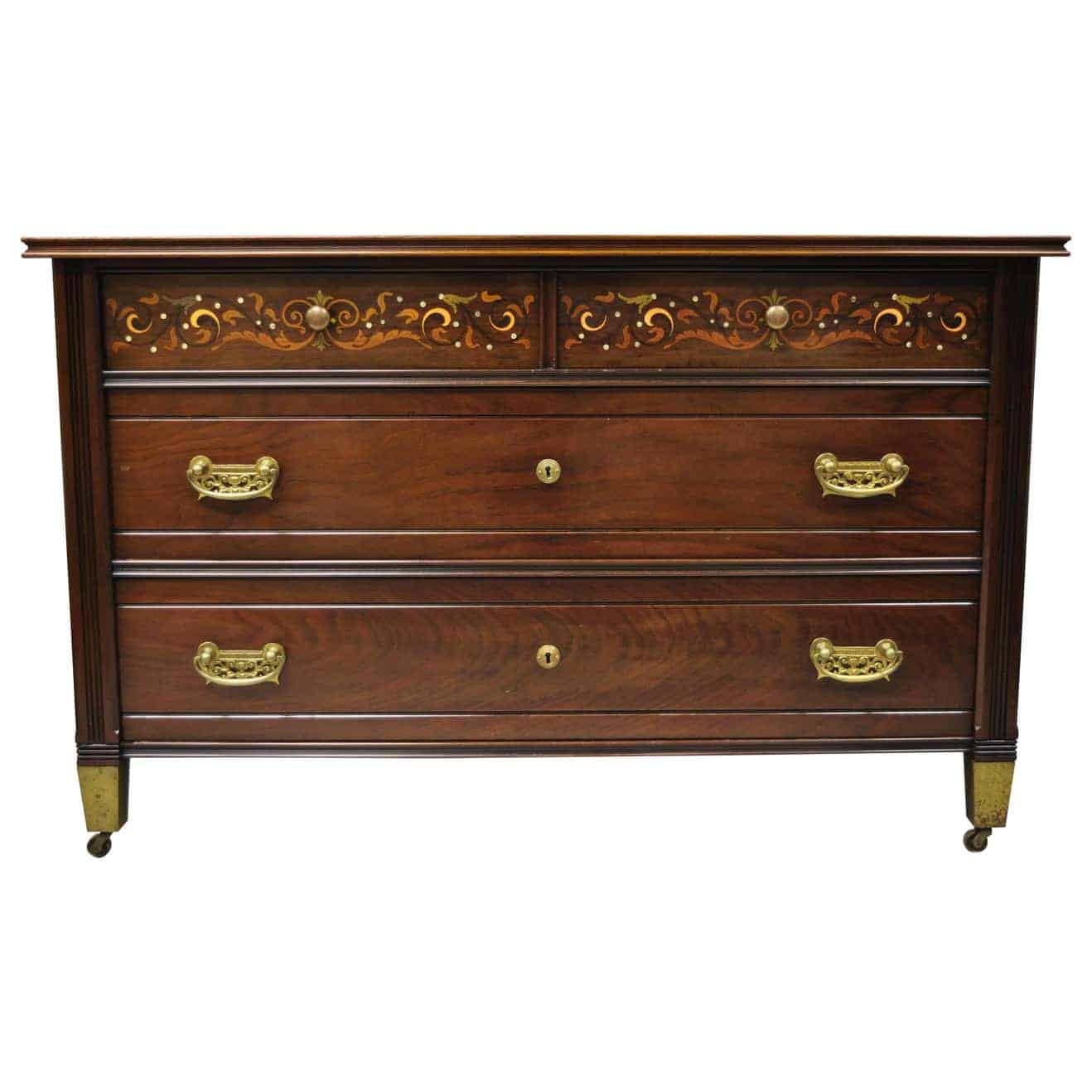 Cabinetmakers made numerous lovely light-colored dressers during a short Edwardian era lasting from 1901 and 1910.

The new style was entirely different and less ornamented than furniture typical for the Victorian period. Finding one of these pieces can be challenging, and their average price is $1,000 to $3,000. 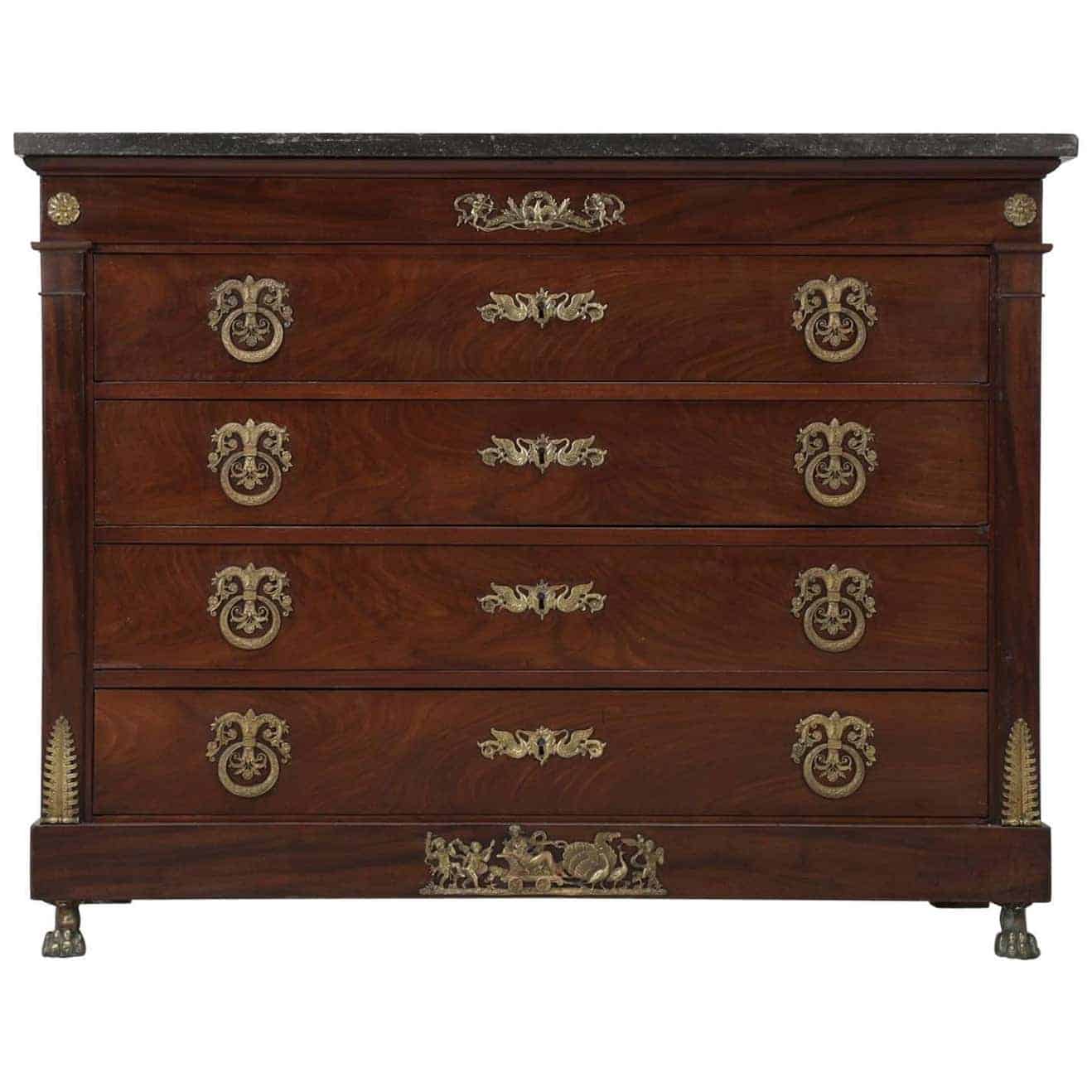 This furniture produced from 1830 to 1850 is considered the first and the plainest Victorian era sub-category without excessive ornamentation.

Some New Orleans and Boston families accepted dressers made in this style, but they were primarily popular in the province. These pieces are expensive nowadays and cost at least $9,000. 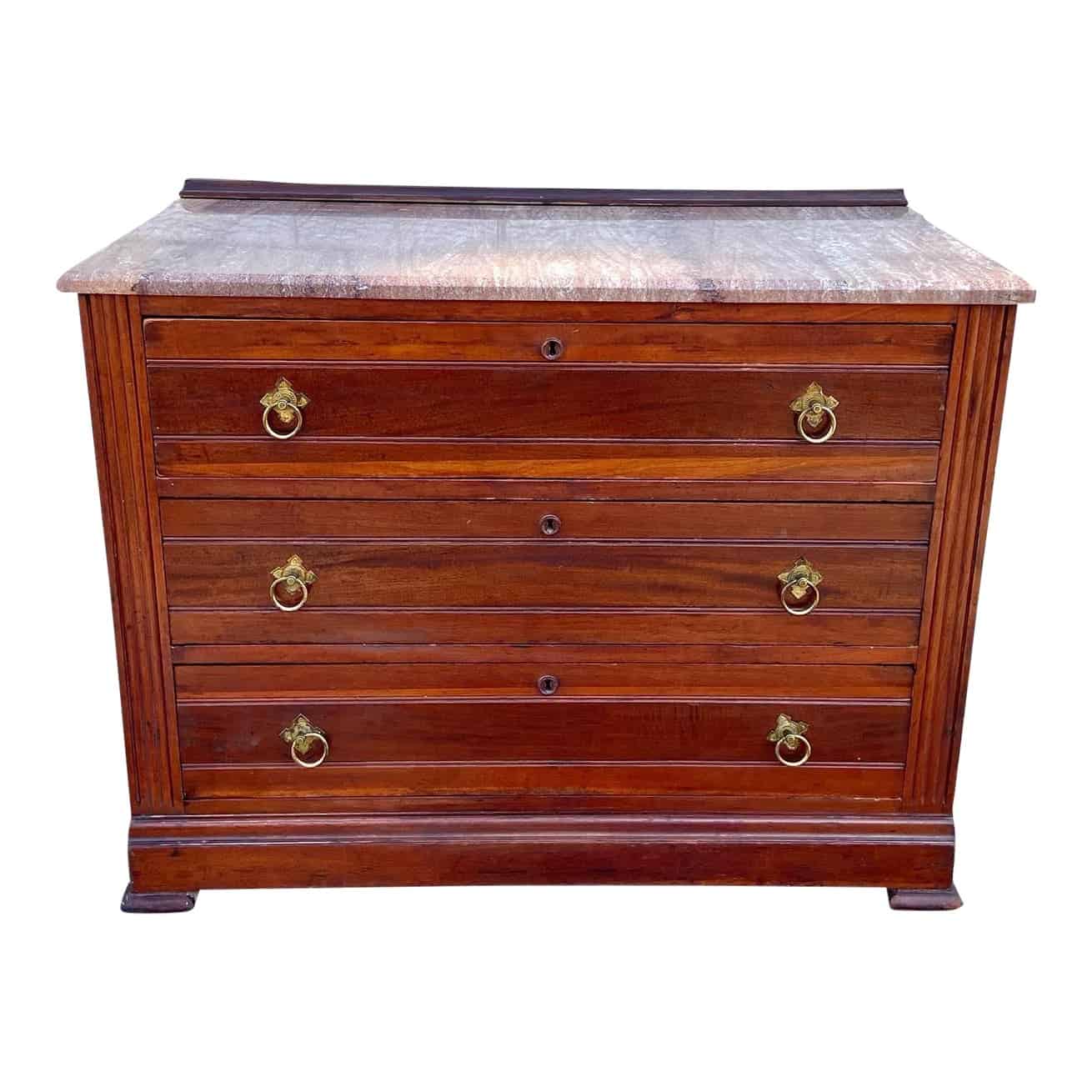 The Victorian era lasted from 1837 to 1901, and you can quickly recognize dressers made in this style inspired by gothic. They come in numerous sizes and shapes and can cost you $800 to $4,000 on average. 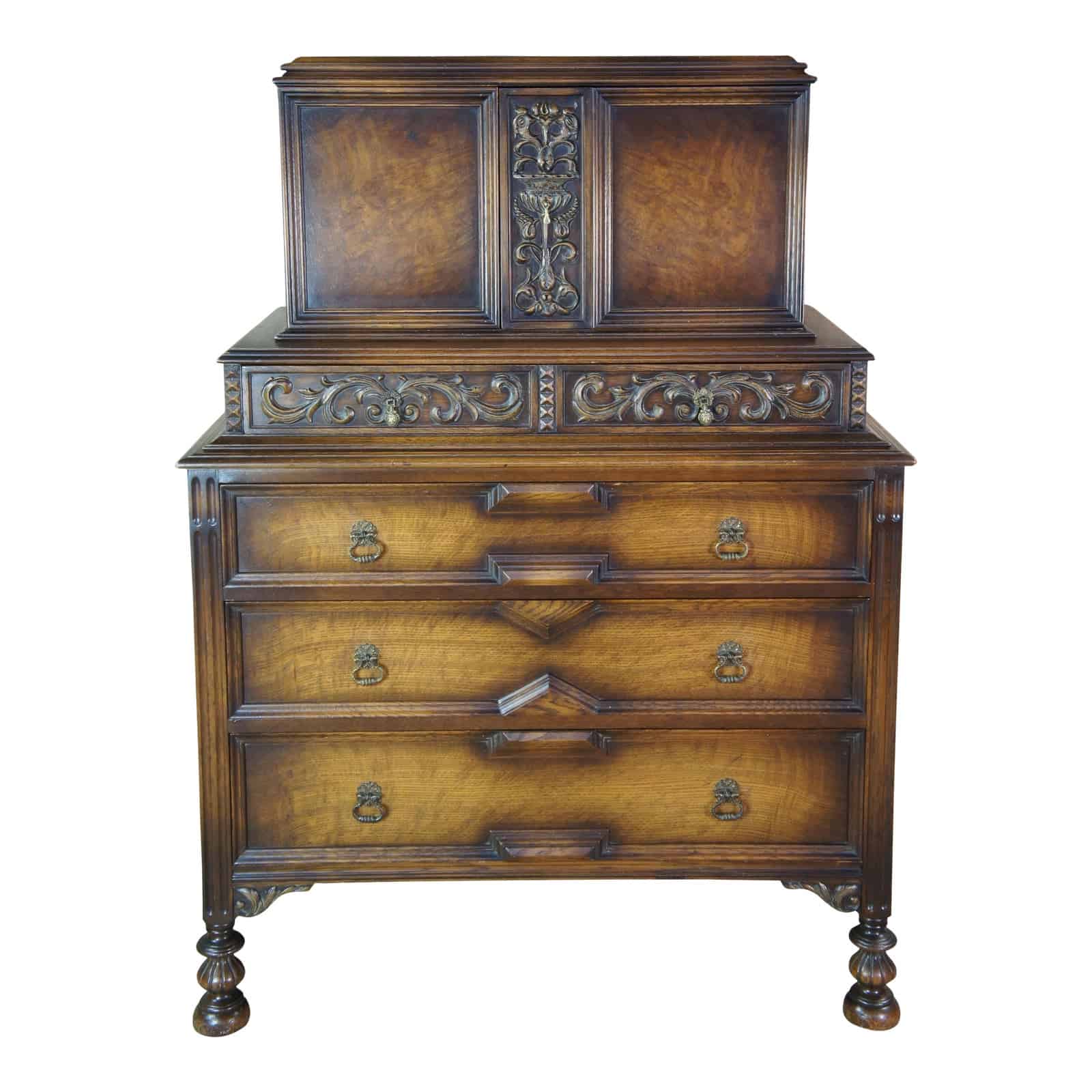 You can quickly recognize dressers designed in this style popular from 1840 to 1860. These unique pieces created of oak and walnut featured elements like turrets, quatrefoils, and pointed arches.

They are not abundant in the current market, and you should set aside approximately $2,500 if you prefer this style. 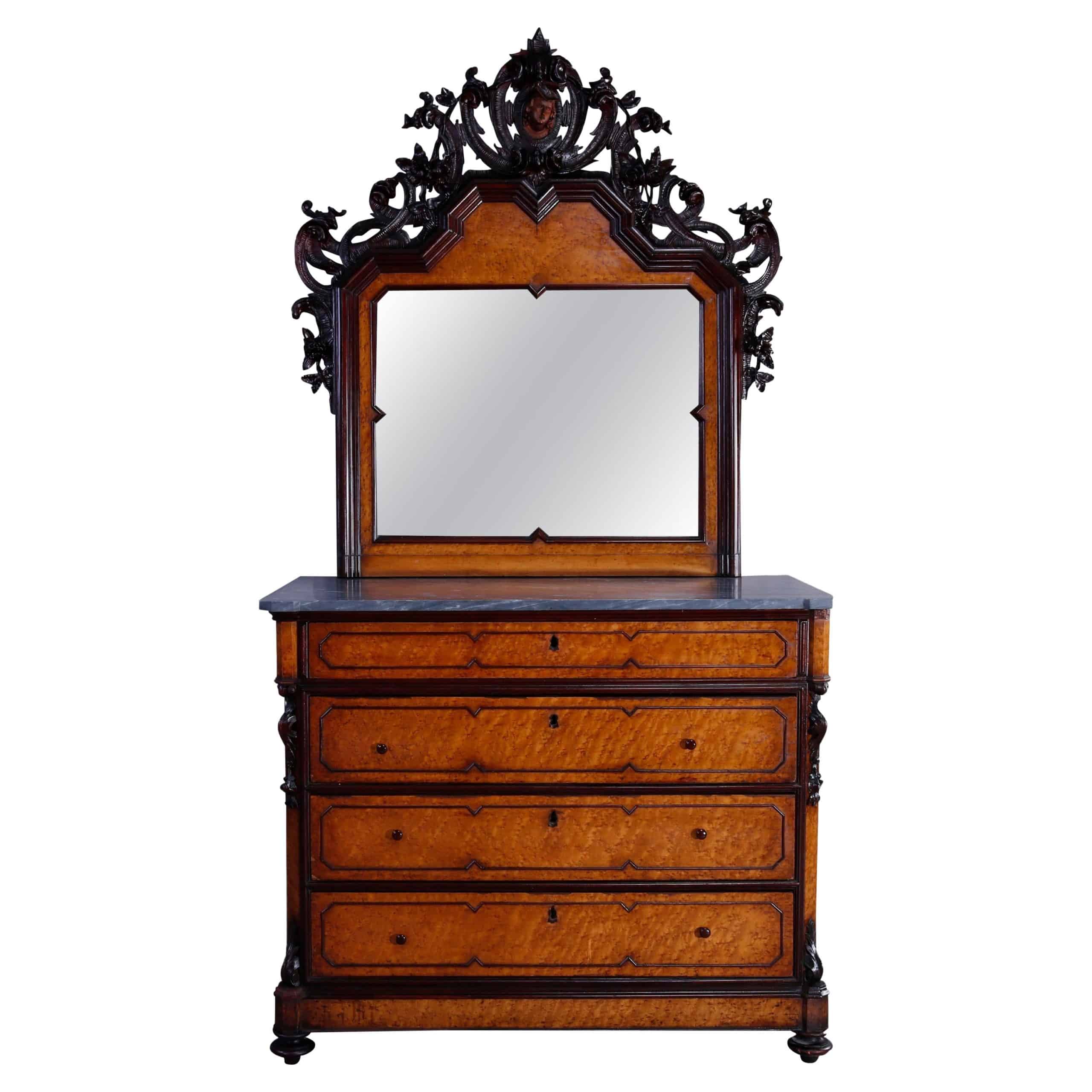 This dresser design was recognizable for C- or S-shaped scrolls and carved decorations, including flowers (roses), leaves, and scallop shells. It appeared in England and France from 1845 to 1870 but quickly came to America. Such pieces cost $2,000 to $3,000. 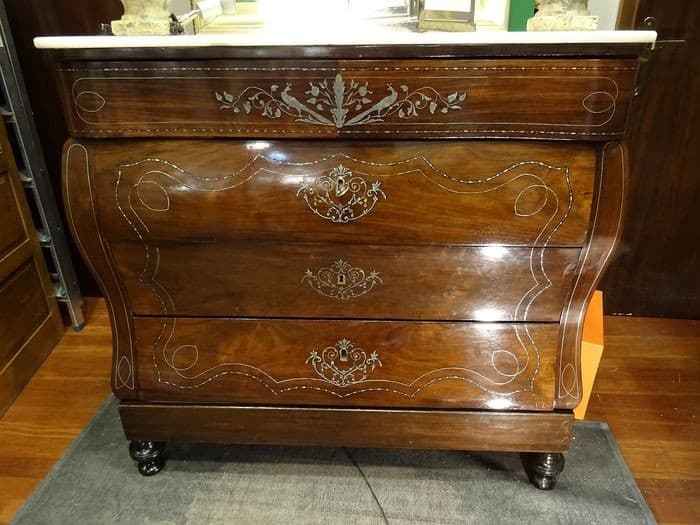 This feminine-style Victorian sub-category featuring spiral profiles and added carved or painted flowers lasted from 1850 to 1915. It is pretty hard to find one of these dressers, and you should prepare a few hundred or even thousands of dollars once one appears at auction. 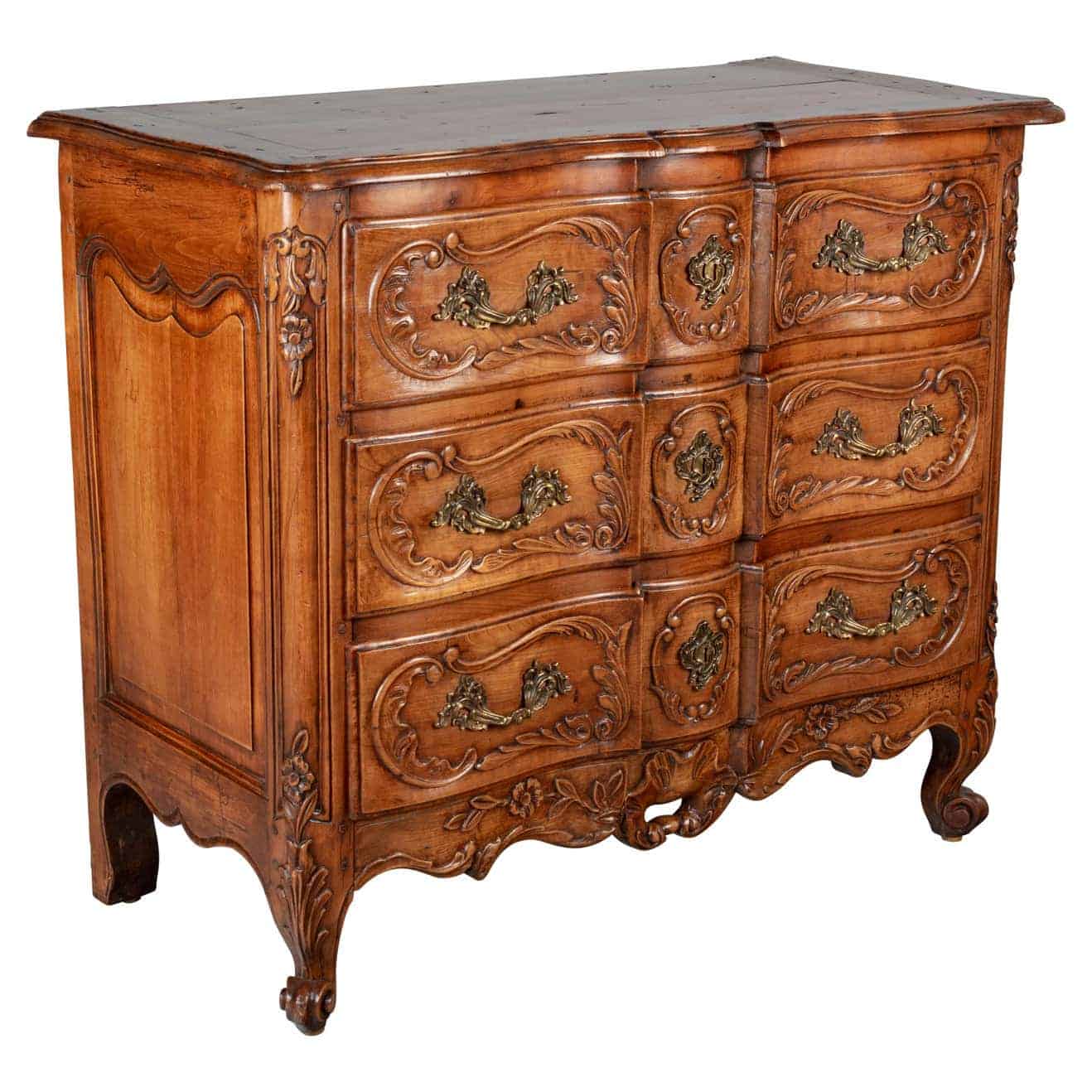 This style appeared during the Victorian era, from 1850 to 1914. It delighted people with a combination of straight lines, arches,  garlands, and applied medallions. Cabinetmakers used expensive woods for their creations, like rosewood and ebony. In most cases, a dresser in this style will cost you $2,500 to $8,500. 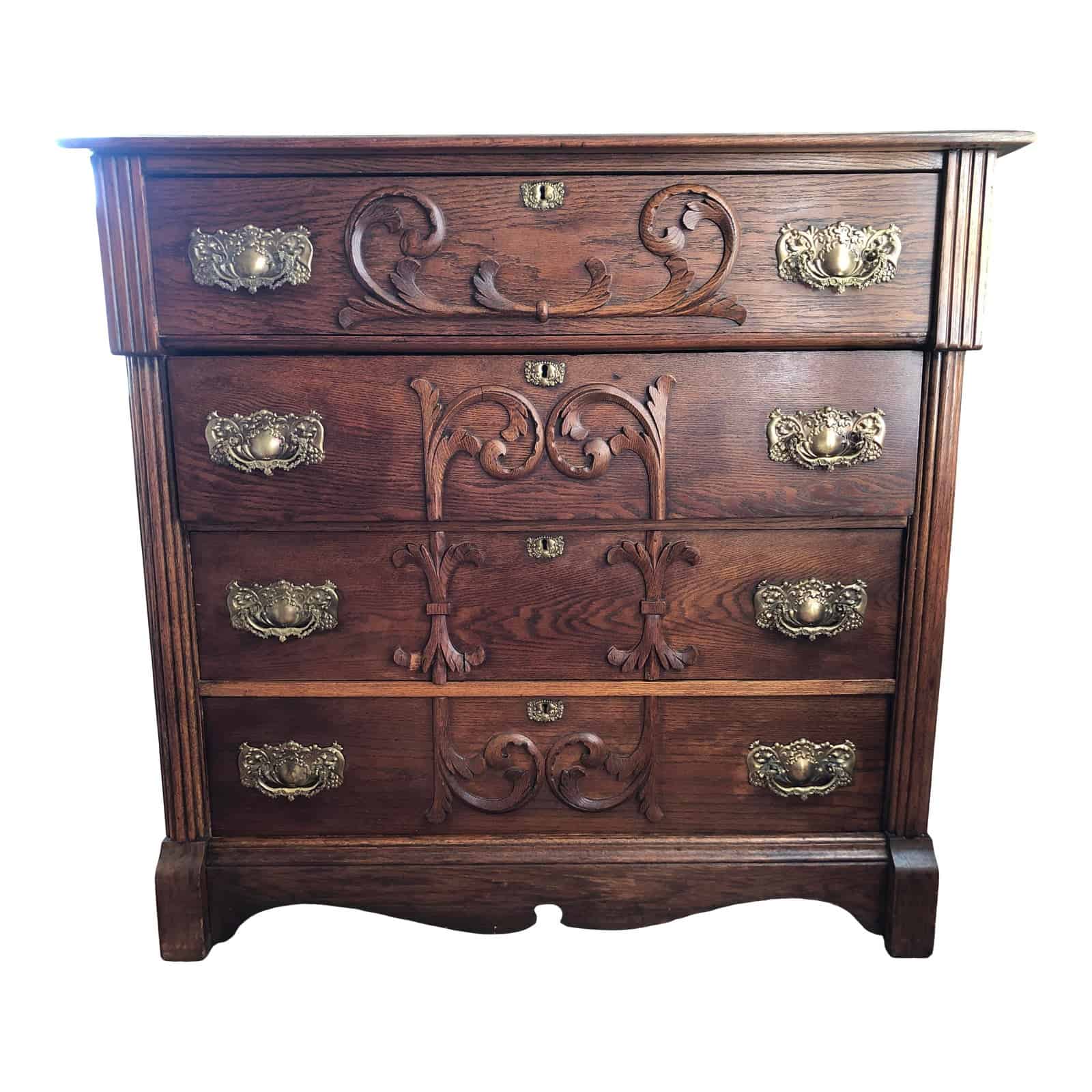 This furniture style was named after Charles Locke Eastlake, who studied the relationship between craftsmanship and each piece’s form and function.

American furniture manufacturers produced these typically rectangular dressers decorated with grooves, chamfers, and brackets from 1870 to 1890. Their current price is $600 to $2,000. 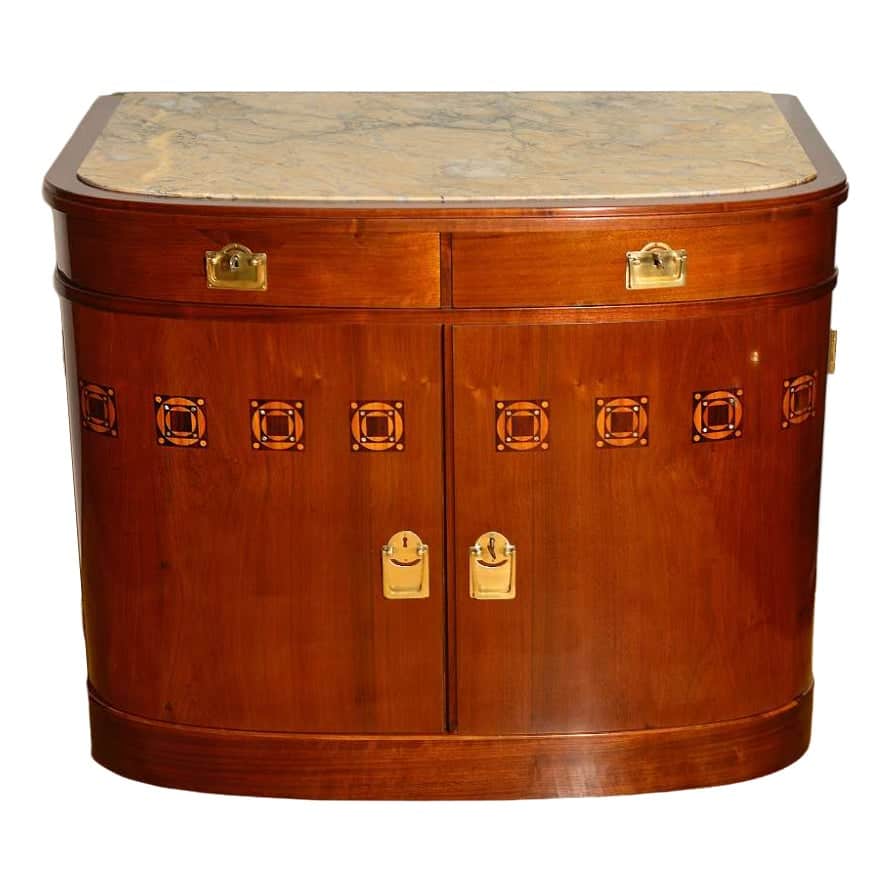 Art Nouveau dressers crafted from 1896 to 1914 were appreciated in France, but Americans weren’t warmly embraced this style. Therefore, these pieces are relatively inexpensive, and you can find a beautiful dresser for a modest $650 to $3,300. 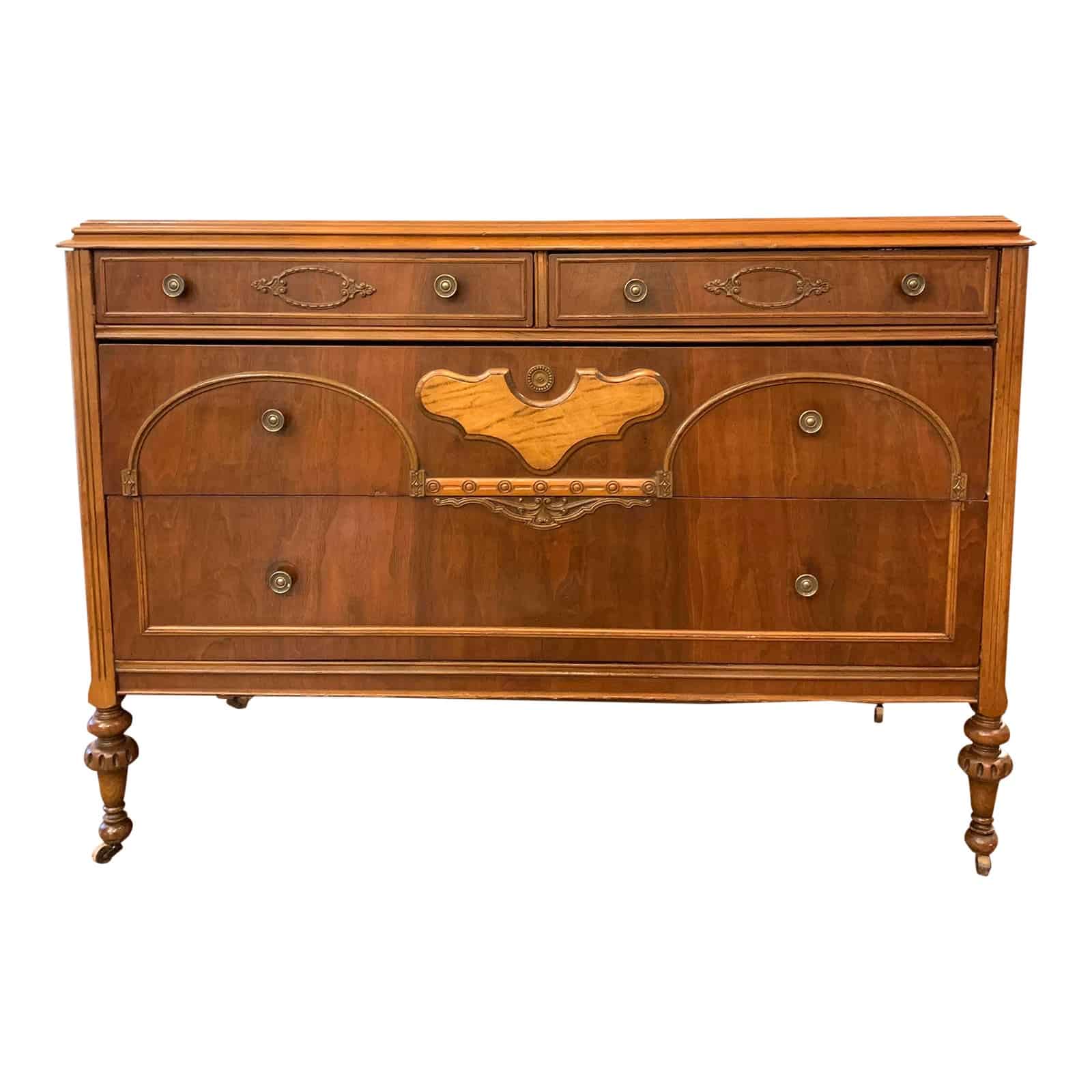 Art Deco dressers with recognizable crisp lines and geometric patterns became popular during the 1920s and the 1930s. However, craftsmen used expensive materials, like lacquered woods, veneers, steel, and glass, and made furniture in this style until 1945. Nowadays, most pieces come in a price range of $800 to $2,000.

Ways to Identify an Antique Dressers 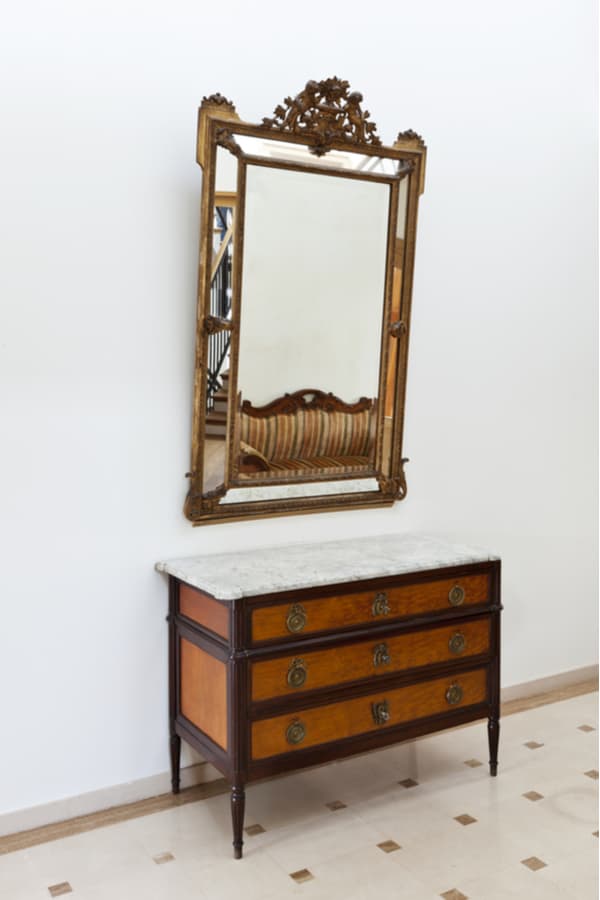 The quickest way to determine your dresser’s origin and age with great accuracy is to recognize its style.

Regarding antique furniture, including dressers, some cities were synonymous with recognizable design styles.

For instance, decorative rings on the dresser’s feet prove that these pieces of furniture were created in Baltimore. This town was a center of quality furniture craftsmanship at the turn of the 19th and 20th centuries.

The first step in dresser identification is to find s label to determine its origin. Keep in mind that the exact location and the mark style can significantly vary, depending on a maker.

In most cases, it will be enough to look underneath or inside drawers where manufacturers carved them into the wood. Sometimes independent craftsmen added hand-made ink signatures on pieces they created. You can also see custom manufacturing stamps or engraved marks in the wood.

Furniture companies typically attached labels to the dresser back, but some pieces came without them. In this case, you should determine a logo and look for similar on the Net.

You can identify your dresser based on the mark, signature, logo, or stamp, but sometimes it won’t be enough. In such a case, you should ask an antique dealer or appraiser for their opinion.

Some details, like carving, mark stamped in ink, metal plate, and paper label, can help precise origin and age identification.

Cabinetmakers used semi-circular saws to make furniture in the 1880s and started using straight saws in the 1910s. Therefore, you can sometimes date your dresser by inspecting saw marks typical for those two device types.

Remember that this way can help you determine a manufacturing year approximately, but it is impossible to be entirely accurate.

This way of joining different furniture parts, particularly drawers, is typical for antique dressers. You can approximately determine their production year based on these details. For instance, dressers created from 1861 to 1865 typically have uneven dovetails with a rough finish.

Since natural wood darkens over time, you can use that color change to determine your dresser age approximately. Additionally, old furniture’s finish loses luster over the years. Therefore, you can be pretty sure that you have an original antique dresser when it has a rich hue without reflection on the surface.

Most cabinetmakers used oak for making furniture by the 18th century. Then, they started to use other wood types, like mahogany and walnut. For instance, high-quality walnut wood became the most fashionable material for dressers in the 1670s.

On the other hand, mahogany imported from the West Indies and Honduras was trendy in the 1730s. You can accurately determine your dresser’s age based on the wood type used in its creation.

Also Read  How to Sell Ivory Antiques Legally? (An Ultimate Guide for 2023)

If you have a hand-made dresser with a rough finish, you can be sure that it was created during the Civil War. In those times, people didn’t have time to pay attention to aesthetics and details. Their only goal was to get a convenient and usable piece of furniture.

Manufacturers discovered a way to reduce furniture production costs with a new technique developed in the 1600s. Veneering was the process of applying pricey exotic wood thin strips over a cheap material.

You can recognize these pieces by their intricate geometric design or complicated pattern. Inspecting the veneer can help determine the dresser’s age since it became thinner over time. As a result, it became paper-thin by the 1900s and only 1/64 inches (0.4 mm) thick.

Joints’ construction can tell you a lot about your dresser. Cabinetmakers used different types over the centuries so that you can determine the century of furniture production based on their appearance:

The first machine-made screws appeared in 1848. Therefore, you can be sure that your dresser is from the 1700s if these hardware pieces are hand-made. In those times, blacksmiths heated and pounded square nails until getting roughly round shapes.

Screws produced from 1812 to the mid-1800s were partially machine-made. They looked more even, but their heads were finished with hacksaws. That way, they got grooves to fit a screwdriver but making two exactly the same pieces was impossible.

Screws with pointed ends, rounded shafts, and perfectly finished heads were made after the mid-19th century.

Cabinetmakers always tried to match small elements on their furniture, including feet and wooden drawer knobs. However, hand-made pieces are always slightly different in shapes, so you can be sure that such furniture was hand-crafted before 1860. On the other hand, machine-made furniture components will perfectly match.

In most cases, people have used their dressers for years, so you should expect to see signs of use. The most common way to differentiate an antique piece from a replica is to find light scratches, stains, and nicks on the wood surface.

Antique furniture is fascinating for most collectors. They are often prepared to set aside serious money to get the best possible pieces, particularly dressers.

You don’t need to be a collector to purchase such a beautiful piece, but learning as much as possible about their identification is vital. That is the best way to recognize reproductions and avoid fraud.