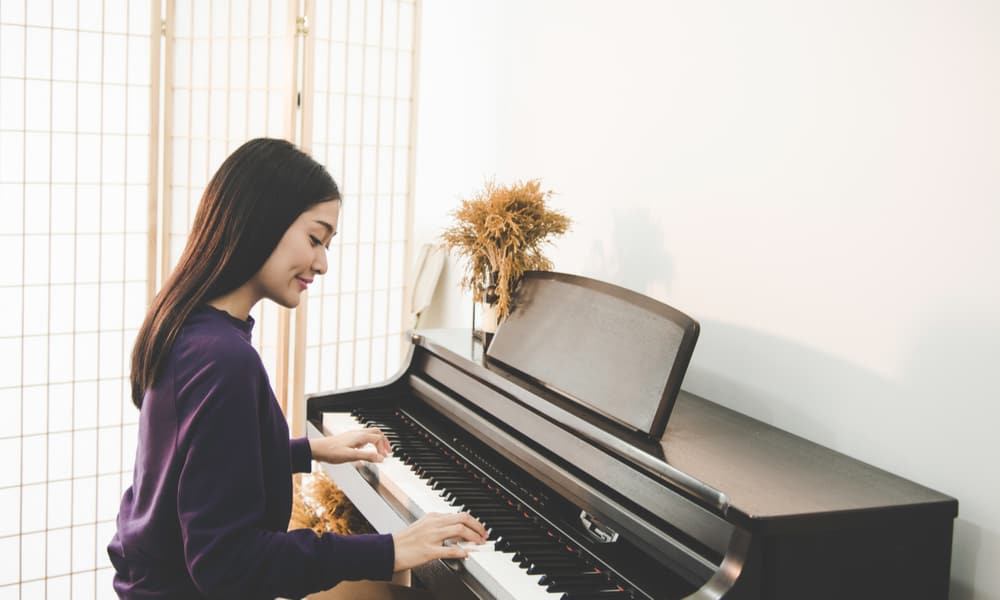 Are you curious about what kind of musical instrument the piano is? You are not alone! Even among music aficionados, there is no agreement as to whether the piano is a percussion or a stringed instrument.

While many instruments fall under a specific category, pianos are an enigma. Below, we explain why a piano might just be both a percussion and a stringed instrument.

Over the years, societies have used various systems to classify musical instruments.

Later, Eric Moritz von Hornbostel and Curt Sachs further refined Mahillon’s system and devised the Hornbostel-Sachs system. This system groups instruments based on how they vibrate to produce sound.

The Hornbostel-Sachs system has been revised severally but it remains the most popular system of classifying musical instruments. The four main groups are:

What is a Percussion Instrument?

The word ‘percussion’ means the striking of an object against another to produce sound. A percussion instrument is one that is shaken, hit, or scratched to make a sound.

In an orchestra or any other musical setting, percussion instruments provide rhythm and add zing to a piece of music.

Examples of common percussion instruments include the tambourine, celesta, gongs, bass drum, cymbals, and timpani just to mention a few.

The piano is also considered to be a percussion instrument. This is because the performer uses their fingers to hit on the black and white keys of the keyboard, which in turn causes the instrument to produce sound.

What Is A Stringed Instrument?

As the name suggests, a stringed instrument is any type of instrument that has, well, strings and produces sounds when the strings are plucked by hand or scraped by another item such as a bow.

Many stringed instruments have a wooden body and are hollow inside. This enables sound to vibrate inside the instrument. The strings are usually made of different materials  with nylon and steel being the most common ones. Examples of stringed instruments are the guitar, violin, harp, cello, and the bass.

Interestingly, the piano is sometimes categorized as a string instrument. This is because when hit, the keys lift the hammers, which in turn strike the numerous strings found inside the piano causing the instrument to produce its range of sounds.

How Does A Piano Work?

To determine whether the piano is a percussion or a stringed instrument, let’s first understand how it works.

A piano has 52 white keys and 36 black keys to make a total of 88 keys. Inside the instrument are numerous strings whose size decreases as the performer moves from left to right across the keyboard.

Although the piano has more than 12,000 parts, only three parts are involved in transforming the force applied to the key to into sound. These parts are the wippen, hammer, and key assembly.

Keys are just the black and white plastic-covered pieces of wood a pianist presses when playing the piano. The wippen relays the force of the key to the hammer assembly and the hammer then hits the string.

The size of the strings also determines the pitch of the sound the piano produces. When the performer presses a key that strikes a long and thick string, the sound produced will be subdued. This is the case with keys on the left end of the instrument.

On the other hand, keys on the right end of the piano strike thin and short strings. This in turn produces a high pitched sound.

On one end, strings are held in place by bridges that are attached to the soundboard. On the other end is a damper, which acts as a mute. When the performer presses a key, the damper lifts off the string and the bridges transfer the string’s vibrations to the soundboard. In turn, the soundboard vibrates and the instrument produces an audible sound.

Is The Piano a Chordophone?

Going strictly by the Hornbostel-Sachs system, a piano can be classified as a chordophone. Other chordophones include the guitar, harp, harpsichord, ukulele, lyre, flute, cello, just to mention a few.

What all these instruments, including the piano, have in common is that they have strings stretched between two points. However, unlike the piano, many chordophones produce sound when the performer plucks the strings with their fingers, a bow, or a quill.

A piano produces sound when hammers hit the strings. As such, one would argue that the piano is a percussion instrument. It can also be categorized as a stringed instrument because it has strings stretched between two points, and most importantly, it produces sound when these strings vibrate.

So, is the piano a percussion or a stringed instrument? We can safely say: It is both!