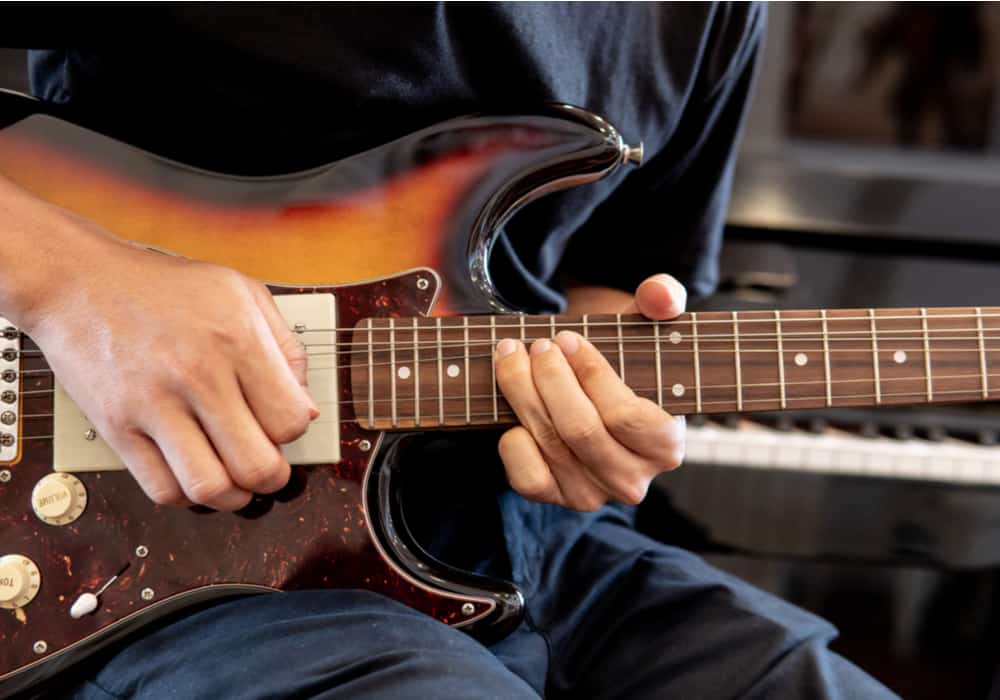 One must be in a temptation when choosing between rhythm masters such as Dave Grohl, James Hatfield, Chuck Berry, or Bo Diddle and solo guitars masters like Carlos Santana, Slash, B.B. King, or Jimmy Hendrix. It is not fair play at all! All of them are perfect, no matter what guitar they have chosen to play, nor what kind of music they perform. So, why do we confront lead vs. rhythm guitar?

Although both styles are played on the same instrument, you can hear the distinction between the sounds the performers make if you listen attentively. One doesn’t exclude the other. Therefore, it is hard to favor one, just as the parent has a problem to support one child over the other. Let’s take a closer look at the subject.

Many future guitar players have had the same problems over the years, which guitar should they play first and which one should they pick out. Perhaps the smartest answer is to start playing without overthinking.

Somewhere along the way, after you master the basics, the answer will find you. One doesn’t exclude the other, meaning you can even play both if you become skilled enough. The fortunate thing about both the rhythm and lead guitars is that you can use the same instrument and only choose a different playing approach.

Unlike the bass guitar, where the instrument characteristics are different as well as the playing, you can experiment and combine when playing the rhythm-lead guitar. The Beatles did it, and Metallica has been doing the same for a long time. Both guitarists in the band play rhythm and lead guitar. All they need is good cooperation and synchronization.

A lead guitarist may be accompanied by the rhythm guitarist or may not. There are usually two guitarists if we talk about pop, rock, heavy metal, jazz, even punk and funky. The lead one plays some single tones and single line played notes, while the rhythm plays riffs and chords.

As you can see, teamwork is of great importance for perfect performance. The solo guitar sounds empty and hollow in the band without the rhythm guitar that carries the song, like a lot of jewelry without anyone to wear it.

The rhythm guitar connects the rhythm section. Since it is in connection with drums and bass guitar, they carry the song together. The vocals often rely on the rhythm guitar not to lose the beat. Its sound is usually full and fat, opposite to a lead guitar, which is often high pitched and very precise.

Solo guitar players use different techniques when playing, although they can play on the same instrument. Some of the ways the sole guitarists create their lines are using riffs, modes, arpeggios, licks, and scales.

Besides creating solo lines, they also apply different kinds of picking, tapping, legato, slides, vibrato, string bending, and many more techniques. Each technique will add originality and uniqueness to the performer’s style.

Some performers may use some additional electric devices to ensure different sounds, such as so-called EBows, which induce the strings’ vibration and make a prolonged sound effect. Also, almost all guitar players use effect pedals to perform various special sound effects.

There is no distinctive line between a solo and rhythm guitar when playing acoustic guitar. Classical music, jazz-rock metal, and many more popular styles include both in a band. Well organized and well synchronized, these two guitars sound powerful and mighty.

The rhythm guitar plays the chords and group of chords. However, many rhythm guitar players play more complex techniques such as chord solos, riffs, arpeggios, damping, and complex strums. As you can see, there are a lot of similarities, and somehow one can’t go without the other.

As the rhythm guitar provides harmony for the band, the keyboard is often not an essential instrument in heavy metal bands, rock bands, pop bands, and punk bands. In case there is a keyboard, the rhythm guitar holding the harmony isn’t that crucial anymore. Moreover, they can often muddy the sound as they both hold the rhythm.

It may often happen that these two guitars are not synchronized well. In such a case, they can be too much together and make a crowd. In some pop bands, the rhythm guitar using delay pedals can replace the sonic sound of keyboards in the music peace.

To gain a stronger choral sound, rhythm guitar players may choose stronger strings with larger gauges. Also, they can pick different amplifiers to have a different sound from the lead guitar. These options are not mandatory, and they depend on the performer.

As its playing includes a lot of chord progression and rhythm patterns, it is easy to play both acoustic and electric rhythm guitar. In fact, the overall sound is more important than single tones in this case.

Depending on your striking hand and palm position on the string, you can determine if you want to play the rhythm or the lead guitar. Let’s look at the details. In most cases, right-handed guitarists play the strings. In this case, each finger has its own letter:

Since the left hand is for the notes, you should put your thumb on the instrument’s neck and play with four fingers marked with numbers 1 to 4. In this case, the index finger is the first and is named 1.

It will also affect the tone when playing. If the hand is in the rhythm position, you will mute the tone you have just played with your palm. The strings are not free to ring the tone as your pinky is close to the guitar and strings.

On the other hand, you can open your palm with the pinky lifted from the guitar while your thumb leans to the strings. In such a case, the strings and tone are free, and they can ring, so you can say that playing the lead guitar style.

The way you move your right hand over the strings will also affect the sound and make the difference between rhythm and lead guitar.

The so-called down-stroke over the C cord will produce a muddy but strong sound. The rhythm players often use down-stroke to use that specific sound as the music peace’s power base.

The so-called up-stroke on the same C cord will produce ringing and a more pitched sound perfect for improvisations and clear notes such as lead guitarist play.

Of course, playing the guitar is an art and a beautiful skill, and nothing is black and white. The beauty of this instrument lies in the variety of strokes, techniques, equipment, and most of all, the talent and inspiration of an artist.

Both guitar players use just the tip of the pick to play with. It is in the right hand, slightly lean downwards. Flat pick over the strings doesn’t make a melodic sound like just the tip of it.

If you are still indecisive and don’t know which guitar should you play, let’s put it this way. Do you want to hold the rhythm and be the backbone of your band? Then the rhythm guitar is just perfect for you. On the other hand, you can be a great lead guitar player if you like to roam free and play around.

If you prefer the acoustic guitar more than the electric one and you are a fan of classical music, there is no need to choose and beat your brain. All you need is to dedicate your passion and time to play.

If you are keen on full and fat sound, you should pick the rhythm guitar. In case you are prone to improvisation and are bothered with things in order, you will make a perfect solo guitar artist.

No matter which guitar you chose to play, you should always keep in mind that listening to the rhythm guitar or the other band members is what makes successful and professional players.

Both guitar styles are equally important for good vibration and rhythm. No wonder that Metallica, with two terrific guitar players who both play rhythm and solo, James Hatfield and Kirk Hammett, is still one of the best bands ever.