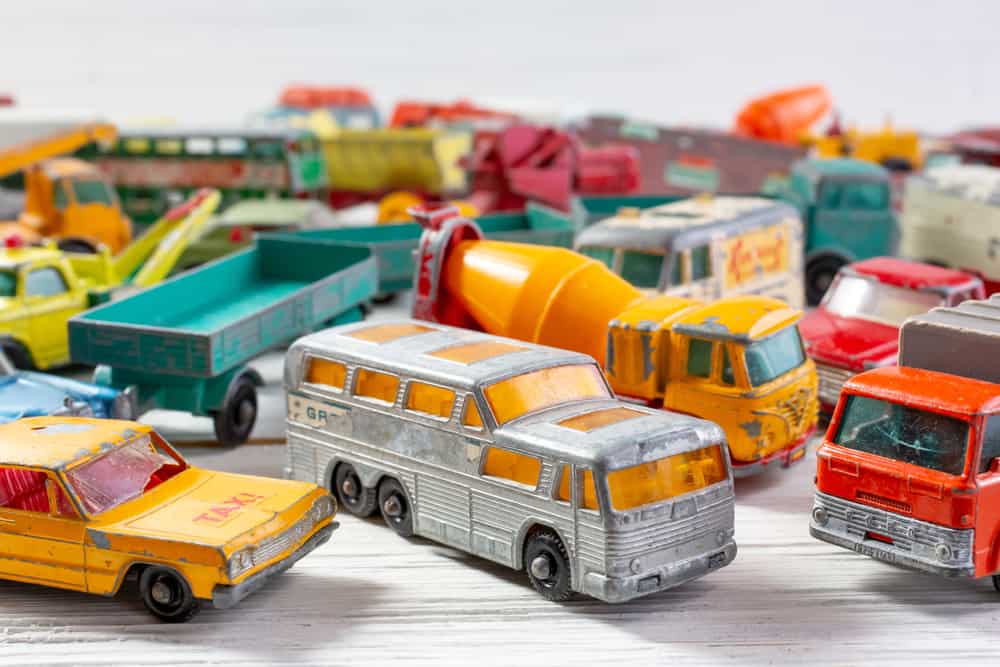 Have you stumbled across some old-school Matchbox cars? Wondering how much they could be worth? Today we’re here to help.

The value of your Matchbox car depends on the year it was created, car model, color, rarity, and condition. Newer Matchbox cars can be bought in a set for as little as $10 but, if you’re lucky enough to come across an antique model, it could be worth up to $13,000.

To better understand how to value your Matchbox cars, today we’re dissecting the history, manufacturers, and value of the brand, as well as the rarest Matchbox cars on the market.

The History of Matchbox Cars

Matchbox cars came to be in 1947. The company was initiated as Lesney Products, founded by Leslie and Rodney Smith. Lesney Products originally produced things bait presses or small parts for agricultural or car companies.

During the second world war, the company’s engineer, Jack O’Dell, decided to fill a lack of industrial orders by investigating and producing toys. Jack O’Dell had a daughter whose school only allowed kids to bring in toys small enough to fit in a matchbox. Thus, in 1948, the first tiny Matchbox car was born.

The company expanded its set of cars in the United Kingdom and was soon exporting millions of little vehicles across the world – especially to the United States.

By the 1960s, Matchbox was the largest and most popular producer of these small diecast toys. They were particularly appealing because of their accessible low price. A popular model, the Matchbox Lambretta TV175, sold for just 39 cents each.

Matchbox dominated the scene until 1968 when competing brands began producing flashier cars while ramping up their advertising. Unfortunately, Matchbox couldn’t compete with the prices and ended up declaring bankruptcy. It was purchased by Universal Internal Ltd. and later by its main competitor, Mattel.

Learn about who created collectible Matchbox cars way back when and who has since taken over the famous name.

The brand created traditional vehicles such as a road roller, cement mixer, and a double-decker London bus. In the late 60s, Lesney also began making King Size and Speed King toy cars. There was even a version of the Queen’s Coronation Coach, which sold millions across the UK.

When the 1970s hit, the company had financial troubles, like many other British manufacturers who faced high production prices. By 1982, they faced bankruptcy.

The Universal Group, led by businessman David Yeh, purchased Lesney Products shortly after its bankruptcy. Yeh renamed his group Matchbox International Ltd. after the purchase and became the chairman, taking the company public in the U.S. by 1986.

By this point in time, Matchbox cars were no longer British. In fact, much of the production had been moved to Asia. By the late 1980s, Matchbox cars had the “Made in China” stamp on all of their toy cars.

By 1992, Matchbox International was looking for a buyer. Tyco Toys made the purchase but, less than five years later, Mattel jumped on board and bought out Tyco Toys. By 1997, Matchbox cars were owned by their previous competitor.

Much to Matchbox collectors’ surprise, Mattel agreed to keep the production of Matchbox cars and Hot Wheels separate. With a long line of competition between the two, each brand was able to keep the aspects that make it unique while selling under the same father company.

Collectible Matchbox cars are valued based on their model, popularity, rarity, and color. You’ll find high prices for your Matchbox car if it’s in mint condition and comes with its original boxes than you would if it’s missing wheels.

Matchbox itself does not provide a pricing guide for its toys, but you can use some online sources to give you a general gist of the value. For example, the North Carolina Hot Wheels Association has a special page with pricing guidelines depending on the model of your Matchbox car.

ToyMart.com also has a Market Valuation Tool where you can look up your Matchbox model’s value.

It’s important to take these numbers with a grain of salt – they are estimates and are best verified by speaking with professional Matchbox collectors.

Each type of Matchbox car has a special model number. These are split into three eras:

The model number is a numeric number and letter combination. These combinations do not go in order by creation date.

As with any antique or collection, Matchbox collectors always have certain models that are more lucrative than the others. Most of the time these models are hard to find, pumping up their value.

Generally speaking, cream, tan, purple, and pink versions of Matchbox cars are worth more than other colors, because boys in that day and age did not tend to buy them. The fewer cars that Matchbox sold in these colors, the greater their price point in modern times.

Keep reading below to see which Matchbox cars are the rarest.

It’s also no surprise that Matchbox collectors will pay more for toys in mint condition. The more preserved the colors and matchbox of the car, the more it might be worth.

Some models of Matchbox cars appreciated hundreds of times faster than others. While the above factors play a part, some appreciation values don’t have explanations. The only thing we can tell you is that these models are worth a lot of money to Matchbox collectors.

Matchbox cars are still being produced today and you can find newer models on the Mattel website, through online retailers, or at brick-and-mortar toy stores. If you want to buy the collectible antique versions, however, you’ll need to go to an auction.

Older Matchbox cars are often fought over by collectors, meaning the highest bidder takes home the prize. Auctions are found worldwide, but primarily in the U.S. or Great Britain. Many auctions are now done online through sites like eBay, but you can also find in-person auctions.

To find an auction near you, do a Google search for some of the following phrases:

Try replacing “me” with your zip code for more detailed search results.

Some of the most expensive models are the Magirus-Deutz Truck, the Opel Diplomat, and the BP Dodge Wreck Truck. You’ll want to look out for lighter colors like cream, pink, yellow, tan, or even light greens for the highest valued cars.

If you think you have a piece of Matchbox history in your possession, check an online guide and contact a Matchbox collection professional to have your car assessed today!