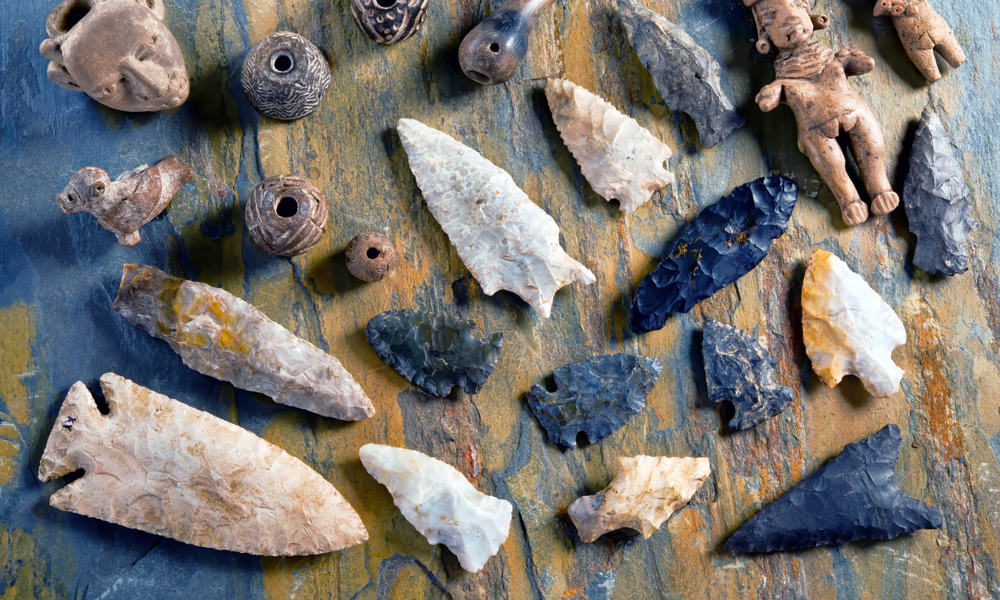 Have you heard of Pfeilstörche? These are Bavarian storks with spears stuck in their necks. Scientists used these birds to discover their migration patterns from Africa to Europe. It was a revolutionary bit of knowledge, but we’re more interested in the arrowhead than the shaft.

When we think of the most valuable rare arrowheads, we focus on evolution and the hominids of the past who invented tools. But you can find arrowheads among indigenous communities that still practice traditional hunting techniques. So let’s go shoot some arrows!

Most Valuable Rare Arrowheads Worth Money

Around the world, you’ll find communities like the First Nation (Canada), Inuits (Greenland, Arctic), Maasai (Tanzania, Kenya), Oceanians (Australia, New Zealand), and tribes from Polynesia and the Amazon. They maintain their heritage, including traditional arrowheads.

But here in the US, the most valuable rare arrowheads come from Native Americans. You can find contemporary authenticated pieces, but you can also bump into fossil finds in areas with rich archaeological digs. You might even stumble upon arrowheads lying around old farms.

But while you’re trading arrowheads, you can make money on related items spears, and other weapons. Bird stones, banner stones, and boat stones sell especially well. These weights were attached to spears or javelins so they could travel further, and faster while carrying more force.

These stone weights were part of a tool called an atlatl. And the particular one above is shaped like an arrowhead, so you can convincingly categorize it there. With pieces like this, it’s worth getting a professional evaluation. Buyers want proof that it’s not just a pretty rock.

On the subject of arrowheads that are not quite arrowheads, let’s talk about Clovis points. These ancient arrowheads were first found at Clovis, New Mexico, in 1932. Experts believe they’re 10,000 to 13,500 years old. They discovered maybe 10,000 units in total at that dig.

These weapons are classified and labeled as arrowheads for convenience, but lots of them are designed for spearheads and javelins, so they’re better described as projectile points. An atlatl – which we mentioned above – was typically used to launch these sharpened stones.

Dalton and Folsom arrowheads are another top find for collectors. But Clovis points are the easiest to spot because they have a groove at their base called a flute. This made it simple to attach the arrowhead to the tip of a spear, arrow, or dart. The flute goes halfway up the head.

Clovis arrowheads are also larger than other specimens. They can be up to 6” tall and 2” wide with a concave surface on the flute end. The curved sides of the arrowhead taper towards the tip. This makes its midsection its widest point, and the slicing action makes it more effective.

Now that you know how to identify Clovis arrowheads, let’s look into the other two types we’ve mentioned. Dalton arrowheads are shaped like fish. They have a broad middle, just like Clovis, but they also have an inward curve near the base. They’re from 10,500 to 8,500BC.

As for Folsoms (9,500 to 8,000BC), their flutes were crafted more carefully than those Clovis bases. They also have distinctive grooves on their sides. Finally, we have Plano arrowheads from the plains. These were far simpler weapons crafted from flaked stone without flutes.

It’s easy for someone to fake an arrowhead. And while some of the ones you’ll find in the wild are genuine, they’re likely to be flint or chert arrowheads. Because these are younger and are pretty common, they’re not that valuable as a collectible, so you won’t make much reselling.

Ideally, a Clovis point would be perfect. The first set was found in 1929 by Ridgely Whiteman. But most of these precious arrowheads are in the hands of collectors and are out of circulation. Instead, look for unusual crafting materials like jade, petrified wood, or jasper.

To date, the most valuable rare arrowheads ever found were Clovis points. The one found by Les Ira Kreis sold for a good $276,000. He found it during the 1950s while working in a Badger Mountain wheat field in Washington. The 2013 sale was sealed at a Morphy Auction.

This arrowhead is treasured because at 9”, it’s among the largest intact pieces in existence, and it’s made from a sea green shade of obsidian. You may wonder exactly how ancient cultures made the arrowheads. They would heat the stone and then hit and hammer it into shape.

The arrowhead-making process had three stages. The first was flint-knapping, where you would start with a big rock and bash it to break off smaller pieces. The second stage was pressure flaking when you would use tools to chip off pieces, making the arrowhead thinner.

As the weapon got slimmer and flatter, you could sharpen the sides and edges, adding any important features like grooves or clan symbols. The final step is sometimes called notching. You could make slots to hold the twine, or you could carve out a sharp serrated edge.

How did they make these weapons without modern machinery? To make the arrowheads, hunters used tools made from the horns, bones, and antlers of local wildlife such as deer, moose, or impalas (in Africa). Start off with a rounded hammer stone then move to bone.

The base of a horn or antler works well for broad work, and the narrower tips are best for finer details. Today, lots of people flint-knap for pleasure. But avoid using metal tools like hammers or chisels. They’re too fast and forceful, so they’re likely to shatter your host rock.

You’ll see a lot of sites describing the fish shape of a Dalton arrowhead. Sometimes, it’s puzzling to understand these explanations without a photo. But why did these projectile points have a fish-tail curve near the base? Well, they didn’t have attachment flutes on them.

Instead, hunters would use pieces of tendon or twine to tie the shaft to the arrowhead. The rope would be wound around the waist, that inward curve that’s close to the bottom. Daltons also had a sharp tip that would break off on impact, so many finds have that bit broken off.

If you’re looking for a book that tells you more about the most valuable rare arrowheads, try The Official Overstreet Indian Arrowheads Identification and Price Guide. You could also check the Artifact Resources Tab at Arrowheads.com for help with identification and pricing.

This book can be useful for scouring sales online or when you’re out in the field. You might be physically hunting arrowheads and you can look up their likeness in the book – it has lots of high-res reference photos. But be sure you’re allowed to pick arrowheads where you are!

The point above may have startled you. After all, YouTube is flooded with videos of people excavating all sorts of sites for antique bottles, gold flecks, and yes, arrowheads. You’ll even find tips about hunting at Native American campsites, near rivers, or in roadside ditches.

So where does ‘allowed’ come into it? Think of it this way – as you rifle through Native American sites, you may be disturbing holy sites like burial grounds, which is disrespectful. Would you want any random person digging up your grave or snooping through your house?

Another factor to consider is legality. If you’re arrow-picking on private property, you may need the owner’s permission. Otherwise, they may take you for a trespasser and respond accordingly. Besides, anything valuable you find on their land technically belongs to them.

Also, some local governments have laws about leaving relics and fossils where they are. It’s about retaining cultural value. The county may want to turn the spot into a museum, lease it for tax reasons, or set it up as a formal archaeological site. So be sure to get authorization.

Once you’re sure that it’s okay to hunt for arrowheads in your region, you’ll need to find the best spots. Rivers and streams are good because they’ll have tons of arrows that sunk while harpoon fishing. Rain may also carry arrowheads into the water and dump them there.

The best time to look is after a heavy downpour because it exposes buried items in fields and among rocks. It also washes them down to more visible spots. If you’re looking in the river itself, wait until the water level is lowest or the bed is dry so you can see your booty clearly.

People within the industry will refer to these pieces as points rather than arrowheads. We mentioned earlier it’s because the points were used on spears, darts, and other projectiles, not just arrows. And once they got blunt or broke, they may be converted into scrapers.

Scrapers were useful for – say – skinning an animal, peeling vegetables, or scrubbing plant-based fibers. You can differentiate arrow points, spear points, and dart points by their size. Spearheads were the largest and heaviest while tainted darts could be quite small and subtle.

The thing with arrowheads is they’re easy to fake. And if you find one on the farm while plowing, it might only be worth a few dollars. But if you bump into a genuinely valuable piece, your profits could run into the thousands considering you got it in the wild for free.

But you still need an expert, because anyone can put up a thousand-dollar listing like this one. And if it’s counterfeit (or if you’re wrong about its value), your arrowhead will sit on the auction site for years. That’s why using the ‘sold tab’ is so important. It shows what moves.

What’s a COA? You may have seen it mentioned on arrowhead listings or other collectibles. It means Certificate of Authentication, and there are various ways to get one. It could be a sales receipt from a verified dealer. Or a report from a recognized professional appraiser.

But some Native American artifacts are contemporary, and these may include jewelry and points. They use traditional techniques to create modern pieces. They come with the artist’s name, their pueblo (or tribe), and a formally signed document verifying the piece as authentic.

Just because a piece is beautiful, verified, and in demand doesn’t mean it’s the most valuable rare arrowhead. And this piece is the perfect example. You can see it drew a lot of attention – nearly 50 bids! But it barely sold for $100. What’s the deal? Well, you need market interest.

Before you go off gathering tons of arrowheads, look around. See what collectors want. The reseller space travels in cycles and seasons, so there are times when a particular material, site, or style is popular. The condition of your arrowhead matters too since it’s for display.

Suppose you find a batch of arrowheads that doesn’t look too fancy. And maybe your expert tells you they’re only worth five to ten bucks a piece. You can improve your profit by selling them as a bundle like the seller has done here. You could even throw in some pricier pieces.

Axe heads are a smart value-add if you can find them. They’re larger and more versatile than arrowheads, so they’ll fetch a higher price. But while you’re discounting your asking rate, count the weight of the batch – it could lead to high shipping costs that will swallow profits.

Tops Tips About the Most Valuable Rare Arrowheads

As you position yourself to resell rare arrowheads, try these proven tactics:

Do you have any advice on the most valuable rare arrowheads? Tell us in the comments!

1 thought on “19 Most Valuable Rare Arrowheads Worth Money”