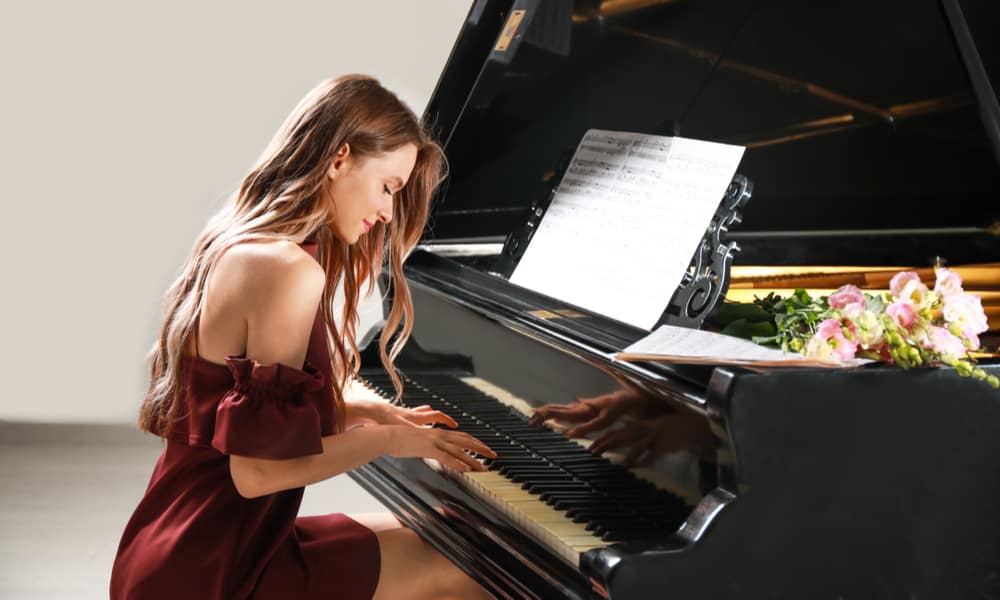 When you think of classical piano songs, are you thinking about historical music eras or fancy-sounding orchestral pieces? For most of us, we’re focused on the latter, and that’s what we’ll talk about in this round-up. But just for your general knowledge, there are actually seven or so eras in music history. Let’s summarize them below, with examples of artists and composers.

As we’ve mentioned, we’re going to look at piano pieces that cut across genres, though we won’t include contemporary piano pieces, those are in a separate article. Let’s start with a quick list.

Many piano pieces get nicknames based on their mood and reputation. And the First Movement of Beethoven’s Piano Sonata No. 14 in C# Minor is pretty popular. It’s a dark, mournful piece and Beethoven intended for it to be played adagio sostenuto – with slow, sustained triplets.

The Schumann most of us are familiar with is Robert. But his wife Clara was a gifted composer and pianist as well. This Piano concerto in A Minor Op. 7 is among her best-known pieces and is a gem of the Romantic Era when expression was key, pun intended. It’s a complex piece for advanced players, so have a listen before you get yourself stuck in a tutorial rut.

This piece is commonly played as a wedding march. Or you may have heard it nicknamed ‘braveheart’. If you’re a younger player, you may be more familiar with the viral version by that Korean YouTuber. The piano version we’ve linked to above can allegedly be mastered in 5 days (if you rehearse for 2 hours a day) so good luck and use headphones to spare your roommates!

When you find out it took Debussy three years to finish the 3rd Movement, you may wonder how that’s possible. Especially if you confuse this piece for a similarly-named children’s song, Au Claire de la Lune. This Debussy piece is slow and expressive, but the pacing is tricky to master.

The 1st Movement Opus 106 No. 29 is nicknamed ‘hammerklavier’ which means ‘hammer keyboard’, an old German name for the piano. This is one of his most complex (and longest) pieces so leave it for later in your piano practice. The piece is written in B♭Major.

Johann Sebastian Bach wrote 48 piano preludes and Beethoven wrote 32 piano sonatas. These are all dedicated solo pieces for piano, so you’ll see their names pop up a lot on this list. This first prelude is slow, simple, and melodic so it’s good from practicing the correct finger form. The piece is sometimes nicknamed the ‘well-tempered clavier’. A clavier is a type of keyboard.

Casual listeners often bump into the best classical piano songs in elevators, malls, or as background music on TV. But they have long, complex names, so when you see it listed, you may think it’s a strange piece. Give this nocturne a listen, you’re sure to have heard it somewhere. Like many romantic era pieces, it focuses more on expression than crisp timing and rhythm.

These days, we chant ‘eat the rich’ a lot. We also play white noise or ‘ocean sounds’ and ‘rainforest breezes’ to help us sleep. But in the days of Bach, you could hire an entire orchestra to lull you to sleep. These variations were written by Bach to be played by Goldberg and help Russian ambassador Count Keyserlingk fall asleep. It has 30 variations for finger practice.

Did you think we invented the remix? Or sampling? Well, Beethoven dabbled in the art when he arranged Antonio Diabelli’s waltz for piano. It took him five years to finish, and one of the variations even has a Mozart sample snuck in. The sample is from Don Giovanni.

As a child prodigy, it’s easy to assume kids can play Mozart. Music lovers also enjoy the simplicity and clarity of his compositions. But his pieces still need virtuoso levels of skills so they don’t make many lists of teachable pieces. But Mozart himself considered this a piece for beginners, so give yourself enough time and be patient – it’s worth the effort in the end.

Here’s another common piece you’re sure to have heard. The left-hand sequences may seem complex because you’re used to playing chords. You still are – they’re just broken up into arpeggios. The proper name for this piece is Bagatelle No.25 in A Minor. It was published posthumously and is considered a keystone piece for beginning piano players.

In pop culture, Snow Patrol’s ‘Chasing Cars’ is a trope soundtrack for sad death scenes. In more ‘elevated’ film, Chopin’s funeral march is sure to pop up. Especially during death row scenes and execution sequences. It’s formally known as his Piano Sonata No. 2 in B♭Minor, 3rd Movement.

Robert Schumann wrote the Kinderszenen with kids in mind. The motifs and melodic ideas are simple enough for childlike ears to enjoy … but also for beginning pianists to learn. Träumerei is the 1st miniature, and one of the most recognizable ones. The piece is about a child’s dream.

‘A little night music’ is considered a staple of classical music. It’s probably one of the first pieces you ever recognized. And while it’s an orchestral piece, he arranged a version for piano. It’s a ‘dumbed down’ version that’s far easier to learn but loses none of its magic in translation.

This is a piece Mozart specifically composed for piano, and we’re sure it’s familiar to you. It’s the 3rd Movement of his Sonata No. 11 in A Major. It’s a quick piece with lots of ornaments. Playing it will instantly lift your mood, with its cheerful tone and dance-like lilts that mimic street bands.

Sometimes, you want a piano piece you can get lost in. One that shows off your skills. This is a good choice for your ‘trophy case’. It’s a modern post-war piece (1920s) with a jazzy sound, but because it’s a piano piece, it’s still loosely classed as … classical … pun intended. It’s in F Major.

Here’s another show-off piece with a more ‘traditionally classical’ feel. Beethoven straddled the late classical and early romantic eras. Emperor – Piano Concerto No. 5 – is his last concerto. You can almost picture his crazy hair bouncing as he plays … which is almost every top concert pianist has recorded a version of this piece. So if you can learn it, consider yourself a pro!

19. Piano Sonata in A Major – Schubert

This spirited piece isn’t how you’d expect piano music to sound. The sonata has an energy and verve to it that isn’t often attributed to the soft, genteel piano. But Schubert bridged the classical and early romantic periods, so his music is still intimate and geometric but also expressive.

What’s the first song that comes to mind when someone says ‘lullaby’? Chances are it’s this piece. He names it Wiegenlied or ‘cradle song’ and it does have designated words, though most of us substitute them. When it was first performed, Clara Schumann played the piano portion.

You’ve definitely heard this piece. It’s from a famous Russian ballet and once you play the first few notes, your listeners will probably hum along. Lots of cartoons are made out of it too. The piano version is simple enough for beginners and familiar enough to charm amateur audiences.

Speaking of piano pieces that sounded decidedly familiar, this piece by Erik Satie is fairly ubiquitous. The piece feels modern because you’ve heard it in so many movies and commercials as mood music, but it’s from the late 1800s. There are three gymnopedies, but No. 1 is the most famous. The music is pensive and mournful, so it’s easier to learn that quicker, brighter ones.

The 1-2-3-1-2-3 pattern of the typical waltz is oddly comforting, so this cheerful piece by Shostakovich is a good way to raise your spirits during rehearsals. The repetitive motifs help you build up muscle memory while getting good at rhythm and pacing. It’s a good practice drill.

There’s a funny story about Brahms falling asleep during a performance by Liszt. It wasn’t this piece though. This piece – Dream of Love – is a haunting, mournful lament set to a poem by Ferdinand Freiligrath. The notes are slow and melodic, making it an easy piece to learn.

Opus 64 No. 1 is the formal name for this immensely familiar piece. The flitting notes will register in your mind from a billion places. Playing it – however – needs dexterity to let your fingers flow over the notes without losing fluidity or crispness. Think of it as the ‘spider finger guitar exercise’ for piano and incorporate chunks of its trills into your daily rehearsal routine.

Here’s another piano piece from Chopin. But its mood is different. It’s sadder and darker … but also slower, which makes it easier to learn. Slow pieces are good for beginners because there’s less pressure to overwork your fingers. But they present a challenge with rhythm and pacing because it’s easy to lose tempo when your melody is this slow and seemingly unpredictable.

27. In the Hall of the Mountain King – Grieg

It’s always fun to bump into a familiar piece whose name you didn’t know. Close your eyes for a second and think of the most common ‘suspense’ music you know. This is probably it. Except when you play it at a recital (rather than a soundtrack) it makes you look far more accomplished. Plus, it’s easy-listening, but it’s a tough piece so be patient with yourself!

Think of some cartoon you watched once upon a time that had a Bugs Bunny, Woody Woodpecker, Daffy Duck, or Tom (and Jerry) playing the piano. They were probably playing this piece. It’s tough to learn, but it’s immensely impressive, whether you’re playing for a musical crowd that understands its complexities … or a non-musical group that recognizes the tune.

For expressive practice, this sonata makes the ideal sample piece. It starts off mild and hushed then grows into explosive chords and rhythms. This period is from the center section of Beethoven’s piano repertoire. It’s musically described as ‘full of drama and tension”.

In this list, we’ve looked at pieces by both the Schumann’s, but here’s an interesting piece of trivia. Clara was a professional pianist before her marriage. And the man that was besotted with her often wrote pieces for her to play – including this one. She went by Clara Wieck when she first attempted this love song, composed in her honor. He must have loved hearing her play it.

Because she was a respected pianist and composer in her own right, many of their contemporaries wrote pieces intended for Clara. Brahms had known the couple since his 20s. So as Clara got older and lost some of her celebrated dexterity to arthritis, her friend Brahms wrote this simpler piece so she could play without pain. She was 74 when Brahms wrote her this piece.