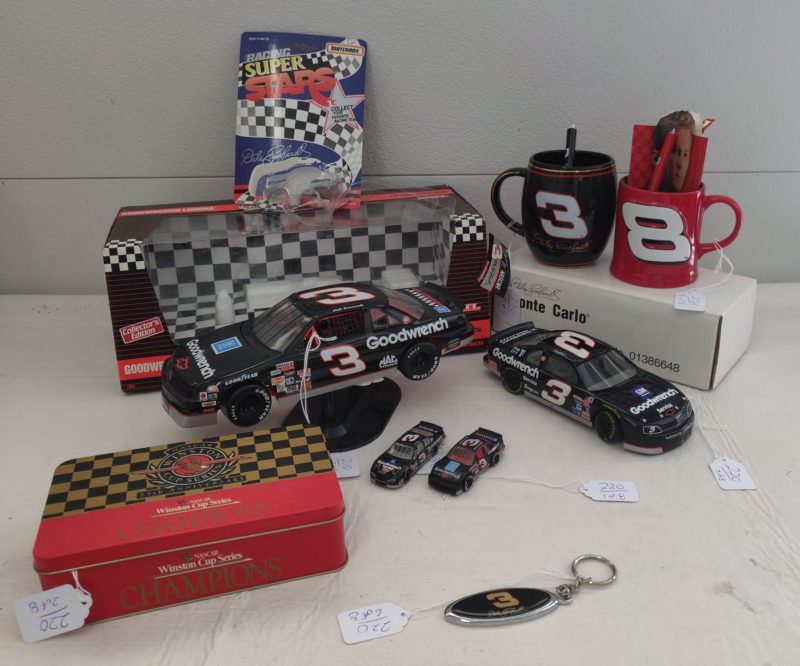 Dale Earnhardt Sr. was a Nascar star who crashed in a blaze of glory during the Daytona 500 race. He’s the second Ralph Dale Earnhardt (his dad was Ralph Earnhardt and his son is Dale Earnhardt Jr.) and he won tons of trophies in his four consecutive decades of racing.

He’s one of the most popular drivers ever, and although he was only 49 when he died, his collectibles sometimes sell for thousands of dollars. So whether you’re a fan or a profiteer, here are some of the most valuable Dale Earnhardt Sr. collectibles to keep an eye out for.

While Dale Earnhardt Sr. is considered the best Nascar driver of all time, his son is making quite a name for himself too. So if you’d like to shore up your Earnhardt collection, you could check out this father-and-son set of knives for speculation purposes. It comes as a set of 10.

Each of the switchblades is signed by either Dale Sr. or Dale Jr. and the blade handles have images of their famous race cars. The blades also have the names of the sponsor for that particular car. These sponsors include Bud, Goodwrench, Wrangler, RCR, and ACDelco.

Although the most valuable Dale Earnhardt collectibles once sold for $75,000, you can shift pieces for between $200 and $500. You can also gather smaller pieces for as little as $5 and stash them for future sale. This t-shirt was probably worth a few bucks when it came out.

It sports one of his nicknames, The Intimidator. They called him that because he was such a rough driver that he would sometimes steer into the grass to overtake his rivals. The t-shirt size is medium, 24″ long, and 18″ P2P. The back of the t-shirt has his tour venues listed.

Apart from The Intimidator, Dale Earnhardt Sr. had other nicknames that include The Man in Black and Ironhead. Ironically, his gruesome final crash led Nascar to improve safety standards across the board. But as a champion driver, models of his cars sell for a good sum.

In 1988, Dale swapped to an all-black car sponsored by Goodwrench. The Nascar Winners Circle issued a collectible set of two model cars featuring Johnny Cash and Dale Earnhardt Sr. on the sides. The car was branded with his race number, 3, and had tiny Goodyear tires.

The most common Dale Earnhardt memorabilia include jackets, trading cards, caps, and signed tickets. But seasonal merchandise can end up being worth a lot as well. This rare sweatshirt could be headed in that direction. It’s a Monte Carlo sweatshirt with a blank back.

The sweatshirt is an adult size XL made in the USA. It’s a black polyester-cotton blend with Dale’s signature and his black car at the checkered starting line. The car is flanked by spark plugs and lightning bolts, and the color mix of red, black, and electric purple is super cool.

Indeed, Dale Earnhardt’s clothing frequently hits the thousand-dollar mark, but those are usually outfits he physically wore. One of his race-day jumpsuits was valued at $20,000 by the Pawn Stars, though the owner was hoping to get closer to one hundred grand for it.

That said, you can buy one of his jackets for about $100 to $500. An while you’re at it, consider investing in some of Dale Earnhardt Jr’s jackets – their pricing is sneaking up as well and in a few years, they might be worth more than his dad’s. Some of them already are!

Even if you’re not a sports fan, you should pay attention when you’re rifling through the attic or the bargain bin at your local store. Some of those old magazines could become money mints if they have cover photos, interviews, and stories like this one on Dale Earnhardt Sr.

Dale Earnhardt Jr. founded a racing team and an incorporated firm that handles his dad’s racing history (as well as his own), so when you get a signed piece like this, check that it’s PSA/DNA is verified. That pushes prices higher. The cover photo has Dale Sr. and his wife.

Racecar drivers know a lot about cars. Yes, they have a team to do all the work under the hood, but they still need to be extremely familiar with their wheels. It’s the difference between winning a race and ending up in the ER. So a set of wrenches is a logical souvenir.

Practically speaking, you’ll love using these wrenches because they’re good enough for Dale Earnhardt. And as a collectible, they look amazing hanging on your wall and make a great conversation piece. Besides, your kids can inherit them later when they’re worth millions.

You’ve probably heard someone say ‘Been there, done that, got the t-shirt!’ Or maybe you watched some poor misguided attack a girl for wearing a band/gaming t-shirt. ‘You’re just doing it for attention. Name all their songs.’ (Just use the band as an ice-breaker, dude!)

With sporty t-shirts, the girl can at least pawn it when she gets broke. And this one is worth a lot, and climbing! Unlike most merch, it’s brightly printed on both sides. It shows The Intimidator’s car and mentions the race – Brickyard 400. It’s well-worn though, so wash it!

Dale Earnhardt won 7 Winston Cups. Only two other drivers have done this – Jimmie Johnson and Richard Petty. And this jacket celebrates one of Dale’s wins. It’s an XL jacket, pre-owned but in good condition, whether you want to wear it or mount it in a glass case.

As a fashion item, it’s warm enough to be functional, and its red-black-white stripes allow it to match anything in your closet. The jacket is 100% cotton and has a red satin lining. Like most verified memorabilia, the jacket has Dale’s signature embroidered on the upper right.

In fashion terms, some people like to actively curve the brims of their hats while others wear them flat. But functionally speaking, snapback hats have flat brims while baseball caps come pre-curved. In Nascar, it’s all about snapbacks, and this Dale Earnhardt one is right up there.

The cap is made in Sri Lanka, but that signature is genuine, and it’s authorized merchandise, so it does count as a collectible. It’s a used item with a small stain, but some users consider that a sign of authenticity. The checkered flag that floats onto the brim is a nice visual touch.

You may be looking for Dale Earnhardt merchandise because you’ve seen samples selling for hundreds of thousands. But those are mostly rare pieces like vintage chocolate bars and tires from cars he actually drove in races. But pieces like this press print can sell for a lot as well.

Press plates are used to print t-shirts and stencils, so manufacturers keep a close eye on them to avoid copyright infringement or mass-produced knock-offs. This press plate is a photographic one in the winners’ circle, with Dale popping off some celebratory champagne.

In the fashion world, items with defects get off-loaded in third-world countries and charity stores. But in the merchandising space, flaws can turn an item into a collectible! Take the example of these apricot-colored Dale Earnhardt #K2 Ford Victoria. It was a color error!

The #K2 is the first race car Dale ever drove, and it was released to mark his 50th racing anniversary. It was David Oliver’s car, and Dale’s dad (Ralph) built the engine. The roof was also meant to be apricot, so the accidentally unpainted grey turned into precious collectibles.

Just by looking through this list, you can tell how easy it is to source Dale Earnhardt’s signature. It’s printed and/or embroidered on every piece of merchandise there is! So when you have a piece that’s autographed, it needs to be checked by PSA/DNA  for verification.

This doesn’t necessarily mean they ran a DNA test on the card – that could damage it! But it means a representative of the PSA/DNA was physically present when the card was signed. You also get a PSA/DNA certificate, and that shoots the price way up!

We’ve just talked about the importance of PSA/DNS certification. It probably means the souvenir was part of an official series that the celebrity had to sit in an office and sign by the hundreds. But sometimes, you catch an autograph ‘in the wild’ by bumping into a celebrity.

This type of souvenir is technically worth more, but only if you can prove it’s real (say, with a celebrity selfie). This particular piece claims to be a wild one accompanied by a signed trading card to up its value. Without the signature, it’s still worth about a hundred bucks.

Once upon a time in 2021, a signed Dale Earnhardt trading card sold for $3386. Another 1988 specimen sold for $75,000. So the average collector salivates at the very sight of a card connected to Dale. Still, you’re safer getting one like this, which is confirmed by PSA/DNA.

This card was released after Dale’s 5th Winston Cup win (he earned 7 in total, a standing record). The reason this particular card costs so much is that it’s a prototype. This was the template they used to test the waters before issuing trading cards in this style. It’s the stencil!

Some people buy merchandise as an investment. So as soon as it gets home from the store, it gets locked away in a vacuum-sealed box or glass case. Others buy these items for daily wear, and may not know their value until someone points it out. This hat is one of those cases.

It’s a well-worn hat and was low-quality to begin with, so the black has faded to a reddish-brown and the brim has a few stains. But its historical significance still makes it a good collectible. You may have to steam-clean, dry-clean, or disinfect it before displaying it though.

The world lost Dale Earnhardt Sr. in 2001, so souvenirs from that year and the year before became quite significant. Also, because Dale was The Man in Black, this colorful model car is an unusual specimen. This is an exact model car, meaning it’s intended for adult collectors.

What’s the difference? Well, the trunk and bonnet can open and the undercarriage is realistically rendered. Don’t let those vivid colors – this is not a toy for kids. They would wreck it in minutes, eat the moving parts, and end up in hospital. Keep it locked away!

Do you own Dale Earnhardt collectibles? Tell us the story and share photos in the comments!

2 thoughts on “17 Most Valuable Dale Earnhardt Collectibles Worth Money”