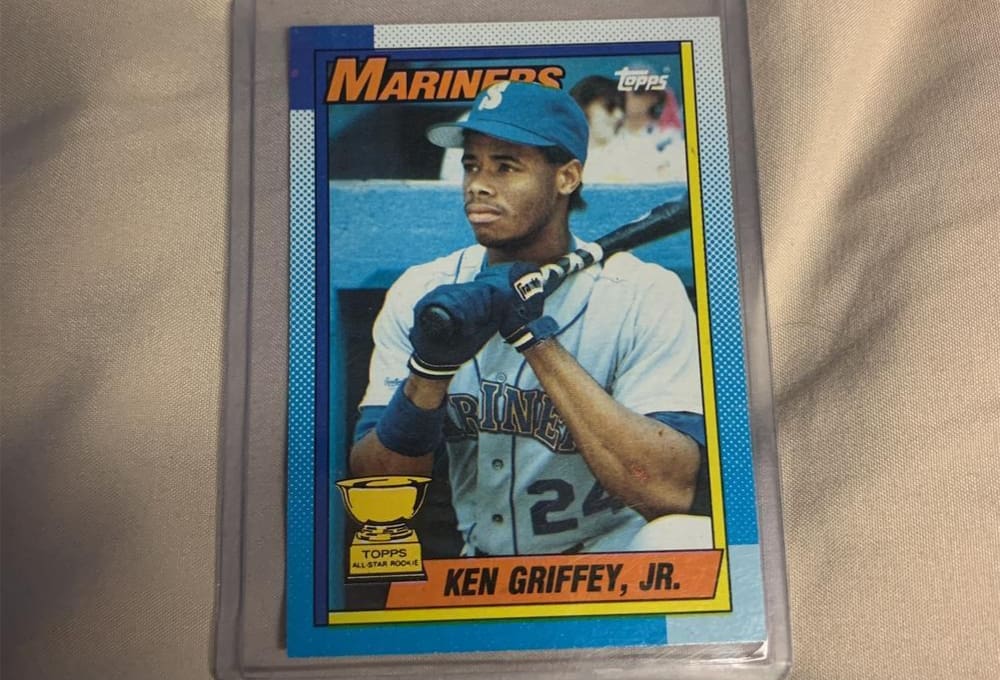 But with lots of different designs on the market, how do you know which ones are valuable? And just how much could they be worth?

If you’ve been wondering about the answers to those questions, you’ve come to the right place! We’re going to explore 15 of the most valuable Ken Griffey Jr baseball cards sold in recent years. And we’ll tell you just what it was that meant they commanded such a high price.

So if you’re ready, let’s find out more! 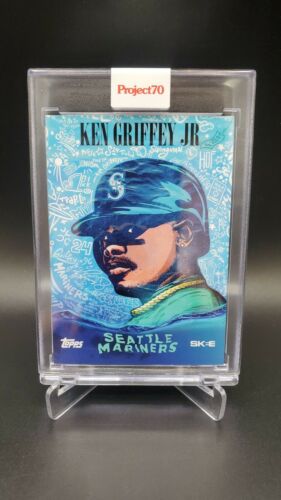 This striking design (pardon the pun!) shows a head and shoulders drawing of Ken Griffey Jr by DJ Skee. The card was produced by Topps as part of their Project 70 series. And it was an exceptionally limited run.

That means it meets one of the key criteria for baseball cards of Griffey – or any player – to grow in value: scarcity.

As more and more people began to see that baseball cards could become collectable, more copies were set aside for safe keeping. As a result, many aren’t rare – and that keeps prices low.

This example, on the other hand, was produced in a super-short run of 24 cards. This one is numbered 14 of 24.

The card itself is also in excellent condition – it was graded near mint by the seller. It was only produced in 2022, as a collector’s edition. But it was nevertheless snapped up when it was offered for sale on the secondary market later the same year.

The seller was originally asking $5,000 but settled for a lower offer. 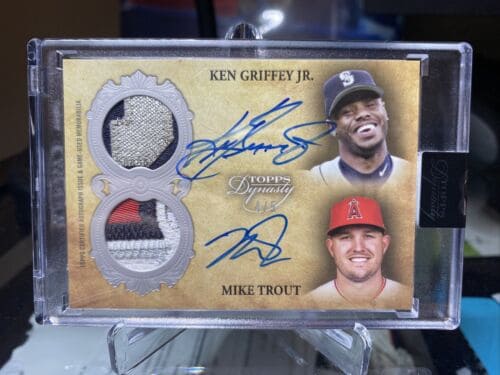 This is another card produced by Topps very recently. It’s one of their Dynasty series and features not one by two players. Ken Griffey Jr and Mike Trout are both pictured. And the card also contains a fragment from the great men’s baseball caps.

That gives these cards intrinsic rarity – there are only so many patches you can cut from something like a baseball cap! And indeed, only five were ever made, making them instant collectables. This one is numbered 4 of 5.

If that were not enough, the card also features the autographs of each player.

It comes in its own transparent plastic case for safe keeping. The case has a noticeable scratch on one corner, but the card itself is in near mint condition.

It came up for sale via an online auction site in 2022, and there was lots of competition. After 46 bids the auction timed out. The final hammer price was $3,700. 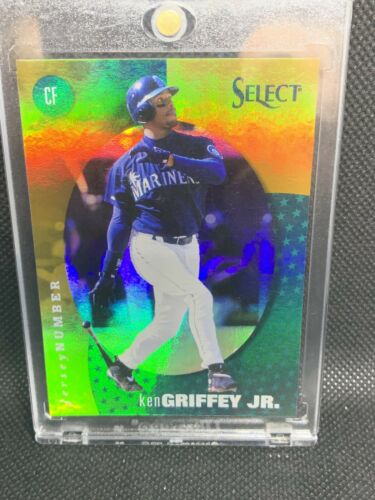 This card from Pinnacle’s Select series is an example of a bona fide older card that’s really appreciated in value. Unlike modern day collectables that are produced in tiny numbers, this one wasn’t expensive when it first came on sale. But it commands a premium price today.

It shows Ken Griffey Jr in a full-length action shot, wearing his Seattle Mariners kit. It was card number 116 in the series. And today there are few survivors. 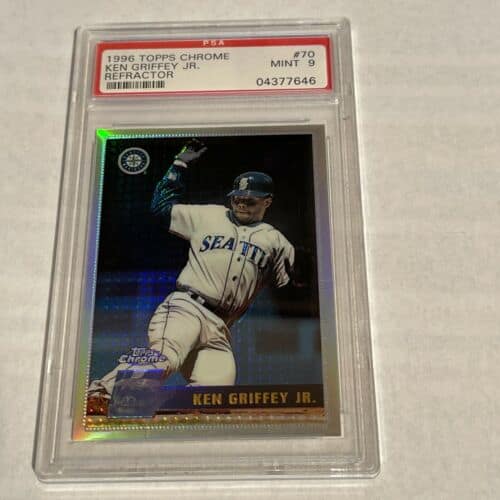 This 1996 card is from the Topps Chrome series, and it was the 70th card produced for that line. It was issued as a short print run, designed to appeal to collectors. But this one has done pretty well in holding its value.

It was in mint condition when it came to the market in 2022, protected by a sealed plastic case. Offered for sale at $2,500, the seller accepted a lower offer.

It would probably have changed hands for a higher sum in years gone by. But that $2,000+ price tag is still not to be sniffed at! 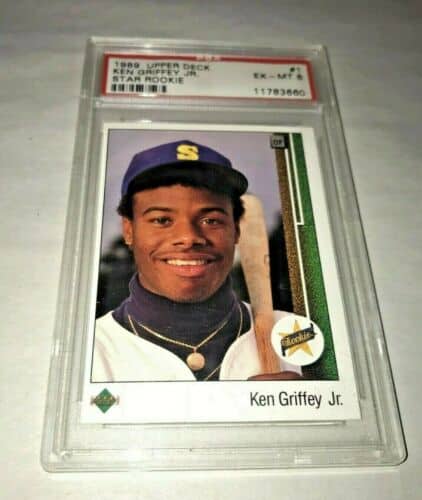 You can find lots of versions of this 1989 Upper Deck baseball card featuring Ken Griffey Junior online. But what makes this one special is the color of his baseball cap. The purple shade is very rare – which of course makes it very valuable.

This example wasn’t in the best condition – it was graded 6 on a 10 point scale, with 10 being mint. But it was still in decent order, and came in a protective clear plastic case. 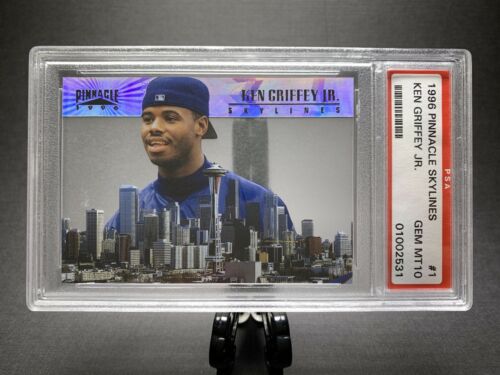 This 1996 baseball card was from Pinnacle’s Skyline series. These featured sports stars paired with a graphic of the skyline of their team’s city.

This card shows Seattle’s distinctive horizon below a head and shoulders shot of Ken Griffey Jr. The text on the back links the iconic status of Seattle’s Space Needle to that of Ken himself.

This was the first card in the Skylines series, which adds extra interest for collectors. It was offered for sale in 2022 in perfect condition – graded 10 by the Professional Sports Authenticator. 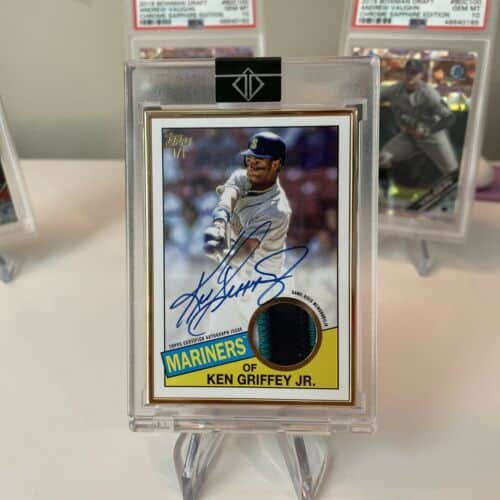 This 2020 baseball card is a serious catch for any collector. It’s the only one of its kind, and it was signed by Ken Griffey Jr himself.

The back of the card explains that the signing took place in the presence of a Topps representative, guaranteeing authenticity.

On the front is a photograph of Ken taking a swing, together with a three-color patch – part of a game-used kit. (Unfortunately, there’s no information on what game it was used in.)

The card came framed and in mint condition. It was offered for sale at $2,350, with the seller accepting a slightly lower offer. 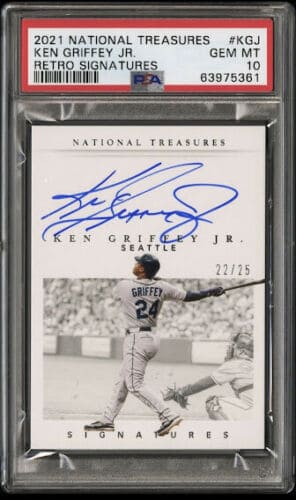 This 2021 baseball card is another that’s valuable, despite being made only recently. That’s because it was printed in a run of only 25 cards. And each one was signed by Ken Griffey Jr.

Different images of Ken in action grace the front and reverse of the card. His signature – written in blue ink in an elegant hand – stretches across the top. And it is in mint condition, graded 10 out of 10 by the Professional Sports Authenticator. 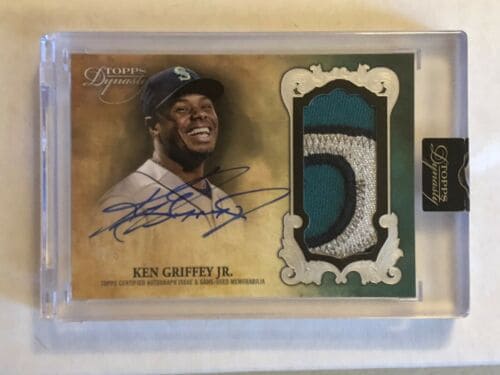 This is the second card from Topps’ 2021 Dynasty series to make our list. But in this case, Ken Griffey Jr doesn’t share the limelight with anyone else.

It’s numbered DAP-KGJ4 and features a great portrait of the man himself laughing. And it’s accompanied by an authentic three-color patch from his kit, plus his autograph.

Only five of these cards were ever produced, and this is number four. It came up for auction online in 2022, attracting multiple bids before selling for $2,247. 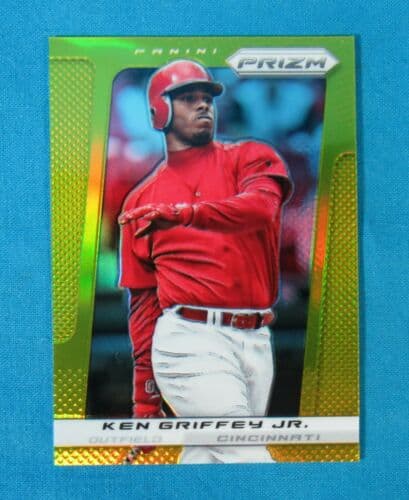 This card, number 183 in Panini’s Prizm series, was released in 2013. It shows a tense looking Ken Griffey Jr in the kit of the Cincinnati Reds.

The card was in perfect condition and came presented in a simple penny sleeve. It came up for auction on an online platform in 2022, and attracted a lot of interest.

By the time the auction finished, it had garnered over 30 bids. The final price paid by one determined bidder was $1,656. 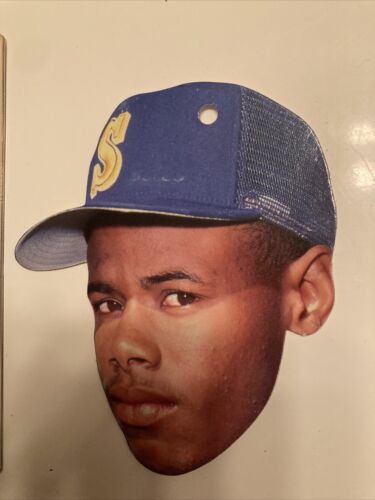 This exceptionally rare baseball card was from the 1989 Heads Up series. This featured the cut-outs of the heads of baseball stars. And this particular card was a test, issued before the main series went to the printers.

It was put up for sale online in 2022. The seller was a former employee of one of the four stores in Montgomery County where the test cards were released.

In addition to being a real rarity, the card was in mint condition, complete with its original wrapper. The asking price? $7,500, but the seller accepted a lower offer. 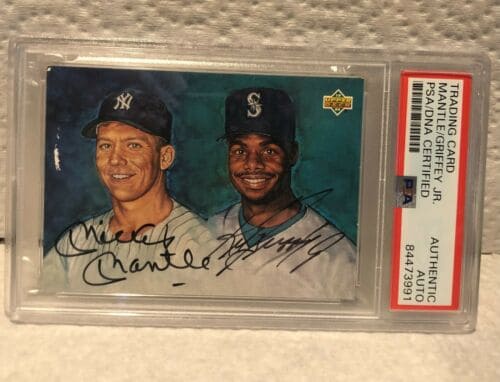 With this 1994 card from Topps, you get two baseball stars for the price of one. It features both Ken Griffey Jr and Micky Mantle. And both sportsmen have signed the card.

The autographs had been authenticated by the Professional Sports Authenticator, so buyers could have confidence they were getting the real deal.

The card itself wasn’t graded, however – perhaps because it was in less than pristine condition. There was a scuff on the front left side where part of the background color was missing.

Nevertheless, the autographs made this an important card for collectors. It was sold via an online auction in 2022 for $8,600. 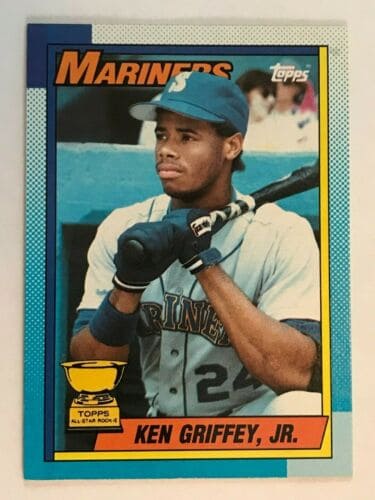 This 1990 card from Topps, numbered 336, shows that baseball can be a tough game! It shows Ken Griffey Jr with his bat over his shoulder – and sporting a scar on his left elbow.

As with many Topps cards, the reverse records key facts from the player’s life and career. And it highlights that he was awarded Baseball Player of the Year twice in four years.

This is a rare card, and Griffey’s scar is an interesting detail that appeals to collectors. This particular example was also in mint condition when it was offered for sale online in 2022.

The original price had been $9,400, but the seller accepted a lower offer. 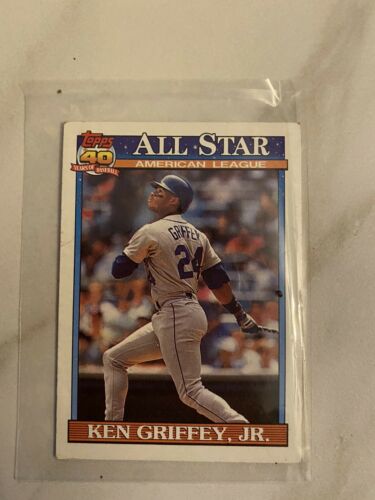 This baseball card by Topps came up for auction on an online platform in 2022. The seller didn’t have much to say about it: the description read simply “Ken Griffey Jr Card Don Russ”.

The card showed signs of age, looking less crisp around the edges than many of those on this list. It hadn’t been professionally graded. It wasn’t even in a rigid plastic case, kept instead in a simple soft-sided pocket.

The front showed Ken Griffey Jr in action at a game. And the reverse carried key details of his life and career, including his complete major and minor league batting record. It also noted that, in 1990, he and his father became the first father-son duo ever to play together as teammates.

The card and its description might have looked humble – but this was a rare item. It sold for a staggering $13,000. 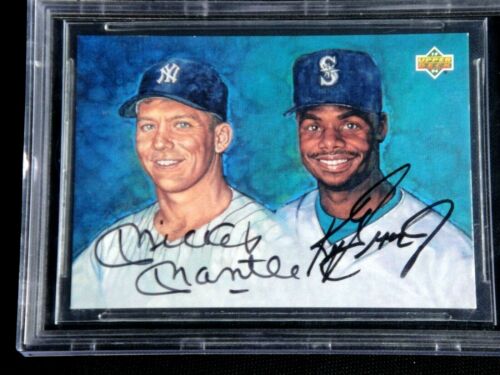 This card is perfect proof of just how important condition is to the prices fetched by collectable baseball cards.

Do you remember that 1994 Upper Deck card we looked at earlier? The one featuring both Ken Griffey Jr and Mickey Mantle, with autographs from both players?

Well, in that case it achieved $8,600 in spite of suffering from an obvious scuff. But this example came to the market in near mint condition. The autographs were graded gem mint too.

So how much of a premium did that add to the price?

Unfortunately, we can’t say for sure. It was offered for sale at $14,900, but the seller accepted a lower offer. We’d be willing to bet it was still north of $14k, though – almost double the price of the card in poorer shape.

That brings us to the end of our look at 15 of the most valuable Ken Griffey Jr baseball cards.

For most modern baseball cards to be really valuable, they need to have something special about them. That could be an authentic signature, a piece of kit – or even both. But some older cards can look quite normal on the surface, while being highly prized by collectors.

And even with the rarest of cards, condition is all-important. A card in mint or near-mint condition could be worth around twice as much as one with bumped corners or scuffed surfaces.

We hope you’ve enjoyed learning more about these cards – and celebrating a true icon of the game.