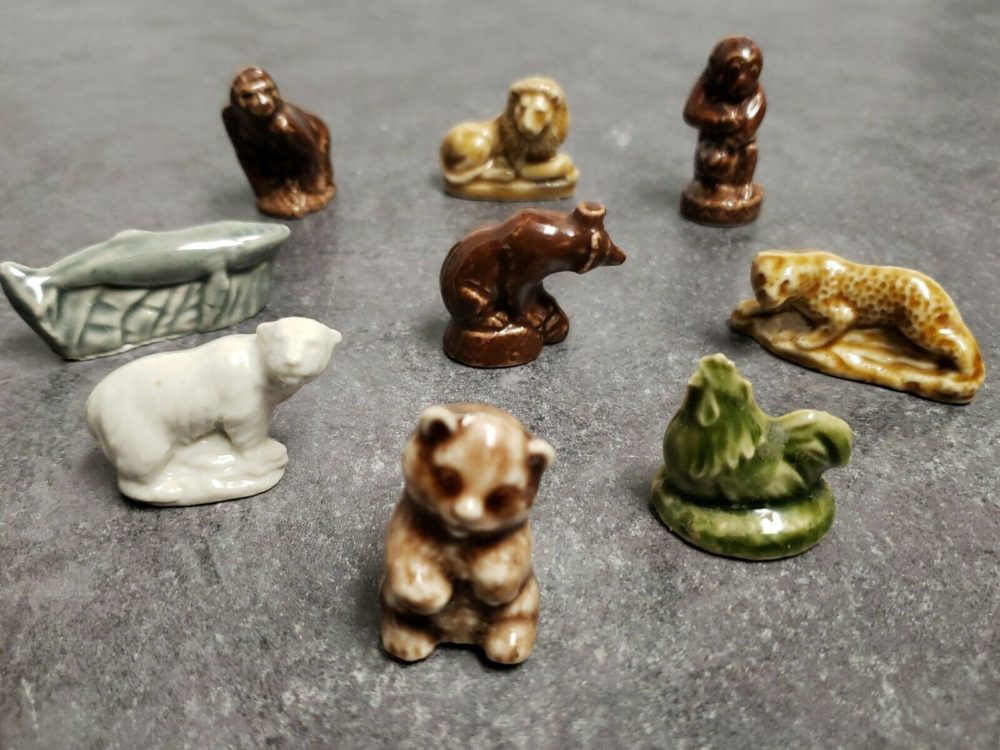 After World War II, lots of countries were feeling the economic pinch. Occupied Japan produced and released a swathe of cheap ceramics, but they weren’t the only ones. Over in England and Ireland, Wade pottery filled the market. They’re listed in two collector’s books.

The books are The World of Wade Volumes 1 and 2 by Ian Warner and Mike Posgay. They’re crucial reference points because today, these Wade Whimsies make treasured collectibles. So let’s check out the most valuable wade figurines, what they’re worth, and where to find them.

Most rare Wade Figurines Worth Money

Because they come in sets, the most valuable Wade figurines aren’t necessarily the oldest. This nautical set only has two animals (starfish and seahorse). The rest of the pieces are boating gear. But since it’s a full set in mint condition plus original baggies, they cost more.

From 1967 to 2018, Wade figurines were given as free gifts when you bought a box of Red Rose iced tea. Because the individual pieces were free, you could make a killing by finding a complete collection like this one. Red Rose whimsies were usually painted in a single color.

3. The Bard of Armagh Wade Figurine

While the most common Wade figurines were free give-aways, some were made to commemorate current events. So when Patrick Donelly wrote a popular Irish ballad called the Bard of Armagh, Wade Ceramics made this colorful figurine based on William Harper.

The old man sits on a brown wooden bench playing his harp. He’s mounted on a thin grey disc and wears a light green coat over grey pants. The stamp under the figurine authenticates it as an Irish Porcelain piece made in Ireland, and it even mentions the name of the model.

Typically, Wade Whimsies sell for a dollar or two. The Red Rose website sells colorful pieces at $5 each. But if you can find figurines made for specific markets (e.g. Canada, the US, England, etc.) you can get better prices because they have identifiable regional features.

As an example, dog figurines aimed at the English market were often two-toned and came in dog baskets. Meanwhile, circus figurines were typically painted in two or three colors. This rare skirted poodle was the only two-tone Wade that you could get as a free Red Rose gift.

Some of the original Noah’s Ark figurines were plain white. One specific set had a dozen pieces in white, green, blue, grey, and brown. If you were a heavy tea drinker, you could collect a figurine featuring Noah and his wife. You might even get the ark itself to display them in!

It could take a lot of boxes and cups to assemble this collection, so you could just buy this complete one instead. The collection has Noah and his wife (green) plus a pair of white sheep, grey elephants, tan lions, blue geese, green chickens, brown rhinos, and the ark.

Nursery Rhyme figurines were made for the Canadian market, and some can fetch up to $100. The Gingerbread Man is a particularly precious find. He was part of a series that included the bears from Goldilocks, the old woman in the shoe, and the grandfather clock.

But since the pricing on this little guy can range from $2 to $200, you’re safer buying a complete collection then auctioning off the individual pieces. In total, the nursery rhyme collection had 24 pieces, and you can get them here. They’re all mixed-color miniatures.

Few people know the value of Wade figurines. You might have tons lying around in your grandma’s things. Chipped ones are often given away for free at garage sales. Get a copy of the World of Wade books so you can identify these treasured finds. You can flip them later.

But when you’re shopping, confirm the series you’re buying. The house figurines were called Whimsy-on-Why and they retain their quality better since they weren’t handled much. But human and animal pieces fetch better prices. Try this complete Calendar Collection instead.

Colour is one way to distinguish free Red Rose Wade figurines from commercial ones. The giveaways were made in a single color with limited textural detail, but you can still sell them for a lot if you have a full set. But this commercial Camelot series was priced higher.

The set of five contains Arthur, Guinevere, Lancelot, Merlin, and the Lady of the Lake. They’re depicted in ceremonial costumes complete with jewelry and weapons. Each one stands or kneels on a rounded base. The stamp underneath verifies this Camelot Collection.

It can be tricky differentiating the animals in various Wade series. But as a primer, circus animals usually have clothes (e.g. a hat, a skirt, etc.) and are painted in two or more colors. These six dinos were part of Dinosaur Set 3 from 2008, and it’s a comprehensive dino family.

It’s hard to confirm all the dinosaur names, but various sellers claim to have a brown ankylosaurus, a grey iguanodon, an orange lambeosaurus, a green allosaurus, and a blue brontosaurus. The figurines are about 2 inches tall in vivid colors and detailed body parts.

Initially, Wade Whimsies were free gifts and it took dedication (and a massive tea habit) to collect them all. But the Red Rose sets were limited to 6 series of one-color pieces plus one series of two-tone circus pieces. But outside the tea set, Wade has a dozen other animal sets.

So if you want a comprehensive collection, get this carefully acquired set of 60. They were lovingly gathered and the chipped ones were replaced with mint condition exhibits. The figurines were commercial, so they all have multiple colors and intricate textural detail.

Snow White is one of the world’s most famous fairy tales. And the Disney version is so popular that it’s taken as canon. So yes, they get a Wade set, although, FYI, the original Brothers Grimm Brothers version – which was called Keeper of Dwarfs – is way darker!

These pieces came out of a private collection and are pristine except for a chink on Bashful Dwarf. The colors remain vibrant and gorgeously glazed. All eight figurines are posed on an individual base of green textured grass and their facial expressions are comically distinct.

Usually, it’s complete collections that fetch high prices. But occasionally, you can find a solo piece that’s worth a lot. That could depend on its design, time period, or subject. This 1936 piece was based on a Charles Dickens character and was particularly prized for its age and style.

In the 1930s, Wade was experimenting with cellulose finishing, and this Dolly Varden piece was made in that style. Over time, this finish yellows, but as far as collectors are concerned, that adds to the authenticity and value of the piece. It measures 24cm by 14cm.

A lot of online buyers invest in Wade figurines for speculation. So if that’s your strategy, pop culture pieces are a safe niche. That included pieces like this Betty Boop England World Cup figurine. It features Betty draped in the flag of England and wearing the English footie kit.

The red-and-white national uniform is congruent with Betty’s trademark lily-white skin, red dress, and flirty lipstick. She has her foot on a soccer ball and is standing on a bright green pedestal pitch. The piece isn’t worth much now, but only 750 were made so hold on to it!

If Betty Boop’s curves aren’t to your taste, you might be more interested in the Men of Michelin. This is a relatively recent set of Wade figurines and comes as a set of four. FYI, Bibendum is the official name of the Michelin (Tire) Man – he’s made of white stacked tires.

In this set, he’s variously dressed as a Native American, Sailor, Santa, and Cowboy. Only 750 sets were made so the price is already sneaking upward. And all four white dudes are dressed in vivid colors and posed on a white disc-shaped pedestal branded with the Michelin logo.

If you’re buying a limited edition collectible, find out whether the seller has the certificate of authenticity. (Above, Betty and the Bibendums all have them.) Without that document, you can also verify your pieces if they come in their original box and/or as a complete set.

This Farmyard Animals kit is quite treasured. This full set of five comes in its box and contains the swan, Italian goat, shire horse, piglet, and foxhound. The series was first released in 1959, and if you get a set without the box, the value goes down as much as $100.

Disney is a popular subject for Wade figurines. It’s a successful partnership because the characters are so beloved and are instantly recognizable. This particular figurine features one of Pluto and Fifi’s five pups. The plucky quintuplets are quite popular among Disney fans.

The puppy is 100mm tall and 62mm wide. It’s a rich orange-ish brown tone with raised eyebrows and an expressive face. But the figurine does have a few visible ‘factory flaws’ including air bubbles and color smudges. Luckily, they don’t detract from the buying price.

Wade Whimsy-on-the-Why houses are among the most valuable Wade pieces, especially if you get a whole set. But they’re more niche than figurines, so you’re better off investing in human or animal statuettes. Try this complete wildlife set from 1958 (no box) as an example.

The set contains a bear on its hind legs, a bear cub, possibly under the protection of the standing bear, a fox, an owl, and a raccoon. They seem to be in decent condition, but since they don’t come in a box or carry certification, you should ask for more photos to be sure.

The World of Wade books (volumes 1 and 2) have a comprehensive reference list of all the Wades made in the UK. But Ian Warner wrote a companion book of Irish Wades, and you can find some treasures in there too. This Crooked Irish Paddy is one such discovery.

He’s an old man bent over his walking stick. And just like the Bard of Armagh, his features were based on a model named William Harper. He’s about 5 inches tall and his underside is marked with all his authenticating details. He seems to be carrying a bowl of plums.

Wade made several sets of dinosaurs. And it can be tough to verify their exact names, colors, and species. You might see the same figurine given different names on different sites – and some of those names are made up! So you’re safer buying this complete set.

It has 14 individual dinosaurs pre-packed in a labeled display box, so it’s worth the shipping! Each of the reptiles is carefully colored and rendered with extra detail on their horns, scales, and claws. This collection compiles pristine dinosaur pieces from sets #1, #2, and #3.

Do you have a favorite Wade whimsy figurine? Tell us how you found it and share photos!

1 thought on “19 Most Valuable Wade Figurines Worth Money”