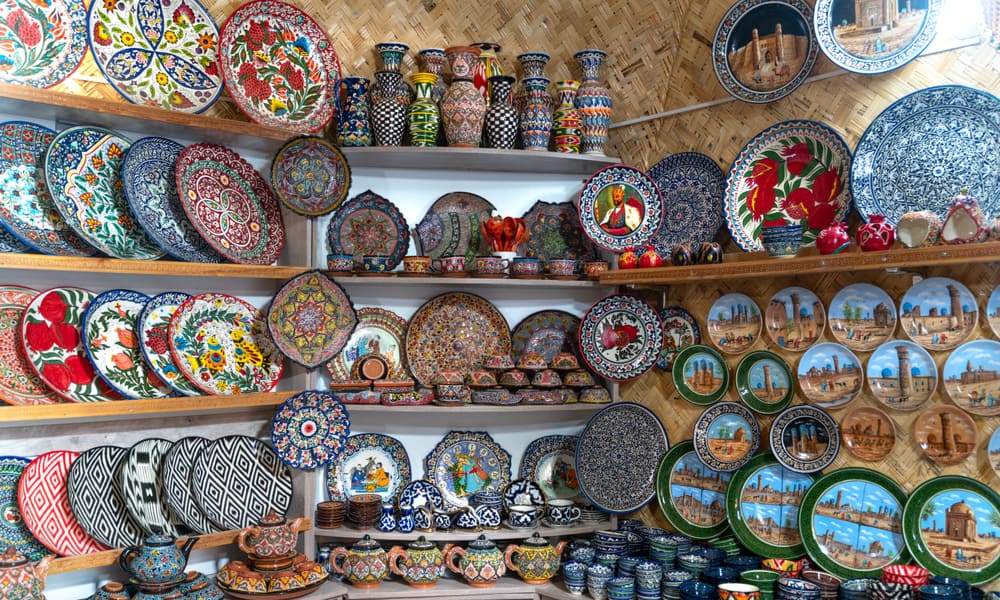 In the world of antiques, value can depend on any number of factors. And that’s just as true when it comes to antique dishes.

The material from which they’re made, the maker and the age can all made a difference to the price. And in almost all cases, condition is key. Any scratches to silver, or cracks or chips to porcelain, can put a huge dent in the value too.

We’ve searched out some of the most valuable antique dishes ever sold to see those principles in action. So if you’re ready to find out just how much the best of the best can sell for – step this way!

Most Valuable Antique Dishes Worth Money 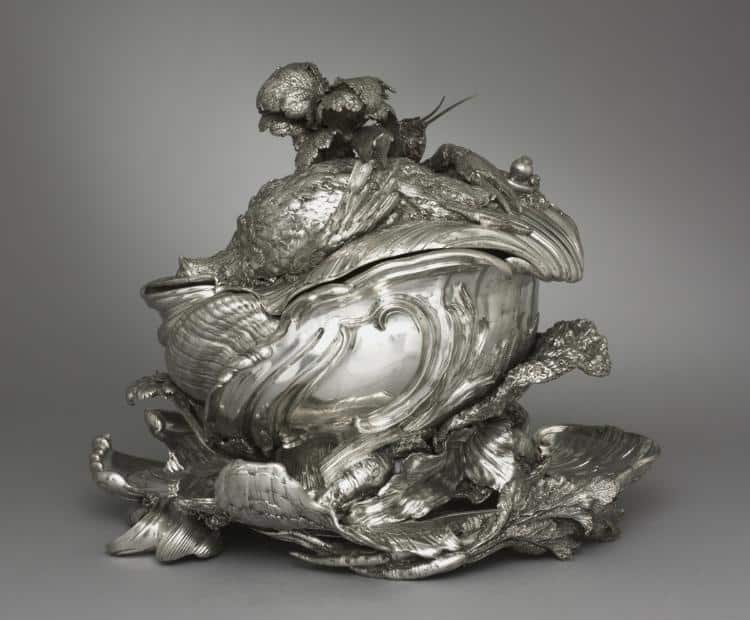 If you’re looking for a silver tureen to grace your table, this is the mother of all examples. It’s made in solid silver and was crafted by the 17th century goldsmith and sculptor Juste-Aurèle Meissonnier.

Meissonnier was Italian but worked mainly in Paris. This tureen is an excellent example of his work, and features the ornate decoration for which he’s renowned. It dates from between 1735 and 1740 and was made for nobility – the second Duke of Kingston, to be precise.

It came up for sale at auction house Sotheby’s in 1998 and realized a hammer price of $5.2 million. That was actually something of a disappointment – it had been estimated at between $8 and $12 million. Perhaps the fact that the lot did not appear in the auction catalogue held it back. 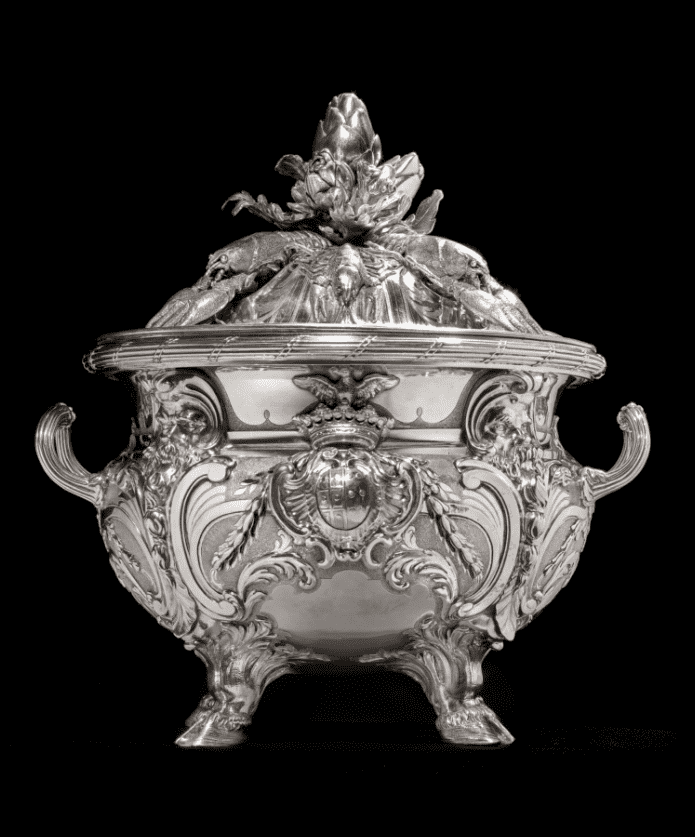 The Thyssen Meissonnier tureen is undeniably impressive – but it’s not the most valuable silver soup tureen ever sold. That honor goes to a tureen made by Thomas Germain, another 17th century goldsmith and sculptor.

Germain began his working life in Rome. But he spent the majority of his career working for the French King, Louis XV. And this tureen was once part of the French royal household’s collection.

That connection gave it added cachet to collectors. And it was also a rare survivor – much of Louis’ silver was melted down in 1759 to finance his armies for the Seven Years War and French Revolution.

Images of the tureen are impossible to find online – the pictured example is another tureen by Germain. We know, though, that this one was somewhat smaller than the Thyssen Meissonier tureen, weighing 30 pounds.

But when it came up for auction at Sotheby’s in 1996, it sold for an astonishing $10.2 million. That was a record-breaking price for any piece of silver. And it’s a record that stands to this day. 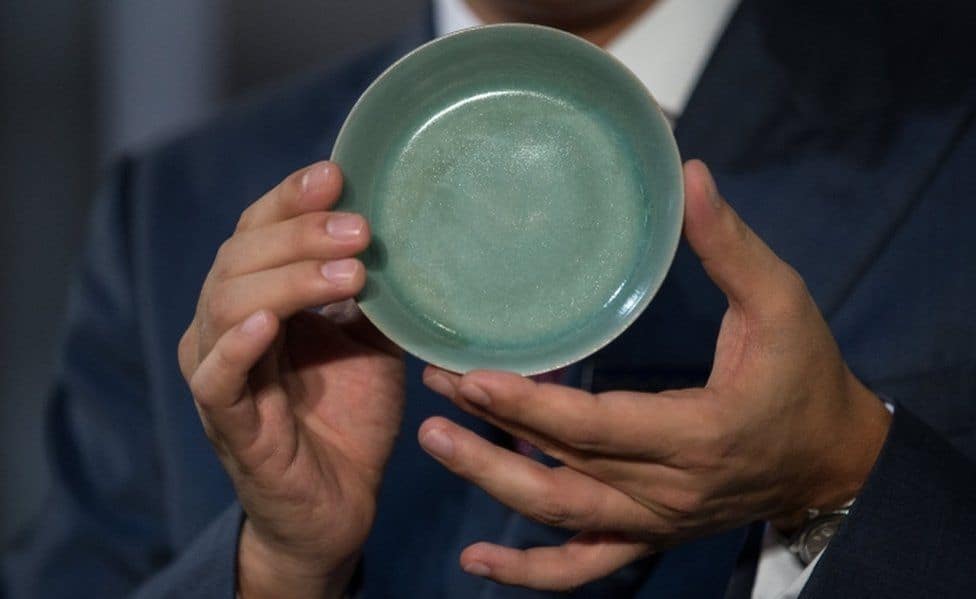 So you might be surprised to learn that it sold for almost four times as much as the Germain silver tureen. So what made it so valuable?

Well, it’s a type of early Chinese porcelain known as Ru-ware, and it’s extremely rare. It was produced for a brief period during the Song dynasty, a thousand years ago. Pieces were reserved for the imperial court, and fewer than a hundred are known to survive.

At the time of the Sotheby’s sale, only four heirloom items were known to exist in private collections. The chance to own this little bowl – probably used for washing brushes – was irresistible to collectors of Chinese porcelain.

Bidding was intense. And when the auctioneer’s hammer fell in Hong Kong in 2017, the final price was an eye-watering $37.7 million. 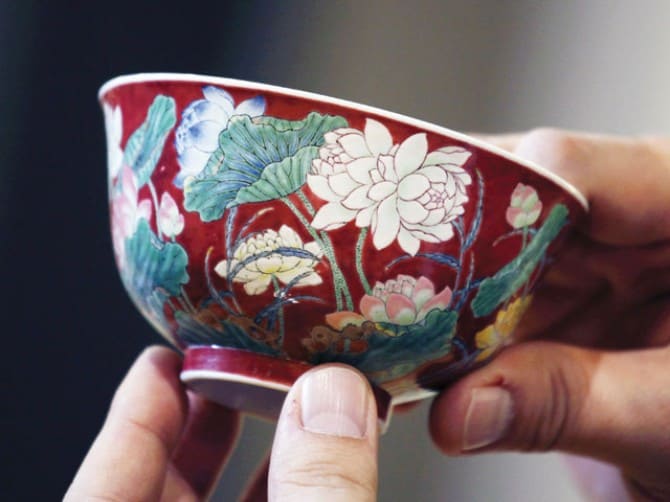 This pretty red bowl is another example of the high prices fetched by rare Chinese porcelain. It dates from around 1722, in the Kangxi period of the Qing dynasty.

It’s decorated with a type of enamel known as “falangcai”, which translates as “foreign colors”. This was made in the imperial workshops of the Forbidden City. And it incorporated some enamels from the West, making it very expensive.

It was reserved exclusively for the emperor and his court. And this, together with its rarity, and striking designs and colors, make falangcai wares highly collectable.

This bowl, featuring a pattern of lotus flowers, was offered for sale in November 2019. After competitive bidding, it was sold to a Hong Kong ceramics dealer for $9.5 million. When it comes to Chinese porcelain, most of us have heard of the prized wares of the Ming dynasty. And this lovely blue and white bowl shows just how valuable they can be.

It dates from the 15th century, early in the Ming period. It is decorated with a large central motif of a dragon, an auspicious creature in Chinese mythology.

In the event, that estimate proved to be some way off target. When the hammer fell, the winning bid was 35.5 million krone or $5.1million.

Glass dishes can be very valuable too – especially when they’re as ancient and rare as this one.

What appears to be a small dish is actually believed to have once been part of a lamp. And it dates from the Roman era, around 300 AD.

That a piece of fragile glassware has survived intact for almost 2,000 years is something of a miracle. And it’s even more astonishing when you look at the bowl itself. Not only are the sides intact, so too is a delicate filigree cage surrounding it. Both bowl and cage are made from a single piece of glass. 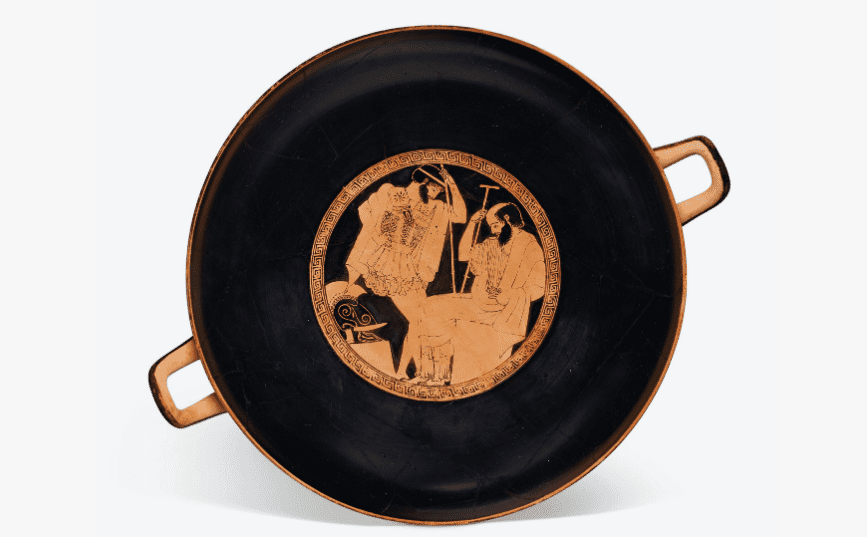 This lovely dish is what’s known as a kylix, an ancient Greek vessel with a tall stem and a shallow bowl. It was used for drinking wine, and this one dates from between 490 and 480 BC.

Despite being around 2,500 years old, a surprising amount is known about it. It’s believed to have been painted by the Greek painter Makron. And it was crafted by another Greek named Hieron, a potter who signed many of his pieces, including this one.

Makron is renowned among collectors of Greek antiquities as one of the finest painters of his generation. Very few examples of his work exist outside major public museums. And this kylix was considered to be one of the finest ever found.

It was sold by auctioneers Christies in October 2020, and made $1.83 million. 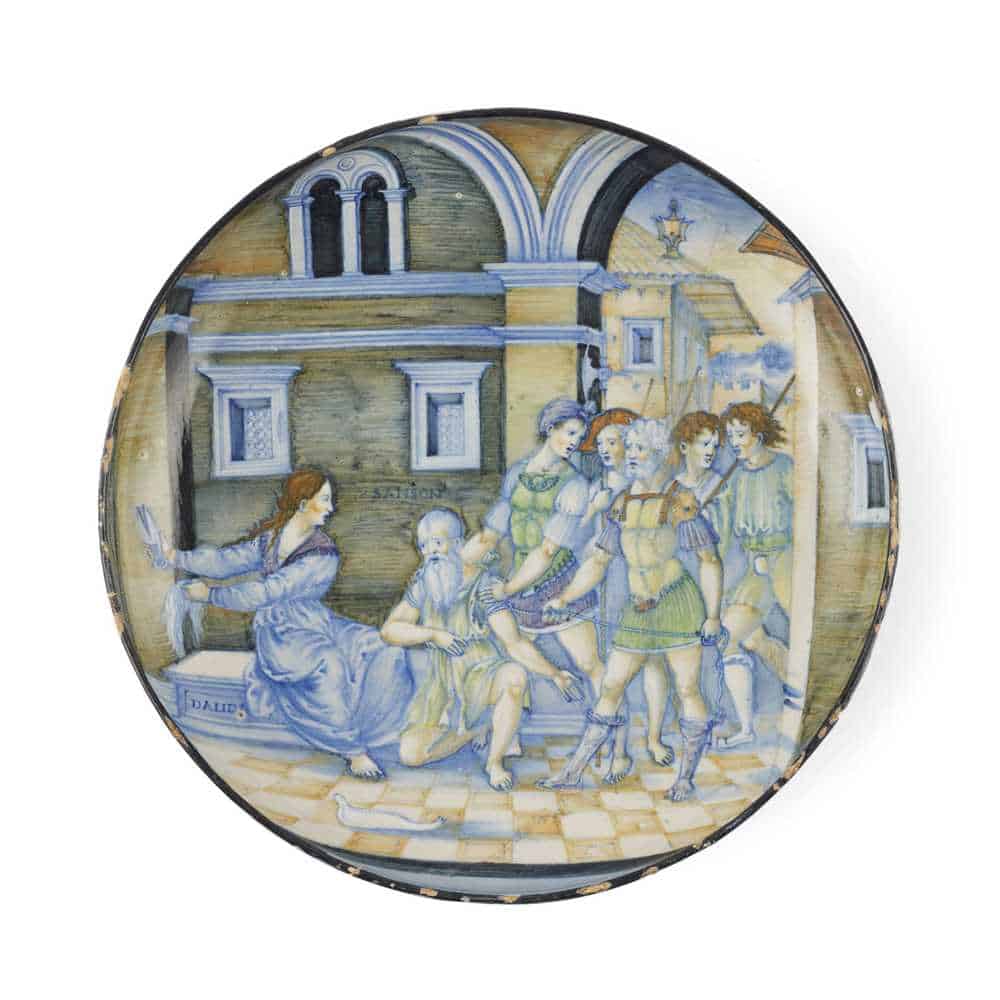 This dish is a superb example of a style known as Istoriato Maiolica. This is tin-glazed earthenware – maiolica – decorated with stories.

In this case, the dish depicts the story of Samson and Delilah. Here, the treacherous Delilah holds the locks of hair she has just cut from the head of the kneeling Samson.

The painting is attributed to Nicola di Gabriele Sbraghe, known as the “Raphael of maoilica painting”. And it is a rare early work, dating to between 1520 and 1523. That made it particularly interesting and desirable to collectors. 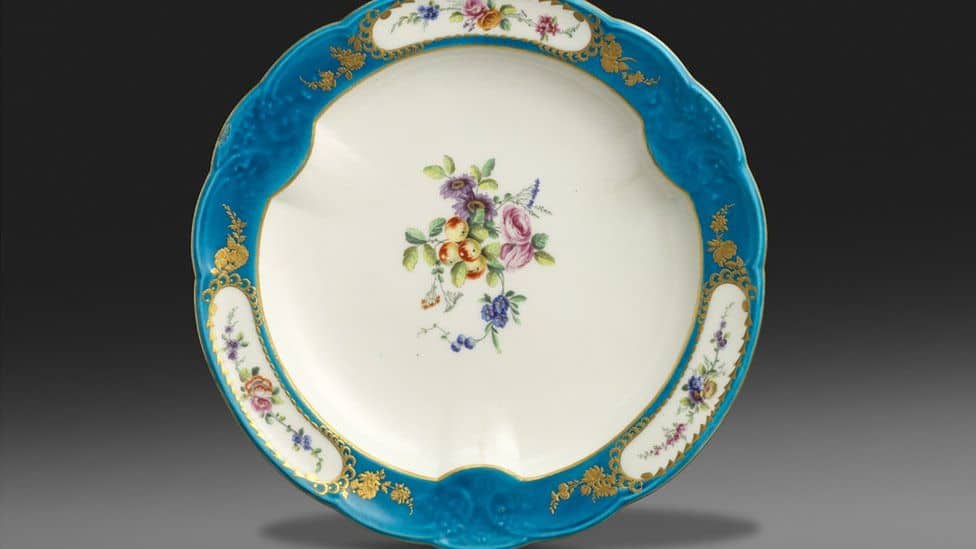 Just like the silver tureen we saw earlier, this dish was made for the court of the French king Louis XV. This version, however, was made of porcelain. And it was part of a dinner service delivered to the Palace of Versailles in 1754.

It’s elegantly painted with an azure blue border with gilt embellishment on a white ground. The central motif is a pretty bunch of flowers, and more flowers appear in cartouches around the border. 28 of the dishes were originally made for the Versailles dinner service.

This one had been in the family of the seller for many years, and they’d had no idea of its value. Indeed, as an attractive decorative item, it had been hung on a wall.

So it was something of a surprise when they saw an identical plate sell at auction in 2020 for $34,000. And that one had been broken and repaired with rivets.

Spurred into action, they put their own plate into auction a few months later. In perfect condition, and perhaps helped by publicity from the earlier sale, it made an astonishing $120,000. 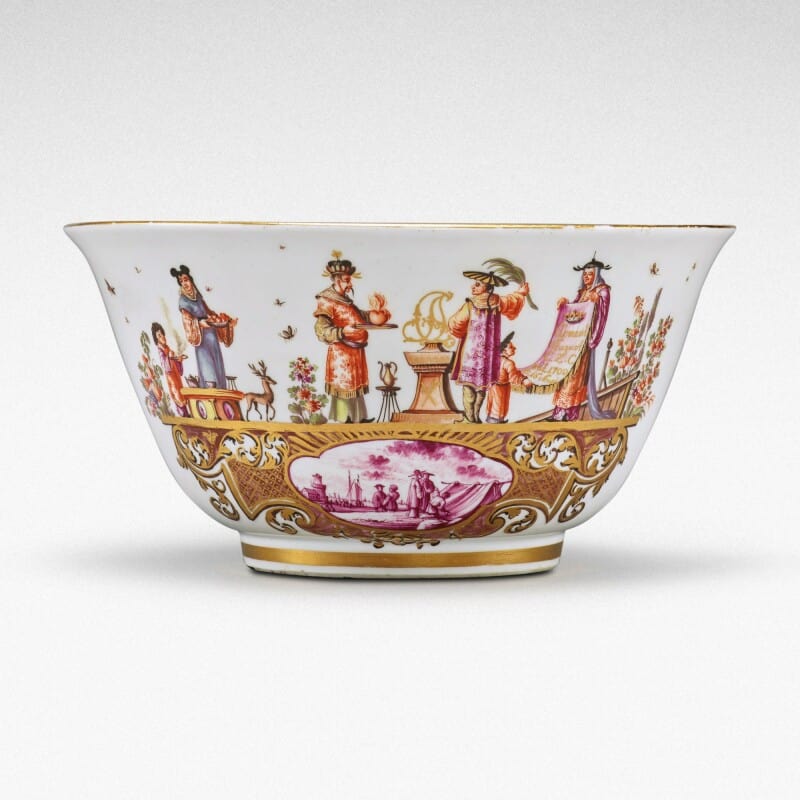 Something called a “waste bowl” doesn’t sound particularly desirable. But this beautiful example by famed German porcelain firm Meissen would grace any table.

Waste bowls were used in 18th century polite society to hold the dregs of teacups. This allowed the cups to be refilled without affecting the quality of the tea.

This dish was part of a chocolate, coffee and tea service made in 1735 for Clemens August of Bavaria. Clemens was a son of Max Emmanuel II, the ruler of Bavaria. And as Archbishop and Elector of Cologne, he was also an important person in his own right.

The service was one of the most elaborately decorated ever made by Meissen, and incorporated Clemens’ initials in the design. The waste bowl was one of several items from that service sold at auction in New York in September 2021. 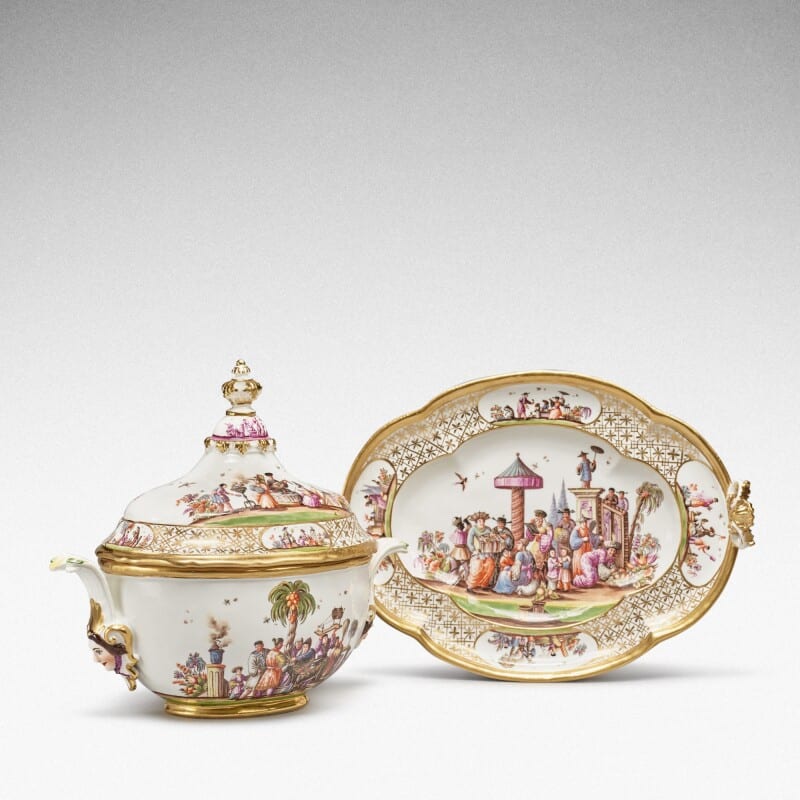 This porcelain tureen and stand was sold at the same 2021 auction as the Meissen armorial waste bowl. It too was made by Meissen, but although still richly decorated, the pattern was less elaborate.

It dated to between 1730 and 1735. The scene depicted on the tureen and stand showed Chinese figures at work and play in a garden. It was a treat for the eyes, with bright colors and lots of gilt embellishment.

It was in exquisite condition too. And when it came under the auctioneer’s hammer, it sold for $163,800. 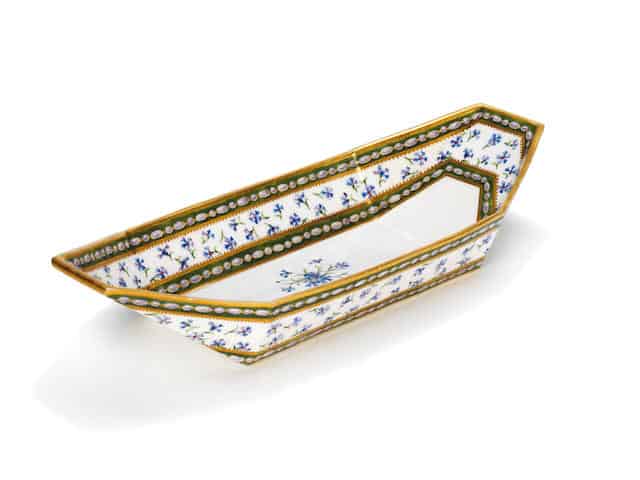 Another of European porcelain’s most renowned names is Sèvres. The French company began making porcelain in 1756 and continues to do so to this day.

This elegant boat-shaped dish is a relatively early example of their wares. It dates to around 1781, and it’s another piece with a royal connection. It was made for Marie Antoinette as part of a large dinner service. But the whole service contained only two such dishes.

It’s a lovely thing, just under 11 inches long, and decorated with a spray of blue cornflowers in the center. This is surrounded by a border featuring more cornflowers and a gilt rim.

It was not, however, in perfect shape when it came up for sale at Bonhams in May 2011. There was a chip in the rim which had been repaired at some time in the past.

That doubtless affected the value significantly – porcelain collectors are keen to find pieces in pristine condition. But it nevertheless fetched an impressive hammer price of $18,000.

Dish of the Day

That brings us to the end of our look at some of the most valuable antique dishes ever sold.

Age and history often attract collectors. Connections to nobility, and especially to royalty, can push up prices significantly.

Scarcity is often more important than ornate decoration. The most expensive dish on our list is also the simplest in appearance. The Ru-ware bowl that sold for $38 million has been likened by some to a cereal bowl! But its extreme rarity was what had collectors fighting to secure it.

In some cases, the value of the raw materials can also affect the price. The beautiful tureens by Germain and Meissonnier combine exquisite craftsmanship with between 30 and 40 pounds of silver.

And condition is always important. Who knows how much that charming boat-shaped Sèvres dish would have made, had it not been for that chip in its rim?

So if you have your own valuable antique dish, handle it with care. And maybe think twice before displaying it on your wall!