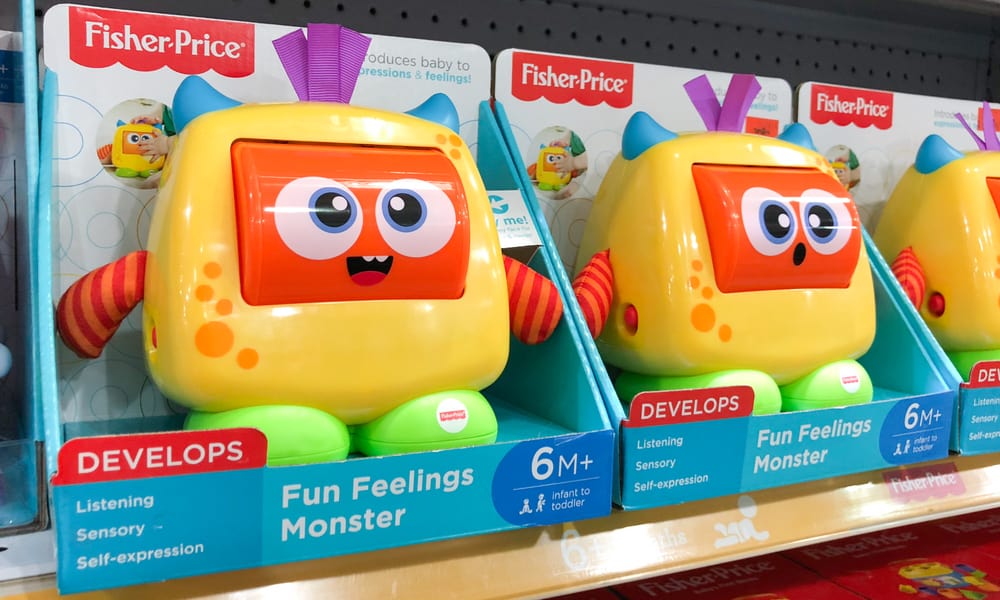 For generations of children, Fisher-Price toys provided hours of entertainment. With their bright colors, solid construction and fun factor, they were firm favorites in every toy box.

Today, the brand is owned by Mattel. But you can still find vintage Fisher-Price toys at flea markets, online, and through specialist toy dealers. And some models can be worth a lot of money.

We’re going to take a look at some of the rare vintage Fisher-Price toys that are most highly prized by collectors. And we’ll discover just how much they’re worth today. 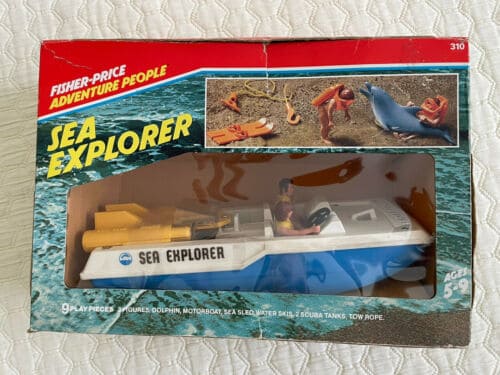 Fisher-Price launched its Adventure People range in 1975 and production continued for nine years. The Sea Explorer set was the eighth in the series, launched in 1976.

It has nine separate pieces, including a sea sled and motorboat for young explorers to traverse the waves.

Production ran for four years, and the set stayed almost completely consistent throughout the period. The one variant relates to the dolphin it contains. That’s usually blue with a white belly, but some all-blue examples have been found too.

A set from 1979, in perfect condition with the box still sealed, recently came up for sale on an online auction platform. It included the more typical dolphin with a white belly. And it attracted plenty of interest from collectors, with a winning bid of $257. 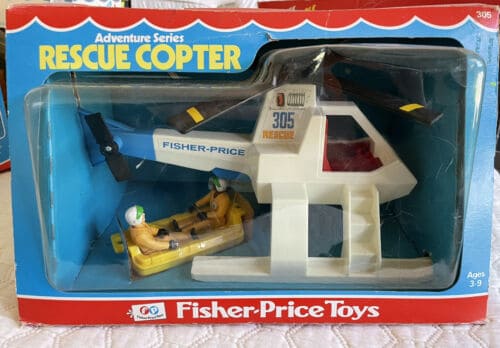 Fisher-Price produced four different sets for the launch of their Adventure People range. This one, #305, was one of those four.

All the sets included at least one figure with arms and legs that could move. And this one included two – pilots called Roger and Jess. Roger was black and Jess white, and both were male.

There are a couple of variations between different sets. In some, Roger wears a top with long sleeves and black gloves. In others, he has short sleeves and no gloves. Jess has the same variations, and the models appear in different combinations in the sets.

A set still in its original box recently came up for sale on an auction website. It attracted 12 bids, selling for $256. 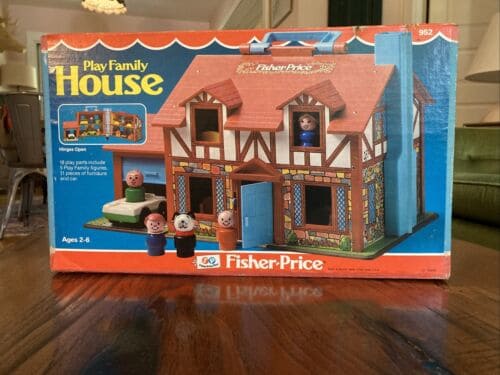 The Play Family House was the second in Fisher-Price’s series of Little People play sets. It was designed so that children could carry it around, then set it up and play.

It continued in production from 1969 to 1988, making it one of the longest running playsets in Fisher-Price history. To begin with, the house was blue and yellow. But in 1980, the color scheme was updated to brown and white.

Early versions included a cardboard moving van. But its flimsy construction meant it was soon withdrawn. As a result, it’s very rare – and collectors will pay over $500 to get their hands on one.

Even later versions of the set, though, can still make good money. A 1980s version, complete and in its original, unopened box, sold at auction online in 2022 for $320. 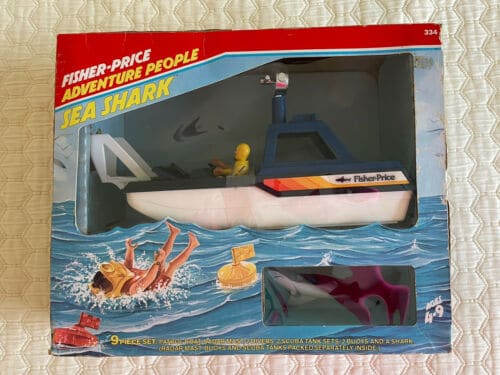 The Sea Shark Adventure People set was made between 1981 and 1984. It was designed for children from 4 to 9 years old.

It featured two action figures, a large patrol boat, and plenty of accessories for kids to have fun with. These included floating buoys, scuba tanks, and even a rubber shark.

The design varied slightly over the three years of production. There were different colors on the boat and a different shaped mast.

An example in excellent condition, still in a pristine box, sold online in 2022. There was plenty of competition at the auction, with 17 bids received. The set eventually achieved a price of $252. 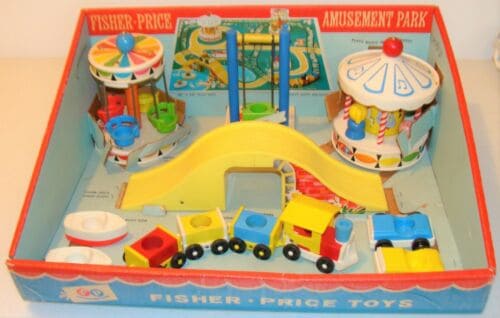 The Amusement Park, model #932, was the first set to introduce Fisher-Price’s straight-sided Little People figures. And it was also the first Little People set not to be based around a pull-along toy.

It was made between 1963 and 1965. The quality of its construction was such that many of the constituent parts would go on to be used in other playsets. And some, like the ferris wheel and merry-go-round, were developed into new models in their own rights.

Today, it’s considered one of the most valuable of all the Fisher-Price sets. A set in its original box was auctioned online in 2022. It carried signs of being loved and played with, and a few pieces were missing – a dog and two figures.

But even incomplete, it sold for just under $300. 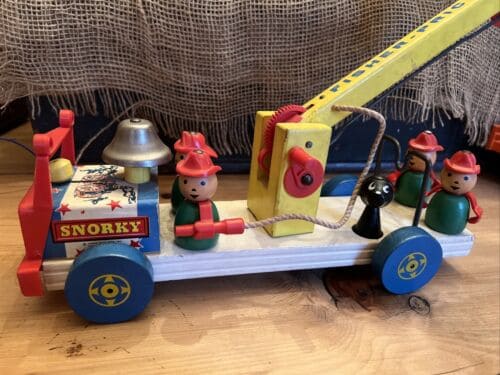 The Snorky Fire Engine was one of Fisher-Price’s earliest Little People sets. The model #168 was made for only a year before being replaced by the #169.

The Little People in both sets bear hardly any resemblance to their later incarnations. And the fire engine was wholly redesigned for the far more successful #720 Play Family version.

But the figures’ unusual appearance and the sets’ short production runs mean they’re highly prized by collectors. Alongside the #932 Amusement Park, they fetch some of the biggest prices of any Fisher-Price playset.

A model #168 sold online in 2022. It was in decent condition, with all the pieces present and correct. But there was some loss of paint to the engine, and the box was long gone. It was nevertheless snapped up by a collector for a fixed price of $295. 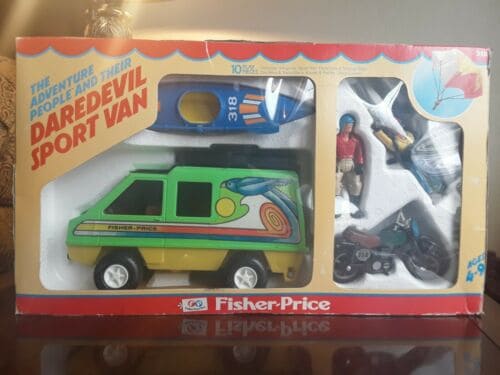 The Daredevil Sport Van was another playset in the Adventure People series. It was made between 1978 and 1982 and featured a California-style van, motorcycle, kayak and parachute.

It also came with two action figures, both white and male. Bill wore a red helmet and teal sunglasses. And Dean wore a blue helmet with silver sunglasses.

There are a couple of variations between sets. The motorcycle appears in different color combinations. And while the kayak paddle is usually blue, there are some orange versions too.

A version with the standard color motorcycle and paddle came up for sale online in 2022. The set was complete, and in its original box, which was also in good condition. It sold for $300. 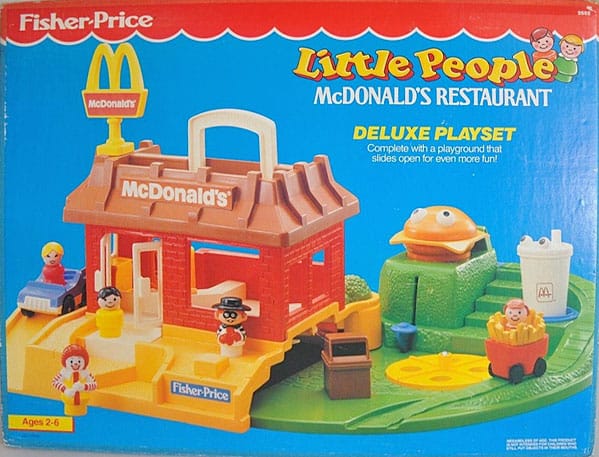 Fisher-Price resisted the urge to introduced branded items into its range for many years. But with competitors Hasbro and Playskool selling vast quantities, in 1990 they caved in. The result was the McDonald’s Restaurant set, #2552.

Sadly, it wasn’t particularly successful, and was produced for only a single year. But it did include some accessories that are prized by collectors today – the Hamburgler and Ronald McDonald figures, and a wheeled fry-cart.

The short production run also makes it fairly rare. One set, complete and in its original box, was presented for auction online in 2022. It attracted just one bid, but that collector was prepared to pay $350 to take it home. 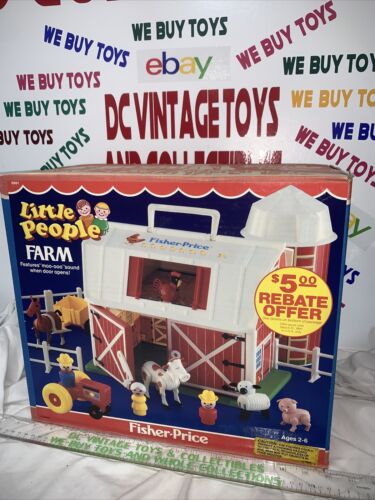 The original Play Family Farm set was one of Fisher-Price’s most successful toys, with production running from 1968 to 1988. But in 1989 it was updated with a new edition, the model #2501. This featured an updated design for the barn, silo and hay loft.

It came with a host of accessories, including four Little People figures and seven farmyard animals.  And the barn door opened to the sound of a mooing cow!

One of the sets came up for sale online in 2022. It was in its original box, which was in great condition, with just minor shelf-wear at the edges and corners. And the contents had apparently never been removed.

One buyer was prepared to spend $400 to add it to their collection. 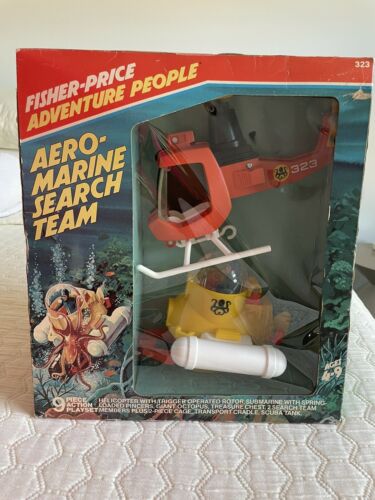 The Aero Machine Search Team was another set in the Adventure People series. It was designed to be suitable for pre-school kids and older children up to about 9 years old.

It included an orange helicopter with two seats and a single seater submarine. Accessories included a hanging hook for the helicopter, scuba tanks and a treasure chest. There were two action figures, a pilot and a scuba diver. And the set was completed with an orange octopus!

A set in excellent condition, complete with its original box, was offered for sale online in 2022. The box had particularly beautiful retro artwork, making it a great display piece.

There was fierce competition at the auction, which attracted 20 bids. The set finally sold for $401. 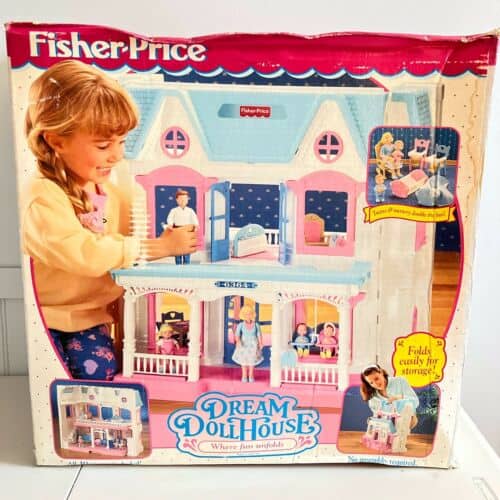 The doll houses produced by Fisher-Price in 1993 were the first the company had manufactured for some years. And they were quite different to earlier versions, because no assembly was required. For parents, then, the “Dream Doll House” certainly lived up to its name!

It was produced in pretty pastel shades. And it came with lots of furniture and three figures – a mother, father and baby.

The set was expanded in 1995 to include babies of both sexes, plus a little girl. Cradles and highchairs were added too, while the rocking couch and bathroom accessories in earlier sets no longer featured. 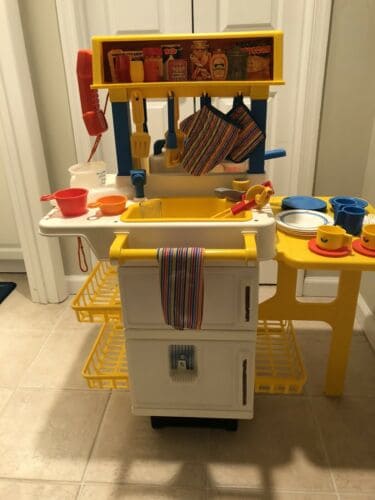 The Fun With Food range was designed to help children identify different foods. The Kitchen Base, model number #2101, was made between 1987 and 1990. And it provided lots of scope for imaginative play in a make-believe kitchen.

Once assembled, children could play with a stove, refrigerator, freezer, sink and toaster. There was also a clock, chalkboard and even an ice dispenser.

In 2020, a version with tons of additional accessories was offered for sale. The extras included pot holders and matching dish towel, a rolling pin and spatula, and make-believe food like waffles, bread and vegetables. There was even a whistling kettle! 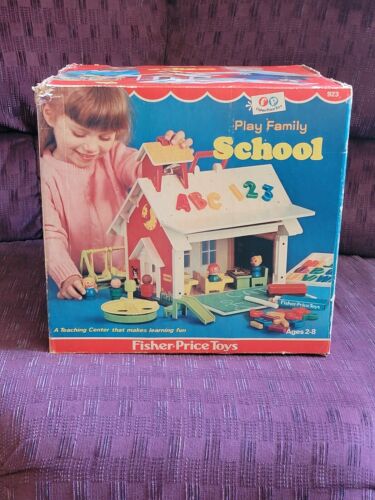 The #923 School was part of Fisher-Price’s Play Family range, produced between 1971 and 1978. It followed three other sets that were a big hit with kids – the Farm, Garage and House.

The School was every bit as high quality as those other sets. And because it was made for seven years, there are a fair number of decent examples still available. So while it’s not as rare as other items on our list, it’s still a great item for those starting their collections.

A complete, early set can still be worth a lot of money. One was sold on an online auction platform in 2022, featuring the first edition of the box. (This showed a little girl with dark blonde hair. The second edition showed the same girl with brown hair.)

The box had never been opened, and the set sold for $500. 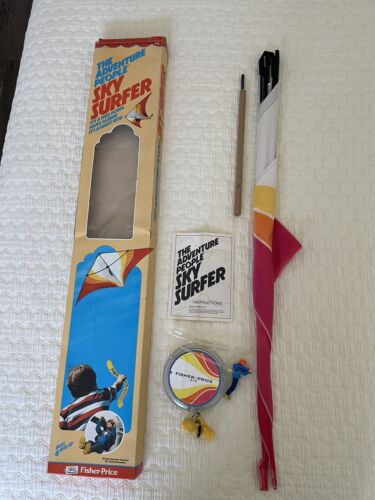 Fisher-Price produced the Sky Surfer in 1978, as part of its Adventure People range. It was supposed to act as a hang glider for an Adventure People action figure. But unfortunately, it never worked very well.

As a result, it was recalled from the market soon after it was issued. Only a few thousand were ever shipped. And that makes surviving examples rare – and highly prized by collectors.

One Sky Surfer appeared on an online auction site in 2022. It was complete with its original box, and had all its component parts. It was snapped up by one keen collector for $700. 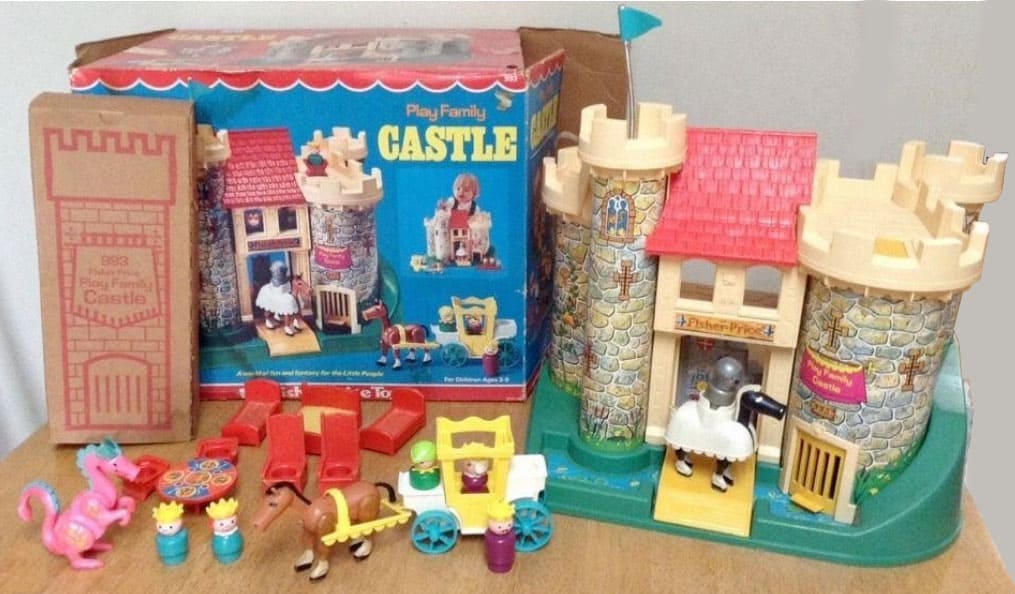 The Play Family Castle, model #993, is consistently a top pick amongst collectors of Fisher-Price toys. It was launched in 1975, and was the largest, heaviest and most detailed of any of the Fisher-Price playsets.

It was made until 1977. But the elements that made it so appealing to kids also meant it was time-consuming and costly to produce.  Trapdoors, a working drawbridge and sliding stairs were great fun, but not as good for the company’s bottom line!

The staircase also had a sharp edge, and the area it slid over was covered with a lithograph. That means that today it’s tough to find examples of the base without scratches.

The Castle was briefly revived in 1988. It had the same model number, but all-plastic rather than wood-plastic figures. And it lacked the spring and flag that had appeared on top of the turret in the 1970s versions.

The Value of Nostalgia

That brings us to the end of our look at rare vintage Fisher-Price toys. We hope you’ve enjoyed learning more about them – and perhaps they’ve brought back some happy memories too!

Early versions in good condition and in their original boxes can be valuable. And some later, and scarce, toys are also desirable to collectors.

But if your Fisher-Price toy has picked up a few bumps and scrapes, who cares? Why not pass it onto another generation and let them enjoy playing with it too!