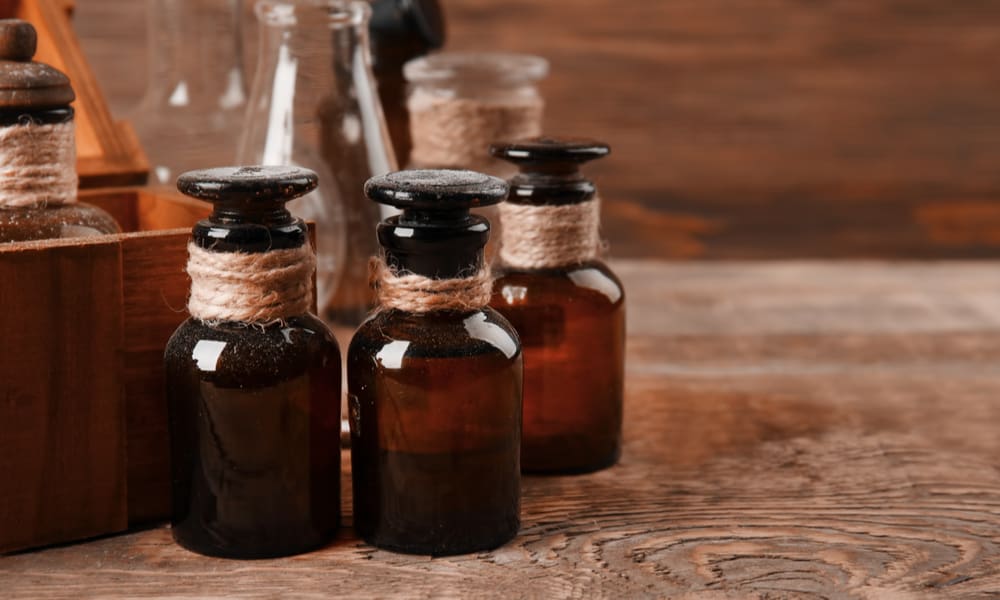 Many people collect charming antique medicine bottles that come in various shapes, sizes, and colors. Most are beautiful, while some can be dangerous. However, one thing is for sure. Once you start this hobby, you will need a lot of space because your options are practically unlimited.

This bottle type produced from the 19th to the mid-20th centuries makes probably the most diverse and sizable bottle group. Since very few medicines were formally patented in those times, you can find hundreds of thousands of produced variations of numerous brands. 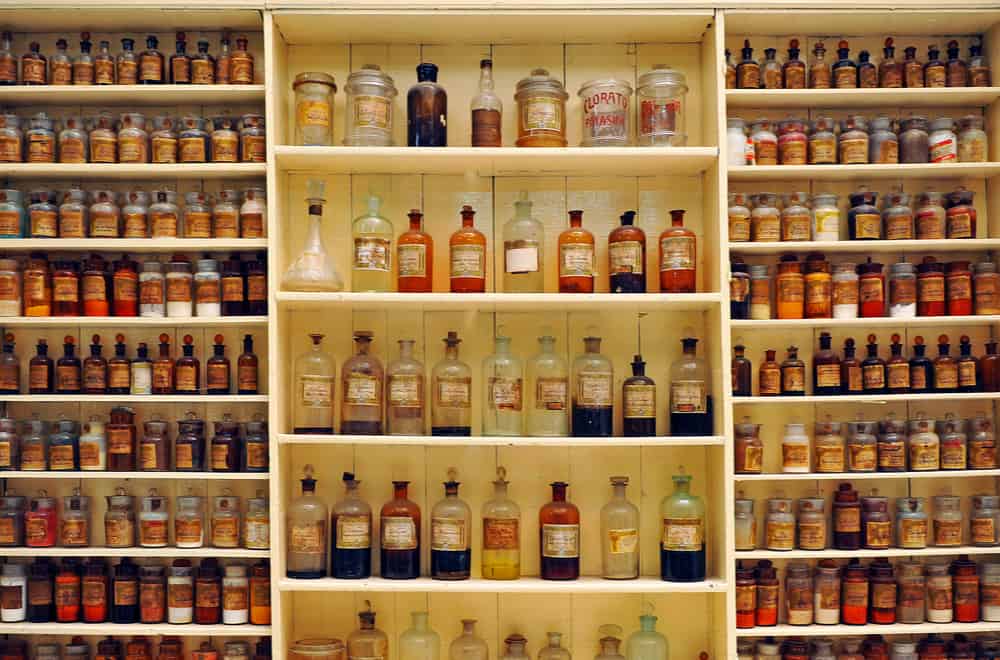 Medicinal bottles are a large and diverse bottle group produced from the 19th to the mid-20th centuries. They originated in medieval Europe. For instance, over 200 serums and cure-all elixirs existed in England during the 18th century, and they needed adequate packaging.

American manufacturers hand-blew glass bottles in the 18th and 19th centuries. Therefore, their form was often irregular, asymmetrical, and sometimes misshapen. As a result, they could hold varying amounts of liquid.

Dr. Thomas William Dyott established the glassworks in Philadelphia to improve American-made medicine bottle quality. His company worked from 1818 to 1838 and produced a high quantity of various vessels.

The earliest models came in opaque aquamarine color, but later experimentation resulted in green, blue, and amber bottles. Historians believe that over 15,000 different medicines were sold in these bottles in the US from 1850 to 1906. 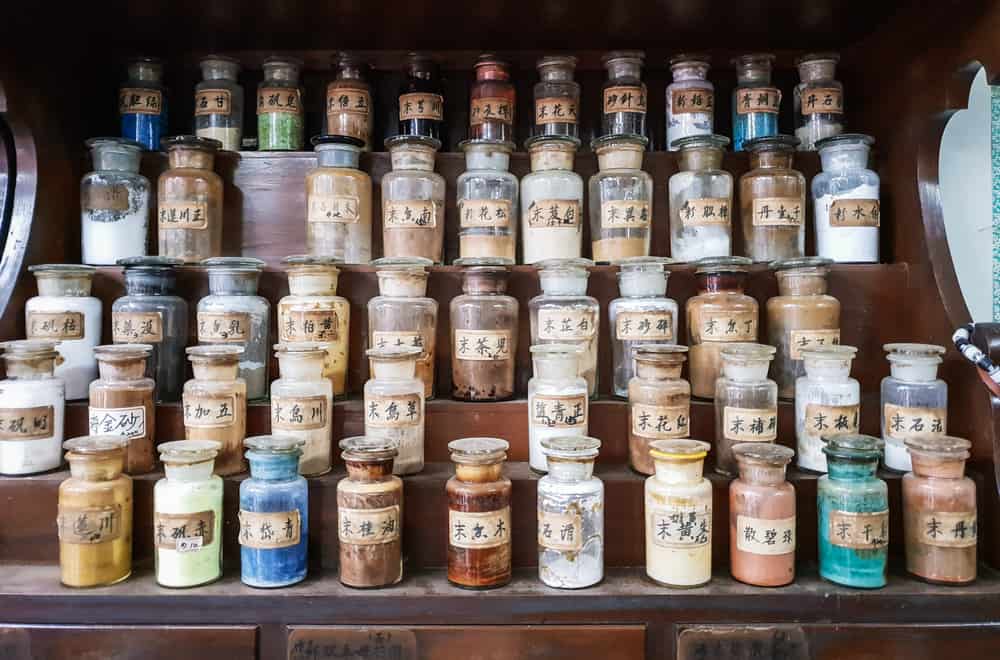 It is possible to recognize various bottle types, but you should be careful since they rarely come with existing labels. The most typical are bottles for:

This medicinal mixture containing natural herbs and high percentages of alcohol was widely used during the 19th and early 20th centuries.

The first products appeared on the market in England during the 18th century. These remedies became popular in the US in the 19th century. The probable reason was high taxation for liquor according to the Revenue Act of 1862.

Since these remedies often contained 39% to 47% alcohol, it is reasonable to believe they were produced to avoid the heavy taxes. By adding plants to alcohol, manufacturers could claim they have medicinal qualities.

The bitters and tonic bottle shape variety was virtually unlimited, and you need to use manufacturing-based features for dating them. For instance, famous square black-glassed Hostetter’s Bitters were bottled from the late 1850s to the 1920s.

You can often find embossed plantation bitter bottles in excellent condition on historic sites since most were kept as decorative items. The production period for pieces in aqua, green, olive, and amber colors is dated from the late 1830s to the mid-1880s. 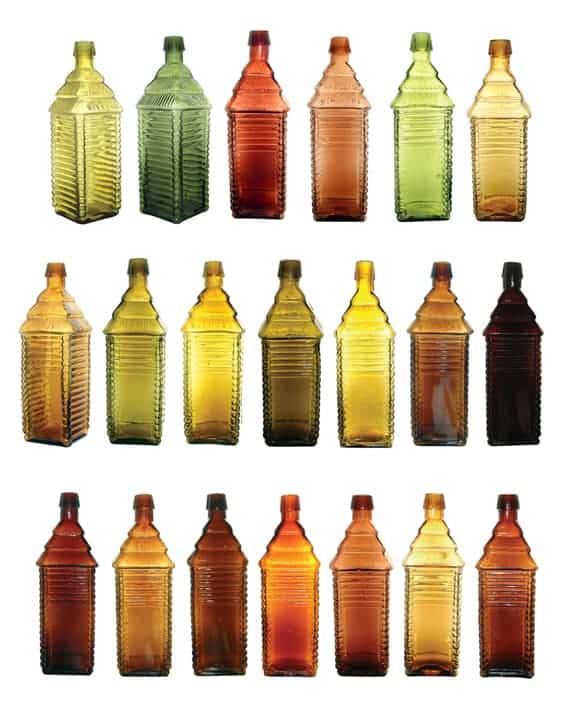 Boker bitters (ladies’ legs) were American olive green bottles with a long neck, sometimes longer than the body and shoulder together. 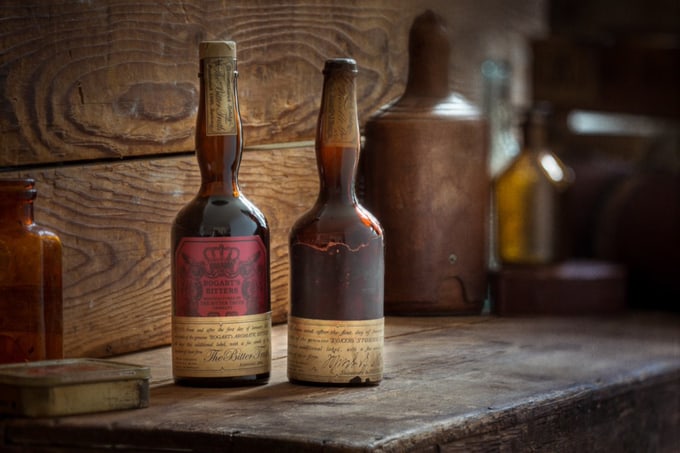 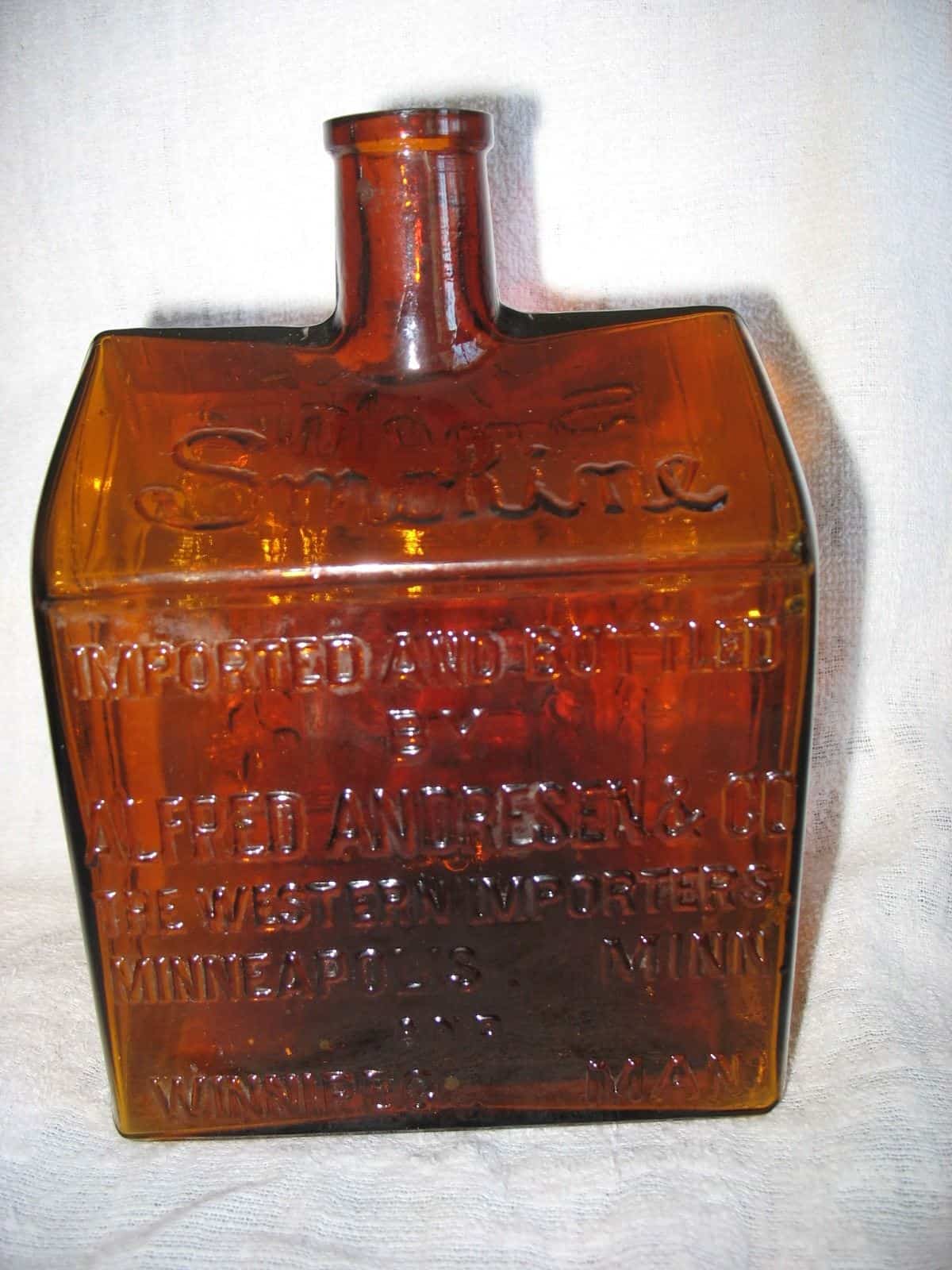 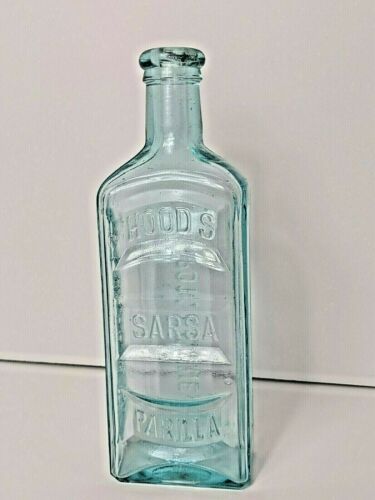 People used this bottle type for remedies made of sarsaparilla roots and other natural herbs mixture during the 19th and 20th centuries. These medicines were particularly trendy in the mid-19th century.

Interestingly, many druggists mentioned the 1840s as the sarsaparilla era. Since this bottle type was also used for other purposes, you need to be careful when identifying them.

People literally used tens of thousands of different cures and remedies sold in various embossed bottles from the 19th to the mid-20th centuries. The Sherley Amendment of 1912 outlawed adding the word CURE on medicinal bottle labels advertised as a medicine in the US.

As a result, most manufacturers started using the term REMEDY instead. Since numerous bottle types were used for this purpose, you can determine a specific bottle on the timeline before 1913, based on the imprinted word CURE.

Local pharmacies and companies used numerous bottles manufactured with their names or addresses directly blown into the glass.

The list of bottles used for medications was practically endless since people used them for keeping: 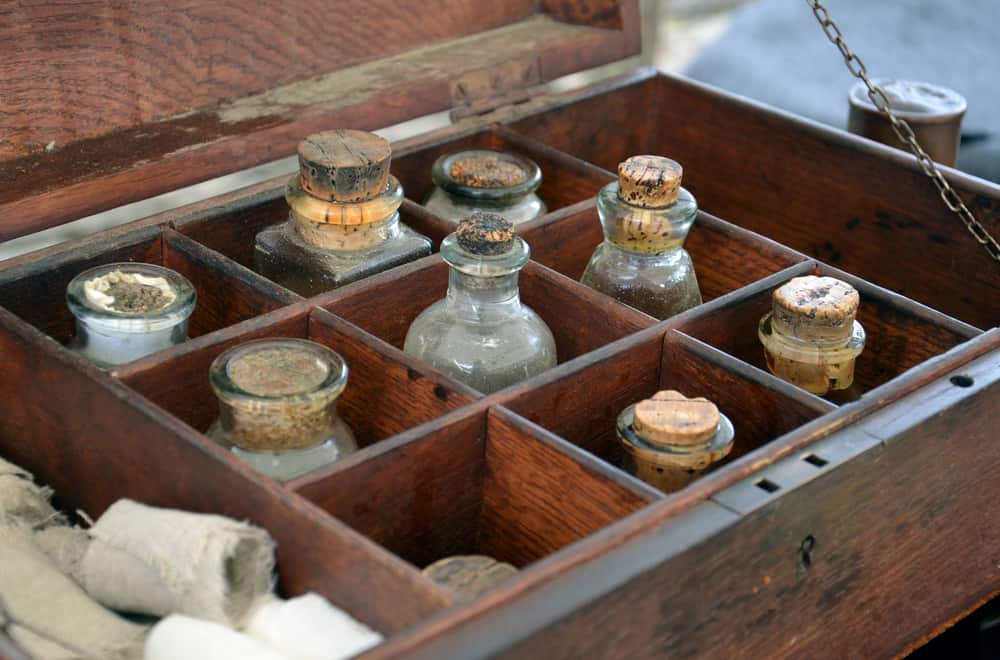 Surprisingly, there is a substantial market for antique glass bottles, placing them among the most sought-after categories nowadays.

Most glass antique medicine bottles were hand-blown, and their shapes were relatively consistent. The most typical include:

Round (cylindrical) – They often came with embossing from the 1860s to the 1880s. Such a shape identified them as products for druggists’ use.

Square – Bottles with or without embossing were relatively standard from the mid-19th to the 20th century but were less popular than other options.

The most common square bottle type was the so-called French square. These mouth-blown prescription bottles likely date to the 1850s but were popular until 1890.

Rectangular – It was a typical shape of a medicine bottle produced from the 1880s to the Great Depression. The most popular was the standard Blake style most glassmakers offered.

Oval – This shape was the most widespread for druggist (prescription) bottle styles. However, their form was not the same, and some bottles were rounded or flattened for one or more sides. The most popular were Philadelphia Oval pieces produced from 1876 to the 1910s.

Homeopathic vials – In most cases, patients got medicine packed in this distinctively shaped bottle type.

Bottles for poisons and chemicals – These bottles were used for keeping potentially deadly or toxic substances and those fatal to human health.

They contained alcohol, antiseptics, iodine, formaldehyde, acids, ammonia, and liniments in most cases. However, some were also used for embalming fluids, vaporizer substances, and pest chemicals, including insecticides.

Their design always warned of the content, entailing bright glass colors, atypical shapes, and the multiple bumps or ridge embossing. Given the diversity of the look of the bottles, you can hardly classify them into a specific category. However, you can recognize: 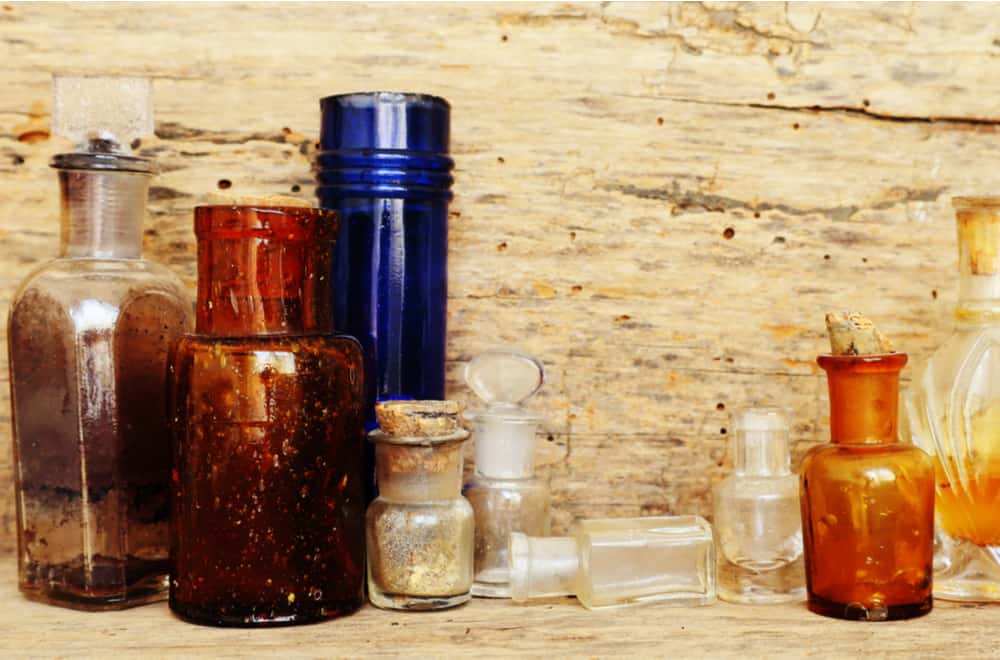 Color is the most effortless feature to notice and often the crucial attribute for bottle value determination. Typically, bottles made of colored glass are more precious than those of clear glass, and most are worth over $1,000.

You could find medical bottles in numerous colors, but cobalt blue was the most widespread in the past. It was an excellent option since that dark color protected the medicine from light.

Amber glass, crucial for perishable and delicate products, was in use for medicine bottles in the 1860s. Different green shade ranges were popular in the US, from forest green to olive green.

From the 18th and 19th centuries, manufacturers used so-called black bottles for medicines. However, such glass was technically in a group of dark-shaded green and amber glass.

Aqua glass was an elegant solution when it was essential to see the product’s color. Manufacturers rarely used milk and white glass for medicinal products.

The final bottle price will depend on both contexts, unusual and appealing exterior color. Sometimes standard colors in combination with an atypical pattern can be valuable.

Age and rarity are related and are crucial factors in bottle value. In most cases, the oldest bottles will be the most expensive. For instance, the earliest pieces created in China are worth thousands of dollars.

On the other hand, millions of antique medicine bottles from the 1800s were produced and survived until these days. Therefore, you can’t get more than a dollar or two for them.

As you can guess, rare antique bottles are typically expensive, particularly those designed for particular purposes. For example, collectors always appreciate pieces dedicated to royals and celebrities.

Interestingly, rare bottles will be costly regardless of their condition. On the other hand, relatively standard bottles should be in a top-notch state to be collectible. You can notice a few phrases collectors use to describe bottle rarity:

Besides, pieces from limited editions or famous ones can reach high value. Believe it or not, some were sold for thousands of dollars at auctions, particularly those in incredible shapes like houses, corn, and human figures. 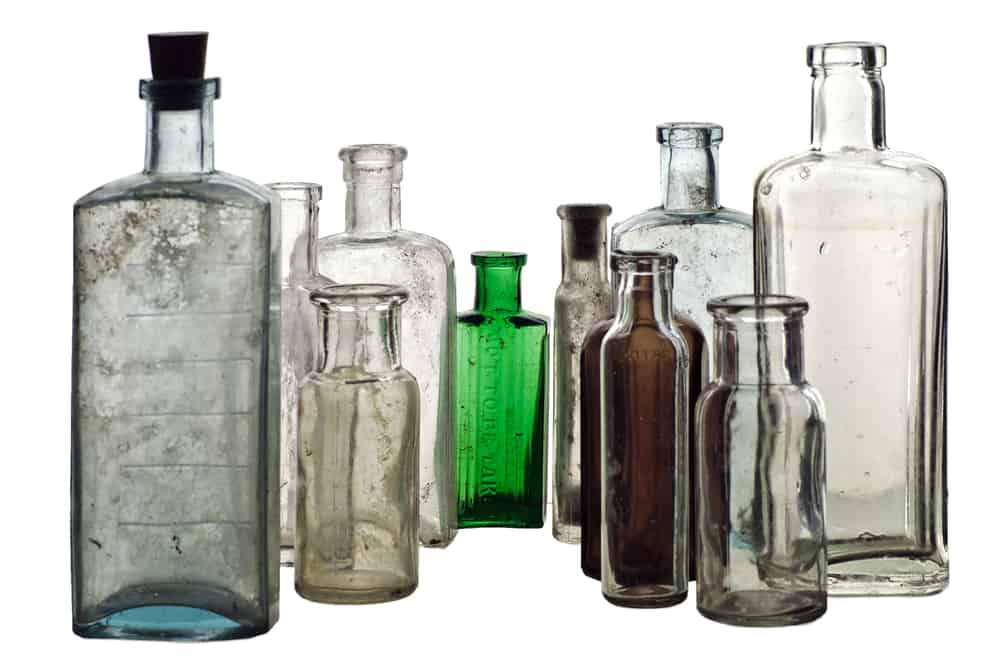 Mint condition bottles without discoloration, chips, cracks, flaws, stains, and visible damage will be the most valuable, particularly the oldest ones. Slight wear pieces are often worth almost the same, while those in good, average, and poor grades will vary in price, depending on wear levels.

The quickest way to date your bottle is to check a pontil mark on its bottom. It came in several styles, including the most common open, smooth, and iron.

Since the early 1800s, companies have started embossing bottles with their brand name, logo, or product name. Some had marked or printed the apothecary’s name and address where people could buy medicine.

Manufacturers from the US and England that produced medical bottles from the 1840s to the 1950s used side-lettered glass molds. Those made in the 1880s had the trademark information on the base.

However, most bottles produced in those times were marked neither with the manufacturer’s brand nor logo, so you can’t determine their age and value this way. The rule of thumb is that bottles with still attached labels reach higher prices.

Elegant and specially shaped or sized bottles are beautiful to collectors. Such pieces typically have higher prices, while ordinary and widely available models are inexpensive. Some odd pieces without use value are practically worthless. 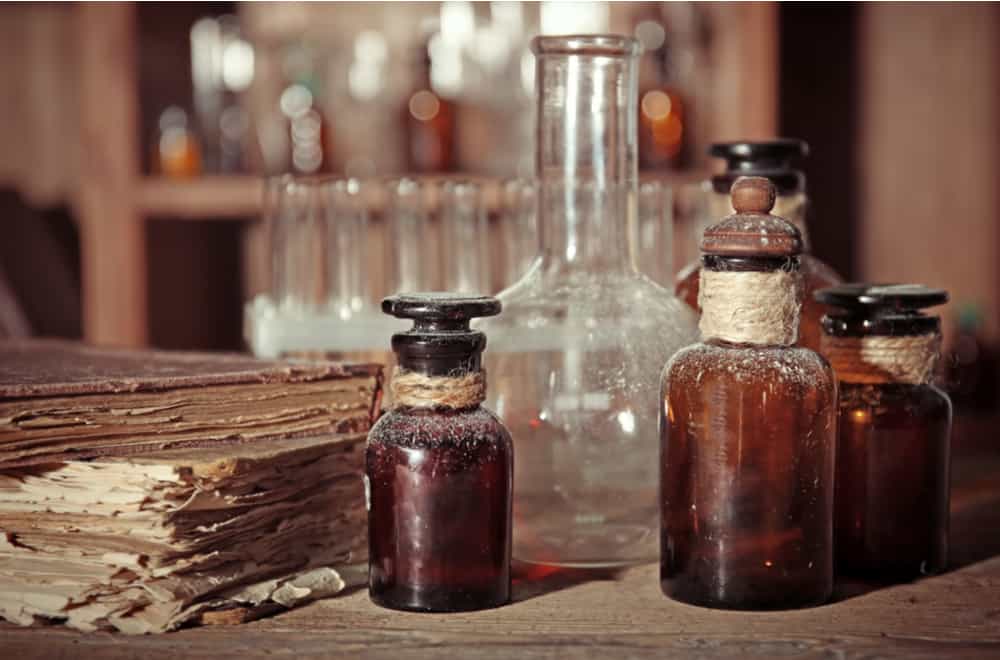 Antique bottles connected with royal families of England, the Middle East, or India can be worth a small fortune. Additionally, historically significant items related to historical events and figures will also be valuable. For instance, you can find pricey bottles:

Sometimes, a particular design becomes viral for some reason, increasing the market demand at that moment. Consequently, such a bottle will be worth more than in earlier periods.

Location with many collectors and low bottle availability will increase prices. On the other hand, numerous antique shops and sale spots will keep the bottle value at the expected level without many variations. Nowadays, online auctions change this factor’s importance.

Since celebrities dictate public opinion these consumption days, any public figure can push grow massive interest for some products. Be careful since such a case often leads to inflated prices unsustainable in the long run.

It is known that this item was sold at a Wild West medicine show in the mid-1800s and is worth a fortune nowadays.

You can divide medicine bottles into several groups, depending on the medicine type they were used for. Some experts recognize over 40 categories since numerous brands didn’t use typical bottles for their products. Such a situation makes medicine bottle collecting one of the most exciting hobbies.