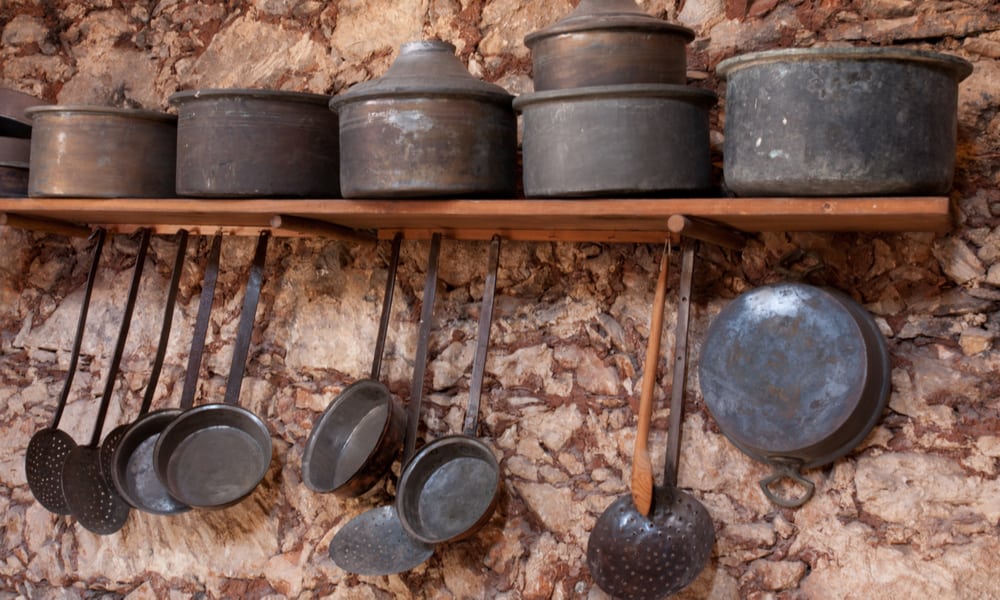 In 1707, Abraham Darby cast the first iron skillet. Even though this thin-sided pot with three feet on the bottom originated in England, American companies started mass production in the late 1800s to his idea. The iron quality made these first pieces durable and valuable.

Thanks to the antique cast iron skillet identification guide, you can check out the piece you have and determine its age and value. Typically, the older iron pans are more quality with more reliable performance and with a lifetime of over 150 years, making them an excellent investment.

What is Antique Cast Iron Skillet?

An English gentleman Abraham Darby created the first thin-sided iron skillet with three feet on its bottom in 1707. This invention enabled housewives to prepare meals on an open fire. By the end of the 1800s, a few American companies took the idea and started large-scale production.

During the 19th and 20th centuries, manufacturers made cast iron cookware by hand. They melted iron and scrap steel in sand molds, while hand manipulation allowed more control over the metal.

As a result, these skillets were convenient and lighter than modern cookware. Such top-notch material allows antique skillets to survive for centuries without much damage.

Interestingly, antique and contemporary models are almost the same, but older versions were made of better quality iron. Plus, machine-made cast iron skillets come with an unattractive rough and pebbly surface.

In other words, old, well-seasoned pans get better over time if owners take care of them well. Plus, they have developed a permanent non-stick patina over time that allows ultimate meal preparation.

In other words, you have to season the new skillet after purchasing. On the other hand, an antique pan is perfectly prepared for cooking from the very beginning.

Don’t be discouraged if you see a neglected and rusty pan since it can become perfect after a thorough cleaning. In fact, buying one is an excellent opportunity to get inexpensive cookware that will cost you not more than $40 per piece.

If you are a collector, you know that finding valuable collectibles requires patience and close observation. Always check the item you want to buy to determine its age, quality, and price precisely. It is better to consult an expert to avoid fraud, especially if you are a novice.

There are a few practical steps to determine whether the cast iron skillet you want to purchase is an original piece. Let’s see. 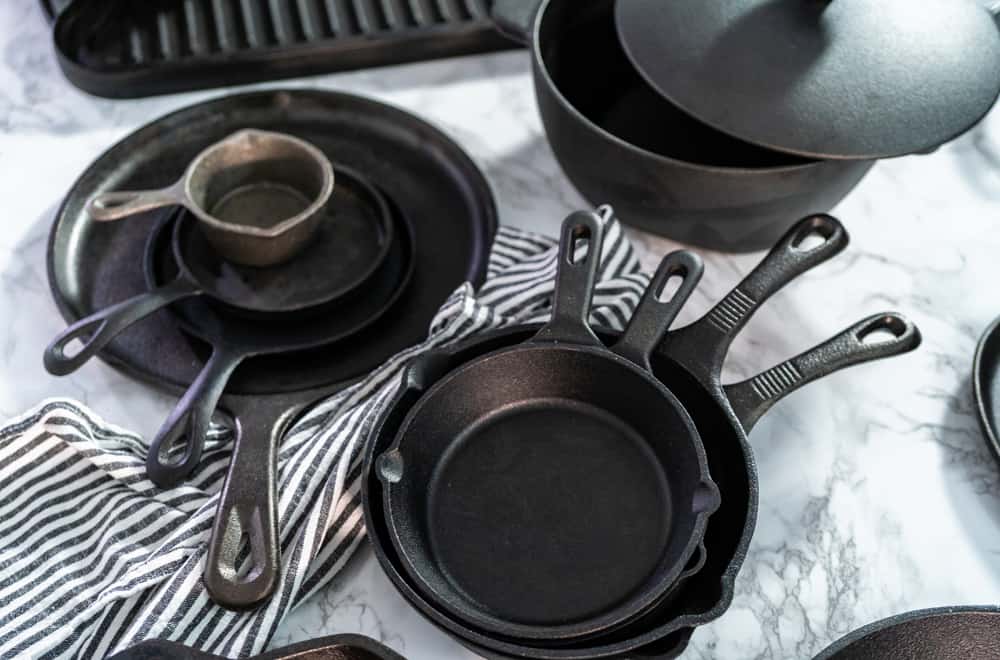 Cast iron skillets were unavoidable cookware in every kitchen during the 19th century. As expected, many companies produced them and gave their best to meet the high demand.

The only way to identify an antique cast iron skillet from the desired manufacturer is to check their logo or mark imprinted into the lower part of the vessel. All notable manufacturers left the mark to make their products identifiable.

However, numerous craftsmen produced cast iron skillets without a mark, so the unmarked piece is sometimes much older than you can imagine.

A helpful piece of information is that skillets produced in the US before the 60s didn’t have the mark identifying their origin. After 1960, the law forced American manufacturers to mark their products with the stamp MADE IN USA.

As you can see, the path of recognizing antique unmarked pans and worthless fake pieces is always challenging. On the other hand, you should only check a reputable manufacturer’s logo to know that the skillet in your hands is the real thing. So, it is in your best interest to study the logos of branded manufacturers.

The famous American Griswold company designed and produced the most collectible antique cast iron skillets you can find on the current market.

Their earliest skillets had an EERIE imprint, determining their location at Erie, Pennsylvania. After a while, the company transformed the logo to GRISWOLD.

Unlike their modern egg-logo version, the Lodge company from South Pittsburg, Tennessee, produced early skillets stamped with the word LODGE. However, they often added marks with the number 8 inside the skillet bowl or on the handle, determining the pan with 10 inches (25.5 cm) in diameter.

Small manufacturers often used to produce unmarked pans instead of big-name department stores. That was a way to protect their regular and more quality products.

However, less known companies had a different approach. They removed the original stamps from bought trademarked skillets and re-market them with the ghost logo. 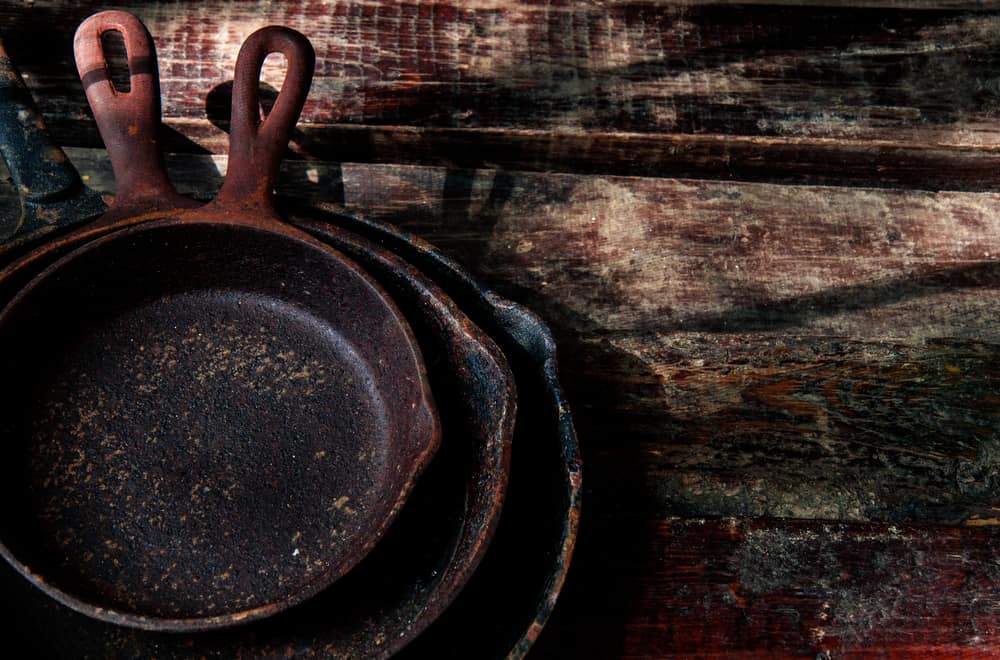 You can see at least one isolated letter or number on the antique skillet bottom. It has a particular significance and refers to the production year, manufacturing place, skillet model, or the inner or outer diameter. Finding these numbers or letters are a definitive sign of authenticity.

For instance, Wagner Manufacturing Co. put a number and letter on both pan bowl’s bottom and front and back of the handle. On the other hand, Griswold skillets from the Iron Mountain Collection added 4-digit codes on the back.

Vollrath pans had a diamond-shaped, underlined, hyphenated number inside the bowl. The next thing to check is the number shape since their pieces produced from 1900 to 1930 typically had embossed numbers. Other brands preferred recessed digits.

If the skillet you want to buy has no letters and numbers, you should look for a gate mark. This distinctive raised slash runs across the pan’s outer bottom. You can’t use this mark to identify the brand, but it is a sure sign that you have an antique piece produced before 1890 in your hands.

Older cast iron skillets produced from the 1750s to 1880s always came with two pouring spouts. They are typically sizable and placed perpendicularly to the handle, while modern pieces feature only one small spout on the handle’s opposite. 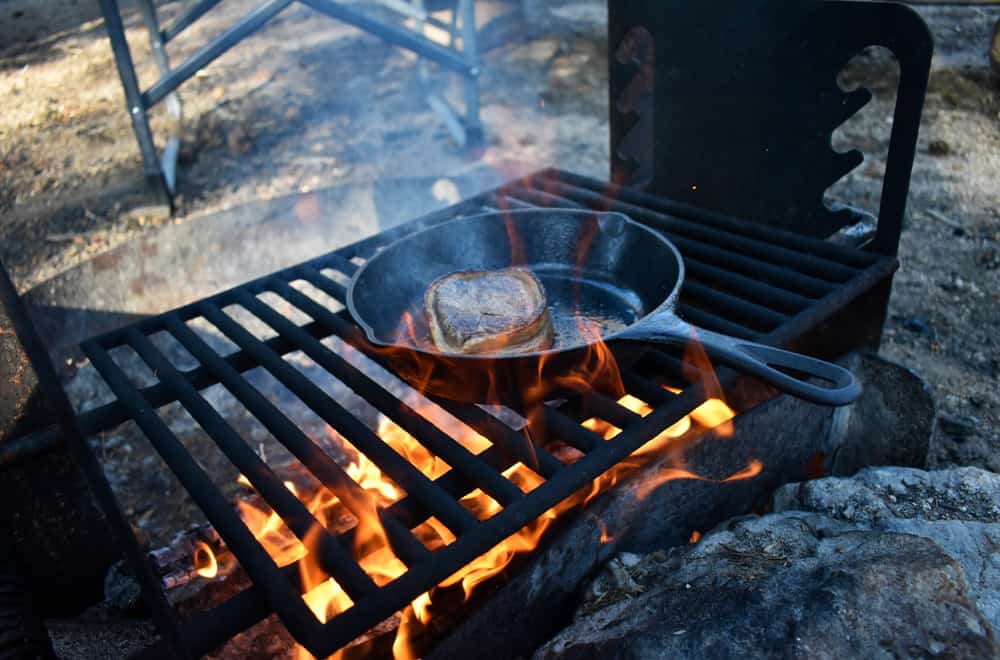 You can recognize an antique cast iron skillet by its bottom. It is always the same as other parts without adding any other materials. It is recognizable for a dark grey to a black color and rough texture.

Each model needed to fit the cooktops perfectly. Since they have changed over time, manufacturers adjusted the pan’s bottoms accordingly. For example, you can notice that antique Wagner’s models have spiral grooves tooled onto the inner skillet surface.

Griswold’s designs are typically flat with extruded heat rings. Sometimes, this manufacturer added three to four projecting notches or nodes to enable the skillet to sit on electric heating plates and gas grills without slipping off.

Lodges preferred rough models with pebbly textures and recessed heating rings on the outer edge. They typically added one to three heating notches at the skillet bottom.

Modern pans with polymer handles and grooved or silicone grips have attached to the pan with screws. On the other hand, the cooking bowl and handle in antique cast iron skillets were made in a mold as one piece without discontinuity. If you find a pan without rivets and screws, you can be sure it is an antique piece. 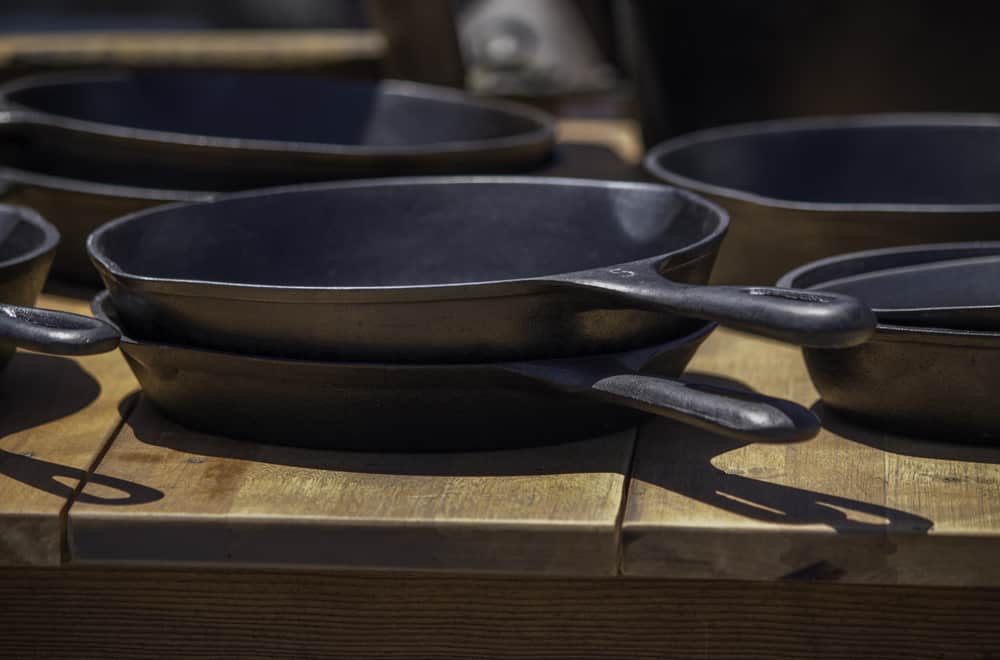 However, standard skillets manufactured in the 19th century typically weighed 8 pounds (3.6 kg) and were 12 inches (30.5 cm) in diameter.

As expected, their actual weight can differ by used material thickness and the size of each piece. Interestingly, modern cast iron skillets are almost always heavier than old ones.

Antique skillets are smooth with a less pebbled surface than new pans. If you find a piece with thicker walls and a pebbled surface, you can be sure that it is a modern version.

As you can guess, a one-hundred-year-old cast iron skillet always contains some damage marks and traces of deterioration. These imperfections are an expected result of aging and time spent on fire.

Sometimes, antique cast iron skillets come with visible rusts on the surface due to poor maintenance. On the other hand, these orange, reddish, or brownish rusted spots are proof that you have the pan made of cast iron.

The problem is that rust is hard to remove, plus it often covers the manufacturer’s marks, making the pan identification difficult.

You will often notice a sizable warp in the middle of an antique cast iron skillet. This imperfection appeared due to uneven heat distribution and made using a pan on contemporary, flat-top stoves difficult.

Collectors define antique cast iron skillets as unmarked when they come without any signs. Since such pieces were probably produced for a narrow market in one of the small foundries during the 18th and 19th centuries, there was no need to mark them.

Unfortunately, these skillets’ identification can be challenging, and their origin will probably stay a mystery forever. However, you can identify one category of unmarked skillets based on the casting’s fineness and unique details.

Several foundries manufactured unmarked skillet versions for reputable companies like Montgomery Ward and Sears Roebuck. That way, it was possible to sell cheaper no-name pieces without questioning their main product lines’ value and the brand image.

Interestingly, these unmarked pans were equal in quality, but that quality was always lower than the regularly marked cookware. They are not considered collectible, but you can use them as the excellent user pans for a lower price. 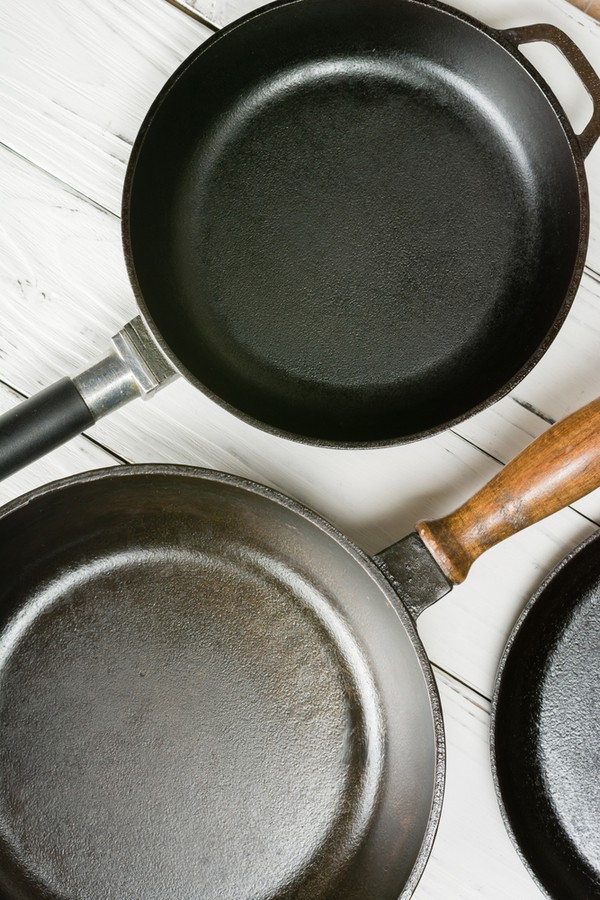 Surprisingly, you can find numerous collectors interested in antique cast iron skillets. They are fine quality and elegant pieces with beautiful casting and markings worth paying attention to.

Cast iron is durable and can last practically forever, making skillets made of this material eco-friendly. Unlike the modern consumer society habits, these pans symbolize recycling, reduced consumption, and endless reusing.

Intriguing history is one of the primary reasons people like cast iron skillets. The first pieces were produced for cooking in China in 5 BC. From the 18th century, numerous manufacturers worldwide created this cookware.

The first American colonists used cast iron skillets to prepare meals on open fires. It is known that Lewis and Clark used this cookware during their expedition.

Most American families used cast iron skillets, and they are valuable family heirlooms nowadays. If you have inherited at least one piece, it will be great to pass them to new generations. You can use this pan forever without appearing out of date. 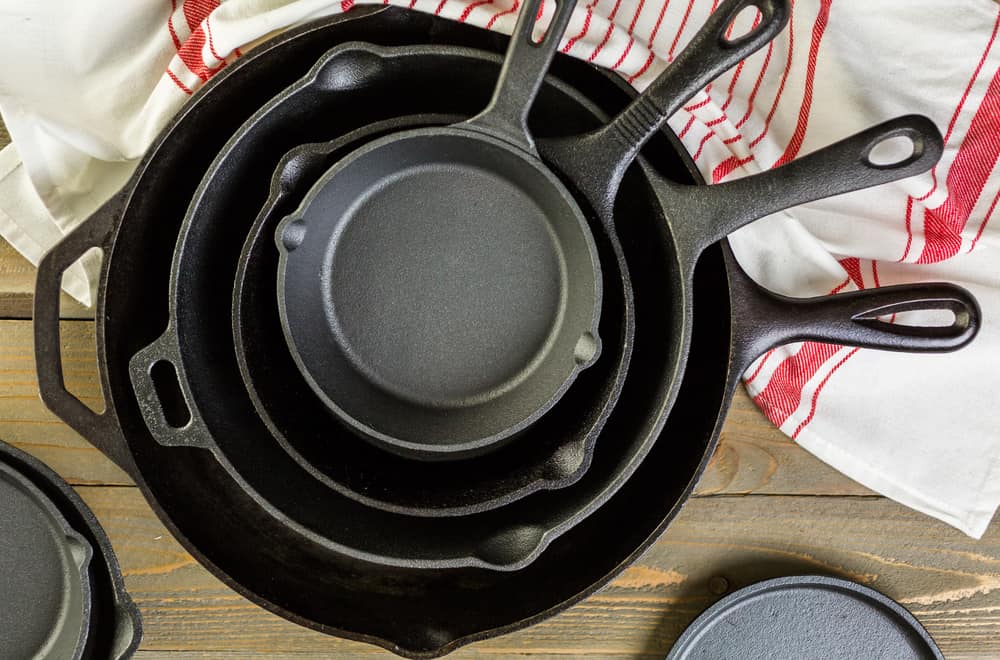 I have already mentioned that durable and high-quality antique cast iron skillets were handmade pieces. Nowadays, they are costly, particularly rare ones produced by Griswold and Wagner that often reach $1,500 at auctions.

The most expensive is a so-called Spider skillet Griswold manufactured in the 1890s. You need to set aside at least $8,000 for such a super rare pan.

On the other hand, some are pretty affordable but never cheap. For instance, a Lodge No. 3 cast iron skillet was sold for $128 at auction, while Griswold No. 8 skillet produced in the 1930s reached $498 at the same auction.

You can effortlessly identify a branded antique cast iron skillet in most cases. However, it can be challenging to determine the origin of those produced in small foundries during the 19th century. Your best shot is to check the molder’s marks, a bottom, decorative handle, and bail handle ears’ shape and style.