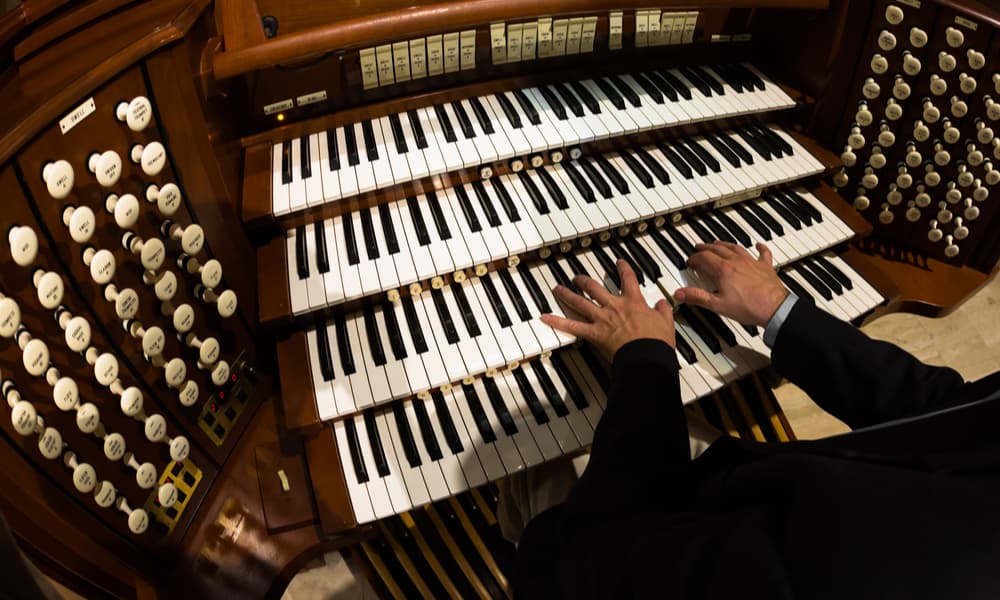 If you came across both instruments, you would probably wonder what is the difference between the organ vs piano? A lot of people cannot tell the difference and usually mistake an organ for a larger piano because after all, they both have keyboards.

The two instruments have plenty of differences as well as similarities. In this article, we will explain what sets apart the organ from the piano.

The Origins of the Organ and the Piano

The organ and piano have different histories.

History of the Organ

Invented by Ctesibius of Alexandria between 200-300 B.C., the organ has a much longer history.

The earliest organ was a complex system that utilized a hydraulic mechanism. The system used increasing and decreasing water pressure to supply the wind that aided the organ to produce music.

After almost 1000 years, music instrument makers replaced water with bellows as a source of wind pressure. This made the organ easier to make and transport.

By the late 19th century, older organs that depended on manual processes such as human blowers and windmills were phased out and replaced by modern ones that were powered by electricity.

Because it produced a louder sound, the organ was a much popular instrument than the piano. However, due to its size, it was and still is mostly used in large, public spaces such as theatres and churches.

History of the Piano

While the performer could control the clavichord’s sound volume, this instrument was too quiet for larger audiences. On the other hand, the harpsichord did produce a loud sound but it was difficult for the performer to fully control each tone.

Cristofori invented the piano to correct the harpsichord’s tone control issues and the clavichord’s quietness. He also sought to change the mechanical workings of these early stringed instruments.

Although the early piano was comparably quieter than today’s piano, it was much louder and easier to control than the clavichord and harpsichord respectively.

The organ and piano fall under different classifications of musical instruments. The organ is categorized as a windwood instrument while the piano is a percussion instrument.

Windwood instruments were so called because they were initially made from wood. However, today’s instruments are made from other materials including plastic and metal or a combination of both.

Organs belong to the same group of windwood instruments as the flute, clarinet, oboe, and bassoon. These types of instruments are basically pipes with an opening at the bottom and are played by blowing air through these pipes.

The piano belongs to the percussion family of instruments but it is also considered a stringed instrument. A percussion instrument produces sound when it is struck or hit.

The hammer action of the piano, which involves the hammer striking strings makes the piano a percussion instrument. The presence of tightened strings in the instrument makes it a stringed instrument.

Pianos vs Organs: How They Work

Apart from their different origins, there are significant differences in how the organ and piano work too.

How does organ work?

The organ is made up of numerous metal pipes many of which are hidden from sight. The instrument produces sound when wind is pressurized through pipes causing the pipes to vibrate and produce sound. The pipes, also known as whistles, sit on top of a wind chest.

To play the organ, the performer uses the various keyboards and pedals found on the instrument. Unlike the pedals on a piano, the organ’s pedals do not help to control or change sound. Rather, they aid in closing and opening the pipes to let in or shut out air.

Each of the thousands of pipes in an organ can only produce one sound. For example, a pipe that produces a D-pitch sound cannot produce a C-pitch sound.

Say you have a range consisting of 60 tones, 60 pipes of the organ are required to produce each timbre in the range. So, if you want to produce 4 different timbres, for example, you will need four times as many pipes as the tones on the range i.e. 60×4, bringing the total to 240 pipes.

How does a piano work?

Although a piano can have as many as 12,000 parts, its working mechanism is simpler than that of the organ.

Three separate assemblies are involved in producing the piano’s sound. These include the key, wippen, and hammer assemblies. When the pianist presses the key, the wippen assembly throws the hammer which then strikes the string to produce a soft or loud sound depending on how hard the key is pressed.

An interesting feature of the piano is that after the hammer strikes the string, it bounces back to its resting position. If this didn’t happen, the hammer would continue to be in contact with the string for as long as the key is pressed, which would cause the string to stop vibrating and the instrument would not produce any sound.

When the strings vibrate, the piano produces the desired sound. The length, density, and tightness of the strings determines whether the string will play a low or high note. In most pianos, each note has three strings that vibrate simultaneously to produce a melodic tone.

Pedals give the pianist control over the sound he wants to produce. The conventional grand piano comes with three pedals: the right, middle, and left pedal.

The right-hand pedal keeps the damper off the strings to allow the sound to continue reverberating after the pianist releases the key.

The middle pedal, known as the sostenuto pedal, keeps the damper off the strings to hold certain notes while the piano plays new notes at the same time.

The left pedal is also known as the ‘una corda’ pedal. This pedal helps to produce a softer sound by ensuring that the hammer strikes just one or two, instead of all three strings, for each note.

The mechanism with which the organ and piano produce sound is quite different too.

With a piano, how hard the pianist strikes the key makes a big difference to the sound the instrument produces. When playing the organ, whether the performer strikes the key hard or softly does not affect the resulting tone.

In an organ, once the performer lifts their finger from the key, the sound stops.When playing the piano, the performer can use the middle pedal to sustain the sound long after they have released the key.

The hammer action in a piano determines the tone the instrument produces during a performance. On the other hand, the type of stops or ranks of pipes the organist selects influences the tone the organ will produce.

Differences In The Range Of Sound

Compared to the organ, a piano is slightly limited in the range of sounds it can produce. The piano only sounds like itself while an organ can be altered to sound like different instruments.

When playing the organ, the stops they choose will determine the type of sound the instrument will produce. Stops are simply a set of pipes in a given rank in the organ.

The organ’s stops are named after the kind of sound they produce. For example, there are trumpet stops, flute stops, and Diapason stops, just to mention a few. The organ has numerous stops, giving the organist plenty of options to produce a wide range of melodious tones.

The piano and organ are significantly different in the way they are constructed.

The piano has just one level of keyboards consisting of 88 keys. The grand staff is the main source of reference for the pianist.

On the other hand, an organ has two levels of keys known as manuals. Each manual has a specific number of keys depending on how many octaves the instrument has. The more the number of octaves, the more keys the organ will have.

The organ also comes with a pedalboard. The organist presses the pedalboard using their feet to produce varying sounds out of the pipes.

Although the organ and piano keyboards look and work the same, there are some differences. The organ has comparably shorter and narrower keys that produce sound at the slightest touch.

The organ and piano seem quite similar but they have distinct characteristics that set them apart. If you are looking to play the organ, a good first step is to get acquainted with and learn how to play the piano.