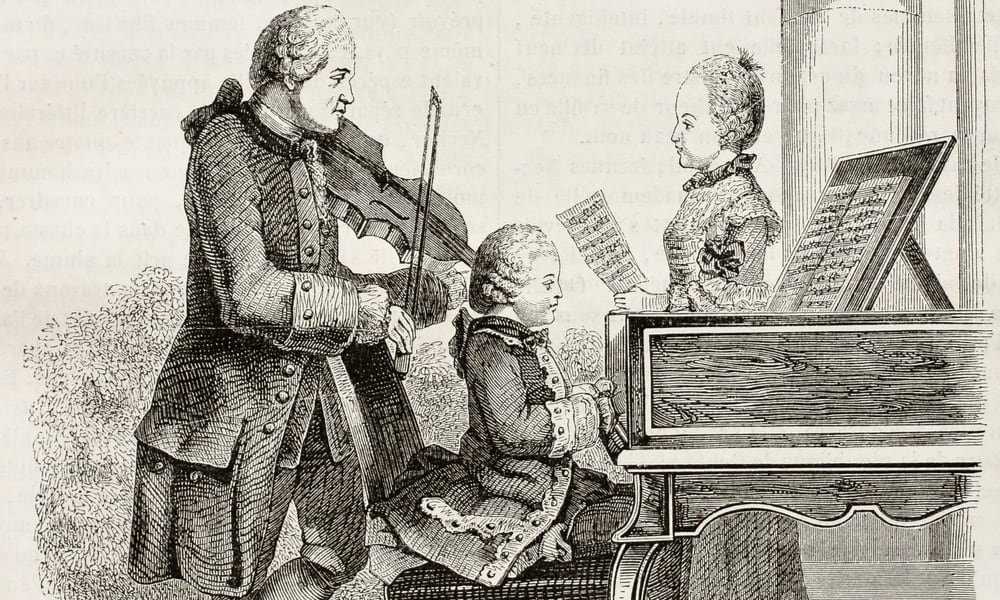 The oldest surviving piano resembles a harpsichord and is considerably different than the modern grand piano. It was placed in a wing-shaped case and had a single keyboard without pedals. It also had only 54 instead of 88 keys, while the strings were thinner and the hammers harder.

Plus, its muted tone suited better for solos performance rather than for larger ensemble. However, once it was constructed, it was easy to improve and upgrade it. Let’s see when and who invented the piano three centuries ago.

It is not widely known, but the inventor of the first piano is Italian Bartolomeo Cristofori from Padua. He started his career as the ‘Keeper of the instruments’ at the court of Ferdinando de’ Medici, Grand Prince of Tuscany.

Well-known as an expert harpsichord maker and inventor, Cristofori had a vast knowledge of stringed keyboard instruments. He decided to make a loud instrument similar to a harpsichord, but touch-sensitive like a Renaissance clavichord, at the same time.

The first piano was born

He took the hammered dulcimer as a base and constructed the instrument containing a wrapped hammer that hit at a particular string after pressing a key. How fast the hammer flew, depended on the pressure strength on the key.

The point was that string kept vibrating freely after the hammer struck it. However, the string vibrated only while the key was held down. Once a pianist released the key, a damper quieted the string. That allowed a better sound volume modulation.

Cristofori named his new instrument – A keyboard of cypress wood with soft and loud (Un cimbalo di cipresso di piano e forte). Historians are still not sure about the exact date when the first piano was constructed, but it happened between 1698 and 1700.

It is known that the keyboard was different since the accidental keys were white, and natural ones were black, which is the opposite of a modern piano.

The first record of a new instrument

The first mention of the newly invented device dates from 1700. An inventory list of Prince’s instruments contains the newbuilt piano, which name, translated from Italian is – An Arpicembalo (that means harp-harpsichord) by a new invention Bartolomeo Cristofori that produces a soft and loud sound.

However, this genius inventor was mostly unknown until 1711. That year, Scipione Maffei, an Italian writer, wrote an article about Cristofori and his product with a diagram of the mechanism included. That was a trigger for other manufacturers to start working on the new instrument, based on Cristofori’s idea.

Three original pianos made by Cristofori during the 1720s survived centuries. Only one, created in 1722, is located in Rome, in the Museo Strumenti Musicali. The oldest one, designed in 1720, is exhibited at the Metropolitan Museum of Art while the youngest one, made in 1726, is owned by Musikinstrumenten, Museum of Leipzig University.

Reasons why Cristofori is not better known

Nowadays, we don’t know much about Cristofori, and one of the questions is why the piano didn’t get the name after its inventor. The probable reason is that this man was respected, but basically, only a hired hand that served the court. Consequently, he was considered one of about 100 other artisans in a royal machine.

Even though the Prince encouraged Cristofori to innovate, his primary task was tuning, restoring, and moving all the instruments existing at the court. Therefore, he was only a talented tinkerer in the eyes of the nobility of the time, no matter how talented and revolutionary genius he was.

On the other hand, it would be impossible for him to make such a complicated instrument without the Medici family’s support. Over time, Cristofori managed to sell some pianos. However, he didn’t possess a patent, so everyone was free to make, sell, and change the improved instrument as desired.

There was one more thing. The piano was a revolutionary and complicated instrument, so it took a long time to become famous. The real boom started about 100 years later, in the 18th century. Even Johann Sebastian Bach hated it initially, and Mozart preferred to play the harpsichord as a child.

All the circumstances probably lessened the fame of the inventor.

Cristofori’s piano was one of the greatest technical achievements of that age, even though it took a while for this instrument to become famous and generally accepted.

Meanwhile, a German organ builder Gottleib Silbermann read about the new instrument and decided to design his own by improving Cristofori’s idea.

His contribution was a sustain pedal added to allow taking all the dampers off of the strings at once. This genius invention let strings ring a while even after the pianist lift fingers off the keys.

Firstly, Silbermann showed his improved piano to Johann Sebastian Bach in 1736. Unfortunately, he didn’t like the instrument at the very beginning because of too soft high notes. Therefore, Silbermann made a few changes until Bach became finally satisfied in 1747.

Moreover, he improvised a three-part figure on a king Frederick the Great of Prussia theme when he visited his court in Potsdam. After that, the piano became popular among composers and nobles across Europe and the British colonies in America.

As soon as Silbermann started with serious piano production, Bach became his piano salesman and authorized dealer. Moreover, he gave the instrument the new name, a piano et forte, which literally means ‘soft and loud.’

Over time, this name has changed, and you can find terms such a pianoforte and fortepiano, as well. Nowadays, the name of this dynamic instrument is simply – a piano.

Sebastian LeBlanc wasn’t an inventor and didn’t know anything about pianos, but contributed to the history of this instrument because he was a practical man. He was credited for having the natural keys were not black as in the first piano and the accidental keys white.

His idea was to switch them and, thanks to him, the modern instrument looks like this today with white natural and black accidental keys.

Domenico Del Mela was one of Cristofori’s assistants. It is believed that he was the one who invented the first upright piano in 1739.

This man, along with Robert Stodart and Americus Backers designed one of the first pianos in the harpsichord case in 1777. It was actually the instrument all contemporary grand pianos originated from. The Broadwood firm had a significant role in the early technological piano progress and produced more massive, robustly constructed, and powerful instruments.

The inventor of the modern upright piano was Austrian Johann Schmidt from Salzburg, the Mozart family’s friend. One of the Schmidt’s pedalboard with eighteen notes piano from 1790, which has been preserved to this day, saves the scratched initials of Wolfgang Amadeus Mozart.

In 1801, this organ-builder, inventor, and piano forte-maker patented moveable keys for organs, pianofortes, and other instruments. Basically, he invented the transposing piano with a lever under the keyboard.

Thanks to this, a pianist could move the keyboard relative to the strings. It was helpful since playing in a familiar key resulted in music sounding in a different one. This model is rare nowadays.

He was a French instrument maker who invented the double escapement action in 1821. That incorporated a balancier (repetition lever), which allowed rapid repeating notes before the key rose to the maximal vertical position. The first composer who recognized the value of this invention was Liszt. Since then, this construction became the standard in all grand pianos.

He was also the first piano maker in Paris who added a sustaining, celeste, action shift, and bassoon pedals on the piano. All his technical innovations referring to the keyboard action, tuning mechanism, and soundboard are parts of all modern piano designs.

This French piano and harp maker and innovator was the first master that introduced felt in 1826. Until that moment hammer was covered with layered leather. It was a huge improvement since the felt was a more consistent material. Plus, it allows more extensive dynamic ranges while string tension and hammer weights increased.

He also invented over-stringing and placed the bass strings in the higher plane instead of the previous practice of making them a continuation of a one-string plane. That allowed the construction of the narrower cabinet.

Jean-Louis Boisselot was the inventor and founder of the famous French piano company Boisselot & Fils. His significant contribution to the modern piano was the piano sostenuto pedal, which he invented in 1844. After thirty years, Steinway improved this pedal in 1874 that allowed more effects.

That was the man who invented the player piano in 1863. That model was fascinating since it didn’t require a pianist. Yes, that unusual piano played itself from a roll without human help.