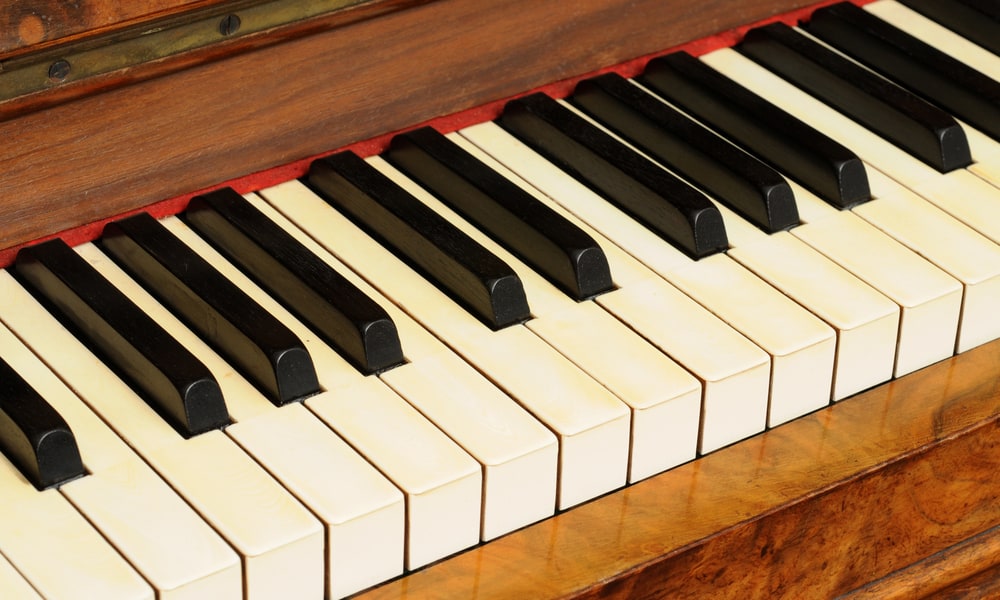 Most modern pianos come with 52 white keys and 36 black ones. Keys are such a regular part of the piano that the average pianist hardly stops to wonder what are piano keys made of.

The keys on your handsome clavier actually have a rich history. Read on to find out more about the various materials that have been used to construct piano keys over the years.

The History of Pianos

Before we find out what piano keys are made of, let’s talk a bit about the history of this beloved instrument.

An Italian musical instrument maker by the name Bartolomeo Cristofori invented the piano around the year 1700. Initially known as “clavicembalo col piano e forte”, the early piano originated from the harpsichord.

Cristofori plucked out the harpsichord string mechanism using a hammer to create what we now know as the piano.

Today, the piano is among the most loved musical instruments but it only gained popularity starting in the 1760s. By the start of the 1800s, it was a symbol of status, gracing the drawing rooms of the affluent elite.

Pianos and The Ivory Trade

The very early pianos consisted of keys made from sugar pine. Sugar pine is the largest type of pine tree. Wood from this tree has a straight grain pattern, making it a suitable material for constructing the sound-producing pipes found on the keyboard instrument known as the organ.

The piano’s rise in popularity in the late 1760s in Europe and the United States of America (USA) also saw an increase in the demand for elephant ivory. In fact, by as early as 1840, the USA was the world’s largest importer of ivory.

Ivory has always been associated with opulence so it is unsurprising that manufacturers opted to use ivory to construct piano keys. While the white keys were made from ivory, the black ones were made from ebony.

To make the keys, the ivory was cut into thin flat pieces that were then mounted to wooden keys. One elephant tusk would produce as many as 45 keyboards complete with all the white and black keys.

Because of its smooth feel and the fact that it was quite cheap, ivory was the material of choice in the construction of piano keys until as recently as the 1950s.

What Are Modern Keyboards Made Of?

Elephants and most other ivory-yielding animals are now categorized as endangered species. Over the years, many countries have made it illegal to buy or sell ivory. Consequently, most manufacturers of modern pianos no longer use ivory to make the piano’s white keys.

Aside from it being a very controversial material, ivory also has other downsides. For one, keys made of ivory tend to chip faster than plastic ones. Additionally, ivory is porous, which means it absorbs dirt faster and yellows easily.

Today, the most common materials that piano keys are made of are:

The keyboard maker, Yamaha, is credited with introducing ivorite for the construction of piano keys.

Ivorite is a synthetic plastic that mimics some properties of ivory including moisture absorption and the texture. Plastic is accessible, affordable, and easy to carve into the desired object, including piano keys.

Other piano makers followed suit and most now use some sort of synthetic plastic to construct their keys.

The closest substitute for elephant ivory is a palm tree known as Phytelephas aequatorialis, which literally translates to ‘elephant plant.’

The Phytelephas aequatorialis tree naturally grows in South America, particularly in Ecuador, Peru, and Bolivia and its seeds produce what is known as ‘vegetable ivory.’

Inside the seeds is a hard and dense substance known as hemicellulose that can be carved, treated, and polished like real elephant tusks and used to construct piano keys and other artifacts.

Unlike real ivory that requires elephants to be killed, the vegetable ivory plant is a renewable resource that produces seeds throughout the year.

On the downside, the seeds are quite small, growing to about 4-8cm, which limits the commercial use of vegetable ivory.

Are My Piano Keys Made From Ivory?

You might have mixed feelings about owning a piano with keys made of ivory. On one hand, ivory keys are not only a status symbol; they are also smooth to the touch, a quality every pianist wants from a keyboard.

On the other hand, ivory has a long, bloody history. Over the years, millions of elephants have been killed for their tusks. Elephants are now an endangered species that might soon become extinct.

Also, starting from the 1800s, European merchants brutally coerced Africans into the ivory trade, using them as slaves for shipping ivory bound for America.

The truth is, if your piano was built prior to 1950, the keys are likely made of ivory. Here are other ways to tell whether you have ivory piano keys:

What To Do If Your Piano Has Ivory Keys

If you love your antique piano but are uncomfortable with the ivory, consider replacing the keys with plastic ones.

Some piano technicians specialize in replacing old piano keytops and can swap your ivory keyboard for a plastic one.

As long as it is high-quality made-for-piano plastic, you shouldn’t worry about your instrument losing value. The truth is, plastic keys are smooth to the touch and tend to be more responsive than ones made from ivory.

Can you imagine what it would be like if piano keys were all the same color and height? Learning how to play this instrument would probably be very difficult! This highlights the importance of the keys on a piano.

Now you know what piano keys are made of– if yours is an antique, the keys are likely ivory but most modern ones are made of high-quality plastic or vegetable ivory.

Do you have an antique piano? Are you looking to keep or change the keys? Let us know in the comments!