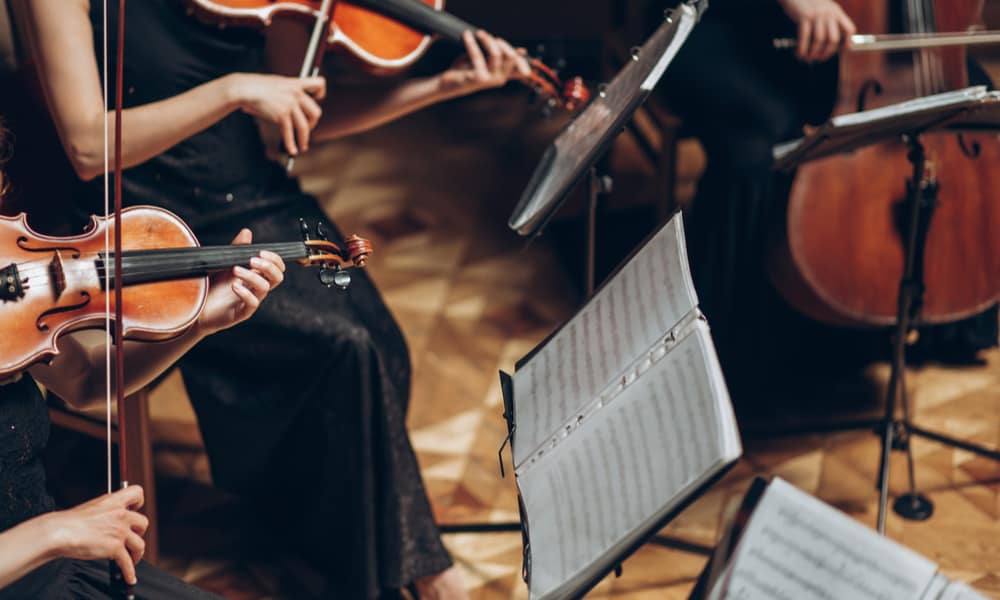 I can’t explain how hard it is to separate just 31 best violin songs among hundreds of phenomenal compositions. However, here are some of the best pieces the world has ever heard.

Whether you are a romantic, classical-tune lover, or you enjoy a rock music style, you will find something for yourself. There is no music genre in which there is no place for this magnificent instrument. Enjoy!

Even though he was deeply depressed, Tchaikovsky tried to recover from a broken marriage in 1878 when he finished his magnificent Violin Concerto. It is probably his best-known, but also the hardest piece to play. Russian violinist Adolph Brodsky was the first one who played this, 35 minutes long masterpiece in 1881 in Vienna.

The Italian academic Remo Giazotto discovered and saved an unknown fragment of Albinoni’s music during the Second World War. He completed this fragment written in the mid-1900s, and the world of music could start enjoying the heart-breaking Adagio. It is enough to hear the violin sobbing only once and to lose your heart forever.

Chaconne is an introduction to famous Bach’s violin piece composed somewhere between 1717 and 1720. American violinist Joshua Bell claimed that this great, spiritually powerful piece was the ultimate achievement of any man in music history. Its structural perfection includes five movements that capture the audiences from the beginning to the very end.

4. Concerto No. 5 in A Major (Wolfgang Amadeus Mozart)

Without Wolfgang Amadeus Mozart, classical music would have an entirely different dimension. The genius composer made this vibrant piece by filling it with uplifting elements.

It will put a smile on the face of everyone in the audience from the moment the violin begins its spell. It will start melting your hearts from the very beginning and won’t give up that mission until the concerto’s end.

Beethoven posed an ultimate challenge to all composers after this beautiful work saw the light of day. Austrian violinist Franz Clement had the privilege to be the first one to perform this concerto in 1606. More than two centuries after that moment, Hungarian violinist Joseph Joachim made this highly energetic piece extremely popular in 1844.

Czardas is definitely one of the violin pieces you should hear before dying. This Italian composer wrote one of the most magical musical compositions in 1904. It used a csárdás (traditional Hungarian folk dance) as a leitmotiv and mixed it with raw Italian emotions to get the level of sentimentality that only the violin can create.

7. Concerto No. 1 in A Minor (Dmitri Shostakovich)

When you say Shostakovich, you think about the deepest emotions hidden in your soul’s places where you have no courage to peek. Each chord’s haunting beauty will definitely wake up all the melancholy you keep safe inside your heart.

He wrote this modern masterpiece in 1947 as a revolt against the totalitarian communist regime. The audience had a privilege to hear dramatic violin wrestling against the orchestra in 1955 for the first time.

Mendelssohn composed this enchanting concerto when he was only 13 years old. Its joyous structure will take you on a romantic journey to fall in love while the violin strings flicker.

Once you hear all the concerto layers, you won’t forget this emotion until the end of your life. The first premiere of this last major orchestral work that Mendelssohn made took place in 1845.

Bach composed this Orchestral Suite No. 3 in D Major for violin and orchestra. However, German violinist August Wilhelm was the one who wrote an arrangement of the part ‘Air’ in the 19th century. He singled out a soloist instead of a group of first violins, required it to play the whole section on the violin’s lowest string, and transformed the great music to a real masterpiece.

Among the four Vivaldi’s seasons, aficionados that look for drama mostly prefer the Summer composed about 300 years ago. Between numerous composers making fantastic pieces for the violin, Vivaldi excelled by crossing the line of dreams and making the violin flicker like never before.

This Estonian composer made a miracle with this lovely piece, which literally means Mirror in Mirror. His idea was to write a composition for violin and piano that offers a unique meditative feel. You will enjoy each second, I promise!

Without any doubt, Paganini made a technically perfect and highly virtuosic composition for the violin. The incredible solo section is probably the most complicated piece ever written for this gentle instrument. Undoubtedly, only a top virtuoso can reach this classy and uniqueness violin’s strength.

Thanks to this piece, I fell in love with classical music when I was a child. It was proof that this kind of music didn’t need to be difficult and incomprehensible. Beethoven made this masterpiece easy-to-enjoy, while the violinist’ goal is to demonstrate the instrument’s full power.

Everyone has heard this march at least once in a lifetime. In fact, there is probably no bride who wants to get married without the beautiful sound of a violin that melts the heart in that most special moment in every woman’s life. This song is not complicated to play on the violin but has the power to make our day.

This well-known classic is an incredibly upbeat tune that can make you smile like a child and dance like a pro. The piece sounds fun but requires some tricky bowings at the same time. If you appreciate Rossini’s opus, you will adore this unique piece.

Although it is the first of 24 Paganini’s caprices for solo violin, Arpeggio is lesser-known and incredibly challenging to play. Even the composer had a problem to master it at first. You probably won’t like this inspiring piece after the first listening, but it will win your heart over time.

17. ‘Meditation’ from Thaïs for Violin and Piano (Jules Massenet)

Meditation is a rare opportunity to understand how an exquisite instrument the violin actually is. This lovely tune shows the whole incredibility of its emotional range while retaining the heart-breaking melancholy in the happy key of D major. Sit back in your armchair and let this harmonious melody take you to a wholly different and exciting world.

Only the beloved woman can create such a beautiful piece. Clara was the world’s most appreciated piano virtuosos in her time. This unbelievable trio of chamber works shows all the splendor of her talent and unconditional love of the violin.

Clara performed this unique piece with a Hungarian violinist Joseph Joachim in front of King George V of Hanover, who was thrilled and absolutely ecstatic after the concert.

As a prominent composer of the late romanticist style, this incredible man left an indelible mark in Serbian and world music of the early 20th century. Symphonic fantasy is an incredibly melodic and colorful concert piece for violin and orchestra you will adore.

Believe it or not, Jewish composer Joseph Achron created this beautiful melody in just half an hour because the meeting with Rimsky-Korsakov’s student Salmon Rosovsky incredibly inspired him.

Therefore, the composer wished to use that conversation and create something unique. The result is one of the most beautiful violin songs of all time. That man strived to nurture the beauty of Jewish folk music and luckily made a foundation for this masterpiece.

21. Nothing Else Matters (Metallica)

It is one of the most powerful ballads American heavy metal musicians have ever created. Metallica released it in its fifth studio album in 1992. Nowadays, it is probably the best-known single of this band.

German violinist David Garret included it in his repertoire more than a decade ago. I don’t want to imagine growing up in a world where this song doesn’t exist.

Nirvana started a real rock revolution after releasing this song in 1991. This band rejected the glamour rock style popular in the 1980s and established Grunge Rock. I believe that the violin used in this particular song helped in recognizing it as a rock anthem for Generation X.

This cult song, released in 1966, is an excellent example of haunting. It offers the violinist the opportunity to practice a few crucial techniques in various musical contexts. This music track covered by a string quartet is on the 500 Greatest Songs of All-Time list.

The Williams’ gorgeous soaring melody is a satisfying piece for every violinist. Before 1920, it was intended for violin and piano, but it was then reorganized for solo violin and orchestra. This epitome of nostalgia and lovely pastoral romanticism is one of the favorite musical pieces for violin lovers in Great Britain nowadays.

I adore this traditional Johnny Cash’s folk violin song like everybody else. The violin describes the scenic beauty of the train route in an incredibly emotional manner.

Since it is an easy-to-perform piece, it is an ideal choice for violin novices. If you thought Johnny’s voice couldn’t sound better, you would change your mind after hearing it combined with the flickering violin strings.

This song is undoubtedly the most influential Martie Maguire’s fiddle work. Her sad and unique playing brought the song to the No. 1 position on the charts after releasing it in 1999. After a quiet opening, you will enjoy the mid-tempo country-pop groove with nice fiddle breaks. You will love it!

This extraordinary lively Mexican folk song with an unrepeatable upbeat tune was written in son jarocho musical style. Ritchie Valens made this song world-famous in 1958 when it was included in the top 40 hits in the US charts. New generations fell in love with this melody in 1987 when Los Lobos made a version as a title track of the La Bamba movie.

28. The Devil Went Down to Georgia (Charlie Daniels Band)

Charlie Daniels Band wrote and started performing this song released in 1979. Initially, the melody was written in an octave lower. Luckily, we can enjoy the rearranged version written in the key of D minor. It is probably the band’s biggest hit, and many perform it at concerts nowadays as one of the most known anthems of folk music.

Probably every living creature on the earth has heard about this music, whether they watched the series or not. Nowadays, it is one of the most loved and played themes on YouTube. Plus, this melody is an excellent practice for violin novices since you only need G and D strings to perform it.

Every time I watch this movie, I couldn’t stop crying. I experienced this incredibly moving story deeper and more emotionally thanks to the incredible violin sobbing. It made the story more real and terrifying. The virtuoso Itzhak Perlman created a miracle and gave us a touching song we can’t ever forget.

It probably sounds weird, but this is one of the most popular musical themes for most sci-fi admirers worldwide. They listen to these notes and play the song on numerous occasions. Plus, many violinists included it in their repertoires. The excellent news for all violin beginners is that they can play this melody as soon as they finish the first level.