Post Cereal started printing baseball cards on its cereal boxes in the 1960s, releasing over 600 different cards in a span of 3 years. The company jumped back into the baseball card ship in 1979, then in the 1990s, and finally in 2001, before stopping for good.

As a result, only baseball cards from the first three sets – 1961, 1962, and 1963 are valued by baseball card collectors. However, because the cards had to be hand-cut from the boxes, there aren’t many examples that are graded PSA 10.

Nonetheless, there are some PSA 9 Post Cereal cards, and those can sell for thousands of dollars. In this article, we’re going to take a look at the top 10 most valuable Post Cereal baseball cards, and learn about the players on those cards. Chuck Stobbs pitched half of his career, 8 out of 16 seasons for Washington Senators, and is considered one of the best pitchers of the franchise. His career started at the age of 17 when he played a single game for the Boston Red Sox in 1947. Hank Aaron was a right fielder who hit 755 home runs in his 23-season long career. It’s the 2nd most career home runs in MLB history, only behind Barry Bonds. More importantly, Hammerin’ Hank started his career in the early 1950s.

Racism was rampant in professional sports, baseball included. Despite such circumstances, Hank Aaron managed to pave a way for equality and became the icon of civil rights in MLB.

In the 2016 online auction on eBay, a PSA 9 Hank Aaron #107 card from the 1961 Post Cereal set sold for $855. It was actually sold by PWCC, which is the biggest trading card seller on the platform. Harmon Killebrew had a 22-season long career in MLB, primarily playing as a first baseman, but sometimes as a third baseman or a left fielder. During his career, he scored 573 home runs, placing him top 12 all time.

Nicknamed “The Killer”, Killebrew Killebrew won the Baseball Writers’ Association of America Most Valuable Player award in 1969. The same year, he led the American League in home runs for the 6th time in his career. Jim Landis was a center fielder renowned for his defensive ability. In his short 11-season career, he managed to win 5 consecutive American League Gold Glove Awards and was named all-star twice.

Despite achieving that much in just 10 seasons, Jim Landis had a tragic 11th season of his career and played for 3 different teams. Such a stained last page of his baseball career didn’t stop him from being remembered to this day.

While there are more impressive baseball players that even aren’t on this list, a PSA 9 Jim Landis #50 card from the 1962 set sold for nearly $1,100 in a 2020 auction on eBay. It’s one of a few Post Cereal baseball cards that have sold for a 4-digit sum. Bob Clemente was a Puerto Rican right fielder who played his entire 18-season long career for Pittsburgh Pirates. He was inducted into the National Baseball Hall of Fame in 1973 and is widely regarded as the best athlete from Puerto Rico to ever compete in MLB.

Naturally, his Post Cereal cards are among the most valuable. While there aren’t any PSA 10 Bob Clemente #132 cards from the 1961 set, those graded PSA 9 has sold three times in the past 15 years:

It results in an average value of $1,420, and we can clearly see an upwards trend in its value throughout the years. Who knows, maybe the next time it sells, it sells for much more than it did the last time. 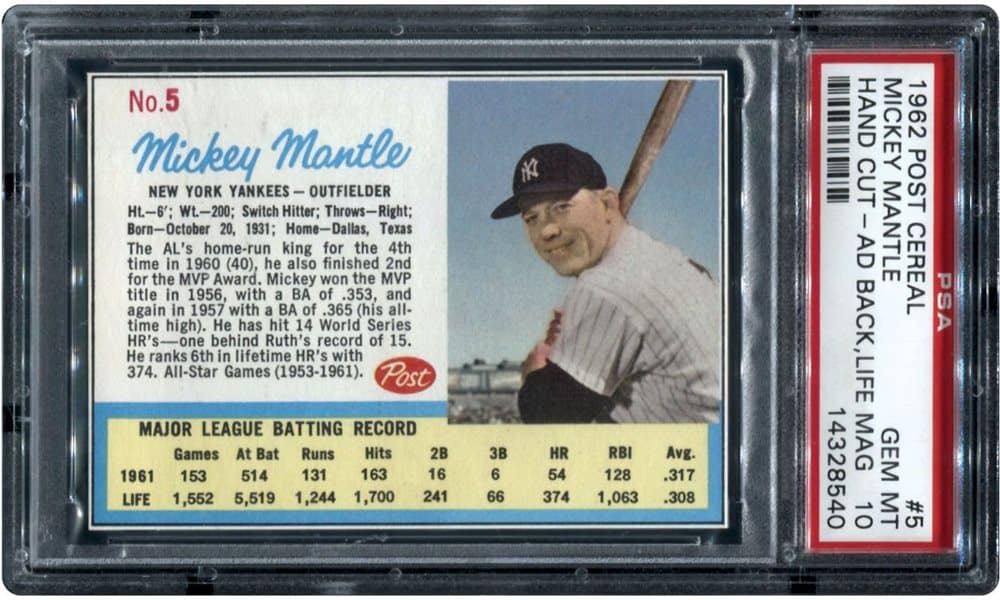 Mickey Mantle is arguably one of the best players in MLB history. In his 18-year-long career with New York Yankees, he played 2401 games and became a real icon, being inducted into the National Baseball Hall of Fame in 1974.

Mantle’s popularity was at its peak in the 1950s and 1960s when he was considered one of the best players in baseball, making his Post Cereal cards some of the most sought-after ever.

He remains a popular figure in the sport even today, more than 50 years after his retirement and 27 years after his death. Because of that, it should come as no surprise that his Post Cereal card is one of the most expensive ones ever sold from the 1962 set.

In the 2015 Sumer Break auction hosted by Memory Lane Inc. auction house, it sold for $1,552.31. It’s important to mention that the card was perfect with a PSA grade of 10. Sandy Koufax started his MLB career at just 19 years old and quickly became one of the most intriguing pitchers the league has seen. He pitched for the Dodgers for his entire 12-season long career and was inducted into the National Baseball Hall of Fame in 1972.

He’s the youngest athlete to be inducted into the Hall of Fame to this day, and this special fact made the PSA 9 Sandy Koufax #109 Post Cereal card from the 1962 set sell for $1,592 in October 2009 Auction hosted by Mile High Card Company. 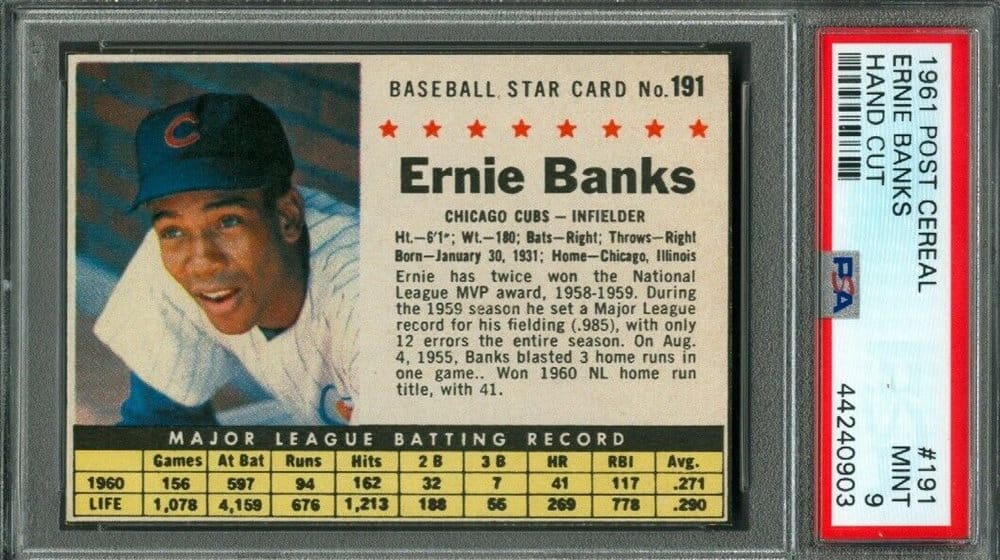 Ernie Banks was a shortstop and first baseman for the Chicago Cubs. He played his entire 21-season long career with the same team and won the National League Most Valuable Player award in the 1959 season. 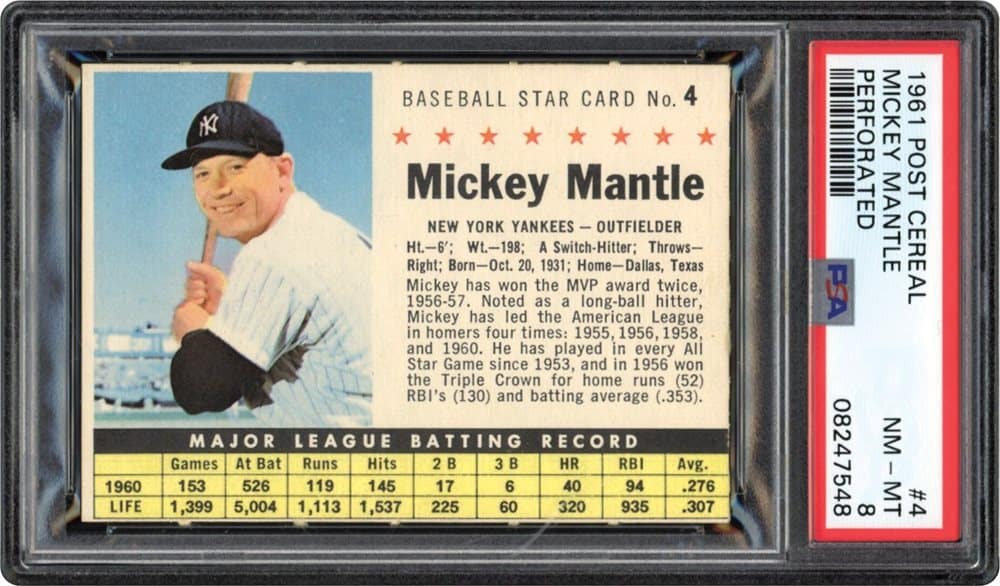 The second most expensive Post Cereal baseball card is also a Mickey Mantle card. This time from the 1961 set, the same year when Mantle led the league with 54 home runs. He also achieved 10.4 WAR, which was the best in the league.

Despite these amazing statistics, he lost the MVP race to his teammate Roger Maris by mere 4 points. However, Mickey didn’t get upset and led the New York Yankees to a 4-1 win over Cincinnati Reds in the World Series, and won his 6th ring. 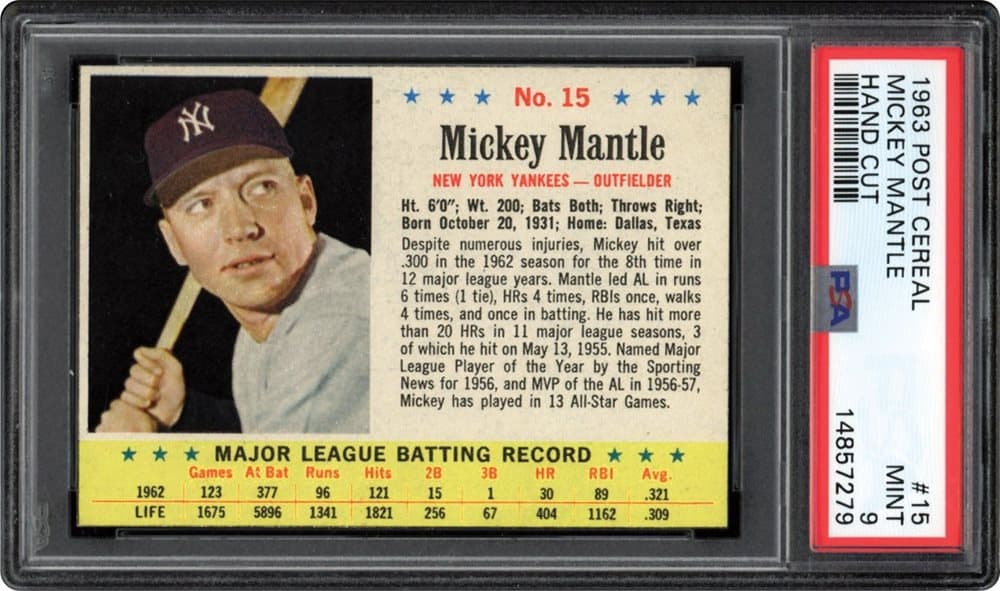 That’s right, the most expensive Post Cereal baseball card ever sold also carries Mickey Mantle’s name. Before talking about it, let’s celebrate the achievements of this legendary athlete.

Mantle won three American League Most Valuable Player awards and was a 16-time All-Star. He also holds numerous World Series records, including most home runs (18), most runs scored (42), and most total bases (123).

He was a switch-hitter, meaning he could bat with either hand, depending on the dominant hand of the opposing pitcher. It allowed him to hit 536 home runs in his career, which ranks him in the top 20 in Major League’s history.

Finally, Mickey’s offensive prowess is displayed by leading the league in offensive Wins Above Replacement (oWar) for 9 seasons in a row, from 1955 to 1964.

Knowing all this, it should come as no surprise, that Mickey Mantle #15 Post Cereal card is the most valuable ever, selling for $5,008.80 in Spring Rarities 2022 auction hosted by Memory Lane Inc.

However, it came from the 1963 set, which generally consists of cards that are much less valuable than their counterparts from earlier sets. Why this specific card sold for that much is unknown, and we can only speculate.