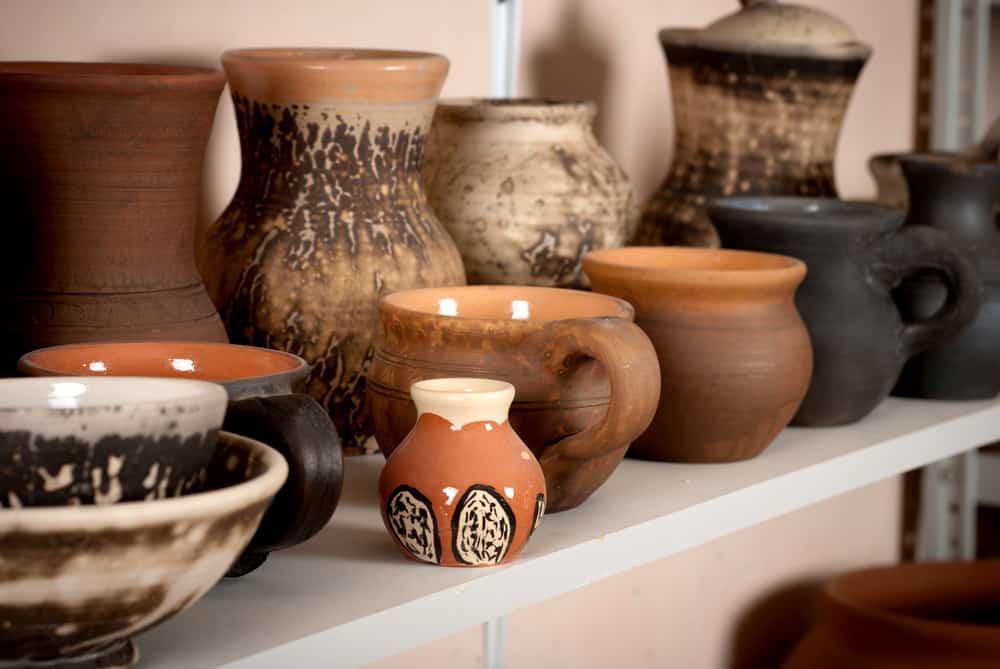 Welcome to the Pottery Marks Identification Guide. This guide is designed to not only provide you with a list of both antique and contemporary pottery and porcelain marks, but also help you understand the importance of pottery marks, recognize common and collectible pottery marks, and learn to identify markings in your own antique searches.

This guide also includes information on markings from the United States and from all around the world, so there is a wide variety.

If you’re hoping to better understand, identify, and evaluate your pottery, then read on!

When it comes to identifying your pottery, pottery markings are extremely important.

The name, initial, or symbol stamped or impressed into wet clay or painted onto dry clay can indicate a ton of information that will point you toward the value of your piece. Information such as the artist, company, country of origin, and sometimes the date of manufacture.

Pottery marks are a little like fingerprints; no two pottery companies will have the same exact markings. Therefore, if you know what to look for on a piece of pottery, you can narrow down its age and place of origin–which helps you determine its value!

Types of porcelain and pottery marks

To begin understanding the markings that adorn their pottery, first you must know that there are types of porcelain and pottery marks. They are the maker’s mark, the factory mark, and the pattern mark.

These are common types of pottery marks. They can most often be found on the bottom of the piece, or in some cases on the side or top.

They usually consist of a symbol or initials that indicate the potter who made the piece. If multiple workmen contributed to the piece, such as in a factory setting, then all of their markings will be on the piece, near to the factory’s mark.

Factory marks are used to indicate the country or city of origin, as well as the company that owned the factory. One of the most important things to remember about factory marks is that they can be very helpful in dating a piece of pottery. Often, the history of manufacturers is well documented.

Marks like these are usually found on the bottom of the piece.

These are the most difficult pottery marks to identify, as they can be anything from a simple design or number to a complex coat of arms. They were used by factories to indicate the pattern name or number.

Pattern marks are usually found on the bottom of the piece near the factory mark.

Now that you know a little bit more about pottery marks, let’s take a look at some common marks.

Rookwood Pottery was an American pottery company based in Cincinnati, Ohio. It was in business from 1880 to 1967 and was founded by potter Maria Longworth Storer.

She started the company at a time when women didn’t often own businesses. She had to fight the social norms and the criticism of her male peers as she paved the way for other female entrepreneurs in the pottery space.

The Rookwood Pottery mark consisted of a simple reverse “RP” within a flame. The mark was added to in 1901, when they included Roman numerals to date each piece. You could usually find this mark stamped or impressed onto the bottom of a piece of pottery.

Buffalo Pottery was an American pottery company based in Buffalo, New York. It was founded in 1902 by John Durrant Larkin (who also founded the successful Larkin Company, a soap manufacturer).

The company went strong until 1983, when it (now called Buffalo China) was acquired by Oneida Limited, then eventually sold again only to close in 2004. Oneida Limited does still own Buffalo China’s brand, which they use on a few of their dinnerware lines.

In its glory days, the Buffalo Pottery mark changed a few times, but it always included an American bison somewhere. Some of these marks also specify the identification of the clay type for the pottery piece, such as vitreous or non-vitreous. The Buffalo Pottery manufacturers mark was usually stamped on the bottom of a piece of pottery.

Van Briggle Pottery was an American pottery company based in Colorado Springs, Colorado. It began in 1901 by Artus Van Briggle and his wife, Anne. One of the greatest things Artus did was revive the ancient Chinese lost art of soft, marble-like glazes on his pieces.

Based in Flemington, New Jersey, Fulper Pottery began making pottery in 1909, and brought on ceramics engineer, Martin Stangl, in 1910. He then acquired the company in 1929, moved into specifical dinnerware in the mid-1930s, and then changed the name of the company to Stangl Pottery in 1955.

They used a surprisingly high number of glazes on their pottery–at least 100! The Fulper Pottery mark is a simple vertical rectangle around the name Fulper, written vertically, and it can be found stamped on the bottom of a piece of pottery.

Paul Revere Pottery was an important pottery company in America, based around Boston, Massachusetts. Female-run, this business began at the beginning of the 19th century as Saturday Evening Girls, a studio program that educated immigrant girls in the area. It grew into a successful pottery business and ran until 1942.

How to Identify Antique Pottery Marks

Lastly, if you seek help from a knowledgeable antique pottery expert, such as an antique dealer, or someone at an auction house, you’ll have a much better chance at identifying your piece of pottery correctly. This route will be more expensive but worth it if you want to be certain that your pottery’s evaluation is accurate.

All in all, porcelain and pottery marks are a great way to help identify your pottery pieces, whether it’s the maker’s mark, the factory mark, or the pattern mark. Of course, keep in mind that many companies used similar marks, so it is not always a foolproof method, but with a little further research of your own, you can generally find all the information you are looking for about your particular piece. With time and practice, you’ll be an expert at identifying pottery marks in no time!

Thank you for using this Pottery Marks Identification Guide. Let us know which is your favorite pottery mark in the comments below!