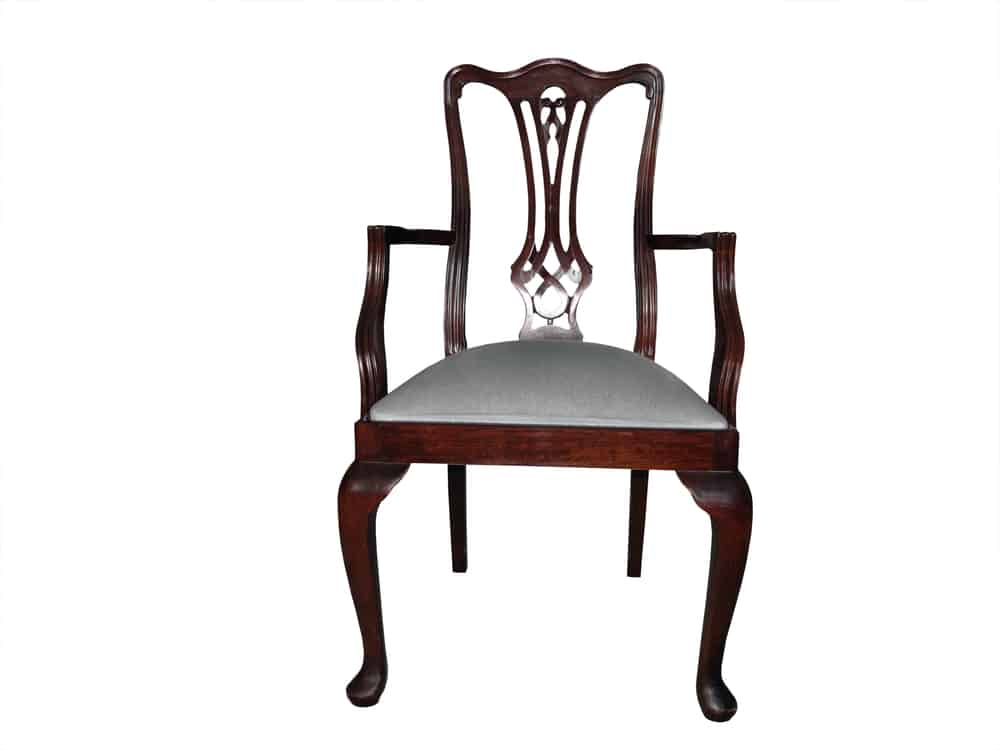 There are many antique furniture styles that were popular in their time but failed to pass the test of time and eventually fell into obscurity. However, the Queen Anne style is not one of them, and chairs of this style are popular among collectors and antique furniture fans to this day.

In this article, we’re going to introduce you to the world of antique Queen Anne chairs, explaining everything from history and key features to their value and reupholstering.

Queen Anne chairs are a type of chair that was popular in Europe and later the U.S in the early 18th century. The style of these chairs was named after Queen Anne of Great Britain, who ruled from 1702 to 1714.

It was a change from William and Mary style that was trending in the late 17th century, featuring intricate ornaments and decorations. Instead of pompous adornments, Queen Anne style was minimalistic and prioritized curves and lines that created light elegance.

While Queen Anne reigned for just over a decade, the style named after her was developed until the 1760s, becoming extremely popular in the U.S during the 1720s and 1730s, when many talented craftsmen from Britain migrated to colonies in the New World

How to Identify Queen Anne Chair?

There are several key characteristics of Queen Anne chairs that can help you identify them:

Probably the most noticeable stylistic feature of Queen Anne chairs is their legs. They’re S-shaped or cabriole, meaning they have two curves, the upper being convex, and the lower being concave.

Another characteristic of Queen Anne chairs is their club feet, sometimes called pad feet or Dutch feet. They are rounded flat feet at the end of the supporting legs of the chair.

Unlike the previous William and Mary style which featured intricate ornamentation, the Queen Anne style is very minimal. The only ornamentation you can find is shell, scallop, or scroll-shaped ornaments.

Oak was the choice before the Queen Anne style came into fashion. Most Queen Anne furniture, including the chairs, is made of walnut, but sometimes other woods like cherry, maple, or mahogany was also used.

The price of Queen Anne chairs varies drastically. You could buy a vintage Queen Anne chair for as little as $50, or pay close to $50,000. So, what influences its value?

The first and most obvious factor influencing the value of Queen Anne chairs is their age. Chairs that were made during the reign of Queen Anne in the 18th century are the most valuable.

On the other hand, chairs in the style of Queen Anne that were made in the 20th or 21st century are rarely worth much.

The second factor determining the price of Queen Anne chairs is condition. Chairs that are beautifully preserved and look new are always more expensive than their damaged counterparts.

Even slight damage can ruin the value of a rare chair, and major damage which requires expensive restoration work can make a valuable chair close to worthless.

A manufacturer’s reputation is also influencing the price of a chair. Some brands and makers are more respected than others, be it because of the materials used or the quality of the craftsmanship.

Some Queen Anne chairs were crafted by world-renowned chair-makers and their work is seen as works of art instead of mere pieces of furniture. Usually, such chairs were made in extremely limited numbers or were even one-offs.

Rare Queen Anne chairs are always the most valuable because of their scarce nature. You can’t simply buy such a chair whenever you buy and have to wait for someone to put it on an auction to even get the opportunity to buy it.

Finally, the history, background, and context of a chair are also important to its value. A chair that is connected to a famous historical figure or event is going to be much more valuable than exactly the same chair without such background.

Now we can take a look at some Queen Anne chairs that have been sold, so you can get an idea of how valuable such chairs can be: 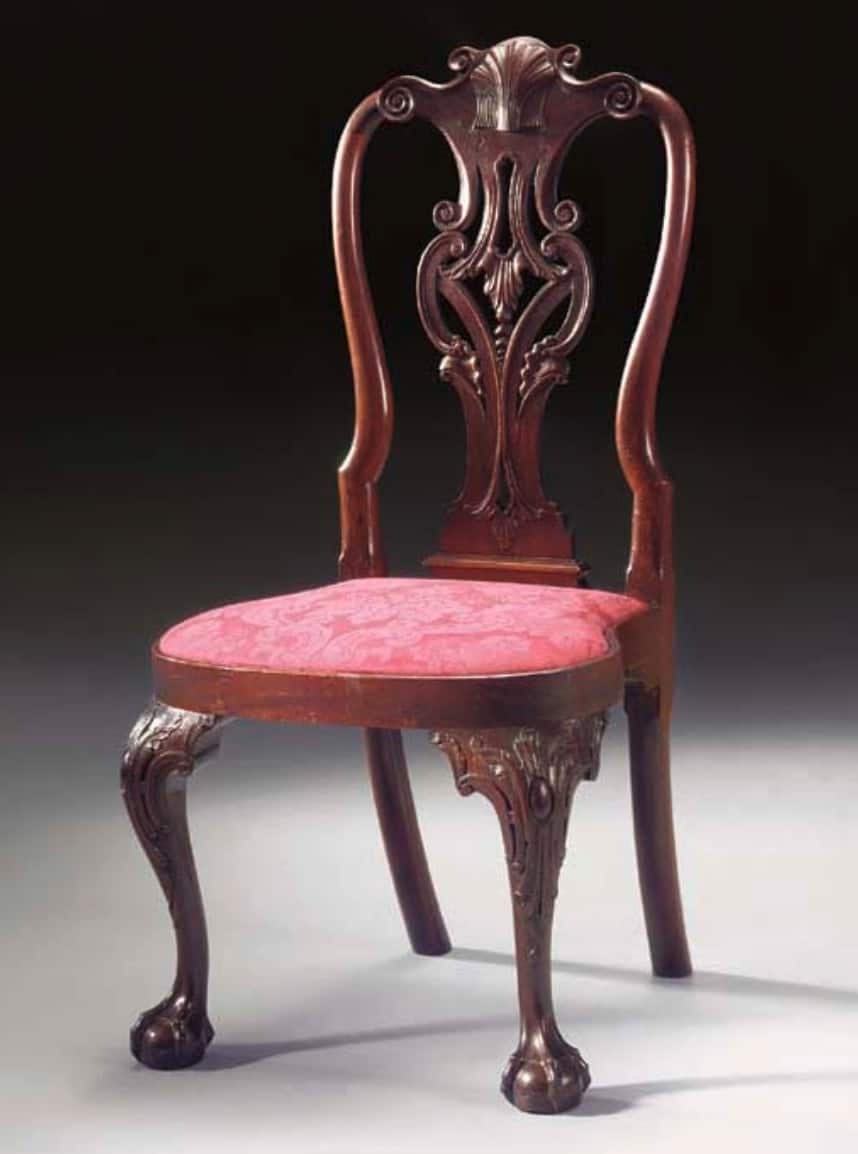 The chair is perfectly curved in its compass-shaped seat and cabriole legs that are adorned with carvings of leaf, foliate, and shell motifs. Most importantly, it was made by Garvan Carver, who was the most famous craftsman in 18th century Philadelphia.

Today, his work is displayed in art galleries in Europe and North America, proving the supreme craftsmanship of his carvings, including this chair that was auctioned off for $679,500 in 2003.

It’s another example of antique American Queen Anne chairs. This time it was a pair of chairs made by John Goddard sometime around 1765. He’s regarded as one of the best American craftsmen to this day, inspiring entire generations of colonial furniture makers.

These two 38 ¼-inch tall chairs were made of mahogany and featured minimal carvings, but the name behind them was enough to attract the winning bid of $170,500 in 2013. This 45-inch tall walnut chair was made sometime around 1740, in Virginia. That makes it one of the oldest Queen Anne-style chairs made outside Europe. Additionally, it’s upholstered in muslin and has horse hair and cotton padding.

Finally, its condition was listed as “excellent”, which is just a cherry on top of the cake. Even if you have the money it’s difficult to acquire a similar chair, and that’s why it sold for $20,000. 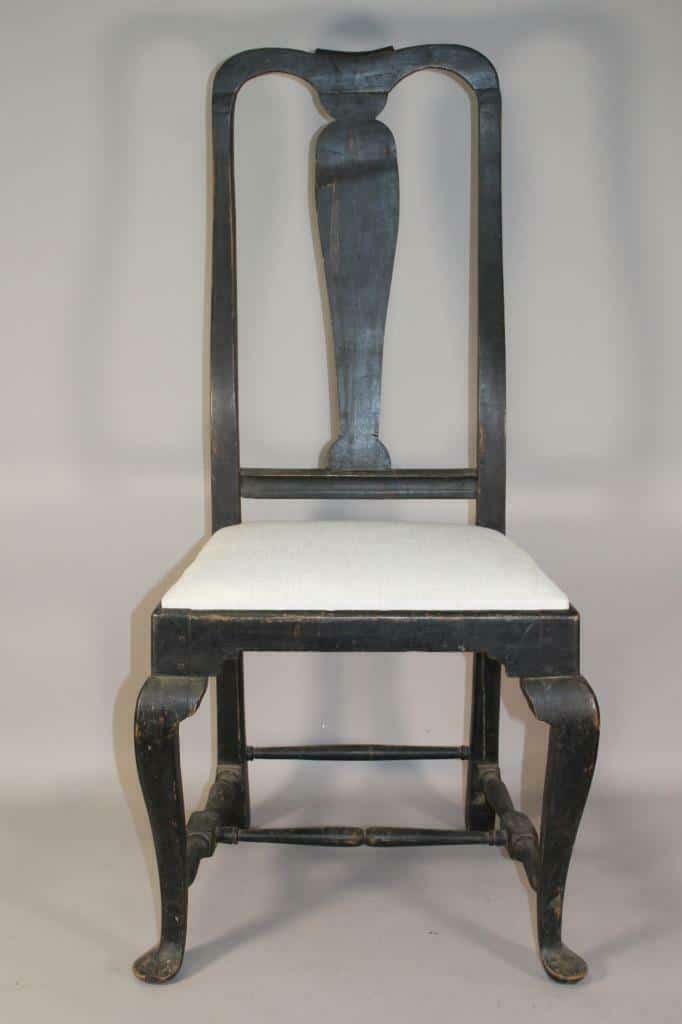 This 43-inch tall maple chair is described as “museum quality”, and is in great condition with no noticeable damage in its frame that’s still covered in original black paint. The upholstery was changed, but the materials aren’t mentioned.

It was made sometime between 1720 and 1740 somewhere in Connecticut, probably Norwich. It’s described as the perfect example of Queen Anne style in chairs, featuring beautiful curves.

Despite being one of the earliest examples of American Queen Anne chairs and being in great condition, it sold for just $1,026, showing that even very old chairs with historical significance can be somewhat affordable. 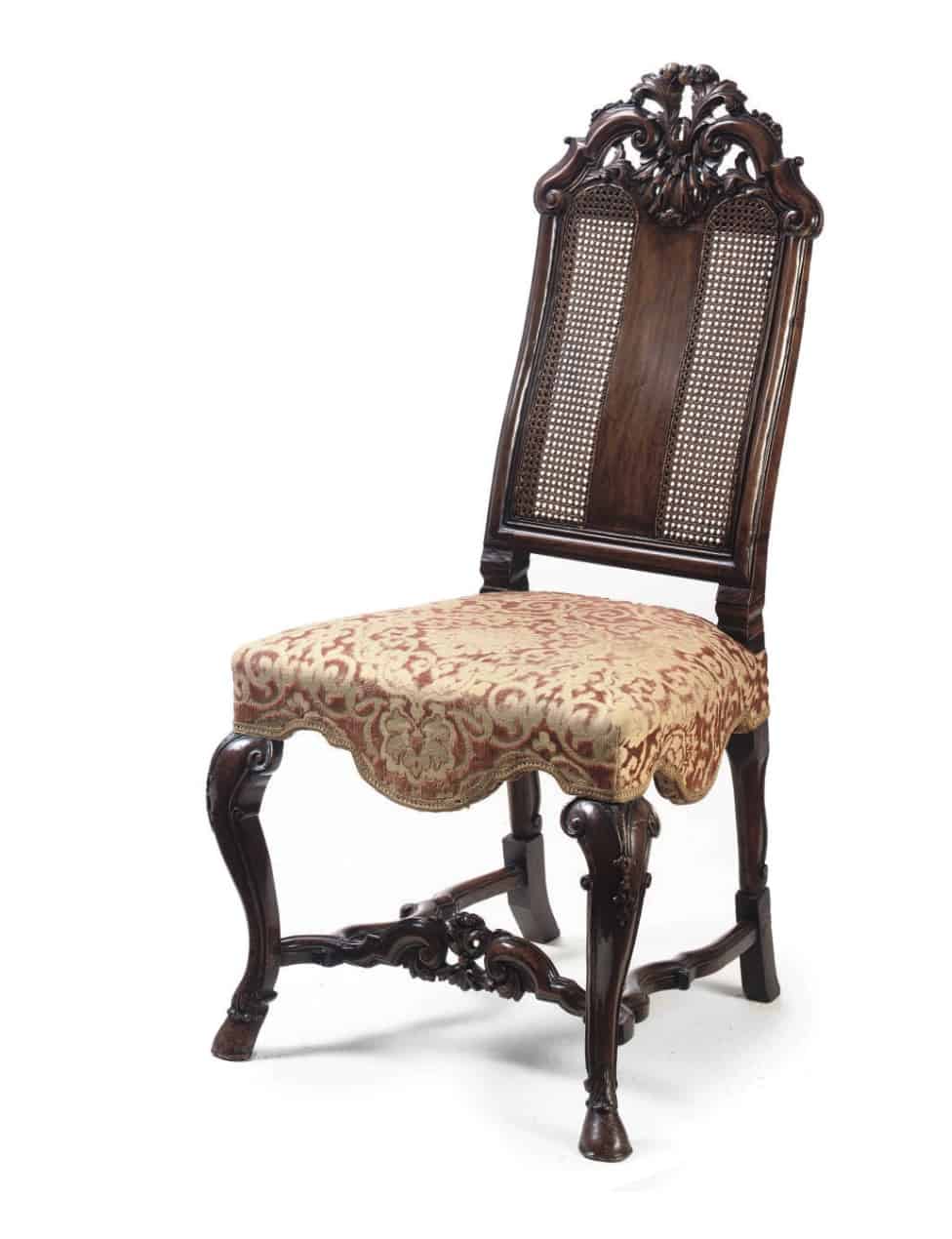 It’s a chair made sometime in the early 18th century, featuring all classical characteristics of the Queen Anne style, including cabriole legs, club feet, and minimal carvings.

This chair was reupholstered with a cream and red cut velvet seat, in addition to several repairs and replacements that lowered its value to just £500(≈$925) in 2008. 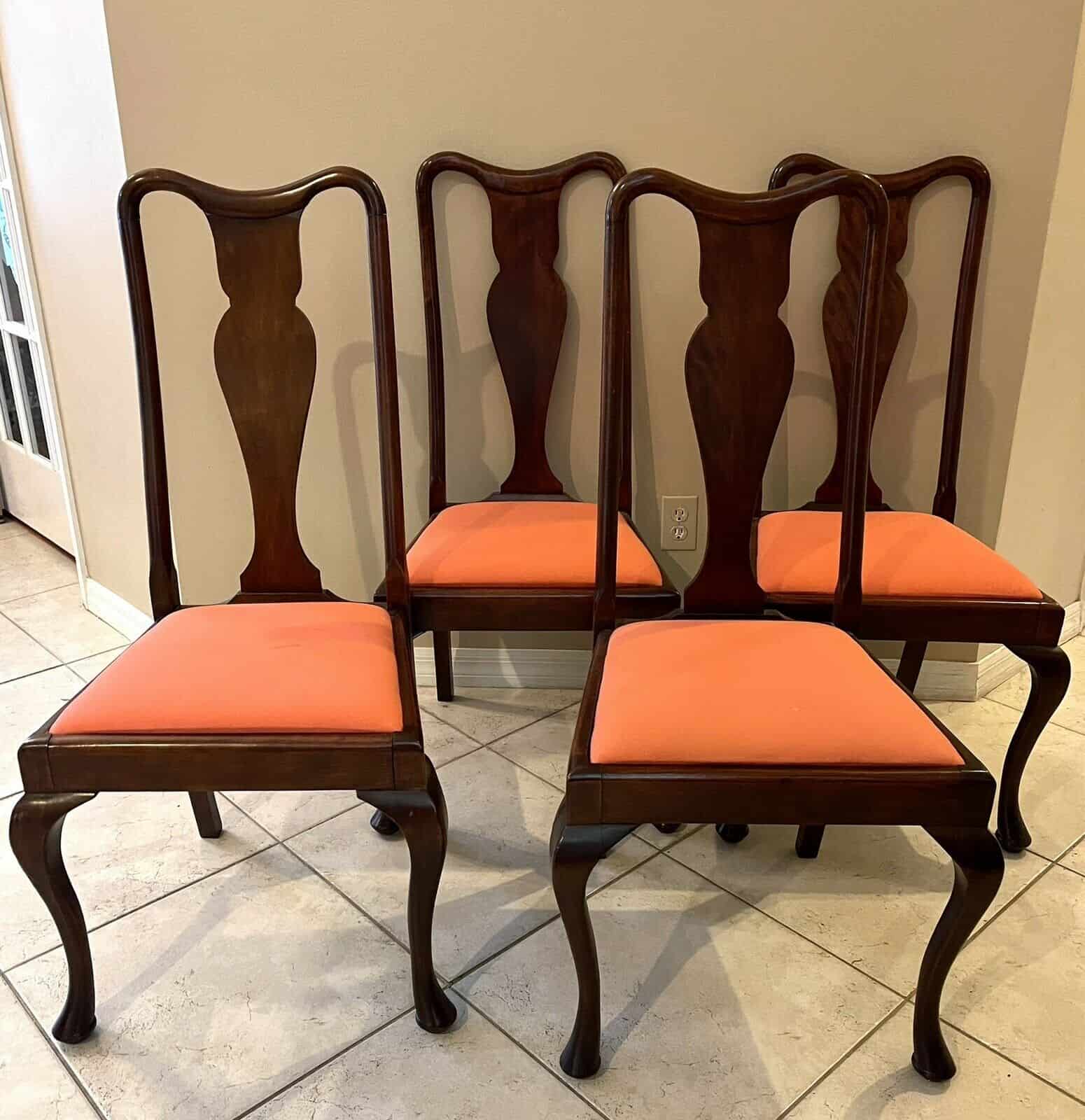 These chairs are 41.5-inch tall and were made somewhere between 1900 and 1919. Their condition isn’t great and has noticeable damage in scratches and dings. Additionally, the upholstery is slightly faded and has several stains.

That’s why a set of 4 sold for just $320, which comes to $80 a chair, showing that even antique Queen Anne chairs can be bought for cheap.

As you could see, Queen Anne chairs can be worth anything, from a price of a good dinner to a price of a luxury car. That’s why we always recommend getting advice from your local antique experts before selling or buying such a chair.

How to Reupholster Queen Anne Chair?

Even antique Queen Anne chairs often have frames in great condition. The same cannot be said about the upholstery, which is usually damaged through decades of wear and tear. If you want to reupholster a Queen Anne chair, you have to follow these general steps:

1. Remove the Old Fabric and Cushion from the Chair

We recommend using a flat-tip screwdriver to loosen the staples and then using pliers to remove them.

It’s best to iron the removed fabric before measuring its size. Then, buy at least 10% more material, as it will be easier to attach. You should buy even more if you plan on adding more cushioning to the chair.

3. Attach the New Fabric to the Chair Frame with Staples or Upholstery Tacks

Center the new fabric on the chair and start stapling it down to the frame, starting with one staple on each size, and then starting to fill in the gaps.

4. Remove Any Excess Fabric from Around the Edges of the Seat

Finally, cut off any additional fabric.

If you’re looking to add some vintage elegance to your home, Queen Anne furniture, including the chairs, might be one of the best choices you should consider. You can be sure that the timeless style will continue to be fashionable for decades to come.