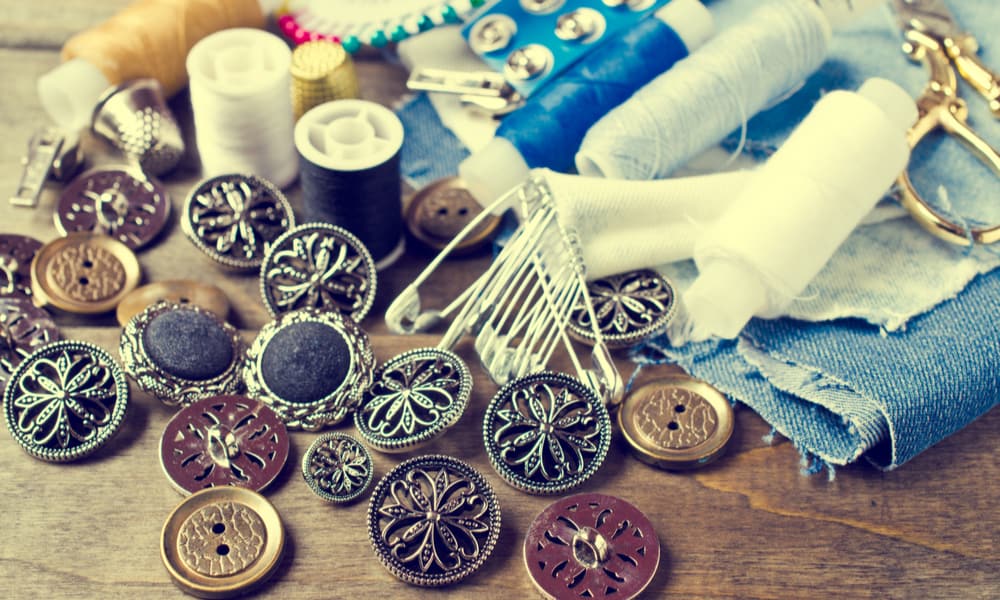 We collect buttons for different reasons.

I’m clumsy and lose mine a lot, so if I see one that looks familiar (or might match any of my clothes), I always pick it up. Kids might collect them for their pretty colors or patterns.

But some of us keep buttons as collectibles, or for commercial benefit as an antique traders. Let’s check out the most valuable antique buttons.

Most Valuable Antique Buttons Worth Money

Technically speaking, antiques are 100+ years old while vintage buttons were made 50 to 100 years ago. These categories sometimes overlap among amateur collectors, but if you’re targeting an expert, you need to be sure about the age of the item. And most are handmade.

Because these buttons were crafted manually, they had small errors. Metal buttons (or carved ones) might have mixed depths, while painted buttons may have color outside the borders of the shapes. Today, these errors authenticate your collectibles and raise their value.

You may think the most valuable antique buttons can’t be plastic. But older versions weren’t the same kind we see today. Old-school plastic includes celluloid, ivoroid, and casein plastic. These materials fuse organic matter (e.g. cellulose or milk protein) with some synthetic stuff.

The cellulose in celluloid buttons came from wood and cotton fibers. But metal buttons – particularly silver, gold, pewter, or brass, are more common because they don’t degrade as easily, so they’re still around. Other metal buttons had bits of painted or enameled copper.

You may have a button you think is celluloid, and that can be tricky. Why? The simplest test is to dip it in hot water. If it comes out smelling like mothballs or vapor rub, it could be celluloid. But water damages this material. Also, you need to be extra careful storing celluloid.

This substance releases gases and residue that can eventually erode the buttons, so they should never be stored in airtight dishes. If you do, the button will ‘eat itself’ down to nothing. You can clean the button with Simichrome polish or just use a slightly damp cloth.

You might hear a button described as Czech Glass. This is a kind of black glass made in Eastern Europe from 1918 to 1939. It originates in the region once known as Czechoslovakia and was intended to imitate the jet jewels Queen Victoria wore as she mourned her husband.

The term was pretty specific, but these days, Czech Glass is a generic category of colored glass. It mostly refers to vintage glass though. Porcelain is a similar material that was used in buttons. If you do a sound test, both ceramic and glass buttons emit a pleasing clink sound.

Bakelite was the first fully artificial plastic. It was invented by Leo Baekeland in 1904. During the 1920s, Bakelite buttons got quite popular, and they’re still among the most valuable antique buttons. You might see them listed as apple juice Bakelite or cream corn Bakelite.

This refers to their color. Some were originally clear or white and have slightly yellowed or gotten darker, hence apple juice. Others started out opaque and have lightened, so they’re designated cream corn. If you immerse it in hot water, Bakelite smells a lot like cod liver oil.

Pearls are a sought-after item for jewelry and trinkets. They’re harvested from clams, oysters, geoducks, and other mollusks. The inside of these animal shells has a thin layer of nacre called Mother of Pearl (MOP). It’s the same material as pearls, but thinner and lighter.

This is because the animal has to deposit multiple ‘coats’ of nacre around a ‘seed’ nucleus to form a pearl. But the shell lining is a single layer. It makes a good base material for buttons and low-end trinkets. And it’s highly conductive to heat, so it feels quite cold on your skin.

Certain buttons are labeled Bakelite but they’re actually Catalin. This company cashed in when the Bakelite patent expired (1927). They mimicked Bakelite technology but their buttons came in 15 extra colors. Luckily, you can easily verify both Bakelite and Catalin.

The hot-water test works, giving off a sickly sweet formaldehyde scent. But you’ll have to take the buttons out quickly to avoid damaging them! A safer test is to rub the button with a Q-tip dipped in Simichrome or cleaning fluid. Some yellowish coloring will transfer to the Q-tip.

When you’re hunting down the most valuable antique buttons, it helps to know what you’re looking for. This is important because here in the US, we sometimes say ‘button’ while referring to a brooch, pin, or badge. The kind with a message in front and a clasp at the back.

So if what you want is a button that goes in buttonholes, double-check the photos or videos in the listing. They should clearly show the back so you can see whether the button has a hole or hook that fastens it to the fabric. If it has a safety pin or a sharp metal rod, that’s a brooch.

Lucite is another old form of pure plastic (meaning it had no organic matter). It’s a trading name, just like Pyrex or Catalin. Lucite was specifically invented for buttons, and it was made of poly-acrylic resin. Lucite could be intricately carved and might be embedded with glitter.

The material was created by DuPont Plastics, and from the 1930s to the 1960s, buttons were crafted into flowers or animal shapes. You might find rhinestones and other bits of décor worked into the buttons. Lucite was also used to make affordable anti-allergenic jewelry.

Military buttons are such valuable collector’s items that it’s worth yanking them off uniforms in the thrift store bin. (But buy the fatigues first!) Some might have inscriptions with the year, troop, or rank of their owner. Others have symbols your company-mates can decipher.

This button has what appears to be a detailed relief portrait of a sailor in full ocean gear. But the description explains it’s a black depiction of Buster Brown – the comic strip, not the blues singer. The back of the button is marked with the patent year, which might be 1930.

The image on this button is hard to identify. It might be a bulldog or a pug, but it’s not clear. We do know it’s an ivoroid button though. Ivoroid was made of vegetable ivory that comes from corozo nuts. Their pulp looks a lot like animal ivory and is equally easy to carve.

Once ivory poaching became taboo, vegetable ivory filled the gap. The corozo nuts grow on a kind of palm tree called a Tagua tree. It’s lighter than animal ivory so it’s convenient for jewelry and trinkets. Showcased at a Paris expo in 1862, it spread widely from 1870-1920.

Buttons can be made of lots of materials including stone, fabric, wood, or the shells of sea creatures like shellfish and turtles. You can also find bone buttons made from antlers, horns, or skeletal mater. Mosaic buttons are often inlaid with a mixture of these organic materials.

You can get a good price for your buttons by selling a complete set. This lot has 5 brass buttons decorated with mosaic at the top. The image shows cozy landscapes and colorful homes framed in black and brass. These buttons are small – about 12.18mm in diameter.

At first glance, these look like wooden beads. But when you flip them over, you can see the loop shanks that connect the buttons to the fabric. So if you’re shopping online, eliminate listings without multiple pictures from various angles and different lighting conditions.

The buttons have unusual oblong shapes embellished with gilded patterns. But individual buttons aren’t as valuable, so consider seeking a matching set. These buttons look numerous because of how they’re photographed and strung together, but a set of four is quite sufficient.

Capitalism favors mass-produced items, and buttons are no different. Lots of plastic and metal ones were machine-molded and finished on conveyor belts. These are cheap so they flood the market. But while handmade buttons take longer to make, every button is unique.

It’s this one-of-kind quality that makes these buttons so valuable. You also have to consider the artist’s labor, time, and craftsmanship. These skills allow artisans to charge hundreds of dollars for their precious pieces. As antiques, that price sometimes goes into the thousands.

On this list, we’ve pointed out that early plastics had organic matter mixed in. That matters because pure synthetics (like celluloid) are hard to repair. Conversely, wood will decompose over time so you may not find as many antique timber buttons. But amber lasts a bit longer.

You may remember it from the Jurassic Park series. Or maybe from Fringe. This translucent orange material is essentially fossilized tree sap. It’s pretty and can be quite valuable. These buttons use low-grade amber, and they have some mildew flaws. But it’s still a cute set of 7.

Metal buttons routinely have maker’s marks and hallmarks. They might also be marked in grams or karats. It’s a useful feature because it allows you to date the piece and confirms who forged the piece. This set of buttons was designed as a mother-daughter pair from Paris.

The bulk of the buttons are brass, but the front design has four steel studs worked onto each button. They’re welded securely so they’re unlikely to pop out. These octagon-shaped buttons have a flowery crest framed in a square border with the intricate leaves and stem poking out.

The average person assumes gold is one of the most valuable materials in the world. But on its own, it’s too soft to be useful, so it’s often infused with other metals. Alternatively, gold flecks can be snuck into other items to raise their price and enhance their aesthetic appeal.

Apart from the sparkly karats mixed into the plastic, these Bakelite buttons have an unusual curved shape that holds your attention. And because they come as a complete set of three, the asking price is higher than typical plastic buttons. They were made as a limited edition.

Stereotypes suggest that men prefer plain décor while women want things fussy. But in the olden times, guys could be pretty dandy, especially in the royal courts. And even today, the queer spectrum leaves plenty of space for expression. Still, these buttons are more Spartan.

They’re not dull or drab, but they have a simple screw-head pattern that would appeal to anyone with minimalist tastes. And they’re shiny too! The buttons come in a set of seven marked with the name of their designer, the famed Mexican Silver expert William Spratling.

Nuts are a pretty versatile product. In the vegan world, they can replace dairy – vegan cheese is routinely made from blended cashews, pines, peanuts, and/or almonds. And for animal activists, corozo but ivoroid is a treasured alternative to the ivory from elephants and rhinos.

Of course, these nuts are biodegradable, so they won’t last nearly as long as animal-based ivory. But they’re lighter in weight and easier to carve. This allows you to express various motifs and add complex detail (like, say, a grand Scottish castle) that may not work on bone.

Do you have any advice on identifying valuable antique buttons? Tell us in the comments!

1 thought on “19 Most Valuable Antique Buttons Worth Money”