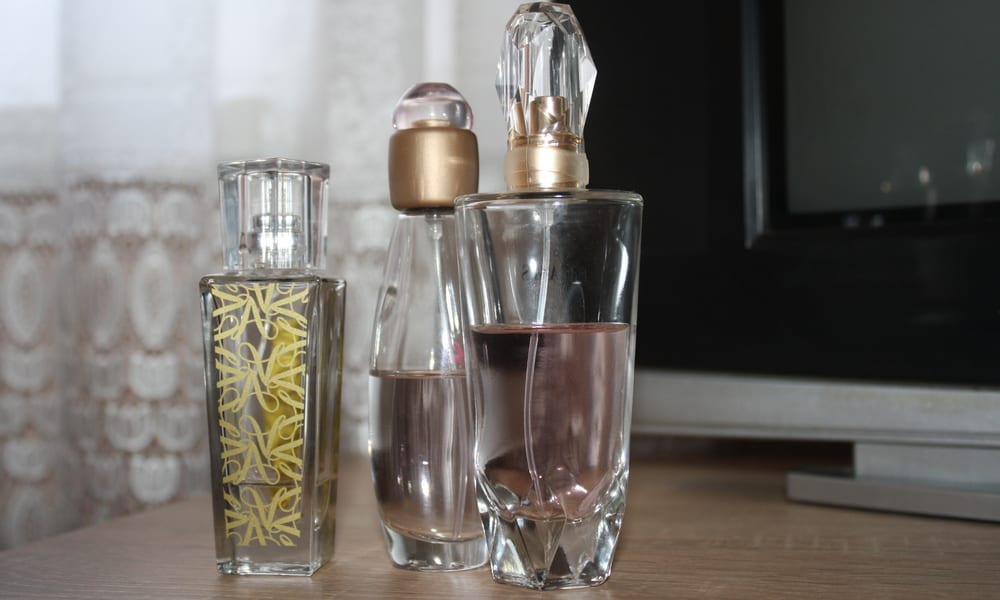 When you think of Avon today, the term MLM (multi-level marketing) springs to mind.

It was a concept promoted by David H. McConnell, a traveling salesman who peddled books around the country.

He made perfumes for fun, and when buyers wanted his bottles more than his books, he made the switch!

Let’s check out the most valuable Avon bottles he made.

David and his wife Lucy first went into the fragrance business in 1886. Then in 1892, they incorporated under the trade name California Perfume Company (CPC). They began with five signature scents and had added twenty more by 1896. Also, he used a female sales team.

The first-ever Avon Lady was Persis Foster Eames Albee, who went by PFE. This 50-year-old entrepreneur … ess … already owned a perfume store that she ran out of her house. So she used her shop as an official Regional CPC Depot and began training new female sales reps.

How did CPC become Avon? Well, David visited a landmark in the UK called Stratford Upon Avon. It’s where Shakespeare was born, and David was so entranced that he released a line of Avon branded items in 1929. In 1932, he filed Avon as his trademark. It still stands today.

David died in 1937, and by 1938, Avon Products was the name of the entire company, not just a select division. They sold perfumes, powder compacts, rouge, lipstick, toilet water, and other cosmetics. The company mass-produced bottles. Later, they made collectibles.

Logically speaking, the first five CPC scents should have the highest collectors’ value. These were Lily-of-the-Valley, White Rose, Hyacinth, Heliotrope, and Violet. Back then though, perfume bottles were cheap and functional, so it’s hard to find these original bottles intact.

But by the 60s, collectibles were a thing and Avon cashed in. They started releasing novelty bottles shaped like cats, dogs, and cars. These newer bottles directly targeted collectors, but serious fans prefer the earlier Unforgettable intaglio bottle or even the CPC Flowers bottles.

Two other top collectibles are the boot-shaped Leather bottle from 1966 and the roadster-shaped Sterling Six bottle from 1968. These were aimed at male customers. Leather was a cologne and Sterling Six was an aftershave. Usually, it’s women that buy scents for their men.

But these two sold so well that Avon continues making themed product bottles. They tried various shapes including boats, cars, and ships. They even made aromatic replicas of popular models like the VW Beetle, the Ford Edsel, and the Cord, as well as horses, ships, and trucks.

Outside this new masculine niche, Avon made perfume bottles shaped like household items, tools, appliances, candles, pipes, sports gear, and even weapons. But the animal-themed ones were the most popular. Some were detailed enough that you could recognize the breed.

A convenient resource for resellers is the Avon Collector’s Encyclopaedia published by Bud Hastin in 1969. He later launched the Avon Times newsletter and the National Association of Avon Collectors (NAAC). The first convention was in 1972 with its own special edition bottle.

This first NAAC bottle was sold at $10.95 and was exclusively for club members. Today, it’s a treasured find that has sold for up to $250. Based on its success, Bud continued working with Avon to create an official NAAC bottle every year until he retired as chairman in 1986.

While these branded bottles are cute and quirky, the glass was never high quality. So the most valuable Avon bottles are sold in their original boxes, undamaged and unopened. Figurines of PFE are also in high demand. Top reps receive these statues as a gift every year.

The most valuable Avon perfume bottles came in different glass grades. You had some in translucent colored glass, mostly green or cobalt blue. Then you had the darker glass pieces in black or red. Avon also made milk glass bottles in green and blue. These were opaque.

The pastel green glass is sometimes called jadeite while the same shade of blue is referred to as delphite. This delphite bottle is styled like a Greek vase with mythological characters. It has its original lid, so it can sell for the same price as two lidless ones from the same batch.

A lot of the time, you’ll use up a perfume and keep the bottle if it’s pretty. But with Avon and other collectibles, it has more value if it’s – as Dexter and Didi would say, NRFB, meaning Never Removed From Box. And that means the perfume is still inside its original packaging.

It’s been sealed since it left the factory, and it’s an alcohol-based perfume rather than a biodegradable, but its scent is barely valid. Still, collectors want it! So resellers will open the bottle, repack the perfume in little vials, and sell it separately. There’s a trading idea for you!

A lot of people keep perfume bottles just because they’re pretty. And because Avon focused on beauty and eye-grabbing features when they designed their bottles, a lot of them are still around. Some collectors want powder bottles or lotion bottles as well as cologne containers.

An Avon fanboy or fangirl will buy a bottle of bath wash or rouge if it’s NMB (near mint, no box). Also, while you can re-sell scents, any soaps or lotions are probably rancid. That said, this is a plastic lotion bottle, so while Unforgettable is a classic, this one is unlikely to sell.

Typically, scented liquids retain their aroma for a year or two. The industry suggests you buy a new bottle every 18 months or so. But the industry also packages perfumes in tiny bottles with large atomizers (the spray thingie at the top) so you’ll use it all up within a few months.

So while collectors do buy the cologne inside those vintage Avon bottles, it won’t smell as fresh or last as long. The perfume will likely dissipate within half an hour of use. Still, what the customer wants, the customer gets, so invest in some pretty vials and enjoy those sales!

While you can resell minuscule amounts of certain Avon perfumes, it helps to know the base. Scents with a woodsy undertone last longer than fruity or floral ones, so that’s an idea. And since male-oriented scents tend to be musky, they might offer higher potency for reselling.

You can spot the masculine Avon batches by their bottles. These colognes and aftershaves were packed in bottles shaped like cars, trains, trucks, ships, or shoes. You might also find a lion, smoking pipe, motorcycle, gun, or something less gendered like a clock, jukebox, or radio.

Are you one of those people who buy items based on their packaging? A lot of us are! It’s why Avon made so many cute bottles in so many different shapes and styles. They knew we’d want them all! This strategy got even more targeted once they got into formal collectibles.

But their product volume is part of the problem. Yes, Avon perfume bottles are aesthetically attractive. They come in attention-grabbing colors that look gorgeous on display, even after the perfume is finished. But this volume hurts their re-sell value because they’re everywhere!

People look up eBay listings for two main reasons. One, you might be a reseller at a garage sale or thrift store and you want to know what the item is worth before you buy it. Or two, you found an old piece from your grandma’s things and you think it might be valuable.

In both these cases, it’s important to test for accuracy. Don’t just look at the asking price and get excited. Glance at current bids to see if there’s any interest. Confirm the date, because some of those hundred-dollar bottles have sat unsold for ages. Finally, check where it ships from.

The above suggestions are helpful when you’re listing an item. If you don’t verify what buyers are willing to pay, you may overspend on a ‘collectible’ that just sits in your warehouse while its pictures float online. The surest way to know the value of your item is to have it appraised.

But professional evaluation and grading can be pricy. For pieces under $100, it’s tough to justify the cost. Your next best option is to check the ‘sold’ listings on whichever platform you’re using. This shows items that are paid for and are in transit to their new collectors.

If you happen to be scouring your grandparents’ attic for goodies, cars are a good place to start. Model cars with clockwork motors sell well. Actually, all forms of miniature vehicles will do, including model trains, cars, and planes. But what if you don’t know about cars?

With Avon bottles, you don’t have to know the make or model. Just zero in on transport-themed bottles. You can sell them in batches to improve the price. You can bundle your cars with sports bottles and other guy-friendly themes. Wild animals and canons will do nicely.

While female collectors might be attracted to the cute kitties and poodles, men are more likely to enjoy a fishing trophy like the blue marlin bottle. Or the judge’s gavel. Or even the rubber stamp. Other ideas for male collectors include Avon beer stein bottles and auto tools.

Of course, gender is a social construct, so you’re free to buy what you like. That said, when you’re targeting a niche category of collectors, it helps to customize your lot in ways that appeal to the buyer. This is how appraisers and professional dealers do their private sales.

Here’s another fun sales tip. You can shift your lot from the $2 range to the $200 one by combining a rare bottle with many common ones. Unforgettable and Little Dot were some of CPCs earliest offerings before the brand – and the company – re-emerged as Avon Products.

But if you’ve looked around, you’ll see how low they’re priced. Possibly because these are reproductions in milk glass and plastic, not the original intaglio crystal. Bundle a Little Dot or Unforgettable with a bunch of others that sell for a dollar or two. It’s smarter marketing.

Do you have tips about the most valuable Avon bottles? Share them in the comments section!

8 thoughts on “17 Most Valuable Vintage Avon Bottles Worth Money”