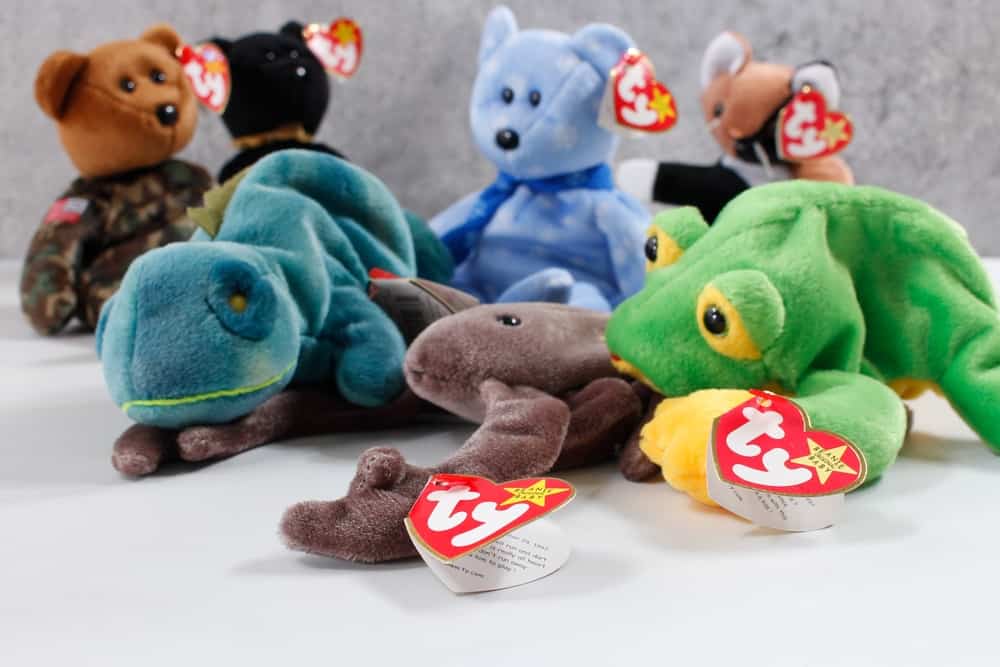 The casual observer assumes that all beanie babies are colored teddy bears. But it turns out lots of other stuffed animals are represented within the brand, ranging from cows to crabs! But how can you identify the most valuable beanie babies? This list is a good place to start…

Most Valuable Beanie Babies Worth Money

At launch, beanie babies only cost $5 a piece. But with strategic techniques and clever marketing, their inventor Ty Warner turned these cheap toys into collectibles. Today, many are worth thousands of dollars, but others barely hit a hundred. The bears are the priciest.

Batty is one of the most valuable beanie babies. The wings have Velcro so he can curl them around his body or leave them spread. Many listings say 1996, so watch out for that. He was retired in 1999, which raised his value as a collectible. The pinkish bat is near mint condition.

When you’re scouting for profitable beanie babies, it helps to look at sold listings instead of seller listings. This is because the seller can ask for any price, but that doesn’t count unless someone is willing to pay. But if it’s already sold, then you can’t exactly buy it so there’s that.

Halo comes in multiple versions and generations. This one is a brown-nosed edition, and that’s important because they fetch higher prices than black-nosed models. And this item has PE pellets instead of longer-lasting PVC pellets. Some collectors have a preference, so check.

Understanding the date system on beanie babies can be tricky. Some came with birthdays on their tags because they make a great gift. But release date and birth year aren’t always the same. Of course, the earlier beanie babies – like Lizzy the lizard – didn’t have birthdays.

Beanie dealers have a few suggestions on why Lizzy is so valuable. Ty Warner would sometimes retire beanies that weren’t selling so that the scarcity could drive demand and push sales. Lizzy was only sold for 6 months. The tactic has paid in spades for rare collectors!

Anyone who knows anything about beanie babies knows about Princess Di. This cute purple bear was made in limited numbers to mark her passing. Some have sold for large amounts, but that depends on a lot of factors. If you have the wrong one, it may be worthless.

Initially, roughly 200 Princess Di beanies were released, and they didn’t have birthdays. So a lot of the ones in the market may be fakes. Before you invest in one, have a trusted appraiser confirm it’s one of the rare and authentic originals, not just a cuddly copy barely worth $5.

Some beanie babies were marketed as part of a collection. So if you own the complete set, you can get a much higher price. One example of this is the bunnies – Hippity, Hoppity, and Floppity. Each has a distinct color, so you can identify them instantly. This here is Hippity.

Stuffed animals are usually filled with soft, plush polyester, but beanie babies have plastic ‘beans’ or pellets inside them. So as part of assessing the value of your piece, check whether it can still sit upright or whether it slumps over. This shows you the condition of its innards.

Beanie babies were initially marketed to kids. The idea was they could pay for their stuffed animals using cash from their allowance. Many of the characters had a poem that described their personality. And like many kids’ items, adults cottoned on to their collector’s value.

Claude is an especially popular piece. His poem describes him as a painter who ended up with his art supplies all over him. His shape and color are appealing on a visual and tactile level – those claws are made for cuddling and his legs offer so many anchors for tiny hands.

One way to ensure your items will sell is to peg them onto a significant date. So beanie babies connected to historical or cultural events do well. The Valentines’ beanies are a particularly smart choice because they make the perfect gift for your lady (or gentleman) love to keep.

You might see sellers saying the date on the tush tag has an error because it’s not the same as the one on the swing tag. But as we mentioned earlier, that’s because the release date is often separate from the beanie’s birthday. Either way, this magenta teddy is still a big hit.

If you’re new to beanie baby trading, you’ve probably heard that errors can make the piece more valuable. But that really depends on what the typo is. Some mistakes are common, like spelling Oak Brook (Illinois) as a single word. Or spacing. Or adding an extra ‘i’ to ‘original’.

With Peace bears, each tie-die toy had a different shading pattern, which may seem like a flaw. But these make the bears unique and can drive up the price. Here, a bigger bear and a smaller one are sold as a set so they’re listed higher. The larger ones were aimed at collectors.

Still on the subject of errors, you shouldn’t over-rely on them as a valuation tool. Consider other factors like creases, condition, and pellet type. You could also gauge the political significance of the toy. Leftie the Donkey and Righty the Elephant sell big in election years.

This piece falls into that category. It’s a patriotic bear bedazzled with stars and stripes. The pellets in it are PE, not PVC. The latter is better quality, so unless the bear is in a collector’s box, it won’t hold up as well. But this specimen is in mint condition so the value is verified.

Unicorns, mermaids, and centaurs are mythical creatures that draw the admiration and curiosity of the average human. So it makes sense that the unicorn is one of the most valuable beanie babies. The company made multiple variants, and each one is coveted.

Beyond confirming what generation your Mystic is in, you need to assess her condition. Creases and folds could lower your asking price. And as a white toy, if it was ever handled, it may have smudges. Typos aside, top-notch collectible beanies must be spotless and pristine.

Some beanie babies are rare enough to fetch top prices. And in the 90s, you could easily get half a million dollars for a Princes Di beanie baby. But remember, the collectors’ market has slowed. So while sellers ask for this kind of price, they’re unlikely to find a viable buyer.

That said, if you do have beanies, they might come back into vogue eventually. Maybe. Just keep in mind that if you’re selling, few people are willing to pay $100 for a stuffed toy. And even expert appraisers and pawn shops are shying away from buying these beanie babies…

How now brown cow? Well … not really. This cow is red, he’s actually a bull, and he’s one of the most valuable beanie babies. He’s one of the earlier lots and spends all day on his belly. But let’s talk about the typos on this tag. Unfortunately, they’re among the most common ones.

For future reference, if the name is misspelled, that’s valuable. But the top mistakes e.g. ‘suface’ instead of ‘surface’ or using the wrong address are normal and will not affect the price point. That said, Snort is profitable and sells almost as consistently as Princess Di.

If you’re a first-time seller, you’ve probably watched a lot of tutorials. So you might think any beanie baby typo raises its price. But as we keep saying, it’s specific errors that shoot up the value of your stuffed toy. This one, for example, is among the first nine beanies ever made.

This particular Pinchers is the newer re-release of the Original Nine BBOC. But if you find one that says Punchers instead of Pinchers on the tag, that’s a typo people will pay good money for. But the more common mistakes like punctuation and spacing are worthless.

When the Original Nine were issued as part of the Beanie Babies Official Club Collection (BBOC), they finally got name tags with birthdays. The earlier sets from the 90s didn’t have birthdays listed on their swing tags. Those older ones are the most valuable beanie babies.

But for old-school collectors, traditional bears like this one here are a huge hit. Fuzzy and Curly are particularly valuable. You could identify them by their stereotypical teddy bear color, that pale brown, and by the distinct texture of their fur, though Fuzzy is far thicker.

You can reasonably hike the price of beanies with their name typed wrong. Other name errors that could be valuable include Tuck (the Walrus) instead of Tusk or Spook (the ghost) instead of Spooky. Misspelled cities (e.g. Gosport instead of Gasport) won’t change the price.

Also, you can get a better price if you time your sale effectively. Prince Di bears sell well around the anniversary of her passing. Patriotic and/or political ones gain traction during election cycles. Gobbles is a thanksgiving cash cow. Hippity and the rest sell well over Easter.

As Americans, we think of squirrels and raccoons as ordinary creatures. But we once heard about an Australian tourist who was itching to see a raccoon in person! To him, kangaroos and koalas are normal, but our ‘trash pandas’ were such a peculiarity. He’d have loved Nuts.

The bushy tail is a nice, tactile feature for kids to play with. But since this one is a collector’s item, it was kept in a manner that protected its quality. It’s a new one, probably straight out of the box. And it’s filled with PE pellets so it will need to be preserved to keep it upright.

Another clever way to position your beanie babies is to classify them. You could sell a batch of farm animals, zoo animals, reptiles, etc. The mythological beanies are among the most valuable beanie babies. They include Fleece the Lamb, a reference to The Golden Fleece.

Similar characters are Mystic the Unicorn (who we checked out earlier), Scorch, and Magic, who are both dragons. Among the Beanie Boos series – with big puppy-dog eyes – you can find another Magic, but this one is a unicorn. They also made striped unicorn cats and sloths.

Do you have any tips on finding the most valuable beanie babies? Tell us in the comments!

1 thought on “17 Most Valuable Beanie Babies Worth Money”