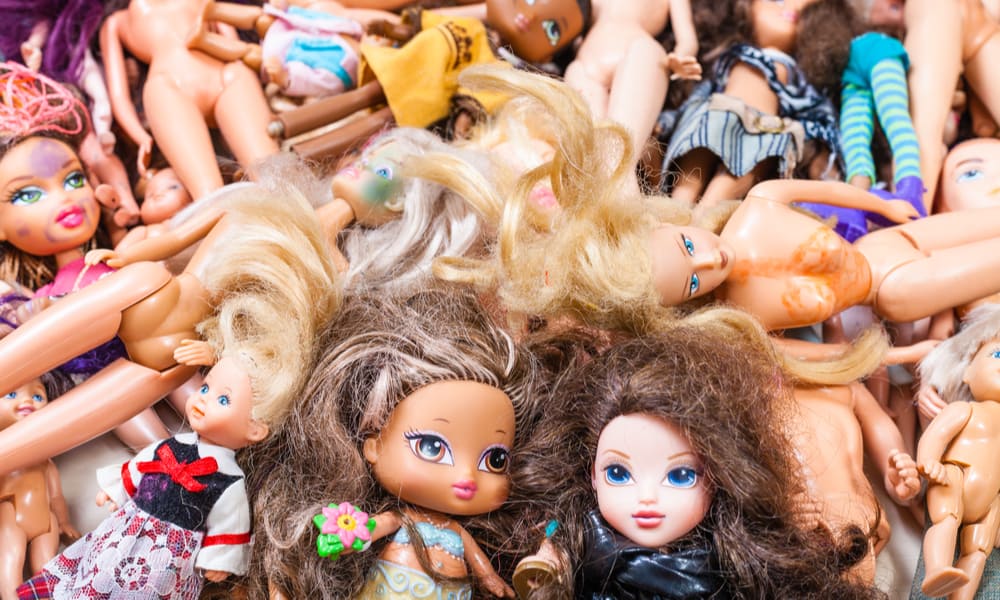 Bratz dolls made their debut back in 2001. At first, there were just four dolls – but by 2005, the Bratz empire had expanded to a range of spin-offs, a TV series and a film. And global sales across all merchandise reached an incredible $2 billion that year.

Today, rare Bratz dolls can be very valuable. But which ones should you look out for – and just how much might they be worth?

That’s what we’re about to find out! So step this way, and learn more about the rare Bratz dolls collectors love …

Felicia is generally considered to be the rarest of the Pajama Party series of Bratz dolls. So a doll in good condition is catnip for collectors!

We found one boxed example in pristine condition for which the seller was asking $2,200. In the event, they were prepared to accept a lower offer. Another specimen, again in its original box and in perfect condition, apparently sold online for $2,400.

But it’s important to treat some of these sale figures with caution. Unscrupulous sellers have been known to set up dummy accounts, “selling” their dolls to themselves at inflated prices.

When they then put the doll on the market for a second time, collectors can be fooled by the model’s sales history. And that can tempt them into paying higher prices.

With that in mind, it’s interesting to note that the Felicia doll sold for $2,400 was the only item ever sold by that seller. And it received only a single bid.

So while it’s undoubtedly a rare doll, that price tag should be taken with a pinch of salt.

Sierrna was another Bratz doll in the Pajama Party line. She came dressed in a spangly micro miniskirt and spotted top. And included in the package was a spare set of underwear, a pair of shoes – and a lip gloss for the owner. The box also included a Big Fish, Lil Fish card game.

The doll itself stands 9 inches tall. And as is the case with all Bratz dolls, examples in unopened boxes are the most prized by collectors.

Sierrna isn’t as rare as Felicia. But if you want a perfect example, you’ll still need to spend big money.

We found one in her original box, with all the accessories present and correct, for sale online. The box had apparently never been opened. And the asking price was $800. 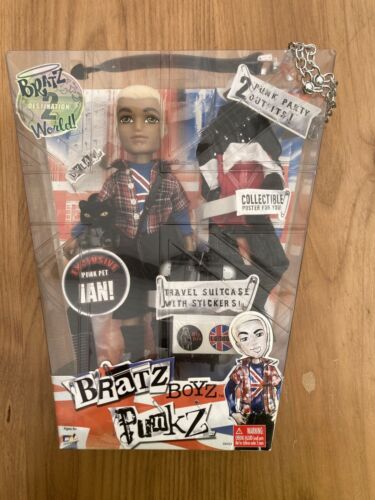 Today, examples in good condition and in their original boxes are highly sought after by collectors. And Dylan, with his peroxide blonde hair, black shorts and plaid shirt, is particularly prized.

The package contained a spare outfit, stickers and a poster. Dylan even came with his very own punk pet, a black cat named Ian. And where girls’ dolls were accompanied by female-friendly children’s accessories like lip gloss, Dylan came with a comb.

A Dylan in an unopened box, complete with all accessories and with the packaging in great condition, came to auction in 2022. He attracted seven bids, selling for $2,025.

Also Read  14 Most Valuable Antique Cameos in Jewelry Worth Money 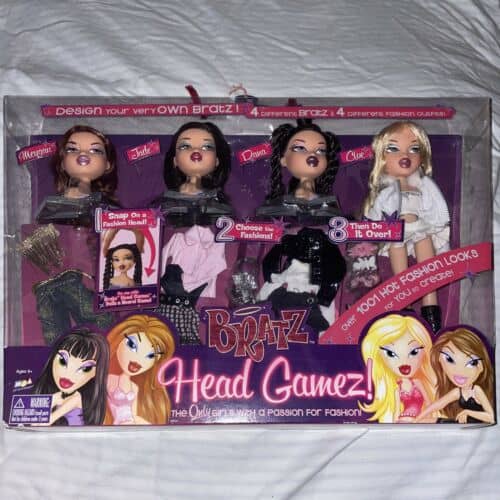 Meygan, Jade, Dana and Cloe were the four dolls who formed the Head Gamez set. It was launched by Bratz in 2005. But these weren’t dolls in the traditional sense. Instead they were four heads and shoulders, intended to be used alongside a Head Gamez board game.

The heads were designed to snap onto separate bodies. And they came with a huge variety of different outfits. The idea was that children could create their very own unique Bratz.

An unopened version of the set came up for sale online in 2022. The box had some minor damage on the reverse. But it nevertheless sold for $1,175. 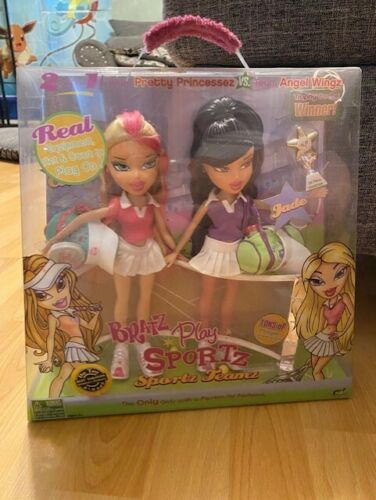 This set from the Sportz Teamz series features two dolls in tennis outfits, Cloe and Jade.

As befits the brand image, both wear small, tight tops and itsy bitsy skirts. It’s perhaps not surprising that the American Psychological Association raised concerns about the sexualized images of girls portrayed by Bratz.

Set that aside – if you can – and the set was undeniably a hit with children. And today, good quality examples in their original boxes can fetch surprisingly high sums.

One set in its box, complete with both dolls and all their accessories, was sold online in 2022. There was only one bidder, but they were prepared to pay $1,000 to add it to their collection. 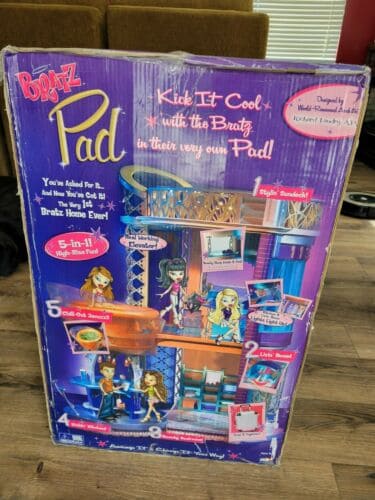 Dolls with a “passion for fashion” couldn’t live in just any old house. So it was that Bratz launched the “Bratz Pad” in 2004.

It featured a working elevator, jacuzzi, living room with rotating couch and a “kickin’ kitchen”. There was also a “beauty bedroom” and a “stylin’ sun deck”, all illuminated by working lights.

Tracking down a specimen in good condition these days isn’t easy. We found one that was offered for sale online in 2022. It was complete, but the box was very battered.

That didn’t put off one buyer, though, who paid $1,000 to secure it. And as the set was pretty heavy – about 50 pounds – they’ll have paid a whole lot more to get it delivered. 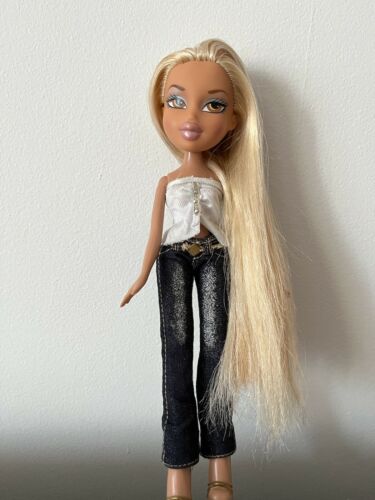 One of Bratz’s areas of focus was what the brand referred to as “hair play”.

Magic Hair Raya was launched in 2007, and was a new model to join the four original Bratz Girlz. She was white, with long blonde hair, and wore glittery jeans and a strapless white top. And she was produced exclusively for the retail giant Wal-Mart.

She’s a rare find for collectors, and even examples in less than perfect condition can fetch big money. We found one doll that had been sold via an online auction platform in 2022. She had been separated from her box and had some wear to her face.

On the plus side, she was still wearing her original outfit, and came with her “magic hairbrush”. She was snapped up by one collector for $800. 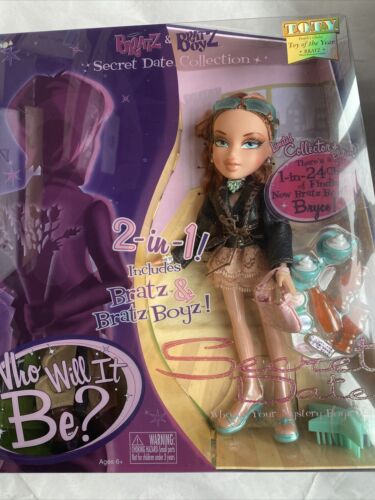 Bratz’s Secret Date collection was the subject of some controversy. A fathers’ group claimed that the dolls’ marketing encouraged girls to sneak out without their parents’ knowledge. The collection’s name was later changed to Blind Date in response.

Each box contained two dolls. The female doll was clearly visible, but her male “date” was hidden behind opaque cardboard. A window showed his feet, the only clue to his identity.

The Bryce doll was particularly sought after, as he was included in only 1 in 24 boxes. So this example, containing Meygan and Bryce, is particularly exciting for collectors.

It was offered for sale online in 2022. The seller maintained that the box had never been opened and that Bryce was identifiable by the tan trousers he wore. At the time of writing, it’s still available for a buyer prepared to spend $900. 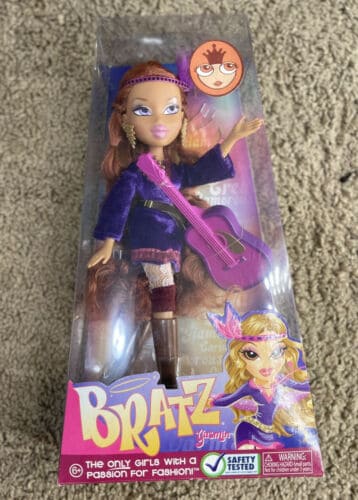 Yasmin was a hippie chick – but being a Bratz doll, she did it in style! She was one of the original Bratz line-up, and was originally called “Lupe”.

She wore a feathered headdress and a purple dress, and carried a coordinating acoustic guitar. “Yasmin,” the packaging states, “makes being an Earth girl look glamorous”.

As one of the first dolls produced, she’s very collectable. And when a Yasmin in her original box came up for auction in 2022, collectors went wild. The lot received 20 bids, finally selling for $760. 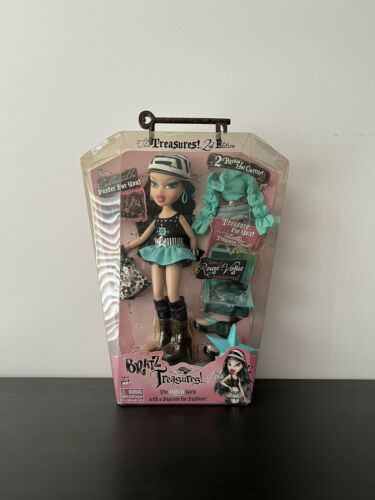 Jade was one of the dolls that starred in the second edition of the Bratz Treasures series. She came complete with two outfits, plus a chest containing a treasure trove of accessories. And there was also a poster to adorn the wall of the proud owner’s bedroom.

Other dolls featured in the collection were Cloe, Yasmin and Sasha. And there was a “Scorchin’ Sea Scooter” available to buy separately to complete the set.

One example of the Jade doll, complete with original box and all accessories, came up for sale online in 2022. She was offered at a fixed price of $650 – and it wasn’t long before she was snapped up.

Note, though, that prices can fluctuate dramatically. A month earlier, another example – in its original box and also in great condition – sold at auction for $100 less. 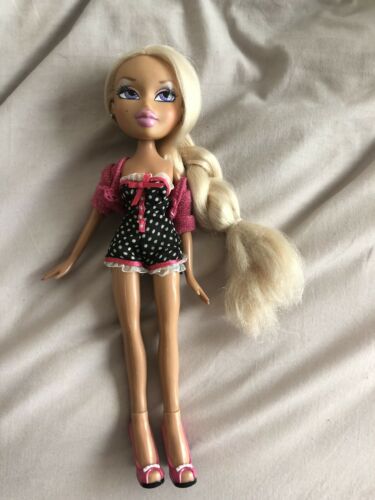 Dresden was a doll from Bratz’s fifth edition of “Passion 4 Fashion”. She is known by the nickname “Miss Priss” because she is always beautifully groomed.

She has long blonde hair, blue eyes and lightly tanned skin. And she comes dressed in black leggings and a strapless red tulle top. A second outfit features a strapless polka dot playsuit with lace and ribbon trim and barely-there shorts.

These days, she’s hard to find – so when examples come up for sale, they’re snapped up by collectors. One doll wearing her second outfit – minus the original red lace-topped stockings – was offered for auction in March 2022.

Aside from her missing outfit and box, her hair had also been trimmed. But that didn’t matter to collectors. 55 bids were received before she was sold for $640. 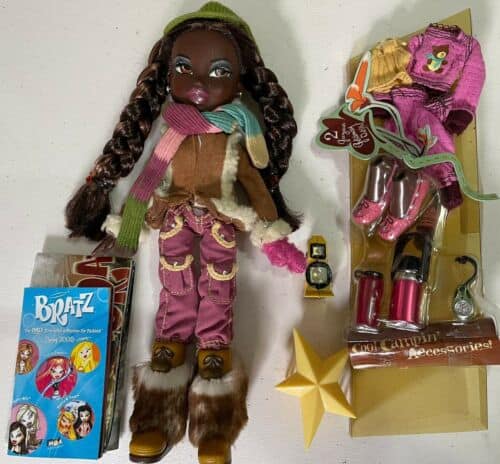 Campfire Felicia was launched in 2005. She had a unique dark brown skin tone, hair with auburn streaks, and brown eyes. And for once, this was a Bratz doll that wore trousers, long sleeves, and a high neckline.

The reason, of course, was that Felicia was going camping. She’d certainly keep warm in her purple combats, furry boots and long, striped scarf. Also in the package were camping accessories, including an insulated flask and torch.

An example of Campfire Felicia came up for sale online in 2022. The doll was in good condition, with her accessories in a blister pack. But one of her gloves had been lost and there was no box. That didn’t stop one collector buying her for $550. 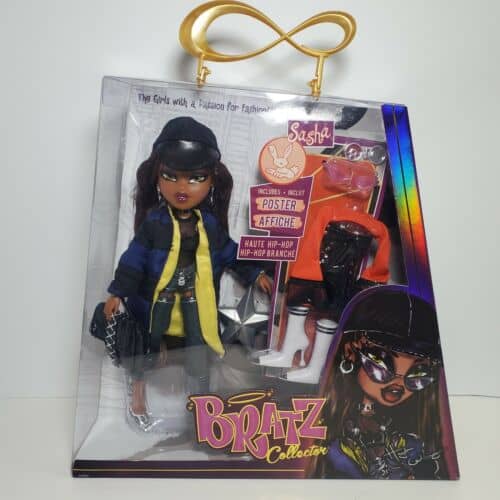 It’s not just vintage Bratz that are valuable. In more recent years, collectors’ edition dolls have been released in limited numbers. And even dolls that are brand new or just a few years old can be worth big money on the secondary market.

That’s the case for hip hop artist Sasha. She came complete with a change of outfit, a poster and a silver star.

An example in pristine condition, with the box still sealed, was sold online in 2022. The price for this three-year-old plastic doll? $550. 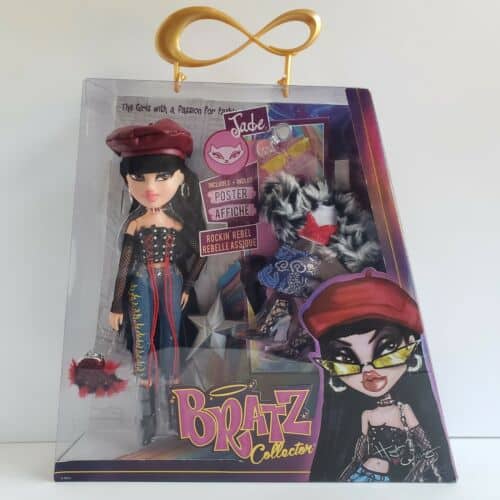 Jade was another doll released as a collectors’ edition in 2018. She wore an outfit of skin-tight embroidered jeans, a black bustier and black fishnet sleeves. And like Sasha, she came in a package with a spare outfit, poster and silver star.

An example of Jade was also offered for sale in 2022. Bought as an investment, she had never been removed from her box. All her accessories were therefore present and correct. And the box looked as fresh as the day it came off the factory line.

She was evidently slightly less of a draw than Sasha, but still sold for $525. 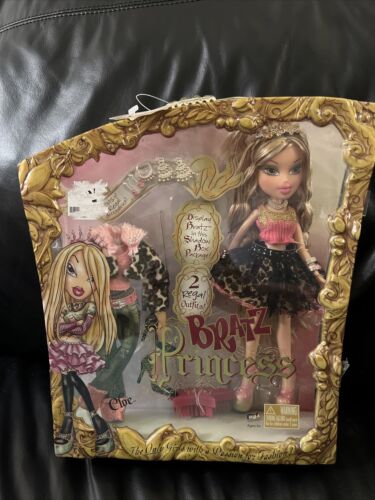 The Princess line of Bratz was released in 2006. Each doll in the range came with two different outfits.

For Cloe, outfit number 1 featured a pink glittery tank top and an animal print skirt. Outfit 2 included jeans, pumps and a bolero jacket. Accessories were fit for royalty – a tiara and plenty of jewelry.

By this point, savvy collectors were picking up dolls to keep as an investment. And Bratz made boxes that would allow them to be displayed without ever having to be removed from their packaging.

This Princess Cloe doll came up for sale in 2022. She was complete in her original, factory-sealed box. But 16 years on, some of the plastic ties had disintegrated, and the brush had come loose.

She nevertheless achieved a price of $550.

That brings us to the end of our look at the rare Bratz dolls getting collectors hot under the collar! The brand has been the subject of plenty of controversy in its time. But that’s perhaps part of what’s created its devoted following.

Vintage Bratz in less than perfect condition can still be picked up at a modest price. But a rare doll in pristine shape is likely to cost you considerably more. And even new, limited-edition dolls that have never been out of their box can sell for hundreds of dollars.

Whether you’re searching for or selling a Bratz doll, we hope you’ve enjoyed learning more about them!