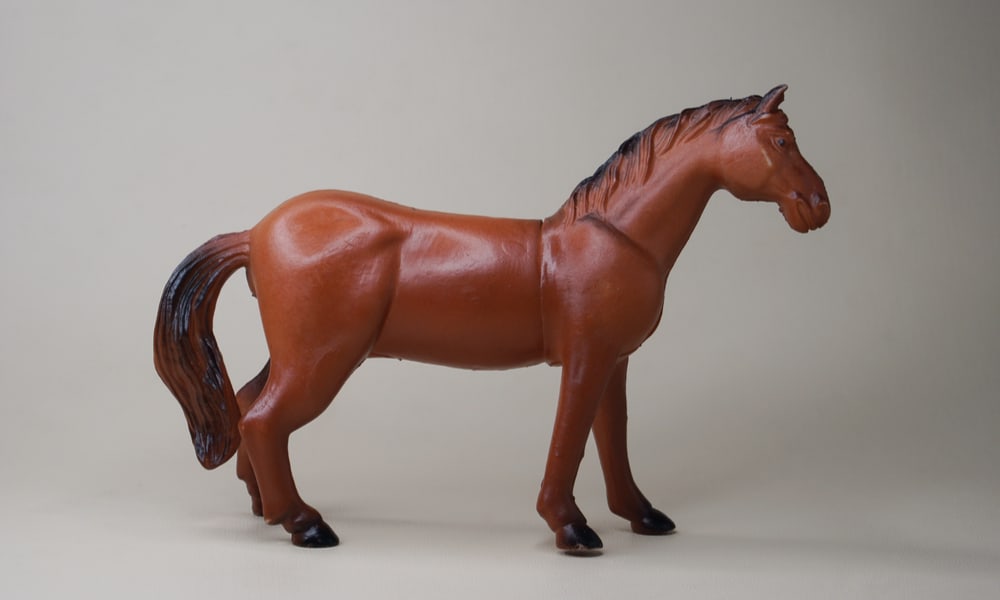 When it comes to modern day collectibles, Breyer horses have one of the largest fan bases out there. First created in 1950, these beautifully molded plastic horses are still going strong today. And they can command some seriously impressive prices.

So what makes a Breyer horse collectible? Let’s find out, as we take a look at 18 of the most valuable vintage Breyer horses of recent years. 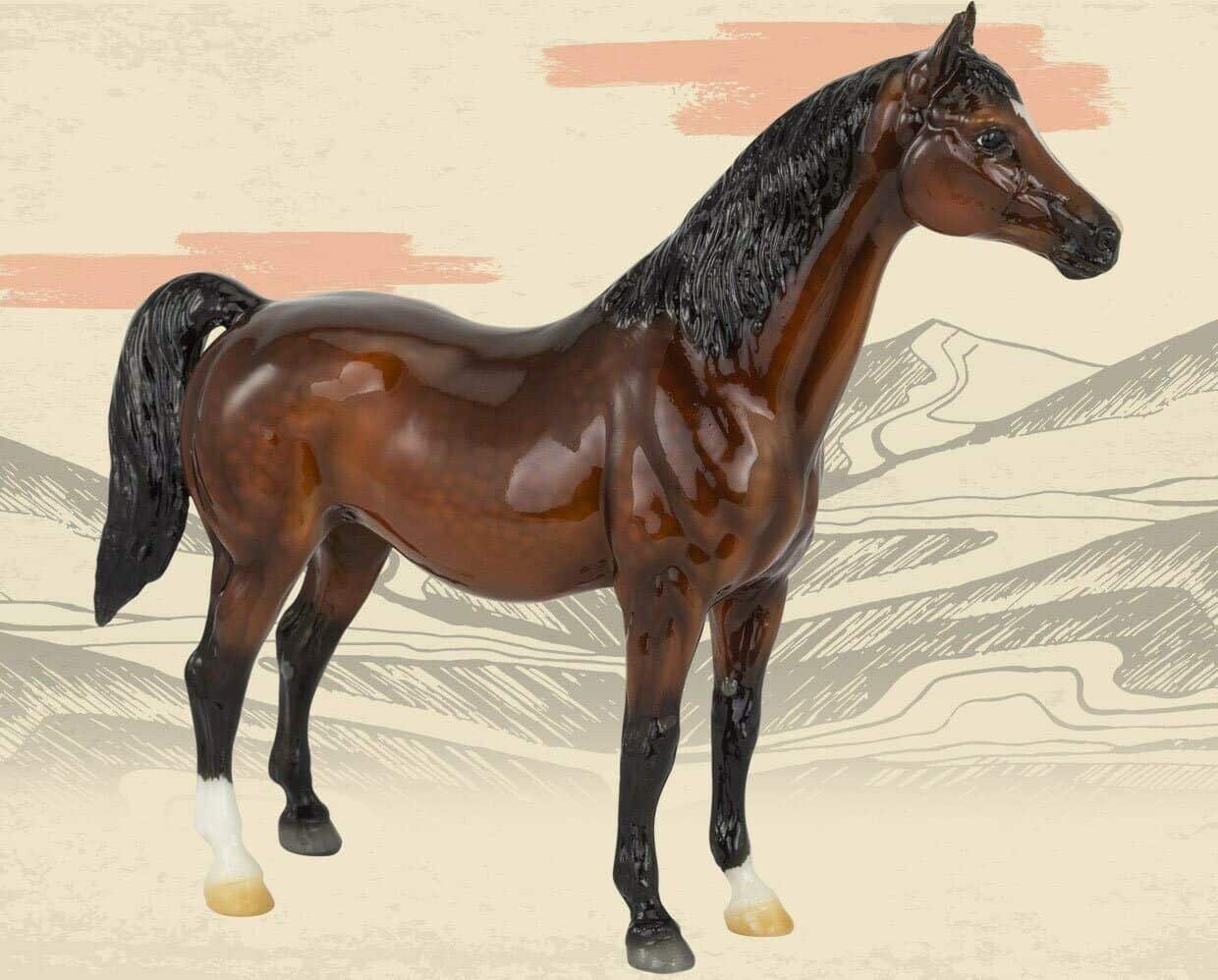 The In-Between Mare gets its name because it was sculpted between Breyer’s Proud Arabian Mare and the Family Arabian Mare.

It was sculpted in the late 1950s, when Breyer felt it was time to replace the Proud Arabian Mare model. The sculptor, Chris Hess, started work, and steel molds were made of his model. But the new horse was eventually rejected in favor of another design by Hess, the Family Arabian Mare.

The In-Betweener was never officially released, although it seems that a handful were produced. About a dozen have come to light over the years in three different colors – Glossy Alabaster, Woodgrain and Glossy Grey Appaloosa.

For 50 years, the molds for the In-Between Mare gathered dust. But that wasn’t the end of the story.

In 2020, Breyer used them to produce 500 new models for their Vintage Collectors Club. They appeared in the same three colors as the originals. And they could be distinguished from the Proud and Family Arabian Mares by their S-shaped tails.

Since then, a few of these 2020 models have been sold on, achieving prices of between $400 and $700. But if you were to get your hands on an original 1950s version? Well, who knows – but you’d certainly be looking at well into four figures. 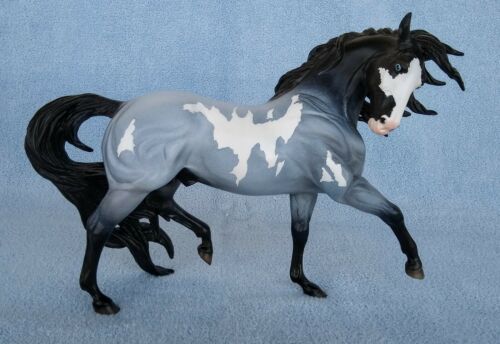 This model was produced in 2013, so he doesn’t really fit the definition of vintage. But he’s nevertheless highly collectible. That’s because he’s from a production run of just 230 models.

He’s in excellent condition – what collectors refer to as “factory mint”. In other words, he looks just as he did when he first came off the production line.

He’s called “Poseidon”, and he’s the second model in Beyer’s Greek God Series. His unusual sea-blue coat and long flowing mane and tail mark him out as something special. His belly carries a stamp reading “Limited Edition 2013”.

He was sold via an online auction in 2022 and made $1,225. But price varies considerably depending on condition. Another model came up for sale two months later, but bearing some scuffs. It made $500. 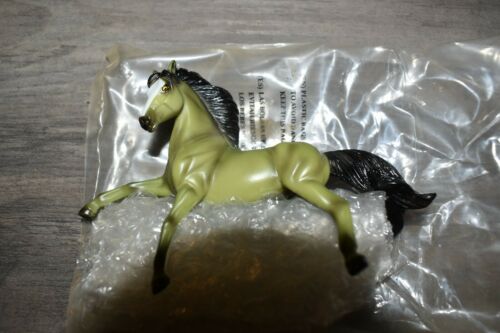 Breyer make some highly unusual models – and here’s one of them! Frankenstang is a Frankenstein’s monster of a mustang, finished in green and with bolts through its neck.

21 were made as table centerpieces for a Halloween Velvet Rope Event in 2008 – a special event open to Beyer horse collectors. They were raffled to lucky winners on the evening. Another 200 models were made in miniature for all the guests to take home.

The smaller versions appear on the secondary market from time to time and usually sell for around $260. But they can make considerably more. This one, still in its original packaging, came up for auction in 2022. It sold for $1,260. 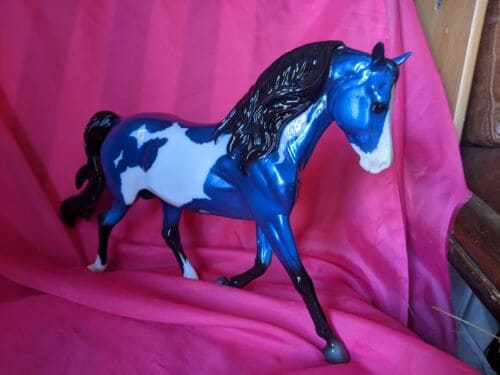 Okay, this model really isn’t vintage at all – but he’s still highly collectible!

He was produced for the 2021 Breyerfest, an annual three-day gathering of Breyer enthusiasts. It’s just like a traditional horse fair only with model horses!

This model, “Ansel”, is a pearlized blue pinto with a gloss finish. He was made to the traditional Breyer scale of 1:9 and the model number is 711475. He was created from a Morgan mold, number 807, and was sculpted by Kylee Parks.

Ansel is a Premier Collection model and only 200 were made.

This one was in good condition, with only tiny manufacturing flaws – pinpoint dots, a couple of tiny paint bubbles and an area of overspray. He came up for sale in an online auction in 2022, with the winning bidder paying $1,338. 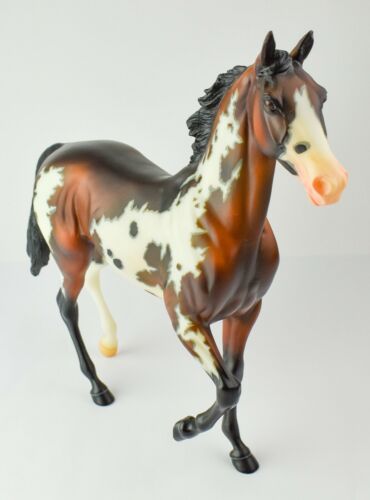 Mosaic is another limited edition model, produced in 2001. It was made using a mold crafted the previous year, a portrait of the legendary steeplechase horse Lonesome Glory. The sculptor was Kitty Cantrell, and the mold number is 572.

The horse is a bay pinto, and he;s one of a limited edition of 350 made for Breyer’s Connoisseur Series. This particular model, sold online in 2022, is number 333. It weighed 12 ounces, and was the traditional size for a Breyer horse, measuring 11 by 9.75 by 2.5 inches. 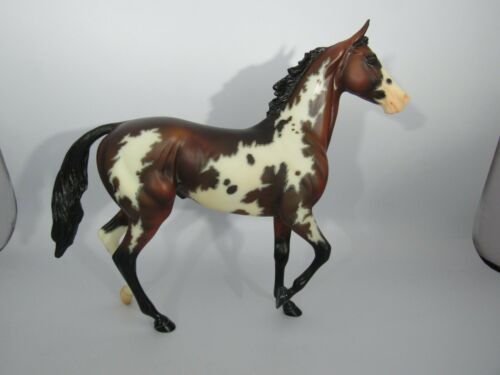 Next on our list is another example of Breyer’s Mosaic, modelled on Lonesome Glory. It was sold online at around the same time as the previous specimen, but fetched around $150 more.

This model was sold for a set price, rather than being auctioned. It was in very good order, with just a few minor flaws in the paintwork. And importantly, this horse came with his own Certificate of Authenticity. For some collectors, that’s worth paying a premium.

Each model is numbered with its individual number on one of its hooves. This example was number 347 of 350. 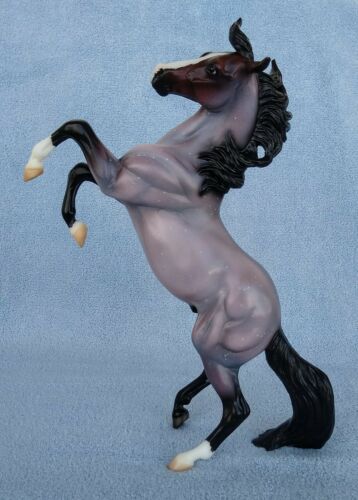 This 2011 horse is another that was produced in strictly limited quantities. The production run was just 137 models. They were crafted for the silver anniversary of Breyerfest and were given to the volunteers who worked at the fair.

The horse is called “Nottingham”, and he was in factory mint condition when he was sold at an online auction in 2022. Other examples of this model have sold elsewhere for around $600. But this one showed the value attached to mint condition, achieving a sale price of $1,575. 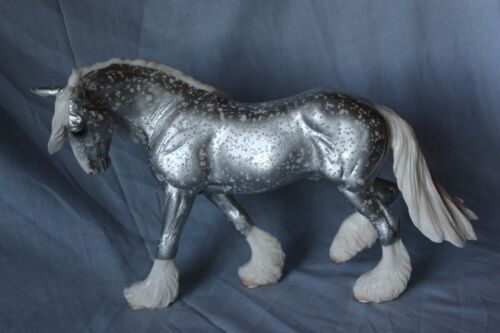 Silver Snow is another limited edition horse. 200 of this model were made as a “web special” in December 2008. Web specials are models made available to members of Breyer’s Collectors Clubs, and they can only be purchased online.

This particular horse had been kept as a display piece since his purchase. As such, he was in great condition when he was put on the market in 2022. His new owner paid the princely sum of $1,800. 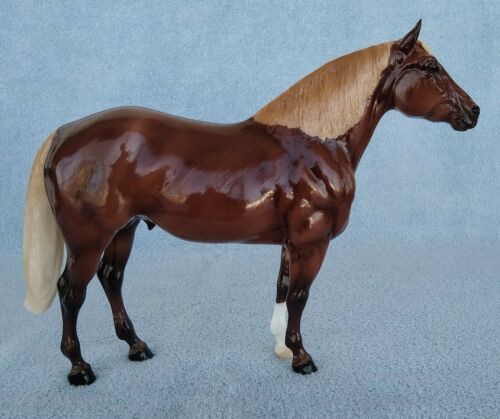 Breyer release special edition models for a variety of sponsored events, and this is one such example. It was produced for the Sunshine Celebration event, held in Orlando, Florida in 2011.

200 attendees won their places there by raffle. And with them came the chance to purchase one of the horses specially crafted for the event. This one was modelled on the Chilean thoroughbred “Cocoa Beach” and came from the Adios mold.

This example had previously belonged to the seasoned Breyer collectors Doris Delizia and Rebecca Kahl. It was one of only 100 produced, and was in factory mint condition when it sold in 2022. Enthusiastic bidders pushed the price to $1,803. 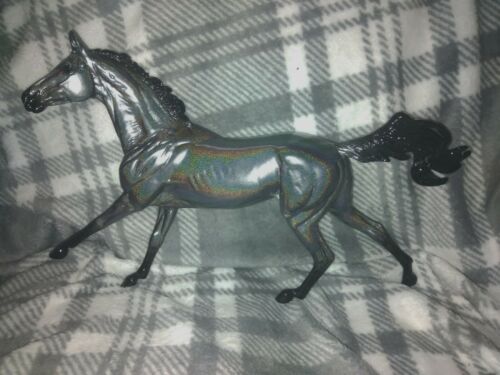 The Akhal Teke is one of the most distinctive breeds of horse, with its beautiful metallic coat. So it was a fitting subject for a special run of models produced for the 2021 Breyerfest.

The run was limited to 200, and this example had a special holographic sheen to its coat. The variation made it exceptionally collectable, and it was also in excellent condition.

One lucky buyer paid just under $2,000 to add him to their collection. 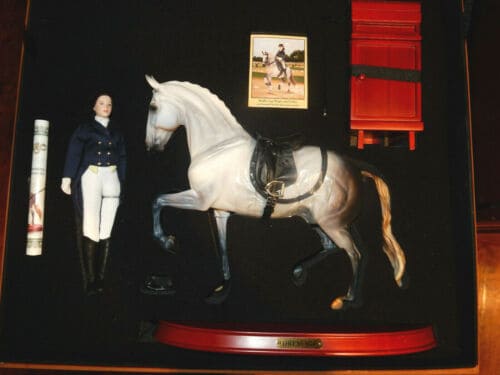 This dressage horse is a limited edition collector set, and came complete with porcelain rider and accessories. It was made in 2008, with a limited run of 500.

The horse was modelled on Salinero, a Hanoverian stallion who won two gold Olympic meals in dressage.

The set was complete and in mint condition when sold, with all the items sill strapped in place in their box. It was a rare find, and sold for $2,100. 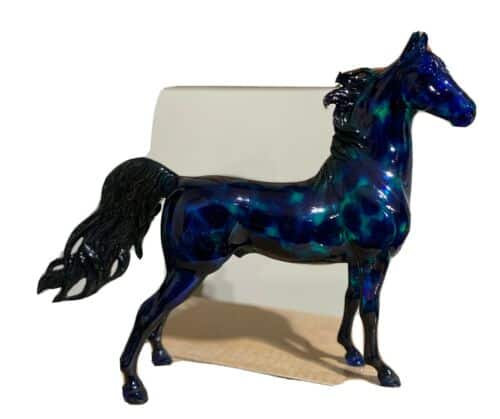 This Banner is Breyer’s model number 711341, finished in glossy green and blue clearwear. It was produced in 2019 as part of a special run for that year’s Breyerfest. And it was one of the most exclusive offerings, with just 30 ever made.

A stamp on his belly read “BreyerFest 2019 30th Anniversary”. The production wasn’t perfect – his hip and nose bore small smudges. But his rarity and interesting colorway meant he was a very desirable horse for collectors. 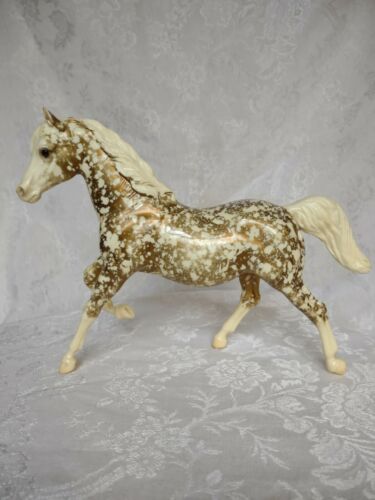 This lovely Gold Florentine Running Mare is a very striking model. She is a true vintage horse, and was made for only one year – between 1963 and 1964. That makes her a rarity for collectors.

This particular example had some slight flaws in production on her neck and shoulders. And she bore some signs of age – slight rubbing on her flanks and the bottom of her hooves.

Collectors clearly felt the wear did not detract from her desirability. She was sold online in 2022 for just under $3,700. 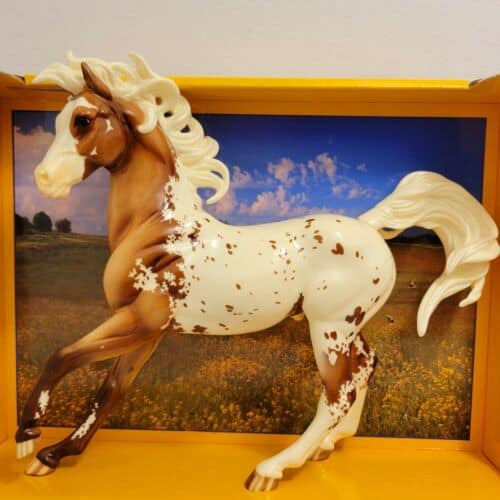 Breyer’s “Gambler’s Choice” horses are made in a range of finishes – usually three. Buyers receive a randomly selected color – hence the gamble!

This model would have been a great result for whoever bought him. His coat is a striking spun gold palomino, with an extended blanket. He was made for the 2011 Breyerfest, and was produced in a run of just 30.

He had no chips or cracks, but there was some paint damage and rubbing to the hooves. When sold online in 2022, he nevertheless fetched $5,100. 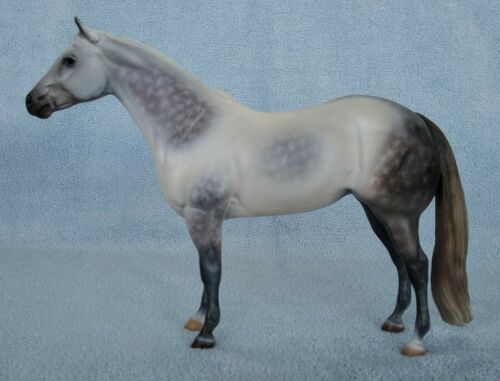 This is another model produced for Breyerfest, in this case the 2015 event. Crème de la Crème is model number 711455, and she is one of only 10 ever produced. When she was sold in 2022, she came complete with her certificate of authentication.

Her dapple rose grey coat and elegant modelling combined with her rarity to excite collectors. She was another of the horses from the estate of Doris Delizia and Rebecca Kahl, and was in excellent condition. She sold for the impressive price of $5,200. 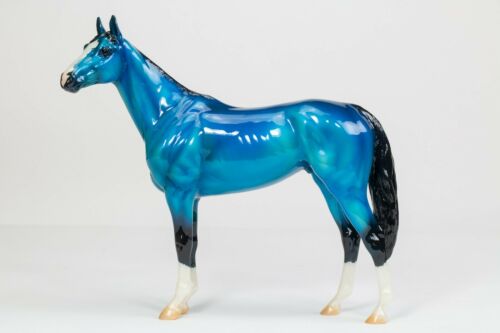 This beautiful model was specially produced by Breyer to support those affected by the war in Ukraine. Its blue coat honoured the country’s flag, and it was auctioned to provide funds to support humanitarian relief efforts.

Reeves International, the company behind Breyer, also pledged to match the winning bid with an additional donation.

As a test model, it was one of a kind, hand-painted at the Breyer Headquarter Studio. That, together with the good cause, pushed the bidding in the online auction to $11,400. 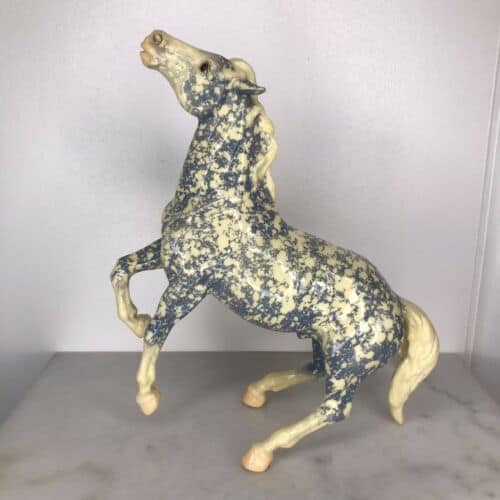 This early model of a semi-rearing mustang dates from the 1960s. The mold stamp it carries differs from models from 1970 and later. This one reads simply “Breyer Molding Co.”, while later versions added “USA” at the end.

The model was crafted by the Breyer sculptor Chris Hess, and it came from mold number 87.

Despite its age, it was in good condition when was sold in 2022. There were some minor signs of wear, and some faint yellowing to the white parts of the coat. Its new owner paid $12,000 to take it home. 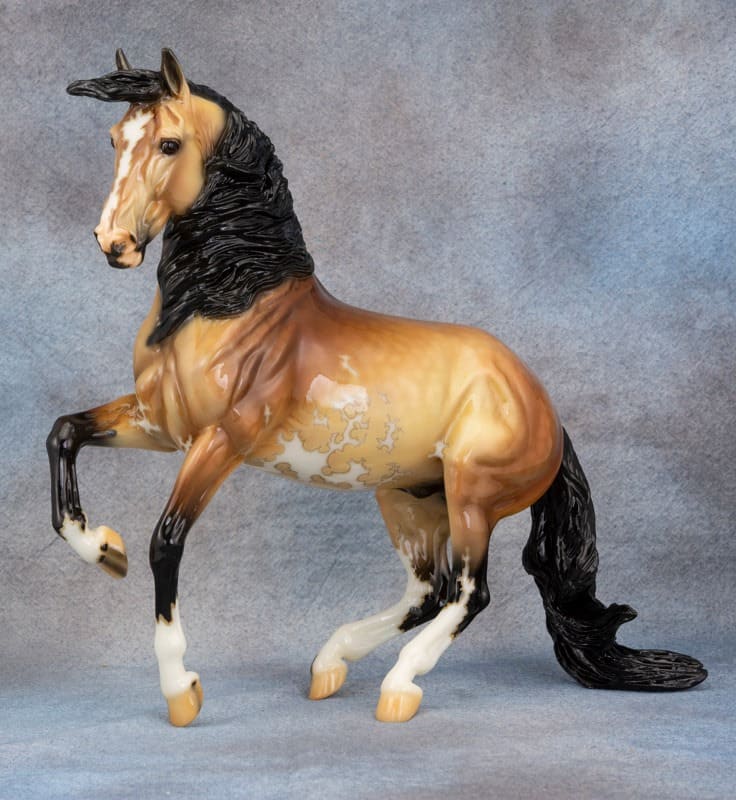 The highest recorded price for a Breyer model was for this dappled sabino buckskin model of “Alborozo”. It was sold at Breyerfest in Kentucky in 2019.

As with all the models sold at Breyerfest live auctions, this one was a test color. That means it used a variety of different colorways and production techniques.

The mold was first shown at Breyerfest in 2008, and subsequently destroyed. A few blank models remain, ready to be given the test color treatment for special editions. This was one – and its sale was awaited with feverish anticipation.

Age plays a part in value, but rarity and condition are more important. And to collectors, the price they’re prepared to pay can reflect a whole range of other factors too.

A model reminding someone of their favorite horse could be worth more to them than the rarest special edition. And when excitement mounts at a Breyerfest live auction, collectors can often get carried away!

And who can blame them? After all, these little horses really are miniature works of art.