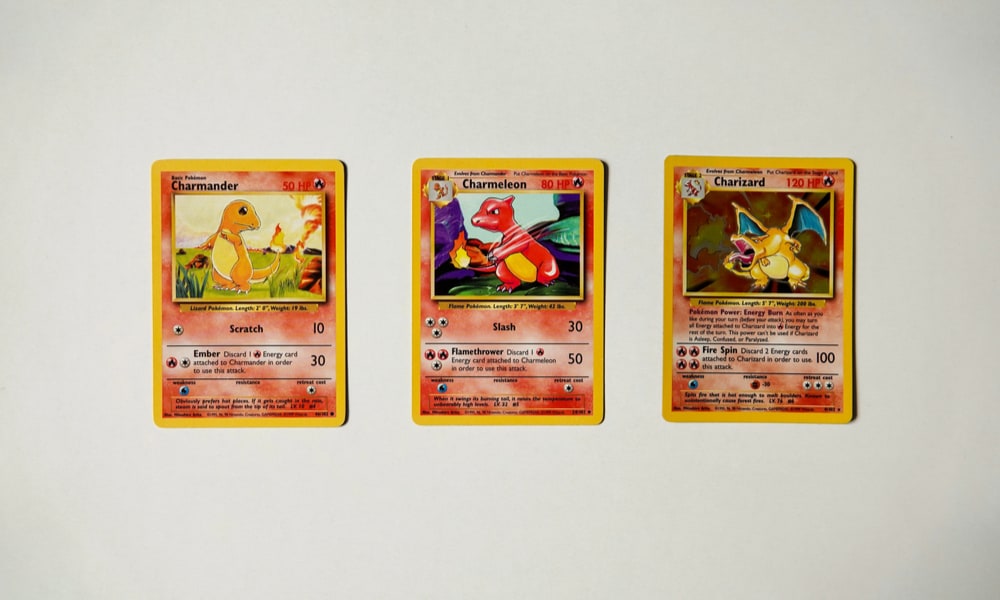 You might be the type of collector that knows Pokémon is short for pocket monsters.

Maybe you played it as a kid, long before the days of Pokémon Go.

Or maybe you’re a trader that knows when you’re onto a good thing.

Either way, the most valuable Charizard Pokémon cards can go for hundreds of dollars, sometimes thousands.

So let’s explore these cards.

Which Charizard cards are worth money?

The majority of Pokémon cards are printed in English and/or Japanese, and these cards have different features. For example, English cards use shapes to define rarity (circle, diamond, star, etc.) while Japanese cards use letters (U, C, RR, etc.). But you can find other languages.

As a trader or collector, you probably know Charizard has a different name in Japan – it’s known as Lizardon (pronounced Rizadon). You also know its unevolved selves, Charmander aka Hitokage (basic) and Charmeleon (Stage 1). Charizard is known as the Flame Pokémon.

The Pokémon franchise covers mobile games, TV shows, movies, and even music. But in the trading space, Pokémon Trading Game Cards (TCG) are the medium of choice. Close to 1,000 species exist so far, but Charizard cards offer the most consistent profitability levels.

Curiously, at least in this case, the chicken came before the egg, so to speak. Hitokage aka Charmander – the basic unevolved version of Charizard – was created after Charizard got famous. Because it’s so dragon-like, its English name comes from char or charcoal + lizard.

In theory, Pokémon TCG is good for kids because it teaches them reading, math, and strategy. They have to look at the characteristics of each Pokémon as listed on their card, then figure out the best move to make. Trainers use stats to figure out who won the battle.

During each turn, they have to add and subtract health points (HP), energy, and other stats. Surprisingly, unlike many franchises, the videogame came first. This popular game was later developed into cartoons, toys, and trading cards for physical tournaments IRL (in real life).

To the uninitiated, the concept of Pokémon can seem cruel. After all, you collect these creatures and make them fight each other! But unlike cockfighting or dogfighting, Pokémon encourages good sportsmanship and fairness. The Pokémon even have an in-game hospital!

Also, TCG Pokémon don’t die during a game. None of their wounds are fatal. Instead, they faint or get knocked out, then they can go to the hospital aka Pokémon Centre to heal and recover before their next battle. But in the anime and manga versions, things can get rough!

Did you know the creator of Pokémon – Satoshi Tajiri – collected insects as a kid? This was his inspiration for building the Pokémon universe. The characters and storylines are popular, but Charizard has always been way up there. One of its cards sold for over $300,000 in 1999.

Why is Charizard so beloved? Different reasons. Kids seem to love its stubbornness and protective power in this big scary world. Teens and tweens seem to relate to its growth from the cute, cuddly, innocent Hitokage to a formidable fighter with wings and flaming breath.

When new Pokémon TCG cards are released, you can buy them at any toy store or videogame supplier. In Japan, you can even get them in vending machines. But because the rarest cards can get flipped for thousands of dollars, you’ll find a lot of fakes in the trading card market.

One easy way to authenticate your Pokémon card is to point a flashlight at it, ideally in a dark room. You can use the light on your smartphone, or even a candle. Or try holding it up to the sun. Fake cards often use thinner, lower-quality paper, so the light will shine through them.

Oddly, several high-profile groups consider Pokémon controversial. PETA objects to forcing creatures to fight. Various religious institutions have decried the use of crosses, six-pointed stars, and triangles. A few organizations worry it introduces kids to the occult and gambling.

All that aside, Charizard (or at least Charmander) is a pioneer. Along with Squirtle, Pikachu, and Bulbasaur, it was among the first set of Pokémon ever. Of the four, Hitokage was the only one that could do 100 HP in damage. The first Pokémon Gameboy had 150 species total.

There’s a little merit in the concerns against Pokémon. One episode featured strobe lights that caused more than 600 Japanese kids to have seizures and end up in hospital. And don’t forget the time Monsters in My Pocket sued for copyright infringement and lost. Twice.

For most kids, having the right Pokémon cards would help you win a game, so they’re often used. But even among kids that don’t actively play, a well-kept Charizard card would make you pretty popular. So lots of kids kept theirs in sleeves and albums to preserve their value.

Pokémon Go was released in 2016. Gameplay is similar but while you can catch wild Pokémon, you can’t battle them in the same way as the videogame or TCG. Defense battles only happen at Gyms. But the game has caused lots of minor accidents by distracted trainers.

Still, Charizard’s popularity has a lot to do with its personality. Type-A kids connect with its strength and power because it’s how they see themselves. And for the underdog, the kid that gets bullied or labeled as ‘different’, Charizard becomes a loyal psychological defender.

Because it can fly and breathe fire, Charizard is among the most powerful Pokémon. But this superiority is tempered. Yes, Charizard will sometimes trigger wildfires, but their ethics and values mean they’ll never consciously barbeque a weaker opponent. There’s a catch though.

While Charizard is clearly a fanboy favorite, it didn’t get any competitive teeth until the 6th generation when it achieved Mega Charizard Y status with superior flying. Like all Pokémon, Charizard’s name stays the same whether it describes a singular, plural, male, or female one.

As a child, you may have nagged your parents into buying endless booster boxes. These Pokémon packs carried a batch of 36 packs that had 10 cards each, and you rifled through it all in search of elusive Charizard. And as an adult, you may still willingly fork out thousands.

This is partly what makes the trading card business so profitable. A lot of us will pay an arm, a leg, and a kidney to buy that one Charizard we never got when we were little. Even Logan Paul got into it, wearing his Grade 10 Shadowless Charizard as part of that infamous stunt.

If you’re inexperienced, all trading cards look the same. You won’t know which one to buy, and even if you have the right title and specs, you won’t know which listing to pick. The quality of the card makes a difference, as does its professional grade. But how can you tell?

You can identify rare cards by checking their rating. This ranges from common to secret rare. All cards are part of a batch, so you’ll see them numbered as 1/87 or something like that. The rarest cards fall outside the batch, so you may see a number like 257/256, aka Secret Rare.

We’ve talked a bit about the origins of Pokémon. It started as an 8-bit videogame where you could catch, train, and battle these pocket monsters. Later, trading cards listed the strengths and stats of each creature, allowing you to battle your creatures offline in face-to-face games.

You can now play the trading card game online, challenging opponents around the world. But you can also play Pokémon Go, a mobile game that focuses on capturing new Pokémon through augmented reality. You’ll find creatures in your real-world surroundings via GPS.

Pokémon Go showed up ten years after the original 8-bit game and was intended to invite a new audience to the Pokémon Universe. Yet even in this revamp, Charizard got a special place. When you start the game, you choose between Charmander, Bulbasaur, and Squirtle.

After choosing your first Pokémon, you explore the game world, catching, hatching, or buying more Pokémon using real-world landmarks. Their hideouts are based on local maps, so you’ll find virtual Poké-Stops and Gyms anywhere, from the grocery store to the bus stop.

You may have heard the joke about how in the old days, it was a struggle to get kids indoors. But these days, you practically have to pay them to go outside! And marketers use these trends. Yes, Gameboy’s Pokémon was a portable console. But Pokémon Go forces you out!

You can get sightings or directions telling you where a particular Pokémon is hanging out, then you have to physically walk there and capture it. So it’s good exercise. And it doesn’t emphasize violence as much as the traditional versions of the game, so parents are happier.

Of course, the market controls how things go. So while parents and teachers may have loved the ‘lite’ quality of Pokémon Go, some trainers wanted the true experience, virtual gore and all. So in 2020, Pokémon Go introduced competitive leader board battles, just like in TCG.

The Go Battle League lets you participate in raids and formal contests. And it works in real-time, so you can challenge other trainers online. It’s a more advanced stage of gameplay though, so it takes time, skill, and resources to unlock this section of the mobile game.

The usual way to get Pokémon trading cards is to buy a pack of 10. Each pack has a random selection of cards including at least one rare card and possibly a reverse holo(gram) card. But since it’s random, you can’t be sure you’ll get Charizard, much less the specific one you want.

This is why the online trading space is booming, and why collectors spend so much to get a particular card. Active trainers won’t spend much because they use their cards a lot and wear them out. But collectors will keep the card in a special display case, so they’ll pay thousands!

Like all online trades, the asking price gives you a limited amount of information. Yes, the seller may have done their research and included all the relevant details before setting their price. But unless a buyer is ready to pay, that figure remains theoretical. There’s no proof.

If you want a more accurate estimate of what you should be paying (or asking for), check for listings of verified sales. Many sites have a search filter that lets you focus on confirmed sales. It’s the only way to validate the cost of the most valuable Charizard Pokémon cards.

Pokémon TCG trainers value cards for their characters and stats. But newbie collectors and traders may be drawn to the eye candy, so here are a few things to know. Some cards are holo cards, meaning the Pokémon sits on a reflective, iridescent surface with a calmer backdrop.

On reverse holo cards, the background is holographic while the creature is in regular print. And on full art cards, the Pokémon doesn’t sit in a little window on the top third of the card. Instead, the image covers the whole card with no borders or edges. Also, don’t buy proxies!

Do you have tips on finding the most valuable Charizard Pokémon cards? Sharing is caring!