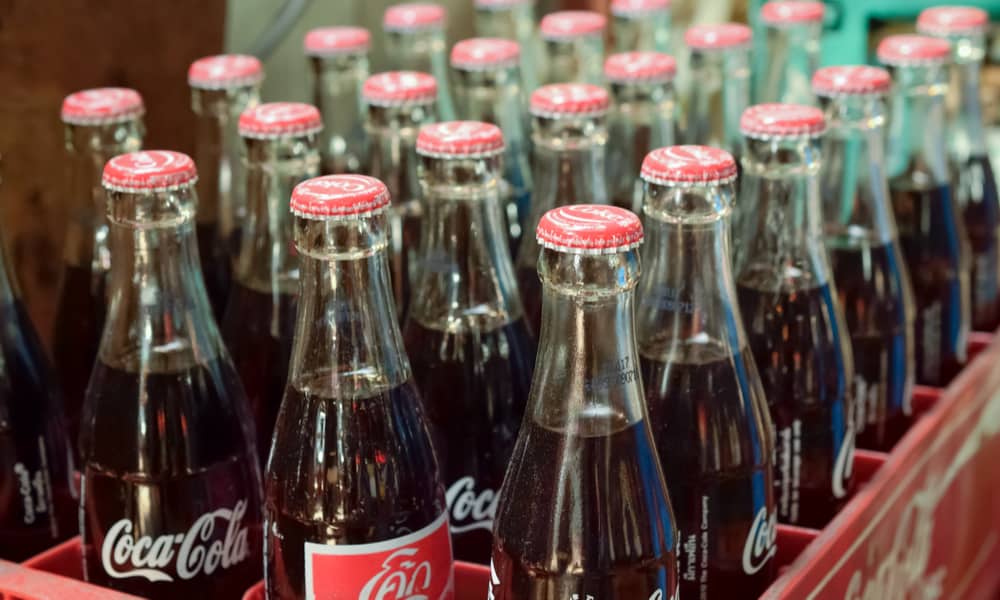 Collections comes in all shapes and sizes. And you might be surprised at just what kinds of objects can be worth a lot of money.

One example is Coke bottles. You may have been able to pick one up for a song when they were first produced. But rare examples these days can fetch high prices. After all, Coca-Cola is an iconic American brand.

So just how much might you have to pay to get your hands on the crème de la crème of Coke bottles? That’s what we’re here to find out! Come with us, as we explore the 10 most valuable Coke bottles of all time …

Most Valuable Coke Bottles Worth Money 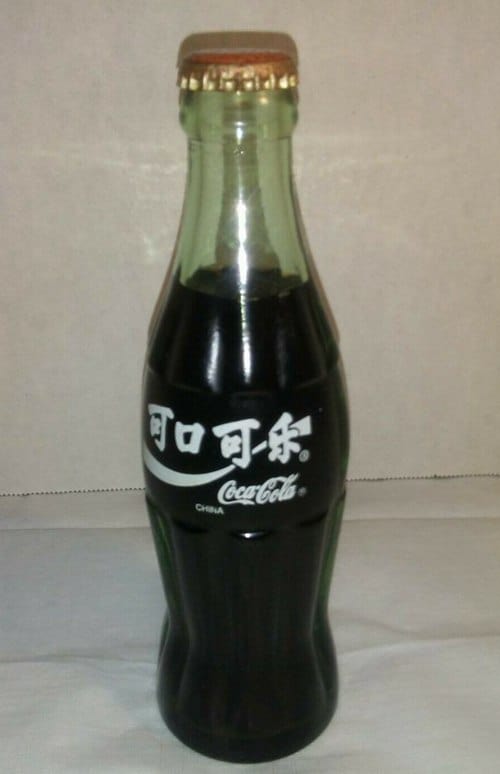 Often, the reason apparently everyday objects are very valuable is because they connect to a historic moment in time. And so it is with this Chinese Coke bottle produced in 1992.

That year saw the opening of the largest McDonald’s restaurant in the world in Beijing. China’s first McDonald’s had opened two years earlier, in the Shenzhen Special Economic Zone.

The new restaurants were seen as signs that China was beginning to open its doors to the west. It was hoped that this would pave the way for a new understanding and global relationships. Today McDonald’s is well-established in the country, with almost 2,500 branches.

Fast forward to 2020, and this unopened Chinese Coke bottle from 1992 went under the hammer at auction. It was in excellent condition, despite its 28-year vintage. And it had been produced specifically to commemorate the opening of the largest ever McDonalds.

It seems that buying into this kind of history doesn’t come cheap. The bottle sold for $1,500.

Packaging food and drinks is an exacting business. You want something that’s inexpensive, durable, and that won’t affect the quality of what’s inside.

As a result, the history of Coca-Cola bottles has seen many innovations. One of these was the development of the applied colored label. You can see it here on this bottle made for the Thai market in 1973.

The idea behind applied color labels – or ACL – was to add the color directly to the glass. This meant that there was no paper to degrade or get damaged during production and shipping. And the bottles would look just as good after washing, allowing them to be reused.

If only we took such a sustainable approach to packaging today!

The Coca-Cola company used applied color labels from as early as 1941. The labels were limited to two colors, but were very durable. Nevertheless, examples with the labels completely intact are fairly rare. And it is this rarity that determines prices.

This example of a bottle used in Thailand was in excellent condition when it sold on an online auction site in 2020. The price? $3,350. 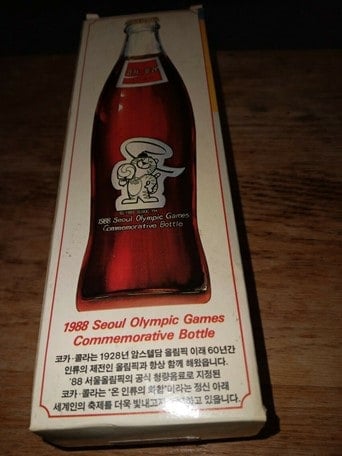 Here’s another example of a bottle that highlights a moment in history. In 1988, the South Korean capital, Seoul, hosted the Olympic Games. It was the first time the country had hosted the Games, and only the second time in their history that they had been held in Asia.

They were historic for other reasons too. More countries took part than in any other year in the Cold War era. And these were to be the last Olympics before the Cold War ended. Neither East Germany nor the Soviet Union existed when the next set of games rolled around in 1992.

That final games for the Soviet Union saw the country achieve a record medal haul – 132 in all. And of those, 55 were gold.

The Games were hugely important to South Korea too. It was only 35 years after the Korean war ended, and they took place during a decade of unrest. Their immense success elevated the country’s international reputation and became a symbol of national pride.

It’s hardly surprising, then, that mementoes of the 1988 Olympics can be very valuable. Coca-Cola were official sponsors of the Games and produced a commemorative Coke bottle for the occasion. It had Olympic art on both sides of the bottle, and came in its own special cardboard box.

This unopened version in great condition was sold via an online auction in 2021. It made an astonishing $2,500. Prices are fickle, however. Another example sold a few months later for $1,500. 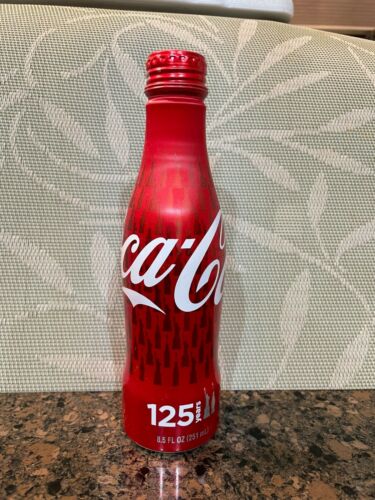 Even Coke bottles around just a decade old can be worth big money. As ever, the key is rarity.

This aluminum Coke bottle was one of a handful produced in 2011 to commemorate the 125th anniversary of the Statue of Liberty. It was a double celebration for Coca-Cola, which was also marking its 125th year.

The bottles were never produced for mass circulation. Instead, they were exclusive to a celebratory party which took place on Liberty Island in October 2011.

The combination of scarcity and the connection to two American icons – Coca-Cola and the Statue of Liberty – meant there was hot competition for this bottle when it came up for sale. It was in good condition too – unopened and factory sealed.

Its appearance on an online auction site in 2022 attracted multiple bids. The final hammer price was $1,245 – not bad for an item that was then just 11 years old. 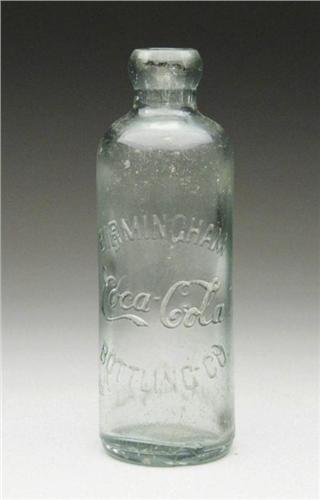 Today, the sloping shoulders of the iconic Coca-Cola bottle are known to millions. But it didn’t always look that way.

Hutchinson’s bottles were the first ever used to package Coca-Cola. They had straight sides and a metal stopper. And there were no paper labels. Instead the name “Coca-Cola” was embossed on the side of the glass.

It was the stopper that gave Hutchinson bottles their name. To open the bottle, you had to press down on a metal loop on the stopper. This would break the seal with a pleasing sound. It was this that gave soda its alternative name of “pop”.

The bottles were produced for a relatively short period – around 17 years. And this was a time well before people started to consider saving and collecting them.

As the Olympics commemorative bottle shows, sporting memorabilia is always collectable. And this Coke bottle commemorating the 25th season of the Dallas Cowboys is another great example.

It was produced in 1984, the year the Cowboys celebrated their 25th year in the NFL. And despite being a relatively new bottle, it has a distinctive and unusual shape. Here the sides are straight, rather than curved. And the unusually long neck bears the slogan “Coke is it!” printed on a diagonal.

But what will really get Cowboys’ fans’ juices flowing is what appears on the back of the label. This is a list of every game the team played during their time in the NFL, together with the result. 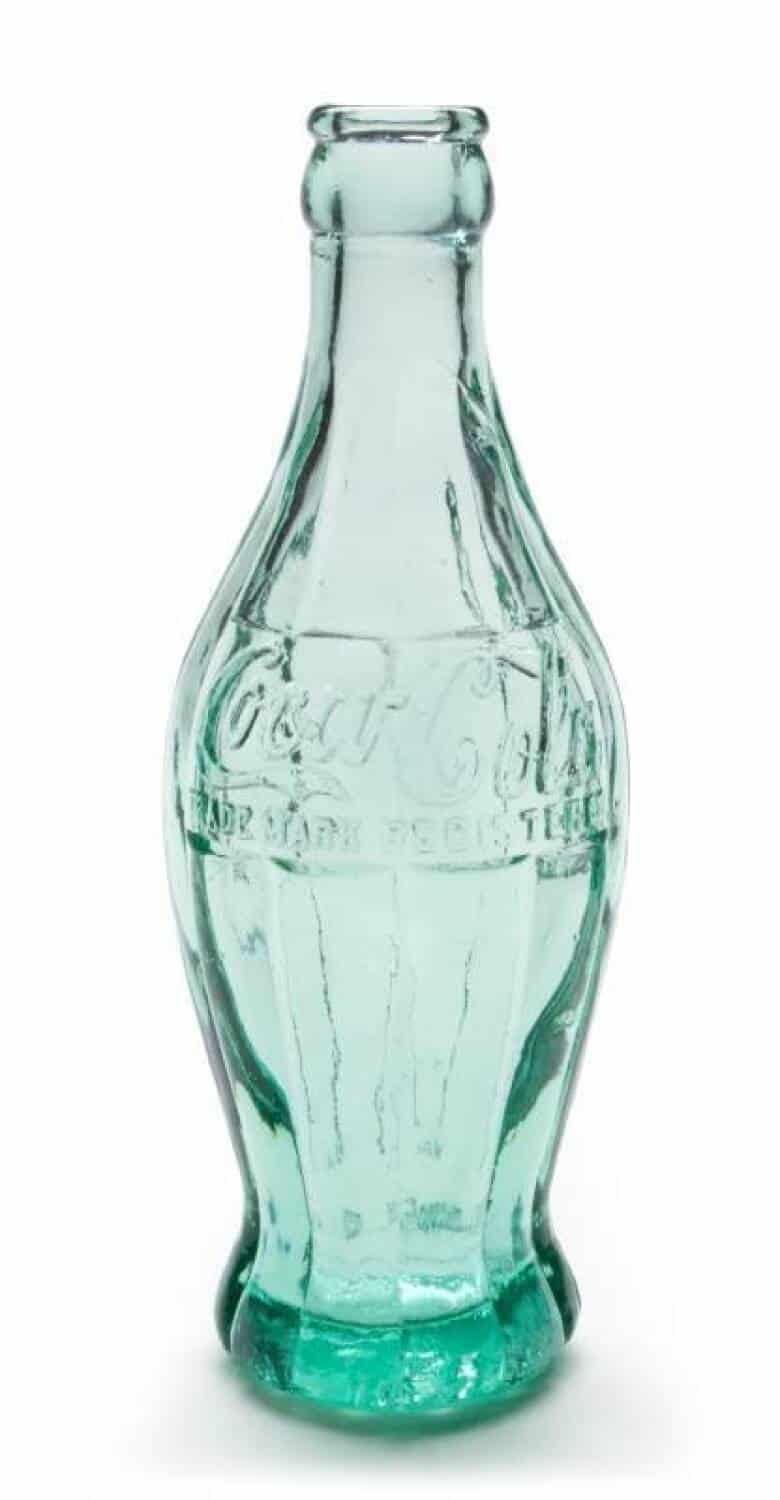 The priciest Coke bottles ever to have come to the market were two prototype designs. These provided the basis for the iconic design to be patented, which it was in 1915.

The bottles were produced by the Root Glass Company, who won a design competition run by Coca-Cola. The new designs featured what came to be known as the classic “hobble skirt” shape.

They were shrouded in secrecy – the Root Glass Company even hid the brand in the drawings used to apply for the patent.

The original design immediately won favor with the Coca-Cola board – but changes were required. The lower part of the bottle needed to be modified to allow it to be produced by the company’s bottling machinery.

The amended prototype was tested in secret, before the new design was introduced for sale in 1917.

Two prototype models have come up for auction. The first to hit the sale rooms was thought to be the original prototype from the estate of Earl R. Dean, the bottle’s designer. It was sold at auction in 2011 for $240,000.

A modified version of the prototype, thought to date from 1915, went up for sale in 2019. This bottle was embossed with “Atlanta GA” on the base, and had been the property of a former Coca-Cola employee. It achieved a hammer price of $110,700.

Here’s another example of how lucrative the partnership between Coke and sports can be. This bottle was produced in 1974 in honor of that year’s FIFA World Cup – the premier international soccer tournament.

With millions of football fans around the world, rare World Cup memorabilia is always highly collectable. And when it’s partnered with a brand like Coca-Cola, prices can reach dizzying heights.

This bottle came up for auction in 2020 on an online auction site. It was in good condition, firmly sealed, and with the contents intact. Rumor has it that those contents, somewhat bizarrely, included a syringe – but this has never been verified.

This bottle made a truly astonishing $29,900 for its seller. 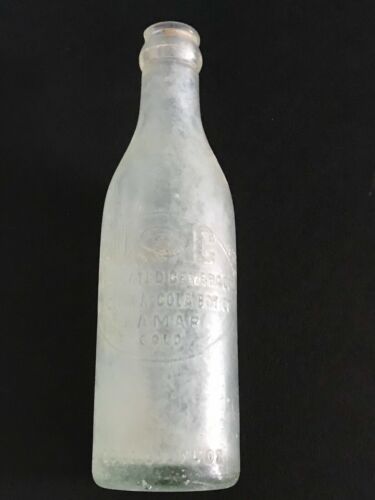 Up until the 1960s, Coke bottles bore the names of the towns where they were manufactured. There were around 1,450 such locations, with 250 or so of those now being particularly rare. Those are usually smaller towns, or those that are no longer in existence.

Conversely, bottles produced in towns that still have bottling facilities are unlikely to be valuable. Even the earliest examples may fetch no more than $10.

If you want to check the value of a bottle embossed with a particular town, you’ll need guidance. Bill Porter’s Coke Bottle Checklist provides comprehensive details on locations, scarcity and value. It’s currently in its fifth edition, and is an essential buy for anyone looking to find out more.

This example is embossed with “Coca Cola Bot. Co, Lamar, Colo.” – that is, Colorado. The straight edged design dates it to before 1917. It is embossed with UIC and 27S on the base. UIC is embossed on the side too, but here the “I” is substituted for a picture of an eye, complete with eyelashes.

The condition of this bottle is far from pristine. It hasn’t been cleaned, and there’s a sizable chunk of glass missing from the rim. Even so, it’s a rare find for collectors. It’s currently for sale with an asking price of $7,495. 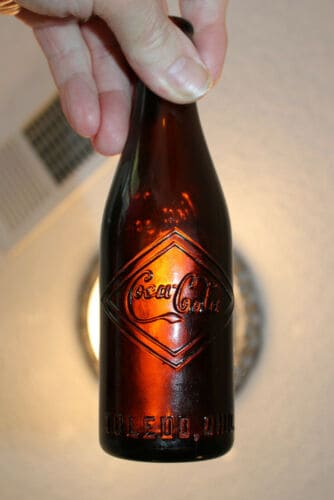 We’ve already seen that bottles embossed with the names of certain towns can be collectable. Another category of collectable Coke bottles is those made of colored glass. This amber glass version from Toledo, Ohio, will appeal to collectors of both types.

The straight sided bottle design makes this an earlier example. The amber glass is a darker shade. The Coca-Cola logo appears in a double diamond in the center of the bottle, while “Toledo, Ohio” is embossed at the heel.

It’s in good condition, without any cracks or chips. And although the glass has a light haze and wear from being in a case, there’s no staining.

All this meant that when it was put up for sale on an online auction site, it was snapped up. The buyer paid the princely sum of $685 to add it to their collection.

Ready for the Real Thing?

That brings us to the end of our look at ten of the most valuable Coke bottles of all time. We hope you’ve enjoyed learning more about them.

Some of the most expensive specimens on our list commemorate particular moments in time. But beware – not all commemorative bottles are automatically valuable.

In recent years, Coca-Cola have produced more and more special editions for all manner of events and holidays. With greater awareness of the value attached to older commemorative bottles, these new editions have frequently been held onto as collectables.

That, of course, means that there are more bottles out there, and in good condition. And that in turn means that prices stay low.

There are, though, still lots of exciting opportunities to find hidden treasure. From older commemorative editions to rare examples embossed with particular towns, there are lots of options for collectors. Enjoy the hunt, and we hope you strike gold!