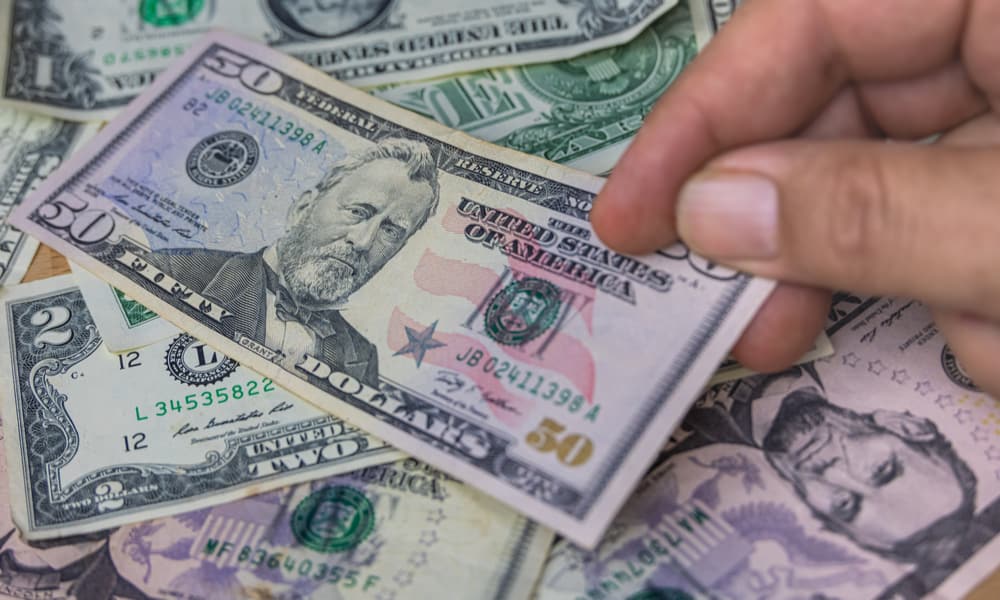 When you think of collecting currency, it’s probably coins that immediately spring to mind. But banknotes can be very precious too – and that includes dollar bills.

We’re going to take a look at eight of the most valuable dollar bills out there. Some have historical significance. Others are interesting because of details of their appearance. But what they all have in common is a value much higher than the number printed on the front.

So if you’re ready to find out more, let’s take a look at some very expensive pieces of paper …

April 26 2013 saw an exciting moment for banknote collectors around the world. A $1,000 Red Seal banknote was about to go under the auctioneer’s hammer.

The note was larger than those we’re used to seeing today. It was known as a Treasury note, or sometimes as a coin note, and it dated from 1891.

This kind of notes was produced after a new law was passed in 1890. It allowed the Treasury to exchange pieces of paper for silver bullion.

Anyone holding a note could change it back for coins. It was up to the Treasury whether the payment was made in silver or gold. Treasury or coin notes like this have far fewer variations than later notes. And their rarity and historical significance make them very valuable.

This particular note had a small red Treasury seal on the front. And it bore the signatures of two important men – Daniel N. Morgan, the US Treasurer, and James F. Tillman, the Register of the Treasury.

It also featured an early innovation to make it more life more difficult for would-be forgers. The back of the note had open areas where red and blue paper fibers could be seen.

Despite its age, the note was in excellent condition. And it was the only one of its kind available to private buyers. The sole other survivor resided in the Smithsonian Institution.

It’s hardly surprising, then, that the sale attracted worldwide attention. The price when the hammer eventually fell? A cool $2.5 million.

That auction night of April 26 2013 saw a second rare and valuable $1,000 banknote go under the hammer. Like the Red Seal specimen, this was a Treasury note. It dated from a year earlier, 1890. And it bore the surprising moniker of the “Grand Watermelon”.

The name came from the way the $1,000 was printed on the back of the note. The three green zeros were fat and striped, looking for all the world like watermelons.

The face of the note bore the portrait of George Gordon Meade, a Major General in the US Army. And it carried a Treasury seal too, this one brown with spikes around the outer edge.

The front bore the signatures of the then US Treasurer and Register of the Treasury, J. N. Huston and William S. Rosecrans respectively. This note too was in excellent quality, if slightly less fine than the Red Seal note.

Just two of these notes were known to exist in private hands, along with a third slightly different variation. The same note had last been sold in 1970, when it fetched $11,000 – the equivalent of about $79,000 today.

It seemed that those watermelons really had rocketed in price, however. When the hammer fell, the Grand Watermelon became the world’s most expensive banknote, realising a price of $3.3 million.

Not all valuable dollar bills are connected to historical events. In some case, it’s the simple human love of patterns that gives them their value.

Many collectors seek out bank notes with serial numbers that have a particular sequence. And that’s the case with what’s known as “ladder” dollar bills.

These are the rarest and most desirable of the “interesting serial number” family of banknotes. A ladder note is one where the digits climb in perfect sequence.

Bank notes where the serial numbers descend in the same way are known as “reverse ladders”. These are valuable too, though less so than the ascending versions. Again, the sequence from 8 to 1 is the most sought after.

Some people also consider serial notes beginning with zeros to be ladders – for example, 00001234. “Broken ladders”, where the sequence is correct but broken by zeros, also command a premium – albeit considerably less than the real thing.

And some enterprising sellers have invented the concept of a “scrambled ladder”. This has nothing at all in common with a ladder, except that each digit appears only once in the serial number. It’s nevertheless a way for people to get a slightly more interesting note at a lower price point.

Ladder notes can be of any age or denomination – it’s simply the serial number that’s significant. The chance of an 8-digit ladder being randomly generated is 1 in 33.33 million – so they’re very rare. And if you’re looking for a perfect ladder, the odds are 1 in 100 million.

So what does this mean for value? Well, the precise value will depend on the condition of the note. But you can expect to pay at least $5,000 for a ladder serial number.

Currency is a serious part of national monetary policy. So serious, that it’s allegedly illegal for a private collector to own this next banknote.

The $100,000 bill was the highest denomination note issued in the history of the US government. It was printed in 1934. And it was never intended to be used by normal people – not even those with hundreds of thousands of dollars to spend!

Instead, its purpose was to make it easier to move funds between different branches of the Federal Reserve. The front of the note bears the portrait of President Woodrow Wilson. The back promises that the sum of $100,000 in gold will be paid on presentation of the note.

Of course, the value is neither here nor there if it isn’t possible to sell the notes. And that’s a matter of some debate.

Whilst some commentators claim that owning such a note privately is still illegal, others disagree. In 1974, President Gerald Ford passed an Executive Order that apparently ended restrictions on owning and trading gold certificates issued by the US Bureau of Engraving.

So if you’re lucky enough to find one of these notes, it’s worth taking legal advice on their status.

$500 dollar bills were used by the Federal Reserve between 1861 and 1969, although the last were printed in 1934. As a result, there are a lot of them around! Their value differs widely, depending on the rarity and condition of the note.

In some cases, they’re worth little more than their face value – around $550, But rare and high quality notes can be worth a great deal more.

Some series are more valuable than others. A 1934 green seal note, for example, will be worth only between $550 and $700, even if it’s in the best possible condition.

But a note that dates from 1928 is a different matter. 1928 was the year the bank moved away from the larger notes it had been using. The smaller format was far more similar to the notes we see today.

And if the note, like this one, is a “star note”, it’s even more valuable. This is a note that has a star at the end of the serial number. It means that the original note of that number was defective. As a result, it was replaced, with the new note having a star added at the end.

Star $500 notes, in any condition, will fetch between two and four times the price of a standard note. A 1928 star note, even with imperfect printing like the one in the photo, is worth at least $32,000.

One of the rarest banknotes out there is the $10 silver certificate issued in 1933. And as we know, rare means expensive!

The $10 bill is the only Federal paper note of any denomination to bear the date 1933. Only 216,000 were originally printed, and records suggest that as many as 60,000 of those might have been destroyed. Today, only 50 or so such notes are known to survive.

Another detail on this bill makes it very interesting to collectors – including coin collectors. It’s the only bank note that uses a slightly different form of words in its redemption clause.

In every other case, the clause promises to pay the bearer on demand the relevant sum “in silver”. But for the 1933 $10 silver certificate, the wording refers specifically to the sum being paid “in silver coin”.

The precise value of one of these notes depends on its condition. You can pick up a used but good note for around $5,000. The choicest notes, however, can fetch much larger sums. One of the finest grade examples sold for just over $70,000.

You might be surprised – and horrified – to learn that in the history of US banknotes, a woman has featured as the main portrait only twice. And if you’re thinking that this must have been a more modern appearance, think again. The two instances were in 1891 and 1896.

In both cases, the woman depicted was Martha Washington. The 1891 note is usually referred to by collectors as the “Martha”, while the 1896 version is the “ornate Martha”. The latter has a green back that’s quite different from the 1891 version.

The value of these notes again varies widely, and here the main determining factor is their condition. There are no star versions to complicate matters. Basically, the cleaner and flatter the note, the better the price.

The only exception to this is notes with lower serial numbers – below 100. These will command a premium.

An 1891 Martha that’s clean and bright, with crisp paper and absolutely no folds, can fetch around $1,500. Take a look at the one in the picture as an example. You can add more to that price if the note is perfectly centered – and of course, if it has a low serial number.

While it’s fairly rare to find one in everyday life, the $2 bill actually remains in circulation to this day. As a result, most aren’t valuable. But there are exceptions. And the 1928-B red seal star note is the most important of those.

Not only is it rare amongst $2 notes, it’s rare period. For collectors of small sized star notes, the 1928-B Red Seal is pretty much the crème de la crème.

All the notes in this series were produced between February 1932 and March 1933. They bear the portrait of Thomas Jefferson on the front, and Monticello on the back.

As we’ve seen, star notes are produced when the original note is defective. No-one knows for sure how many of the 1928-B $2 red seal star notes were originally printed. But today, fewer than a dozen are known to exist.

An unstarred version of the 1928-B series, in good condition and certified by the PMG, is currently on sale for $1,750. An uncirculated starred note from the same series could fetch at least $15,000.

That brings us to the end of our look at some of the most valuable dollar bills of all time. In every case, rarity is an important factor. Condition will almost always have a big impact on the price achieved too.

Some banknotes are important historical artefacts – like the silver certificates produced in 1933. Others are valuable for different reasons. Dollar bills with interesting serial numbers – especially ladders and numbers below 100 – are always collectable.

Whether you’re a collector yourself, or just hoping to find treasure in your attic, we hope you’ve enjoyed discovering more.