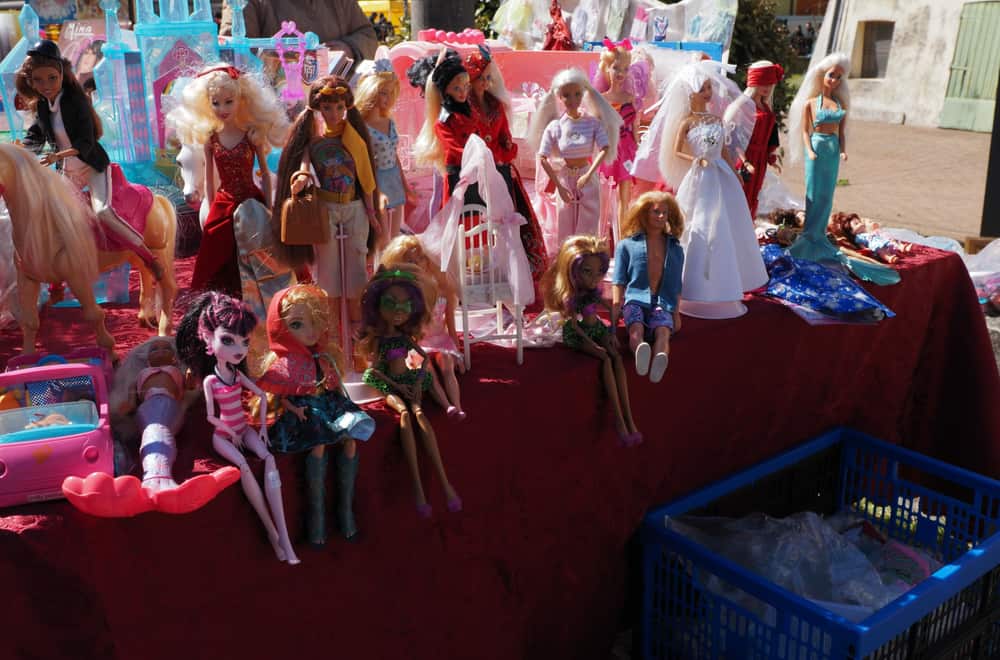 Barbie exploded into the world of toys back in 1959. Since then, she’s been played with by children the world over.

But she’s more than an icon amongst dolls! Some versions of Barbie are highly collectable. And they can be worth a surprising amount of money.

So which Barbies are valuable? And just how much might they be worth?

That’s what we’re going to find out! Join us, as we learn more about the 15 most valuable Barbie dolls ever made …

Most Valuable Barbie Doll Worth Money

In September 2006, the famous London auction house, Christies, had a sale dedicated to Barbies. The dolls were from the collection of Ietje Raebel and there were more than 4,000 of them. They included everything from the earliest vintage dolls to later limited editions.

One of the highest priced dolls at the sale was this vintage Campus Sweetheart Barbie, model number 1616. She dated from 1965 and was dressed in a prom dress with pink tulle skirt and strapless cream satin bodice. She wore elbow-length white gloves and a pearl necklace.

She carried an unusual take on a bunch of flowers – a silver trophy cup with roses and foliage. She had straight legs and her body was highly-colored, a shade used for the Japanese market. And she had ash blonde hair worn in a chin-length bob. 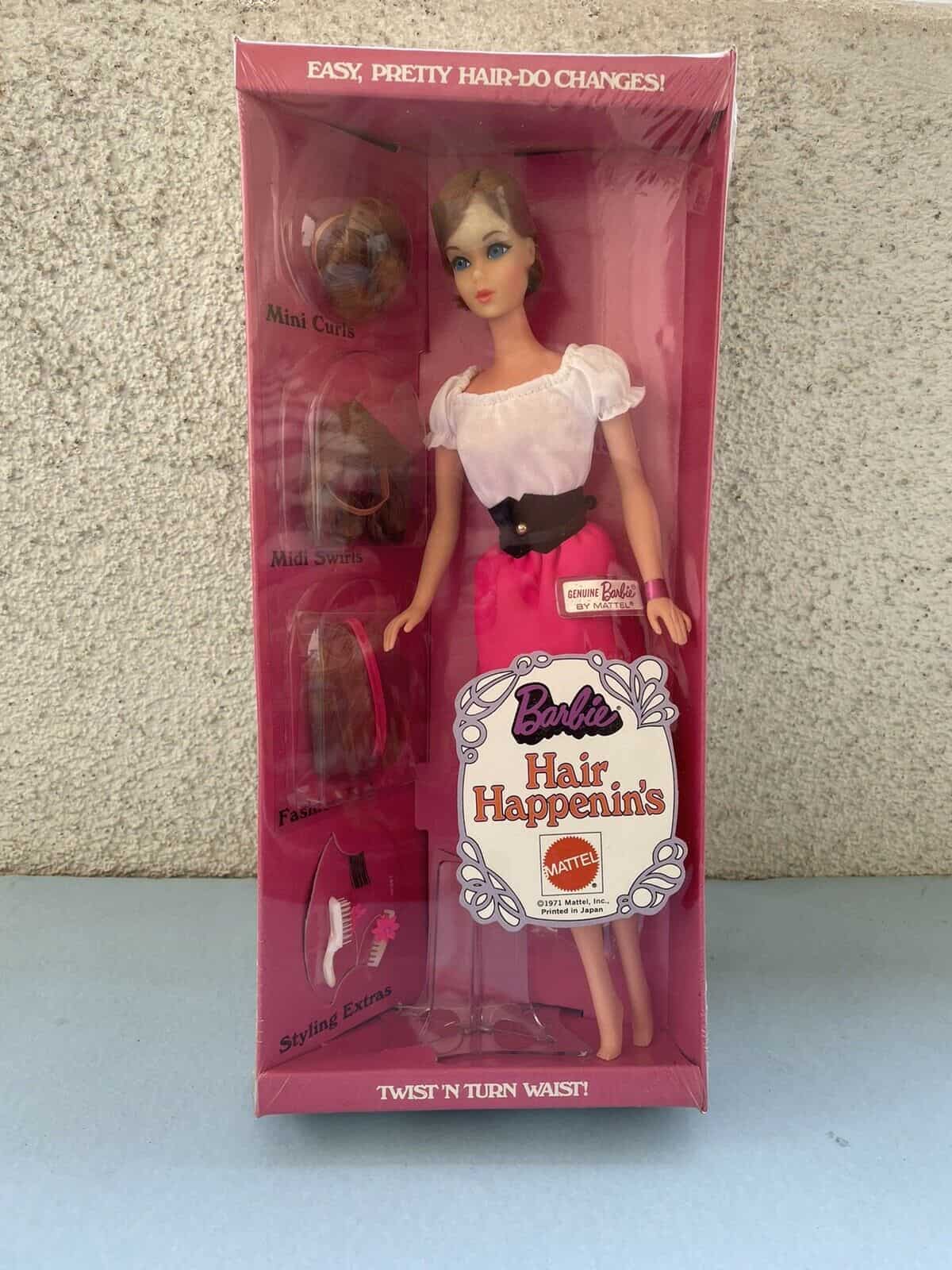 This vintage Barbie had loads of features to appeal to children. She had bendable legs and a waist that twisted and turned, allowing her to be posed. Her stand doubled as a seat. And she had real eyelashes, rather than painted ones.

But most exciting was her hair. Her chin-length bob could be changed with three separate wigs – “mini curls”, “midi swirls” or the longer “fashion fall”. And she came with two combs and a number of bobby pins too.

She was offered for sale in her original box, from which she had apparently never been removed. And she was snapped up by an online buyer in 2022 for $3,255.

You might imagine that to be valuable, a Barbie has to be old – but you’d be wrong. This Fabulous ’20s Barbie was made in 2021. But she nevertheless fetched $4000 when she came up for auction the following year.

She is dressed in a pink outfit styled to look like a 1920s flapper dress. On her head, she wears a flamboyant feathered headdress. And she is dripping with jewels, wearing pearl necklaces and sparkling diamante earrings.

She was made specially for a Barbie convention, which took place in Madrid the same year. And when she came up for sale, she was in excellent condition and presented in her original box.

But just why was she so expensive? The answer lies in her rarity. She was one of only 35 such dolls ever made. And that made her a precious find for collectors. 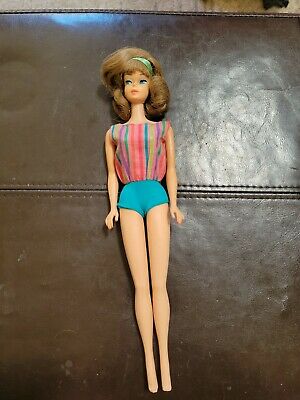 This Barbie is considerably older, dating from 1965. Dressed in bright blue hot pants and a striped top, she’s the essence of cool American fashion.

And there’s something about her that’s quite different from your average Barbie – she has legs that bend! She also has beautifully styled hair, and she’s in immaculate condition too.

All this meant that she attracted lots of attention from collectors when she came up for auction in 2022.

The starting price of $2,000 didn’t put off bidders, with eight of them battling it out to take her home. When the auctioneer’s hammer finally fell, the price had reached $3,905. 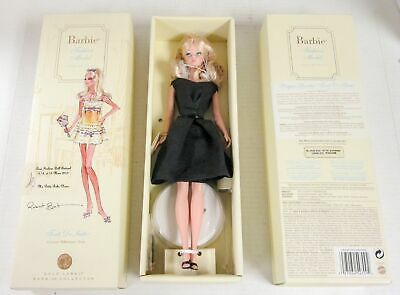 At the last minute, the head of the event managed to get 40 of these dolls. They had originally been produced to celebrate the 10th anniversary of Silkstone Barbie – a Barbie with a face designed to resemble porcelain.

The dolls were given a new outfit, made by Masterstrokes, and a new necklace, designed by Marcia Friend. A sticker was added to the back of the box – and hey presto! A new convention Barbie was born!

They were given to the favored few amongst convention attendees, and their scarcity means they’re highly prized by collectors.

This example was in very good condition, in her original box, when she came up for sale in 2022. The asking price was originally $5,000, but the seller accepted a lower offer.‘’ 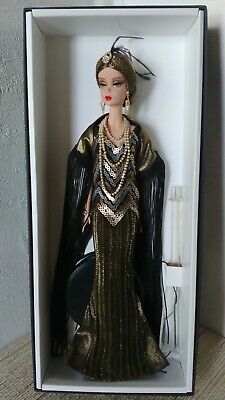 This Barbie is another that wears a 1920s outfit. In this case it’s black and gold, complete with a feathered turban, pearl necklaces and bracelet. She wears shimmering gold eye makeup and carries a black clutch bag.

She is designed as a table centerpiece, and comes with her own stand. And, like the Fabulous ’20s Barbie we met earlier, she was produced to grace the tables at the Madrid Fashion Doll Convention in 2021.

This Barbie, though, was even rarer, one of just 20 dolls ever made. This particular example was offered for sale online in 2022, and was snapped up for $5,000. 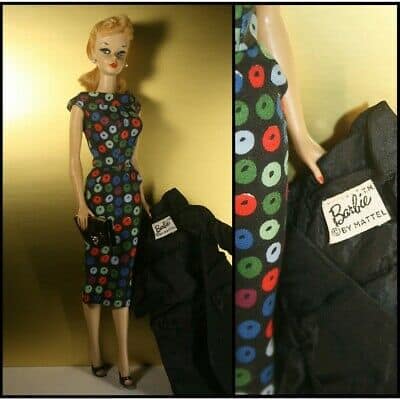 This Barbie dates from 1959, near the very beginning of Barbie history. She is the second doll ever produced, and her facial features are painted by hand. She wears a ponytail in her strawberry blonde hair and comes with multiple outfits.

Amongst them are a black dress with colored spots, a black and white swimsuit, strapless black cocktail dress, and a gold evening gown and coat. 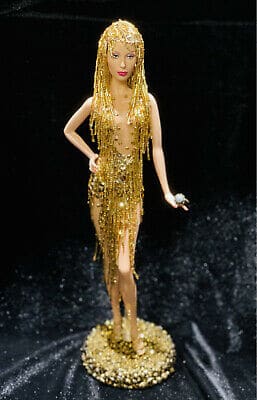 This design, showing Cher in her “Take Me Home” tour, was dressed in a sparkling gold outfit. It was intended to be a limited edition, with just 996 dolls to be produced. Her outfit is premium quality, with delicate beading and nude mesh, just like Cher’s real stage costumes.

But this version of the Cher doll never went into production. The level of work involved in creating her outfit would have pushed the price too high – even for a limited-edition doll. So this prototype is one of a kind.

That means she’s hot property for collectors. She was put up for sale online in 2022, with an asking price of $7,500. The seller accepted a lower offer. 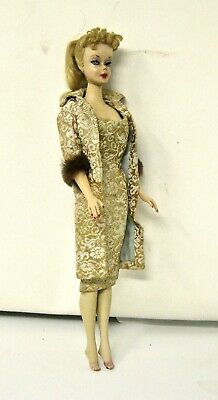 This is one of the very first Barbies ever produced, dating all the way back to 1959. She has blonde hair in a ponytail and wears a gold and white brocade dress in the style known as “Evening Splendor”.

Unusually, she came to market from someone who had bought her from her original owner, rather than a specialist Barbie collector. She was in good condition, with all her original hair and no rubs or loss to her eye paint.

But she did have some minor flaws. The polish on two of her toenails had been rubbed away. And this model originally had a copper tube in each foot. One of them is missing here.

Even so, as a piece of Barbie history, she was very attractive to collectors. When she came up for sale in 2022, the asking price was $9,000. The seller was content to settle for a lower offer. 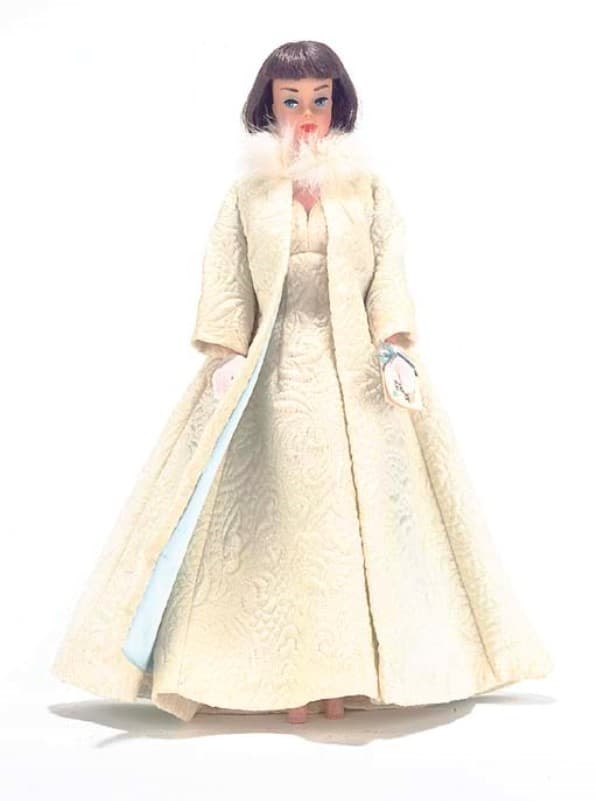 This Barbie was named “Gala Abend”, German for “evening gala”. She was the second highest selling lot at the Christies 2006 Barbie auction.

She had straight dark hair, and rather severe bangs. She was dressed in a spectacular outfit of cream quilted evening gown and matching coat with fur collar. And she carried an evening bag embellished with sequins.

This doll was only available to the European market. But she has the highly colored body favored by Japanese customers. She has straight legs, and one of her shoes had been replaced. 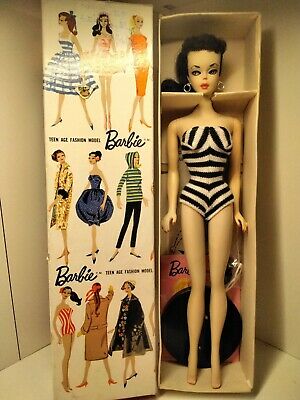 This is another of the original 1959 production of Barbies. In this case, though, her hair is brunette. And she comes with a lot of original accessories that are very hard to find.

One of the most important for collectors is her original box. The box wasn’t in mint condition – the cardboard had separated slightly at the corners, and an inscription had been written on the front. But it was nevertheless a rare survivor of over 60 years.

The doll came dressed in her original zebra-print swimsuit, black high heels, sunglasses, and silver hoop earrings. And the original pink booklet was also inside the box.

There was a stand included too, although this was a reproduction dating from 1998. And Barbie’s face had been touched up to remedy fading to her lips.

These minor imperfections aside, she remained a highly sought-after doll. And when she came to auction in 2022, she achieved a price of $10,000. 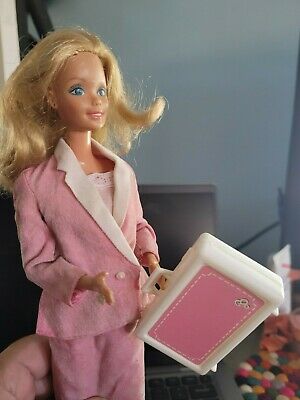 This was the first ever Business Barbie. She was a doll that sent a message that little girls could be whatever they wanted to be.

She came with two outfits – a smart business suit for office hours, and a party dress for after dark. All of them were, naturally, pink. She had a hat and a briefcase too.

She’d been played with, and she was missing her original blouse. She didn’t have her box either.

But that didn’t stop her from being an iconic doll, and a symbol of changing attitudes. It was those things that meant one Australian buyer in 2022 was prepared to pay $10,700 to own her. 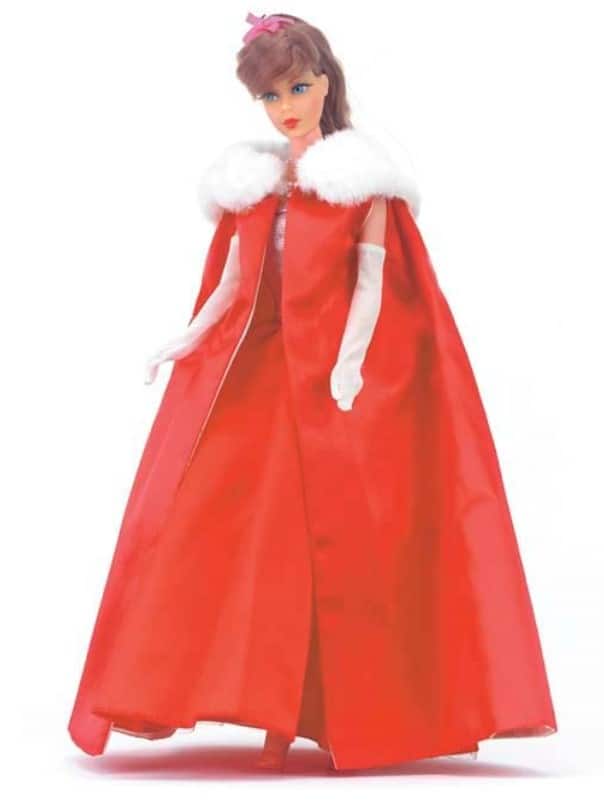 This Barbie in Midnight Red was the star of the 2006 Christies auction. She dates from 1965, and has brunette hair tied up with a ribbon. She wears a long red evening gown, a red cloak with a white fur collar, and long white gloves.

The unusual name gives a clue as to why this Barbie got collectors so excited when she came to auction. Her outfit was a rare variant color, the standard Barbie instead wearing a midnight blue ensemble.

Bidding was fast and furious, and the price when the hammer fell was $11,200. 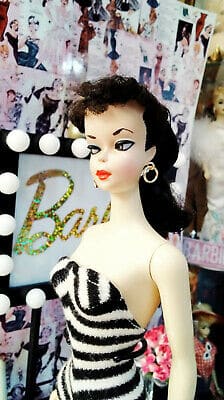 We’ve already seen one of these first ever Barbies sell for $10,000. At first glance, this appears exactly the same. She dates from 1959, she has the same dark hair in a ponytail, and the same swimsuit, accessories and pink booklet.

She comes in her original box too. And she was sold in 2022, the same year as the doll we looked at earlier. So why did this doll make $2,000 more?

There are a couple of reasons.

One is the stand. In this case, it was original rather than reproduction. And the second was that the paint on this doll’s face had never been touched up.

Those things made all the difference to collectors, and meant she netted the seller an impressive $12,000. 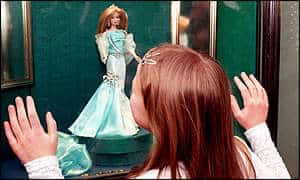 In 1999, Barbie turned 40. And to celebrate her milestone birthday, diamond merchants De Beers collaborated with Mattel on a very special doll.

“Diamond Barbie” wore a turquoise ballgown embellished with a diamond belt, diamond pin at her shoulder, and diamond ornament on the skirt. She had long earrings made of diamonds too. And all her jewelry was fashioned from 18-karat white gold.

Only one such doll was ever made. (Mere mortals could get their hands on a copy, involving a single crystal pin on the dress.)

It went on display at David Morris International, a London jewelers, throughout Barbie’s birthday month. The price tag? £50,000. That’s the equivalent of about $85,000.

That brings us to the end of our look at 15 of the most valuable Barbie dolls ever sold. We hope you’ve enjoyed learning more about these rare and collectable dolls!

Barbie charts the changing fashions – and attitudes – of more than 50 years. She’s not just a doll – she’s a part of American history.

So if you have a Barbie at home, look after her. It’s just possible she may be worth a lot of money!