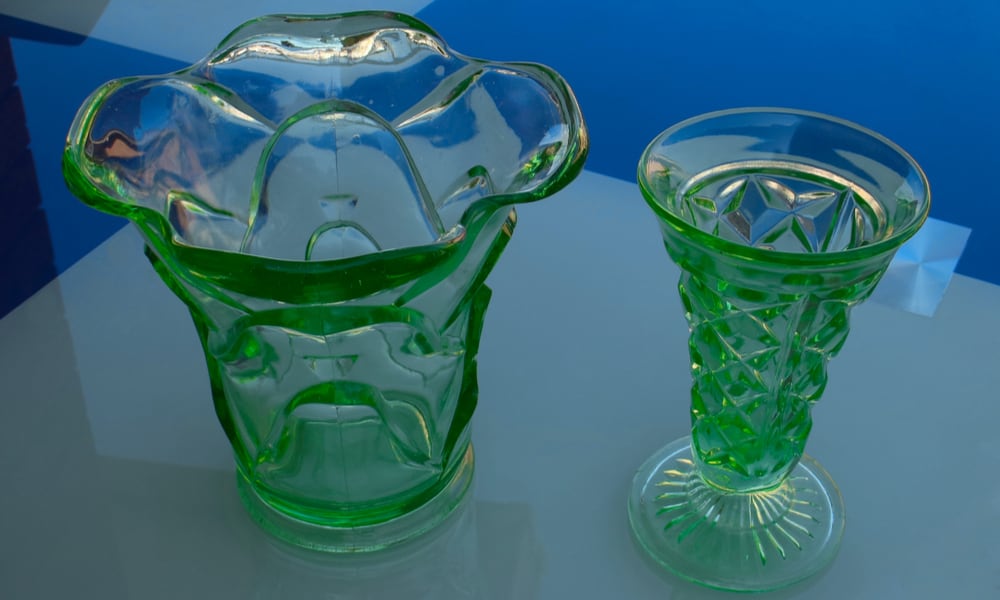 The depression of the 1930s saw household incomes plummet. Hand-cut fine glassware became beyond the reach of many families.

Enterprising glass makers turned to cheaper items, investing in new machines that could produce hundreds of pieces every hour. This new glassware was often distributed free of charge alongside other purchases. And its bright colors brought cheer to a period of economic gloom.

When conditions improved, many households discarded their depression era glass. But some people continued to collect it. And today, it’s found a whole new generation of collectors.

Despite its cost-effective origins, rarer pieces can be worth a lot of money. In this article, we’re going to focus on one particular color – green. And we’ll search out the most valuable green depression glass patterns, and discover just how much they might be worth. 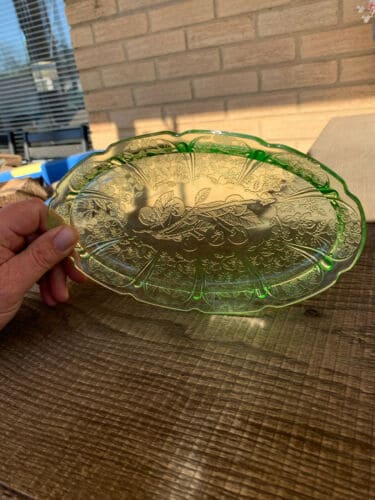 The Cherry Blossom pattern was produced by a company called Jeannette Glass. It was very popular, and items decorated with the design were made for a long time – between 1930 and 1939.

That popularity does, however, present some issues when it comes to price. Firstly, there’s a large range of items that are easy to find. And the market also includes reproduction items made far more recently.

If you’re collecting depression era glass, then, it’s good to search out a reputable dealer. They’ll be able to point out any flaws in the items – as well as explain how to spot if it’s the real thing.

But despite the pattern’s relative ubiquity, particular items are still very rare. And that makes them keenly sought after by collectors.

One such example is this lovely platter in green glass. 11-inch versions are fairly common, but this one is just 9 inches long. It was offered for sale online in 2022. The price was an astonishing $1,200, although the seller accepted a lower offer. 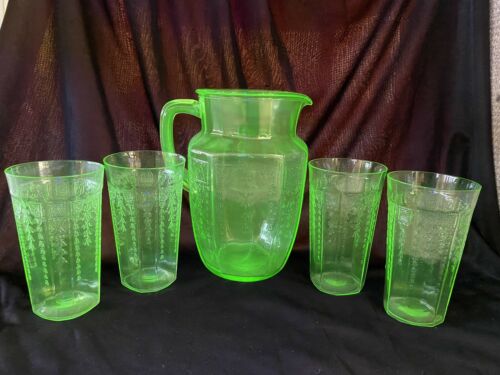 Princess was a design made by the Hocking Glass Company between 1931 and 1935. It was made in considerable numbers in green, pink, topaz and apricot.

Relatively few pieces were made in cobalt blue, though. And these fetch considerably higher prices as a result.

Finding green glass examples in good condition isn’t too difficult. We found a set of eight 9.5-inch dinner plates for $150, a pitcher and four tumblers for $125, and four cereal bowls for $110. 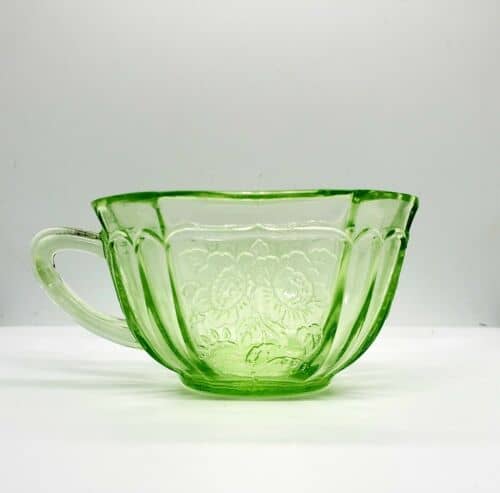 The Mayfair design is another that was made by the Hocking Glass Company. In this case, though, it’s the green items that are rarest and most sought after. The majority of pieces were made in pink and blue.

The pattern is also known as “Open Rose” because of its central design, two flowers with open petals. Even flawed examples in the rare green color can fetch high prices.

The cup in the picture came up for sale online in 2022. It had been expertly repaired in no fewer than four different places. The work was, however, such high quality that the flaws were very difficult to spot.

There was intense competition when the auction kicked off. 15 bids were received, with the price for eventually reaching $156. That’s not bad for a single cup. 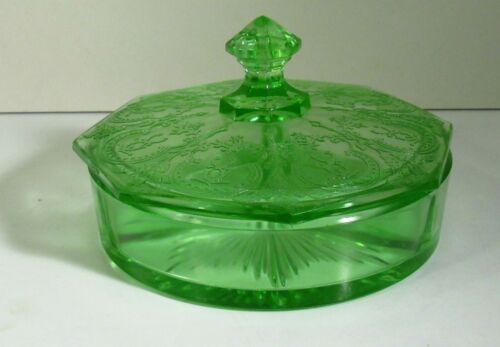 Number 612 is one of the rarest. It features an attractive design of a semicircle surrounded by flowers and swags. And the resemblance of the semicircle to something else is what’s given the pattern its nickname – “Horseshoe”.

All the different items in the range were made in green glass, with many also being made in yellow. The rarest are examples in clear (“crystal”) and pink glass.

But even in green, some items are scarce and hence very desirable to collectors. This candy dish is one such example. It’s divided into three sections, with a lid on top to protect the contents. It came up for sale online in 2022 and sold for just under $420.

Other sought-after pieces in the green pattern include the grill plate, butter dish and pitcher. 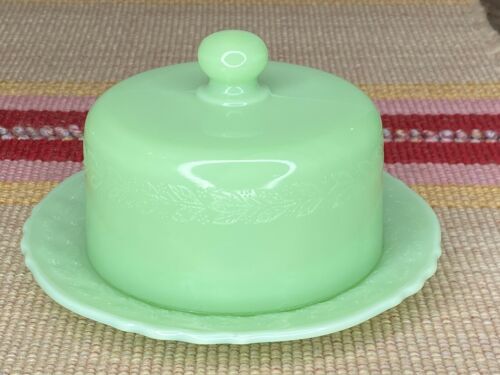 The Laurel pattern was made by McKee, a glassware company that set up shop in 1853. They were one of the first companies to make colored glass. But unlike most depression era makers, they continued to make their glassware by hand, not introducing automation until the 1940s.

The Laurel pattern was made in a range of colors, including an opaque jadeite shade named “Skokie green”. When used in dinnerware from 1931, the name was changed to “jade green”. The color, though, was the same.

Blue examples of the pattern are the rarest. But McKee also made a range of children’s dishes in the Laurel pattern with a Scottie dog in the middle. These were made in green and white, and are amongst the rarest of all depression era children’s sets.

Pieces come to the market only rarely. One set was auctioned in 2017. It included 14 pieces, two of which had been badly damaged, and sold for $340.

But there are rare pieces amongst the adult line too. This lovely cheese dish with a dome cover was sold online in 2022 for $450. 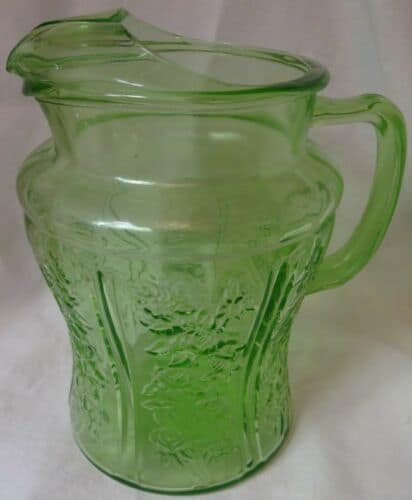 Also known as “Cabbage Rose”, Sharon was a pattern made by the Federal Glass Company between 1935 and 1939. It was one of the most popular patterns of its day, and continues to be keenly collected.

It was produced in amber, pink and green, with the latter – known as “Springtime green” – the hardest to find.

This lovely pitcher in the pattern was offered for sale online in 2022. It stood 9 inches tall and was in great condition, without chips or cracks. It sold for $375.

Another item to look out for is the cheese dish, although in this case, it’s the pink version that’s most scarce. It’s easy to confuse with the butter dish, though. Look for a raised ring on the base that holds the lid in place. If the ring is there, it’s a cheese dish.

If you find a pink one, you can expect to pay around $1,500. Be careful, though – there are some fakes on the market in all shades. 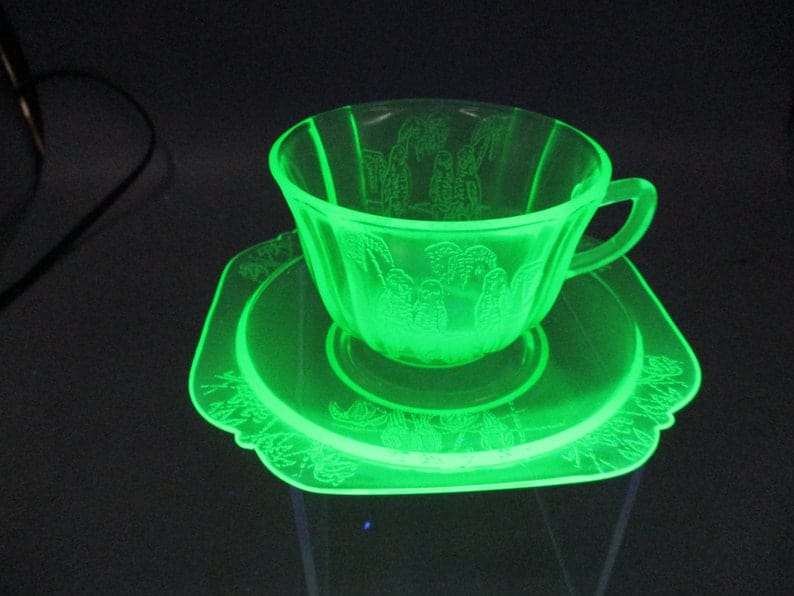 The Sylvan pattern was another made by the Federal Glass Company. It features two large parrots, resulting in many people referring to it as “Parrot pattern”. And it was made for only two years, 1931 and 1932, making it one of the rarest patterns around.

Finding full sets is very difficult. Sylvan collectors will usually find they have to track it down piece by piece.

This lovely cup and saucer was available for sale at the time of writing for about $70. And as always, some pieces are even rarer than others. A pretty butter dish with domed lid sold online in 2022 for $400. 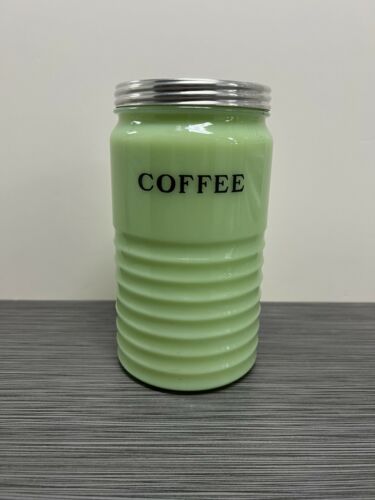 Light Jadeite depression glass was made by the manufacturers Jeanette. They started production in 1900, in a Pennsylvania town of the same name. Back then, they were making bottles. But by the 1920s, they had turned their attention to dinnerware.

Their Light Jadeite glassware was a lovely opaque pale green shade. Items included beverage sets like this coffee canister. Matching tea and sugar canisters were also produced, with the sugar containers the rarest.

This coffee canister was in great condition when it came up for sale online in 2022. It achieved a price of $300. 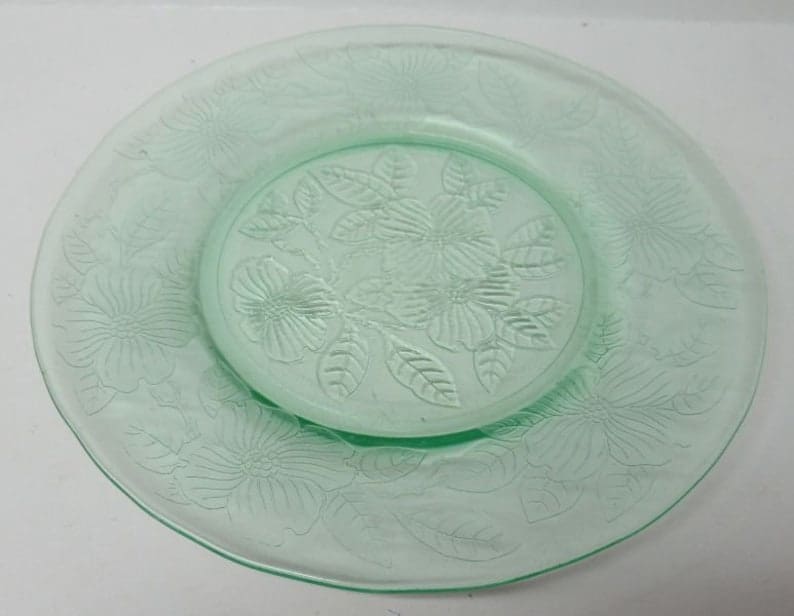 Apple Blossom is the name given to the green version of the Dogwood pattern produced by glassware company Macbeth-Evans. There’s also a pink version, known as Wild Rose.

The pattern was made for four years, between 1930 and 1934. It features a bold and distinctive design of large flowers.

A full set of dinnerware was produced carrying the pattern. You can pick up an 8-inch salad plate like the one in the picture for about $20.

But some pieces are rarer. If you find a coaster, snap it up – they’re highly prized by collectors.

Floral is another bold pattern, this time by Jeanette. It features large flowers with five petals and sprawling leaves. It’s sometimes referred to as “Poinsetta”, although the leaves aren’t right for that flower.

The attractive design and pleasing shapes mean this would pass for high quality cut glass at first sight. Look closer, though, and you’ll find the small flaws that are typical of depression era glass – and part of its charm.

Today, some pieces are rare and considered highly desirable by collectors. These include the cream soup, which sells for around $750. Other scarce items include candlesticks, a compote and an ice tub. There are rare homewares in the pattern too, including vases and even lamps. 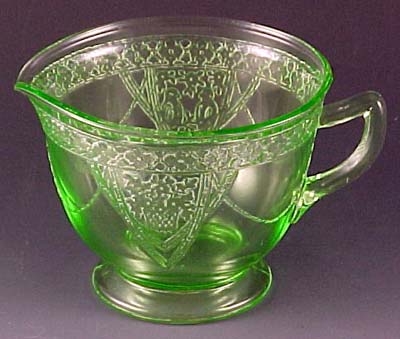 Georgian is a mold-etched pattern by the Federal Glass Company. It’s also known by the nickname “Lovebirds” because of the birds that feature (alongside baskets) in the design.

Almost all Georgian items were made in green glass, although there are a few clear and amber examples too.

Most of them can be picked up at a reasonable price: expect to pay around $10 to $18 for a cup or sherbet. Dinner plates are more expensive at between $35 and $60, while serving bowls are around the $70 mark.

Drinking glasses are the most expensive of all, as survivors are scarcer. A single tumbler will cost between $100 and $125. 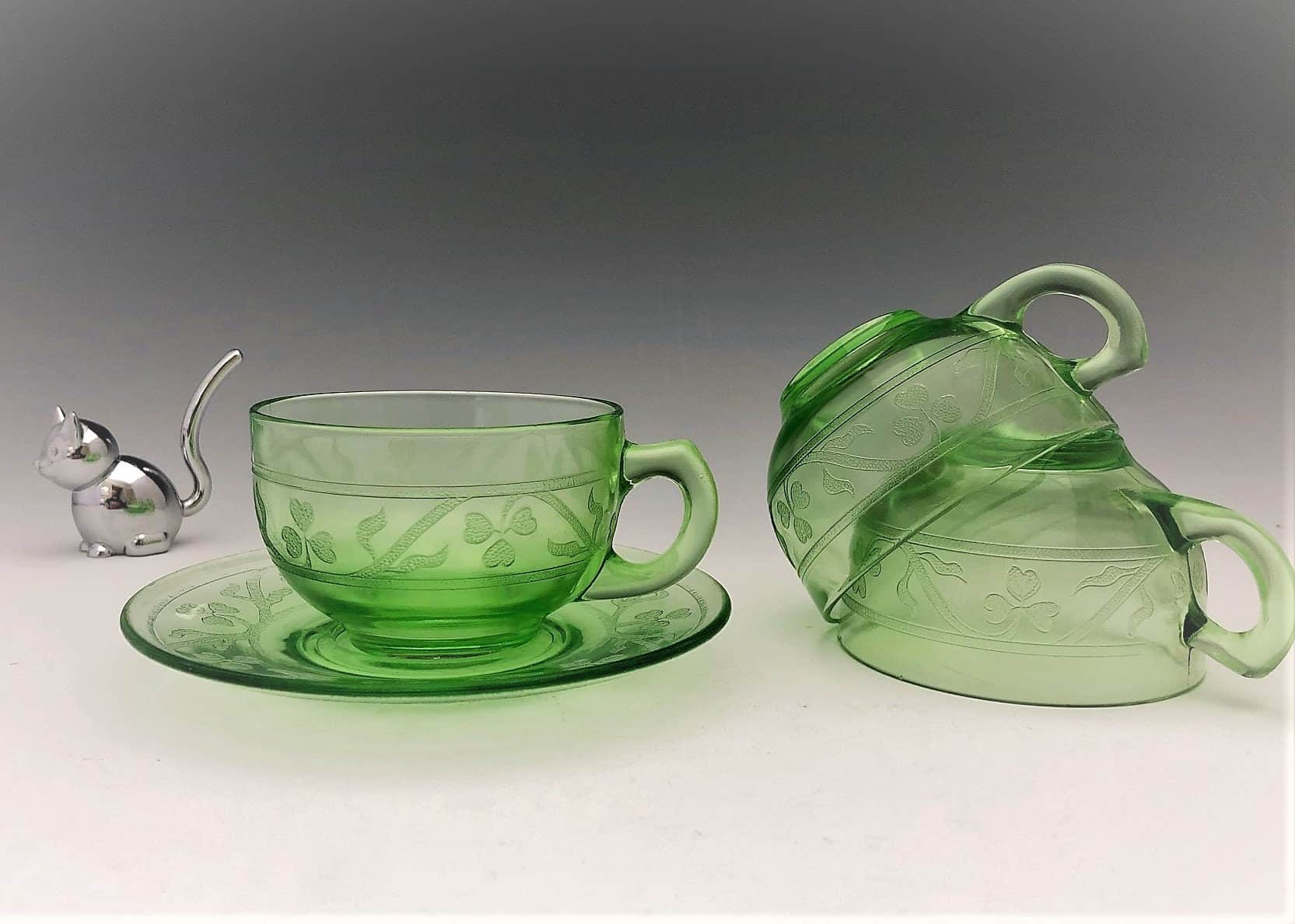 The pretty Cloverleaf pattern was made by Hazel Atlas in a range of different colors. These included yellow, pink, clear and even black. But fittingly for a leaf-based design, green is by far the most common.

It’s still a rare pattern, however. Indeed, one specialist retailer of depression era glass had stocked only one saucer in her 18 years in the business!

But the good news is that, when you find it, it’s surprisingly reasonably priced. We found a cup and saucer for $15, a dessert serving bowl for $50, and a drinking glass for $54. 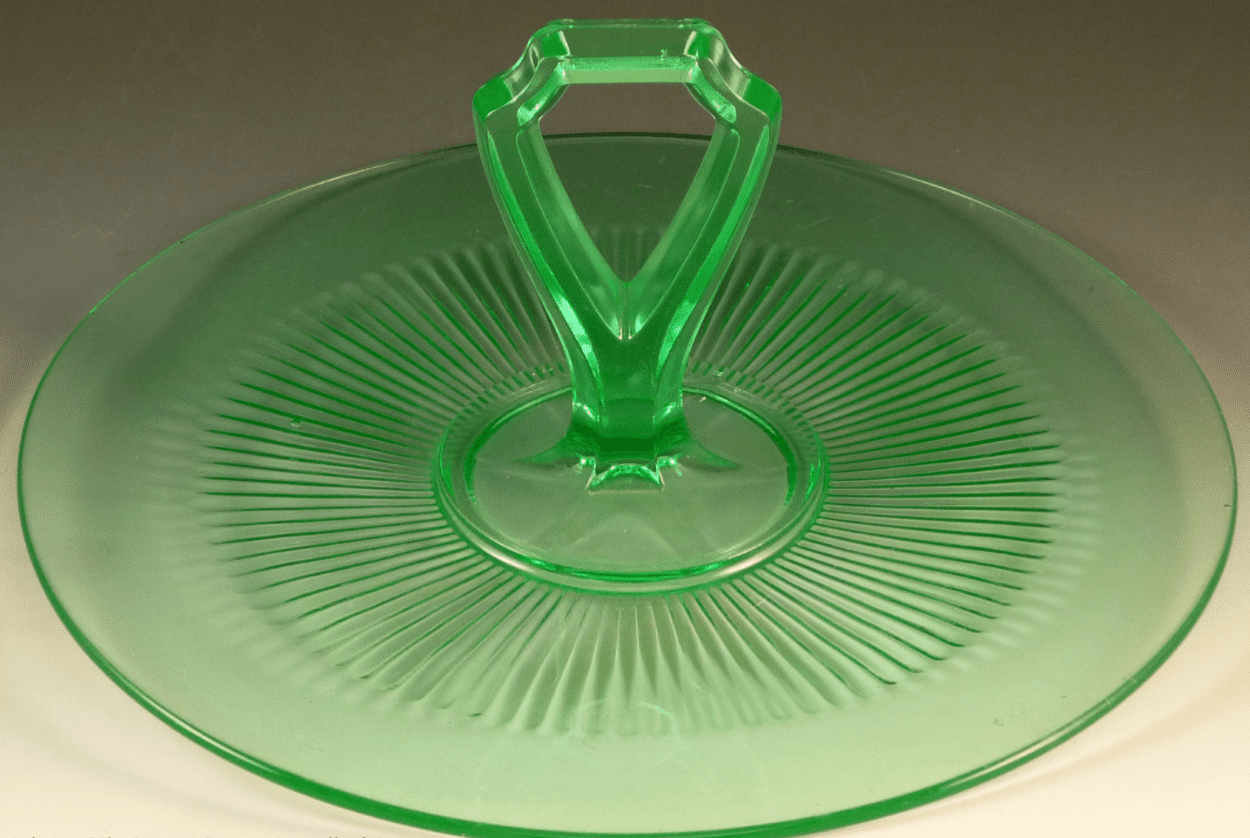 Adam’s Rib was a pattern made by a company called Diamond Glass. The pieces are particularly nice quality, with smooth seams and ground rims on many bases.

It was made in a variety of different colors, including green, blue and amber. Blue is the rarest, followed by green and pink, with amber the most common. Some pieces have enamel or gold trims too.

Prices are nevertheless fairly modest. The lovely server in the picture can be yours for around $45, a dinner plate is the same, while two tumblers cost around $50.

But make sure you check listings carefully. The pattern is sometimes confused with Fine Rib or Homespun, both made by Jeannette.

Made between 1930 and 1934, Cameo was the third most popular pattern ever made by the Hocking Glass company.

Hocking perfected mass production techniques in the 1930s, able to produce an astonishing 90 pieces of glass every minute.

As a result, there’s plenty of it around. But for collectors, limited-run items and rare combinations of colors and patterns are still highly desirable.

That’s the case with this beautiful green glass sandwich server in the Cameo pattern. While green pieces are relatively common, this particular item is very scarce indeed. It came up for auction in February 2016, and bidding reached $4,250.

That might sound like a lot of money – but with an estimate of between $5,000 and $6,000, it wasn’t enough for the seller. The reserve wasn’t reached, and the lot remained unsold. 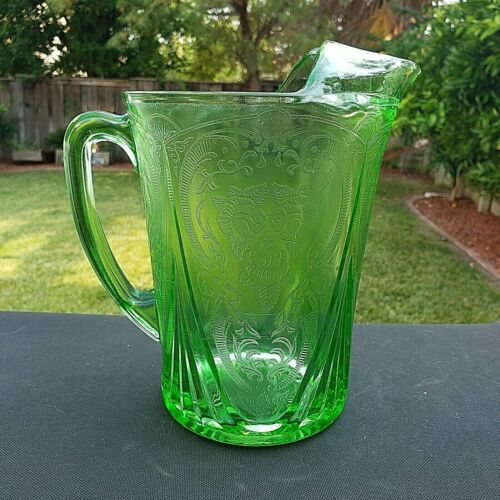 One of the most famous patterns in depression era glass is Royal Lace, made by Hazel Atlas from 1934 to 1941. It was produced in a range of different colors, including green, but only the clear glass continued throughout the period.

The rarest and most expensive of Royal Lace shades is blue. A cobalt blue nut bowl in the pattern recently sold via an online auction site for $1,200.

But examples in green glass are beautiful too. And while the price gap between green and blue is narrowing, they can usually be purchased more cheaply.

That brings us to the end of our look at some of the most valuable green depression glass patterns out there. When they were first made, these lovely pieces brought a splash of color into homes at a difficult time. And they can do exactly the same thing for us today.

We hope you’ve enjoyed learning more about them. And if you already love depression era glassware, good luck in finding the perfect pieces for your collection!