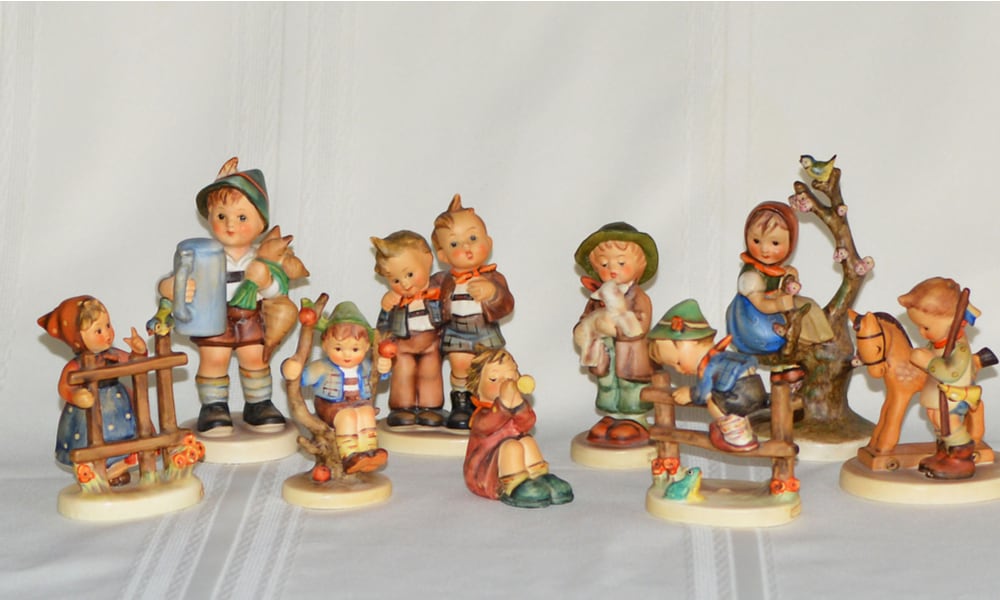 Are you considering acquiring or selling your Hummel figurines?

Hummel figurines are quite popular among collectors and non-collectors.

These antiques have an inspirational history, and you’ve got to admit that each figurine elicits so much nostalgia.

When Maria Innocentia drew her now-famous sketches, little did she know that the characters would travel worldwide and be a source of such immense charm and happiness.

It has been many years since M.I.’s sketches were first transformed into porcelain figurines. Some of the original figurines are still in circulation among collectors and non-collectors. Many of these are quite rare and valuable, but some are not worth much.

Some manufacturers from Asia have been reproducing and selling Hummel imitations. These copy-cat figurines are mostly valueless or low-value. This is why it is important to know how to identify original M.I. Hummel figurines.

most expensive Hummel Figurine Worth Money 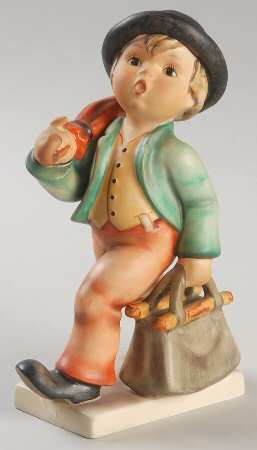 The Merry Wanderer figurine is one of the most outstanding in the M.I. Hummel range. It features a young boy holding a bag in one hand and an umbrella nestled over his right shoulder. The young one seems to be merry as he skips along in the fields.

This figurine has been reproduced many times and comes in more sizes than any other Hummel figurine. In 1971, Gerhard Skrobek created a six-foot model specially made to celebrate Goebel’s 100th anniversary.

Skrobek created another 8-foot model in 1987, which was placed at the entrance of the former Goebel Collector’s Club headquarters in New York.

Merry Wanderer is very collectible, and in addition to its rarity, it is one of the most valuable Hummel figurines. 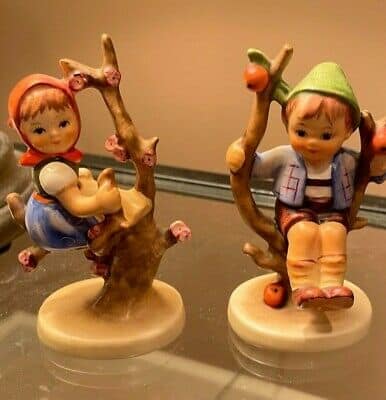 The Apple Tree Boy and Apple Tree Girl is one of the most sought-after Hummel figurines. The antique features a boy and a girl, each seated on an apple tree branch. The boy is seated facing forward. The girl faces toward the right while the rest of her body faces toward the left.

The two figurines complement each other and are often sold together for balance. This model comes in three versions: X inches, 6 inches, and 3.5 inches. The last two variations have a market value running in the hundreds of dollars, while the X inches version, for example, #142/X1, can fetch many thousands of dollars.

There are life-size 32-inch Apple Tree Boy and Apple Tree Girl figurines. These are, however, rare, and collectors are keen to scoop them off the market. 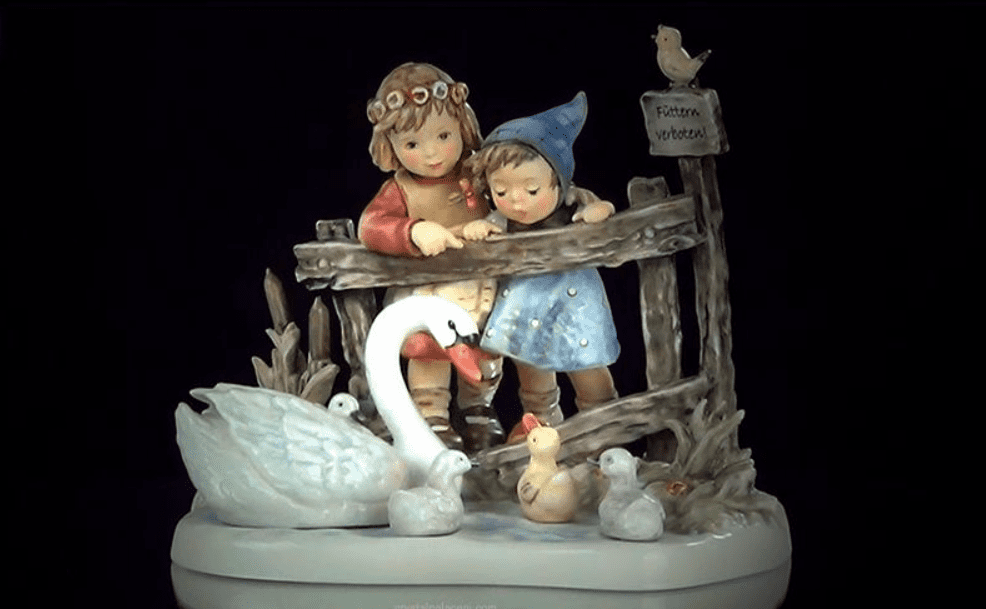 Forever Friends features two little girls leaning over a fence, watching a white swan with her three little ones. A yellow fledgling is part of the brood of swans.

Master sculptor Reinhold Unger first modeled this Hummel figurine in 1940. The initial variety featured a red terra cotta finish with the TMK-1 crown trademark incised at the bottom. Very few of these initial models were produced, making this figurine rare and of a higher value.

A limited-edition of the figurines was released in the market in 2007. In fact, only 1,000 of these pieces were produced.

Forever Friends figurines that come with an identification plaque are even more valuable, as is the case with the original models. 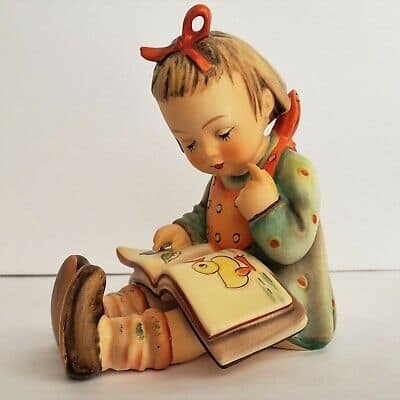 The Bookwork is among the earliest Hummel figurines and a collector’s favorite. Aside from its old age, the amount of detail in this model makes this figurine attractive and highly sought after.

The figure features a young girl seated with her legs stretched out and her hand on her cheeks. She looks keenly at a painted book with a duck and a flower. The girl wears a green dress with an orange bib/apron and a matching orange bow tie.

This figurine is a TMK-1 model and is part of Maria Innocentia’s autobiographical series featuring the late artist’s interest in art and knowledge. The first Little Fiddler figurine was created in 1935, and a limited edition of only 50 pieces was produced again in 1985.

These initial figurines stand at 7¼ inches high, and at the time of production, Goebel painted their base with gold-colored paint.

The Little Fiddler is a close variation of the Puppy Love figurine. But, it doesn’t feature the adorable dog. Instead, it is just the little boy looking at his right shoulder while playing the violin.

These original, limited edition pieces also have a backstamp written ”50” showing that the Little Fiddler was produced to celebrate the 50th anniversary of M.I. Hummel figurines.

The production of a limited edition makes the Little Fiddler a rare and high-value Hummel figurine. 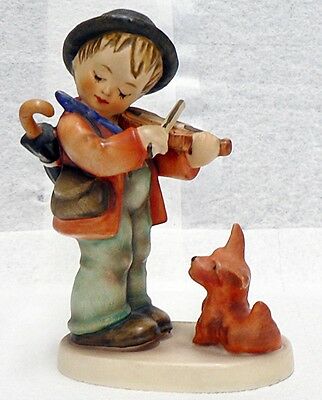 The Puppy Love Hummel figurine was first modeled by Arthur Moeller in 1935, making it a TMK-1 model.

The figure showcases a standing boy playing the violin for his pet dog standing at the boy’s feet. The small dog looks up at his owner with cocked ears as he adores his owner and intently enjoys the music.

A few of the early models showcased the boy’s head tilted at a slightly different angle, and he also did not have a tie. These particular models were produced as limited editions, are extremely rare, and are valued between $3,500 and $4,000.

Among the initial Puppy Love samples, there were some that Goebel made that came with an attached pot. These samples are extremely rare too and, if found, would be valued in the $4,000-$5000 range.

Models produced in the 1950s had a few additional features. For example, the boy wears a bow tie and looks down at his right shoulder instead of looking straight at the violin. 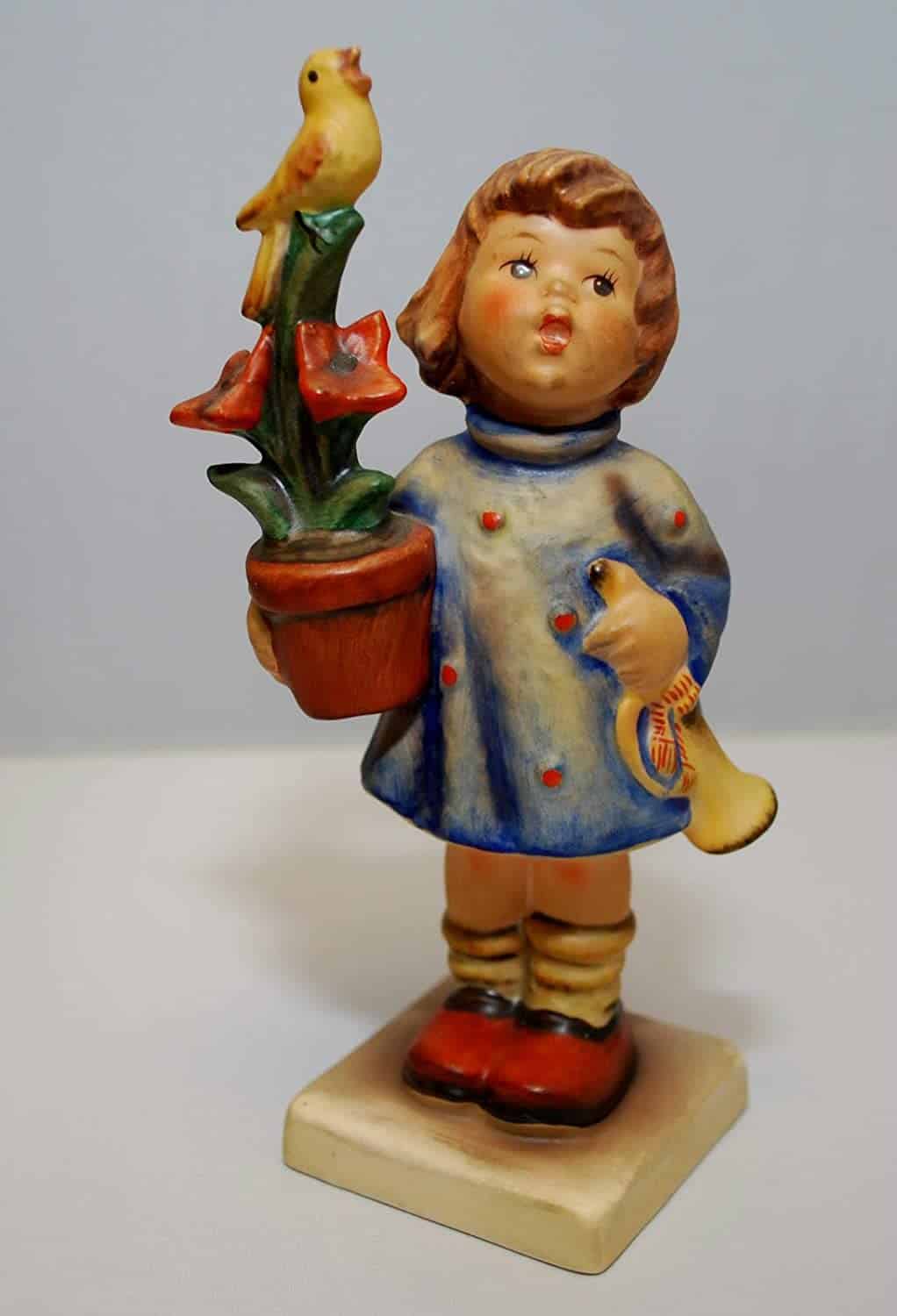 Reinhold Unger first created the Congratulation figurine in 1935. The early models were initially known as ‘I Congratulate,’ and the girl did not have socks.

The young girl wears a blue button-down dress and brown shoes in this celebratory figure. She holds a pot of bright yellow flowers atop which a hummingbird sits. The little girl also holds a horn in her left hand, reflecting the celebratory mood.

In 1971, master sculptor Gerhard Skrobek remodeled the original figurine, adding socks and changing the girl’s hairstyle. In this newer version, the horn’s handle is backward facing.

The Congratulations figurine without socks is marked TMK-2 and comes with a full bee trademark, while the newer version features a TMK-6 but doesn’t have the bee trademark. 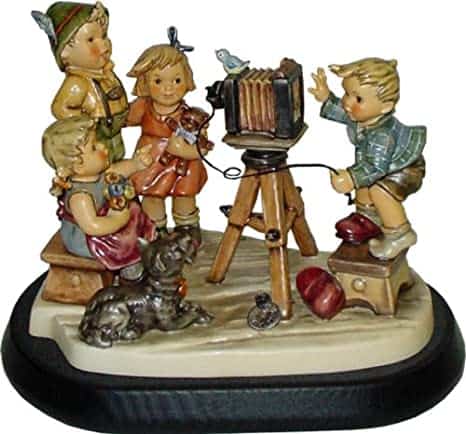 Picture Perfect features a boy with a camera taking a group photo of his three friends together with their toys and pets. It is one of the most recent figurines, molded in 2000 by master sculptor Helmut Fischer.

Only 2,500 limited edition Picture Perfect figurines were produced worldwide. A few artist models were also made. The original pieces feature a porcelain plaque and wooden base with a 2000 copyright date and TMK-8 trademark on the figurine.

Despite being among the most recent M.I. Hummel figurines, the fact that just a few of them were produced makes Picture Perfect quite a high-value antique. 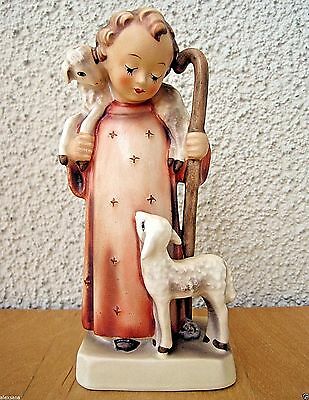 Reinhold Unger created the original version of the Good Shepherd in 1935. The initial factory sample actually features the shepherd boy in a light blue instead of a brownish gown.

This figurine showcases a young boy holding a herding cane in one hand while caring for his lambs, one of which he carries over his shoulder while the other one looks on.

The standard Good Shepherd figurine stands at 5.75-6.25 inches. The larger versions are about 7.25 inches tall, but these are extremely rare as their production was discontinued. The Ring Around the Rosie is one of the largest pieces in the M.I.Hummel line of figurines. The larger pieces are generally popular and have a higher value.

This particular one consists of four small girls playing the classic Ring Around the Rosie game. The TMK-2 and 3 pieces, which are the older versions, are between 6 ¾ inches to 7 inches, but later versions were 6¾ inches tall.

Although sculptor Gerhard Skrobek designed the figurine in 1957, it wasn’t until 1960 that the piece was manufactured for sale.

The Ring Around the Rosie was among the pieces produced for sale to honor the Hummel figurine’s 25th anniversary.

Some Ring Around the Rosie figurine models feature Goebel’s full bee logo, but these are rare and will typically only be available in the TMK2 to 8 range. 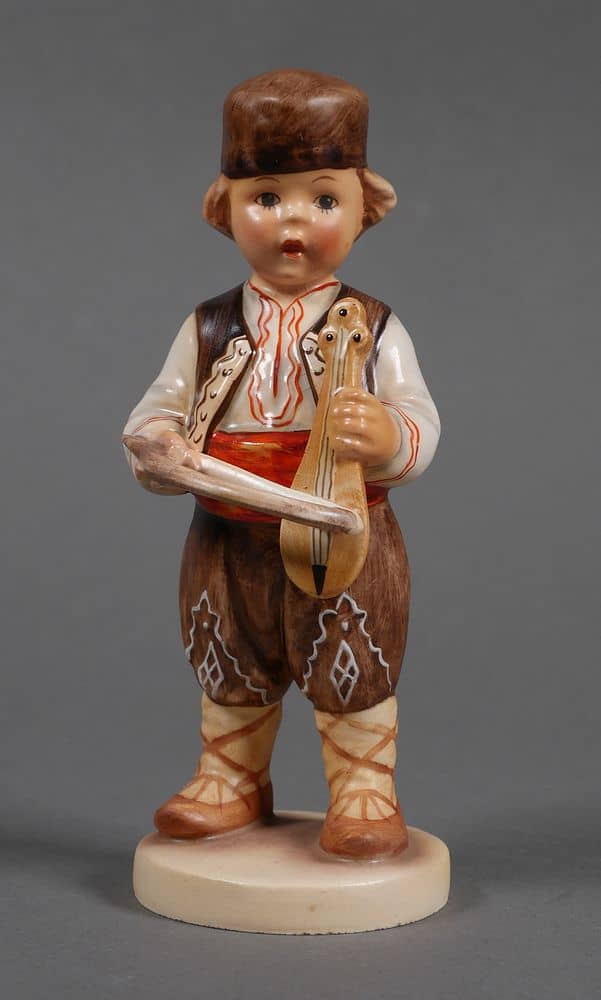 He also sports an orange waist band and brown shoes. The boy is also shown playing the gusle, a string instrument local to Serbia.

Reinhold Unger created the Serbian Boy figurine as part of the International series. The Adventure Bound figurine belongs to the Group figurines that M.I. Hummel sketched. Group figurines feature more than one person and, like all other models, have an underlying theme and convey a specific message.

The popular Adventure Bound comprises six characters holding lanterns and spears in a forward-facing pose as if hunting for something.

There are several variations of this figurine, each with great detail but all conveying the same theme.

The oldest versions of this figurine with a TMK-1 trademark are the most valuable and a collectors’ favorite. 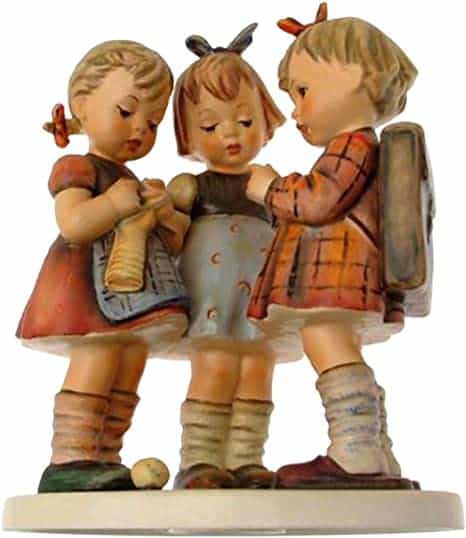 Master sculptor Arthur Moeller designed the School Boys and School Girls figurine in 1937. Initially, the figurines were known as Prime Girl and Little Scholar and School Days and are one of the most prized primarily due to their old age.

The figurines feature a group of little school boys and girls separately, where they are gathered around, chatting and carrying their school supplies.

The School Boy and School Hummel figurines are usually bought together for aesthetics. The earlier TMK-1 versions featured little girls in orange-colored skirts and blouses. In later models, the girls wore dark-colored blouses, while in others, they were adorned with a red dress and darker-colored socks. 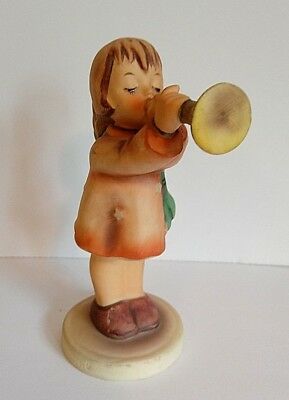 This figurine celebrates the themes of innocence and childhood that were dominant in Berta Hummel’s works; it also conveys a connection with religion, something the artist held dearly.

The Joyous News figurine was first produced in 1935 by Reinhold Unger before changing its name to Little Gabriel in 1947. First molded by Reinhold Unger in 1938, this figurine was initially named “At the Wayside’’ and later renamed ‘’Devotion.’’

Worship showcases a young girl seated at the foot of a tower praying. A statue of a religious figure overlooks her. And the leaves of a palm tree peep from behind the tower. In one hand, the girl carries a basket showing she stopped on the wayside to worship and say a prayer.

The white-glazed models are quite rare and are some of the most valuable. Older models of the figurine feature an M.I. Hummel trademark on the base’s back, while in newer models, the trademark can be found at the back of the shrine.

Hummel figurines are simplistic and charming, conveying childhood innocence while also capturing the power of spirituality.

These figurines are more than just cute statutes; some are worth some money. Admittedly, many Hummel figurines are pretty to look at but don’t hold any more value than their aesthetic appeal.

I hope this list helps you identify the most valuable Hummel figurines, whether you are looking to sell or collect some yourself.