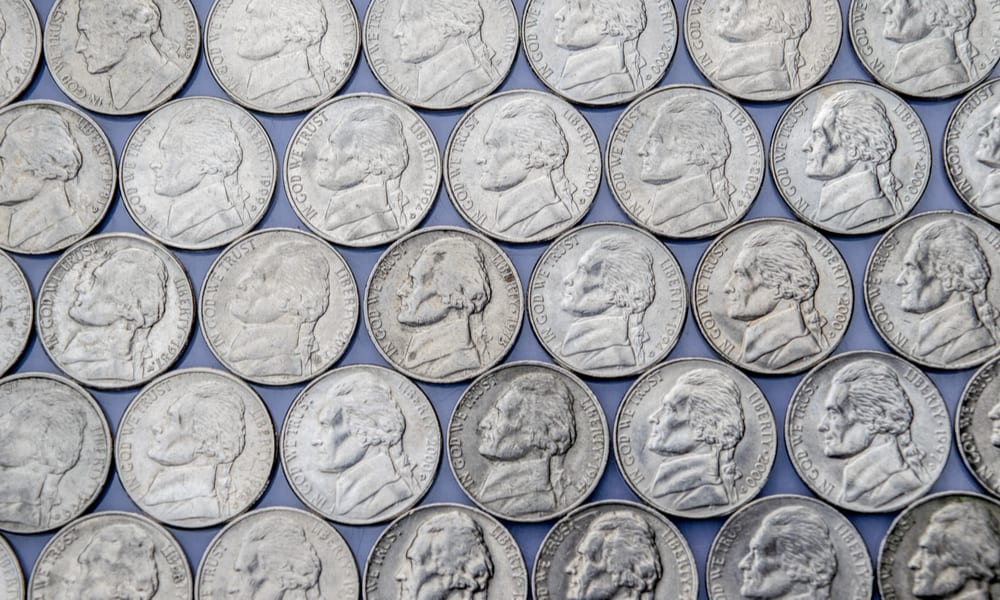 Since 1938, 5 cent coins in the USA have been Jefferson nickels. That means there are lots of them around! But if you think that means none of them can be worth more than their face value, you’d be wrong.

Surprisingly, a number of these coins can be worth serious money. But which ones – and why?

That’s what we’re here for find out! Join us, as we take a tour of the 16 most valuable Jefferson nickels ever to have come to the market.

Most Valuable Jefferson Nickels Worth Money 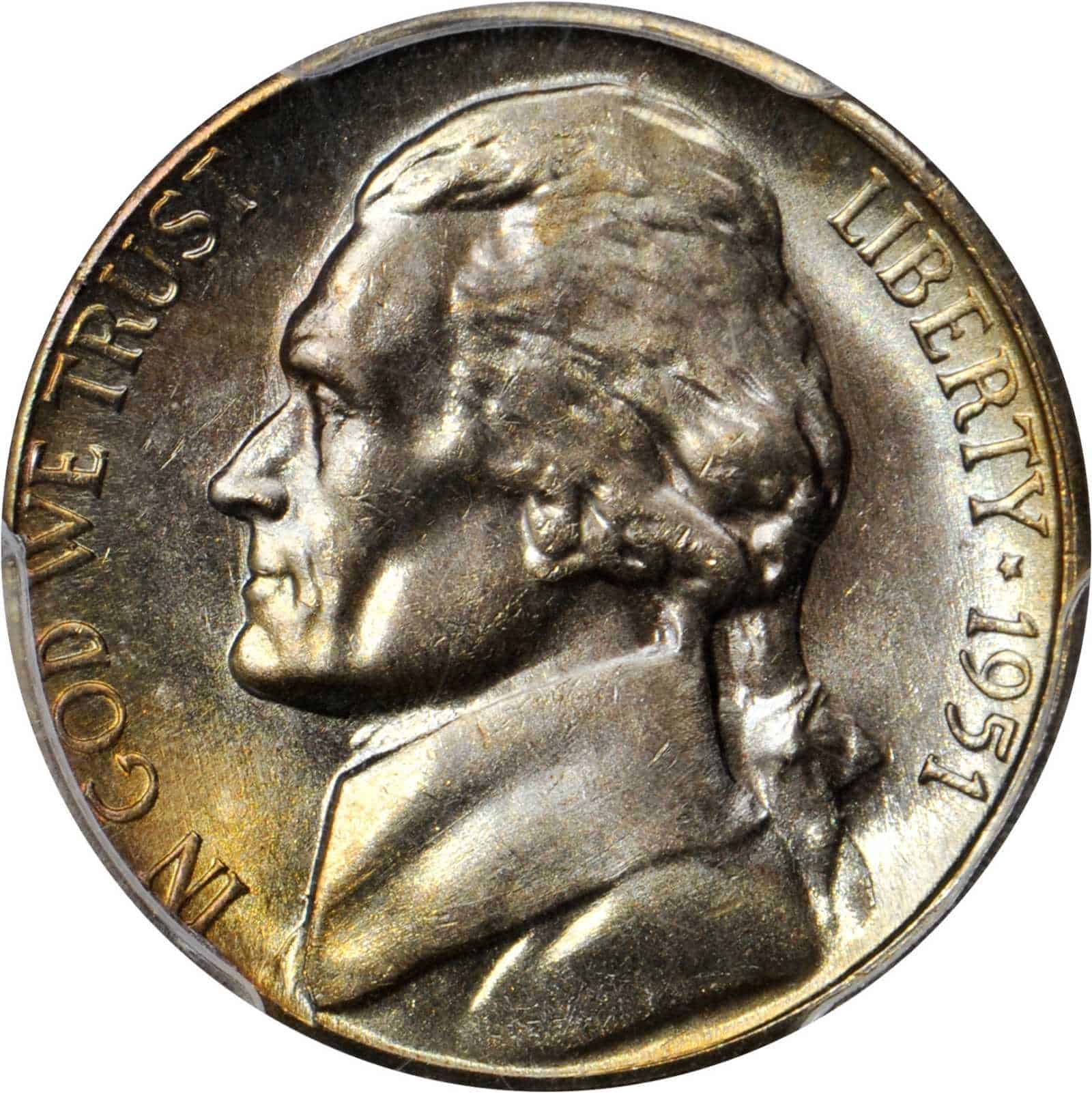 Almost 8 million Jefferson nickels were minted in 1951. So what was it about this particular coin that saw it fetch big bucks when it came up for auction?

Well, the reverse of the coin bears the image of Monticello, the foremost of the plantations owned by Jefferson. The building has six steps in front of it. In most of the original strikings, the lines demarcating one step from the next are fuzzy.

Nickels where all the steps are clearly defined are designated FS, for “full steps”. And they’re considerably rarer and more collectable than others.

This example from 1951 was produced in San Francisco. It was graded MS67 by the independent certification body the PCGS, the Professional Coin Grading Service.

MS means the coin is in mint state – i.e. it’s never been circulated. And the 67 refers to the quality and condition. The higher the number, the better the condition, with 70 awarded to a perfect coin.

Mint state coins from 1951 are relatively common in grades up to MS65. But versions with the full steps are far harder to find. The combination of excellent quality and full steps saw this coin make $18,600 when it was sold in October 2018.

This coin from 1941 is a proof – a coin that was crafted to be particularly high quality. Proof coins are usually targeted at collectors. And in 1941, nearly 19,000 Jefferson nickel proofs were minted.

But this is another case where finding the best quality examples is more difficult. There are over 150 specimens graded PR67. But there are only three coins known at PR68, and none at higher levels. This one has iridescence on both sides of the coin, giving it a particularly attractive appearance.

It came up for sale in 2013 and attracted lots of interest from bidders. When the hammer fell, the winning buyer paid $18,800, including the buyer’s premium, to add it to their collection. 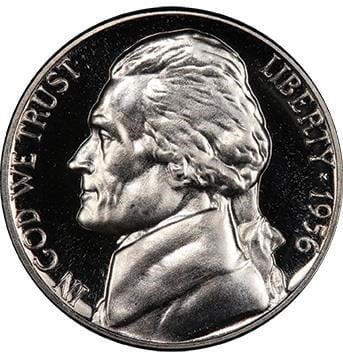 This 1956 coin is perhaps the finest example of its kind. It was graded PR69 DCAM by the PCGS – meaning it’s a proof coin one point away from being perfect.

There are only four coins of this quality certified by the major coin grading services. And no finer examples have ever been found. 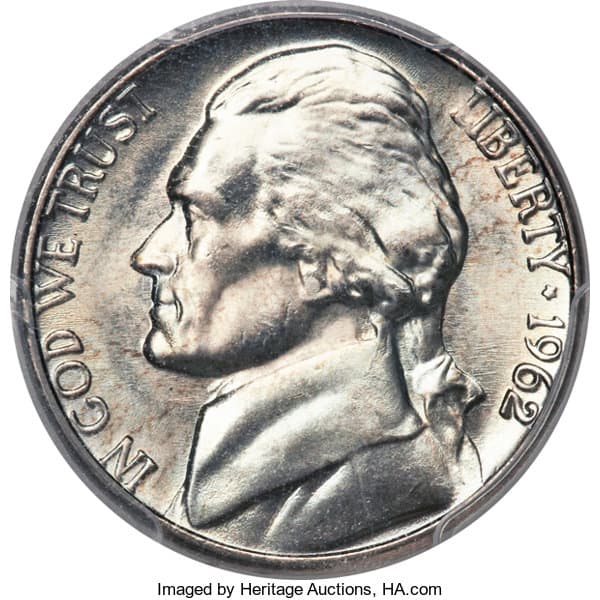 The 1962 issue of the Jefferson nickel doesn’t usually get collectors very excited. 100 million such coins were produced. And with such numbers, it’s not surprising that many show signs of the die having eroded.

That’s the case with this coin too, which features what are known as “flow lines” from the die. But what’s special about it is the quality of the strike, which has produced five clear steps on the reverse.

It’s grading of MS67+ is the highest ever awarded to a 1962 nickel. And it’s the sole example at this grade. 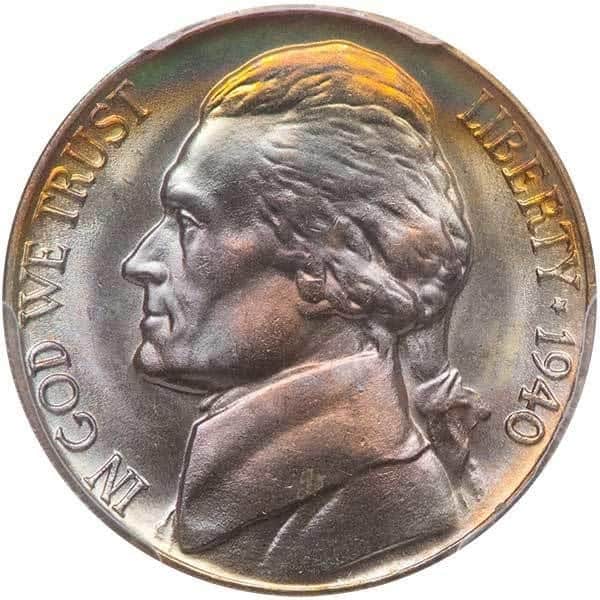 This coin was minted in Denver in 1940 and it’s another case where condition is everything. This one was graded MS68 by the PCGS. That means it’s been cleanly struck, with good detail and only a handful of small flaws. And any flaws that exist don’t affect the main design.

It’s also got the full steps designation, making it a cut above standard coins. And it’s very attractive – having what collectors call great “eye appeal”. There’s a range of different colors on the metal on both sides – gold, ice blue, and rose pink.

In terms of its quality, it’s one of a kind. No other Jefferson nickels from this year have achieved the same grading. And there are none finer. 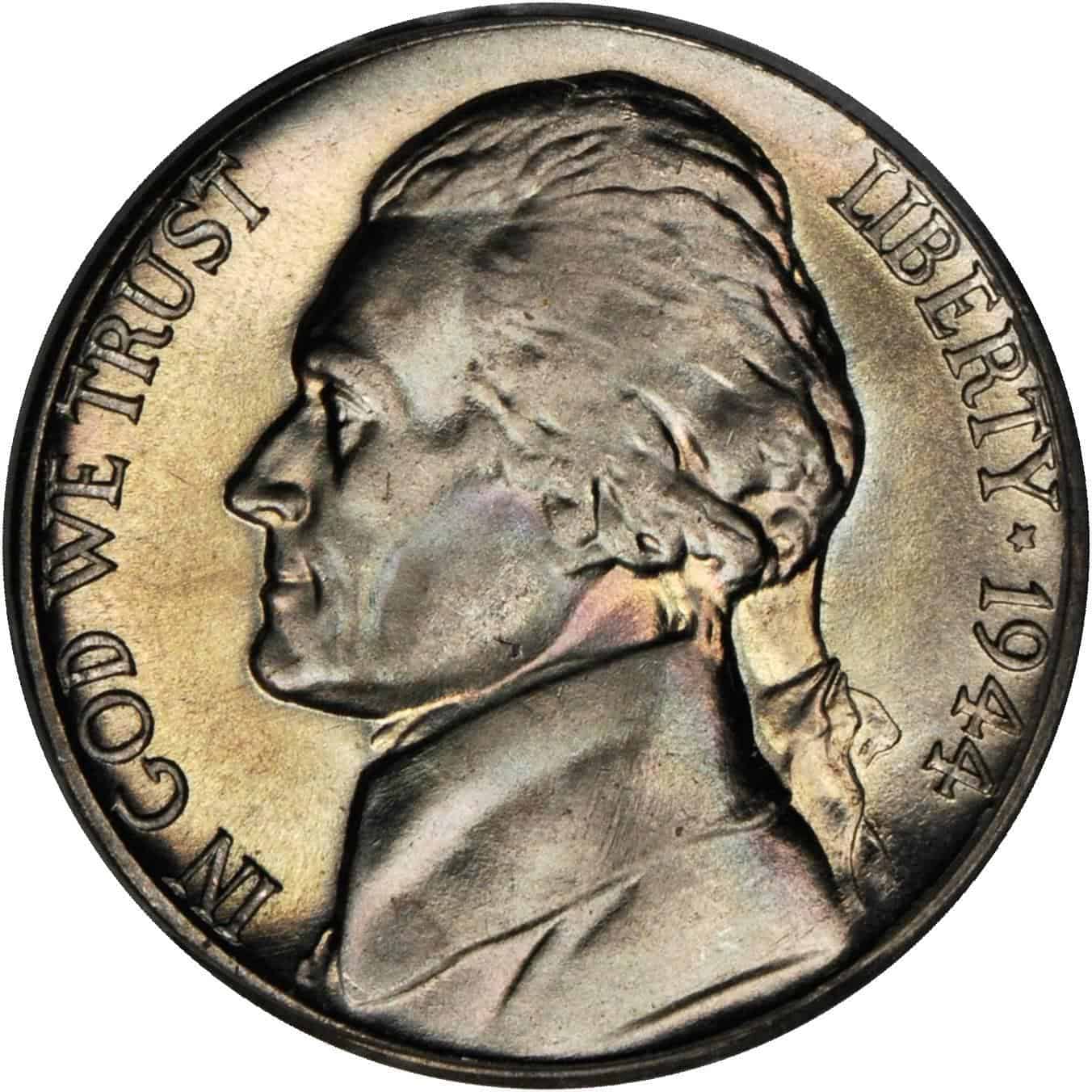 This Denver minted coin dates from towards the end of the Second World War. It’s graded MS68 by the PCGS and is another specimen with the full steps designation.

There are only two such coins from that year known to exist. And no examples of finer quality have ever been found.

So when this one came up for auction in August 2012, there were plenty of buyers hoping to secure it. After hot competition, it eventually sold for $22,325. 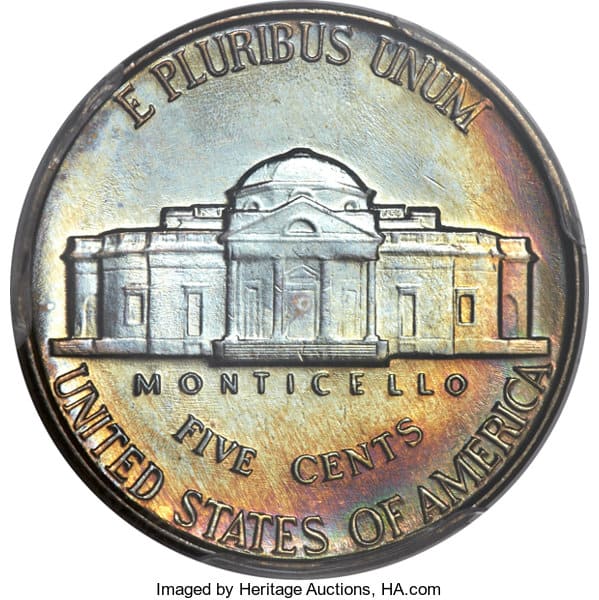 The mint chose to produce two different types of Jefferson nickel in 1939, with different dies for the reverse sides. One used the same die used for coins in 1938. The second used a new design, also used the following year.

This example uses the 1940 reverse design. This version had straighter steps on the Monticello building and generally sharper detail.

The reverse of 1938 is the scarcer of the two examples. But this 1940 reverse specimen is excellent quality, graded MS68 by the PCGS. It also has the full steps designation. And it’s the sole MS68 version known to exist, with none finer. 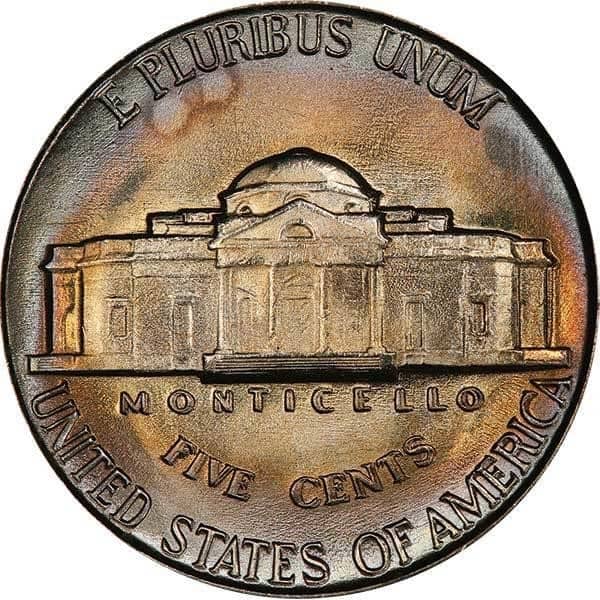 This 1939 coin is graded MS67 and has the full steps designation. But it’s not just this that marks it out from the crowd.

The reverse shows a double image. Both the word “Monticello” and the “five cents” have double lines.

This kind of mint error is rare, which makes coins like this highly collectable. Three such Jefferson nickels were known to exist from 1939, but this one was the highest quality example. 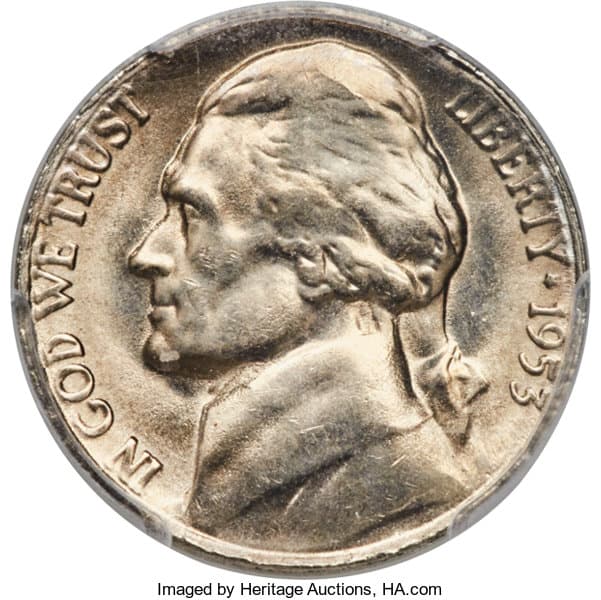 1953 Jefferson nickels are unusual beasts. The dies that year were particularly worn, so full step examples are rarer than hen’s teeth. In fact, the PCGS has certified only 24 such specimens at all grades.

Only three of those 24 were high enough quality to be considered “Gems”. And this MS65 example is tied in second place, behind one MS66 specimen.

When it came up for sale at coin specialists Heritage Auctions in January 2019, it was the first time they’d offered a 1953 Gem. Anticipation was high, and there was plenty of competition amongst bidders. The final sale price was $24,000. 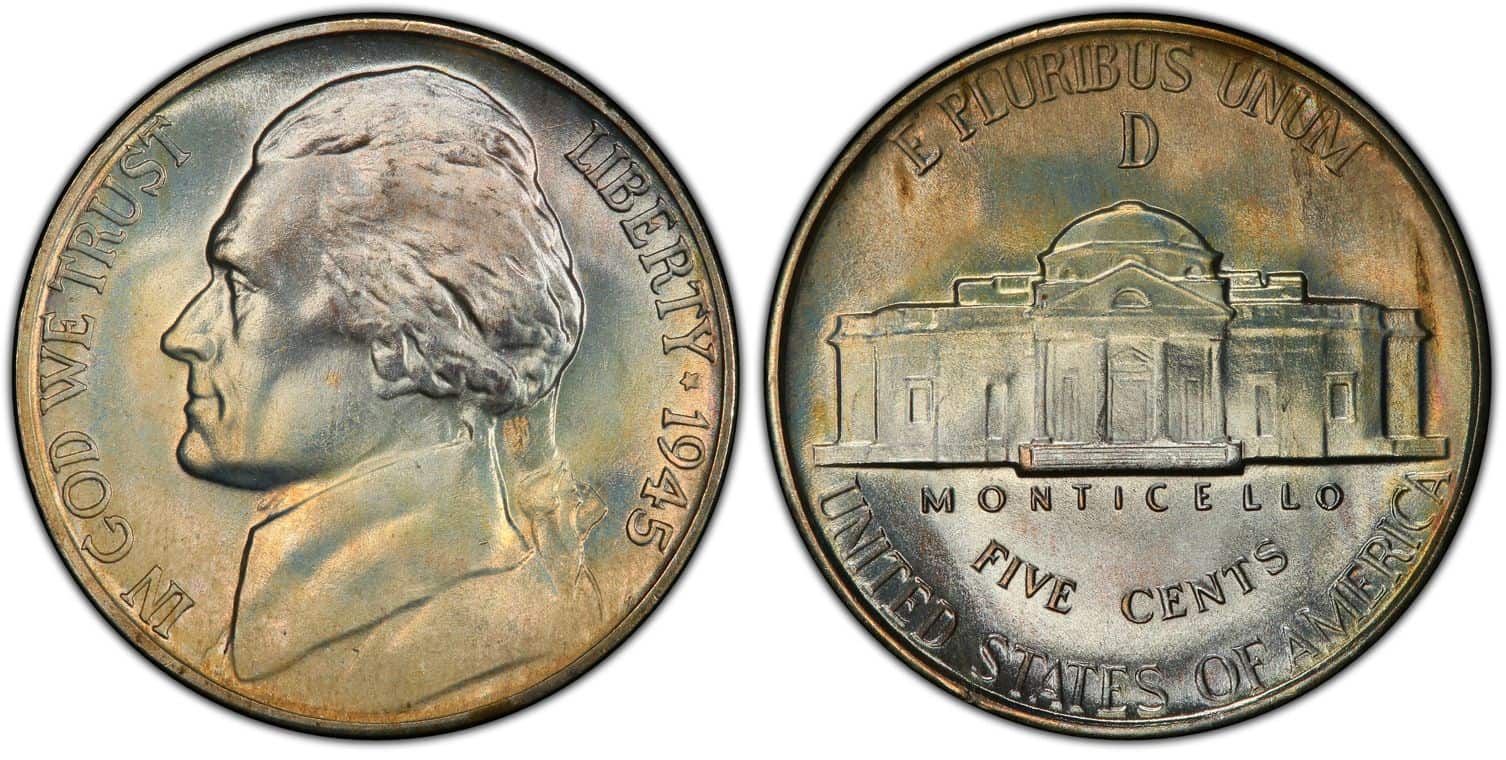 Most of the coins on this list were sold at specialist coin auctions. But the internet has democratized collecting – and these days, it’s possible to find rare coins on generalist auction websites.

That was the case with this 1945 Jefferson nickel, minted in Denver. It was graded MS68, with the full steps designation. That made it one of only a handful of coins ever to be graded at that level by the PCGS. And instead of a traditional auction house, it was listed on eBay.

It sold in October 2021, and made an astonishing $25,000. And the lucky buyer didn’t have to add any buyer’s premium to their bid. 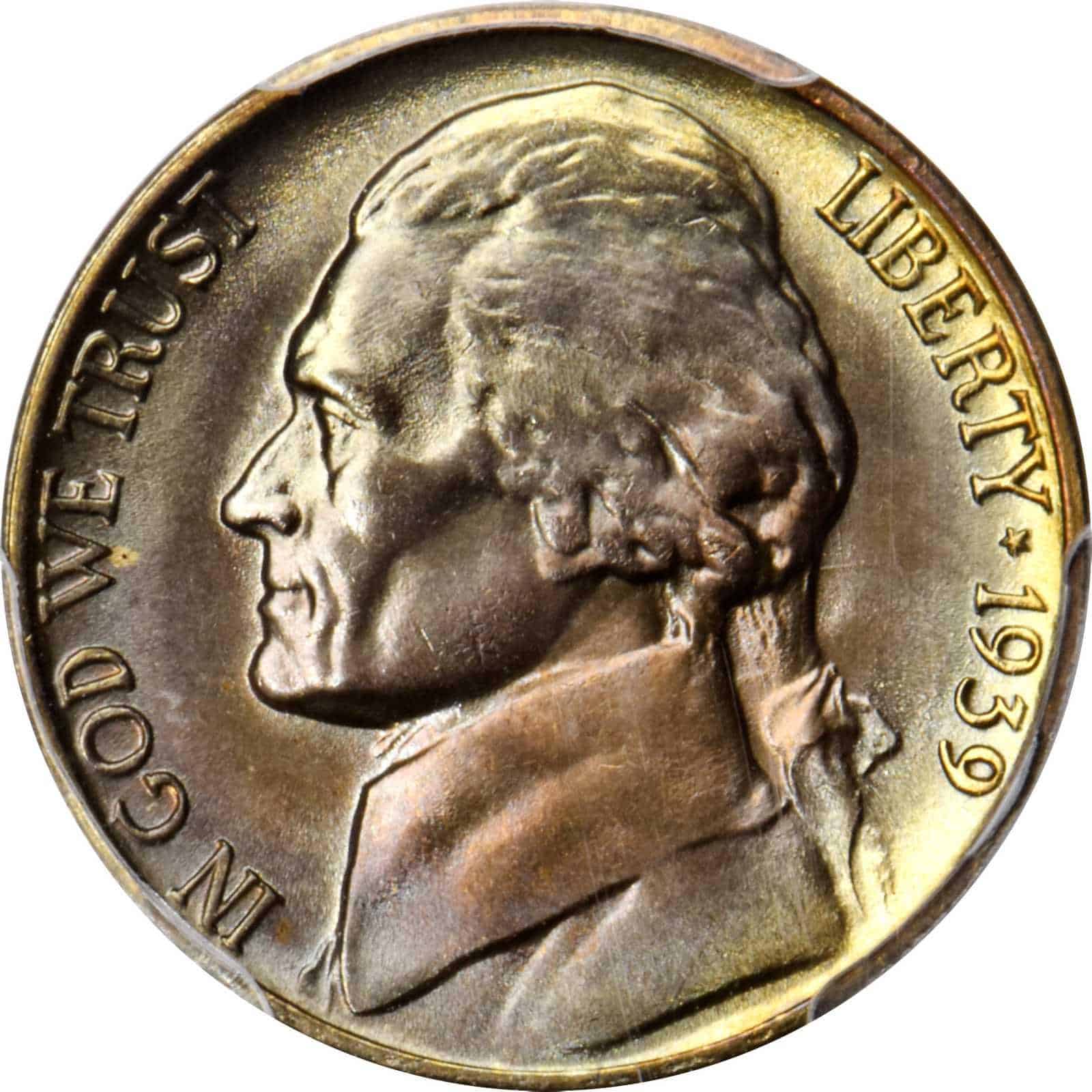 This 1939 nickel is one of the rarer reverse designs, comprising about 45 per cent of the population. And it’s excellent quality, with a grading of MS68 and the full steps designation.

It’s the only one of its kind at that level of quality, and there are none finer. So for collectors looking for this type of 1939 nickel, this is as good as it gets.

That was reflected in the sale price when it came up for auction in August 2019. One collector was prepared to pay $26,400 to take it home with them. 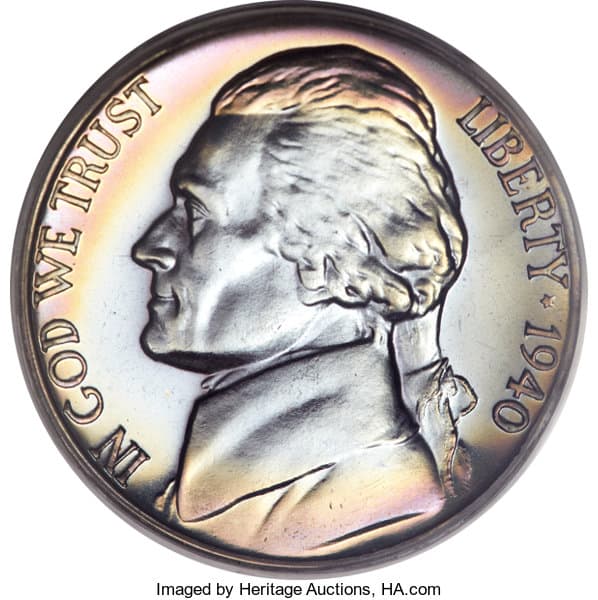 1940 was another year that saw the mint produce nickels with two different versions of the reverse design. The two types are known as the reverse of 1938 and the reverse of 1940. And the former is about fifty times rarer than the latter.

This coin is a wonderful example of that rare type. It’s a proof coin, graded PR68. And it has the full steps designation into the bargain. 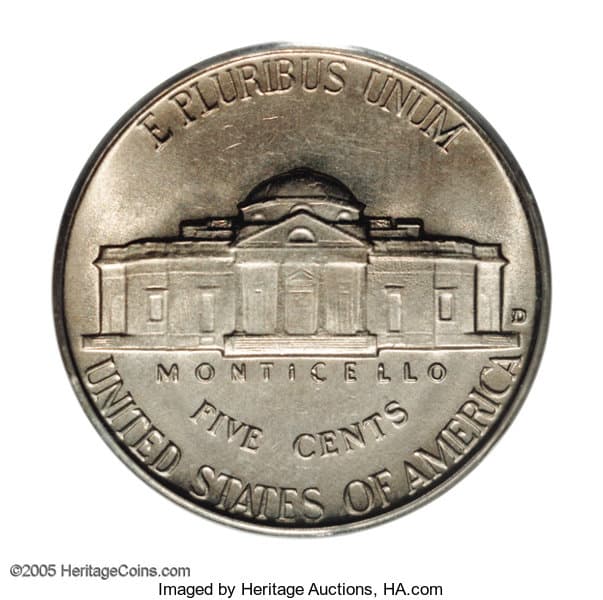 The 1942 Denver nickel has a sub-type known as the “D over horizontal D”. In these coins, the “D” signifying the coin was minted in Denver has been re-punched. The first D was positioned horizontally, the one on top the right way up. The error is easy to see with the naked eye.

Of all the Jefferson nickels, this one is hardest to find in mint state. Fewer than 100 are believed to exist in all mint grades. So when this MS64 specimen with the full steps designation came to the market, there was considerable excitement amongst collectors. 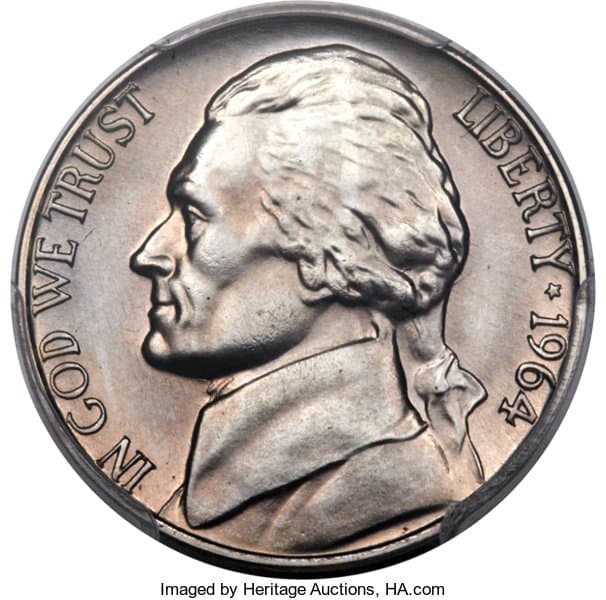 This coin came from a Special Mint Set, a set of coins produced for collectors. Sets from 1964 are exceptionally rare, with only between 20 and 50 believed to have been produced.

This coin has the full steps designation, with five steps clearly shown (the sixth isn’t clear). And with its quality grading of 68, it shares honors with five others. No examples in finer quality are known to exist. 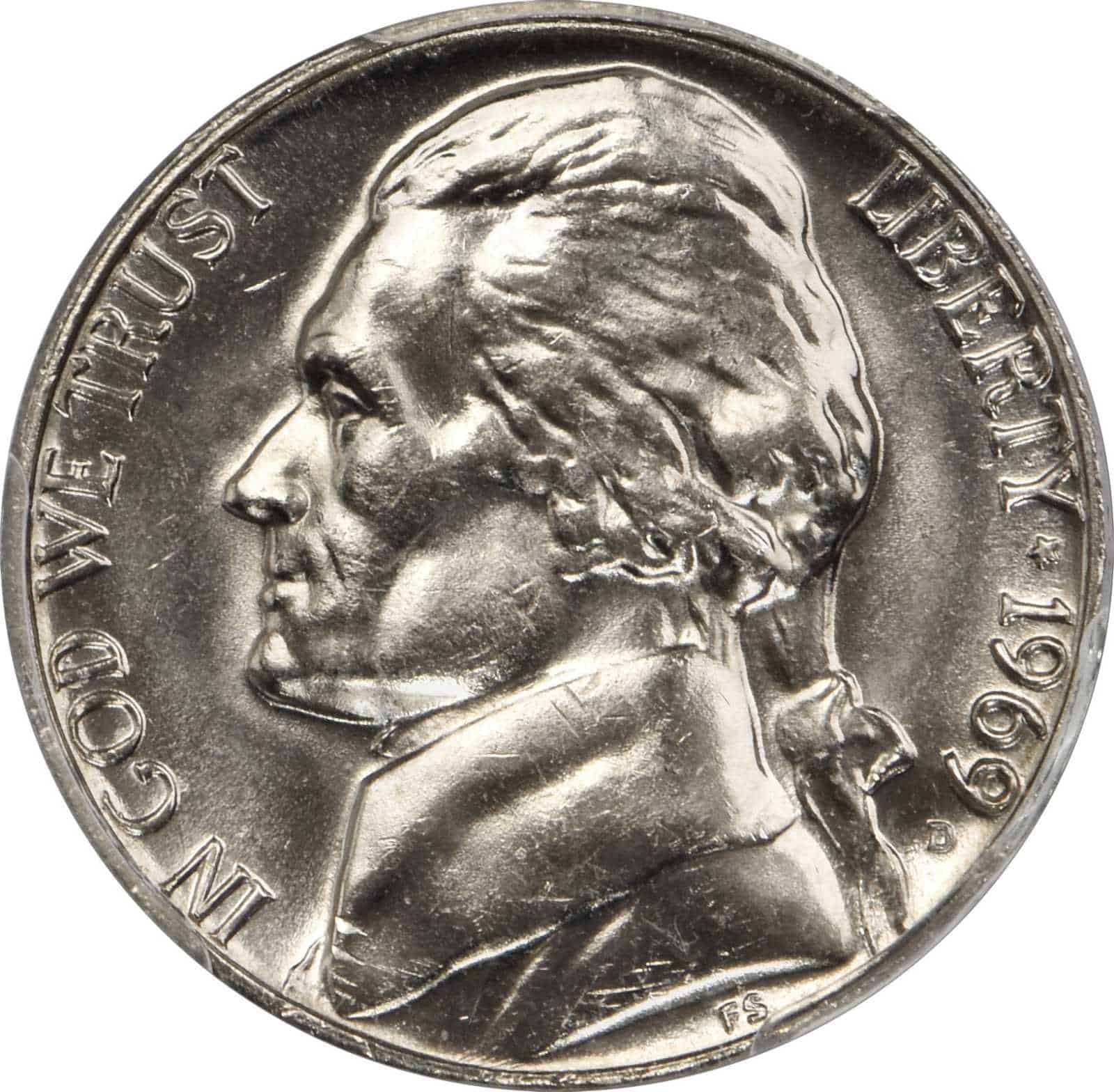 This 1969 Denver nickel isn’t the highest graded example on our list. Its grading of MS65 makes it a Gem, but it’s still some way from the possible top score of 70. The PCGS did, however, award it the full steps designation for the clarity of the detail on the reverse.

So far, it might not sound particularly exciting. But 1969 was a bad year for coin production. The Jefferson nickels minted at Denver were plagued with condition issues. And only one solitary 1969 Denver nickel has ever been certified full steps. That’s this one.

Some collectors believe it the absolute pinnacle of all Jefferson nickels. And when it came up for auction in August 2021, it sold for $33,600. 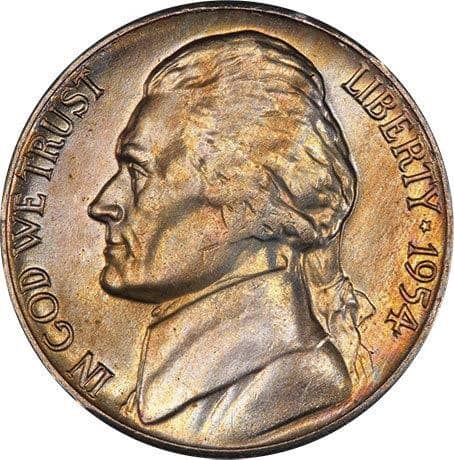 This 1954 Jefferson nickel was minted in San Francisco. And it’s the most expensive specimen in the series ever to have sold at auction.

It achieved its impressive price on account of its condition. Graded mint state 67 by the PCGS, it also bore the full steps designation. It’s rare to find 1954 coins from either San Francisco or Denver with a full strike. And this was the single finest example ever to have been found.

It came to auction in July 2020, the first time it had ever been sold. The auctioneers noted that an MS66 version had been auctioned two years earlier, achieving a price of $30,550.

Expectations were high, with the Collectors Universe – the bible for coin collectors – valuing it at $40,000. In the event, the market was slightly cooler. But determined bidders still pushed the final price to $35,350.

We hope you’ve enjoyed our look at 16 of the most valuable Jefferson nickels ever sold! All these coins have something that marks them out as rare and special. And its this scarcity that means collectors are prepared to pay big money to own them.

Sadly, most Jefferson nickels are worth pretty much their face value. But if you’ve got a particularly attractive version, it could be worth looking at it a little closer. You never know what you might find!