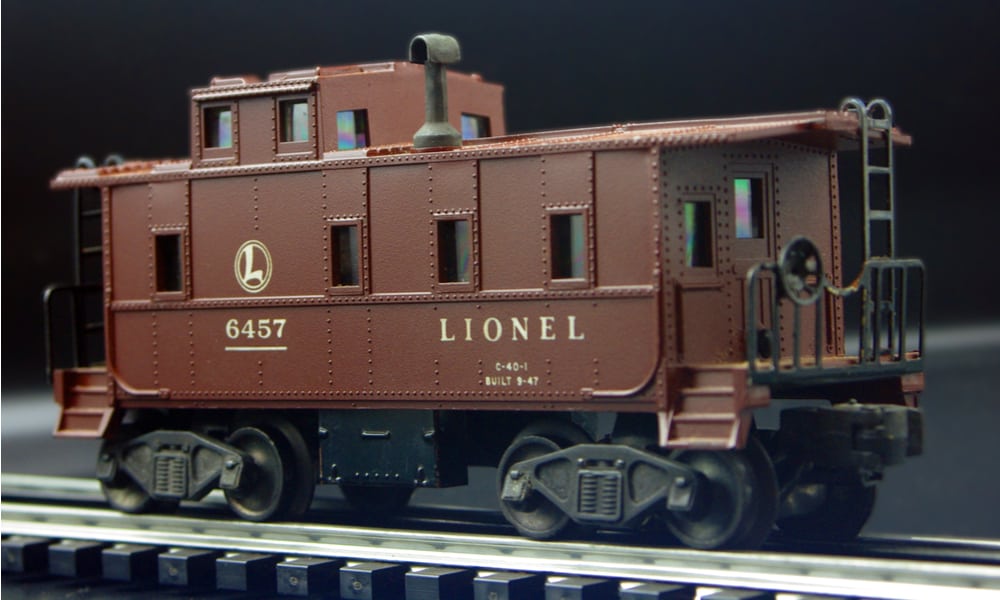 Are you a rail track hobbyist interested in Lionel trains?

Are you looking to sell your model train collection or invest in a rare, high-value one?

Lionel is one of the best-known makers of collectible toy trains, having been in business for more than 100 years.

The value of a Lionel train will depend on factors such as its age, intricate details such as the presence of electric parts, and the train’s condition.

Admittedly, the popularity of these miniature trains has declined over the years. But, there is a flourishing global community of rail track hobbyists keen on spotting valuable Lionel trains.

In this article, you will find a list and a brief description of the 15 most valuable Lionel trains on the market. So, let’s jump right in! 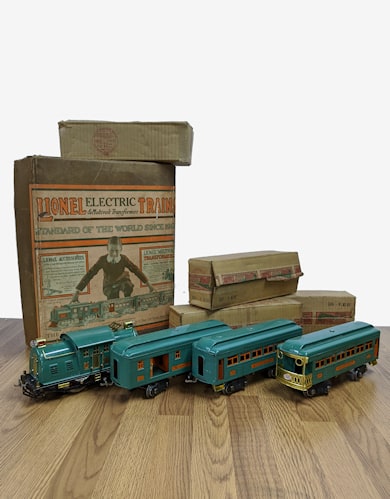 The Lionel Standard Gauge Set is one of the most expensive Lionel trains. It was first built in 1906 before other model train manufacturers adopted the train and gave it different names. The production of the Standard Gauge was discontinued in 1940.

This vintage model train consists of three rail tracks with the distance between the tracks measuring 2.125 inches. What makes this rail set outstanding is the center third rail, which is insulated from the other two rails.

The locomotives, powered cars, and passenger cars feature middle rollers powered by the electricity coming from the center third rail and the other two rails.

The discontinuation of the Lionel Standard Gauge set resulted in this model train becoming scarce, making it a collectors’ favorite. The 700E Hudson brass prototype is one of the most famous Lionel locomotives. Aptly named the aristocrats of models, this Hudson prototype sets the standards for model rail track engineering.

The train is based on the famous J1-e New York Central Hudson engines, making it as impressive and aesthetically appealing today as 70 years ago. 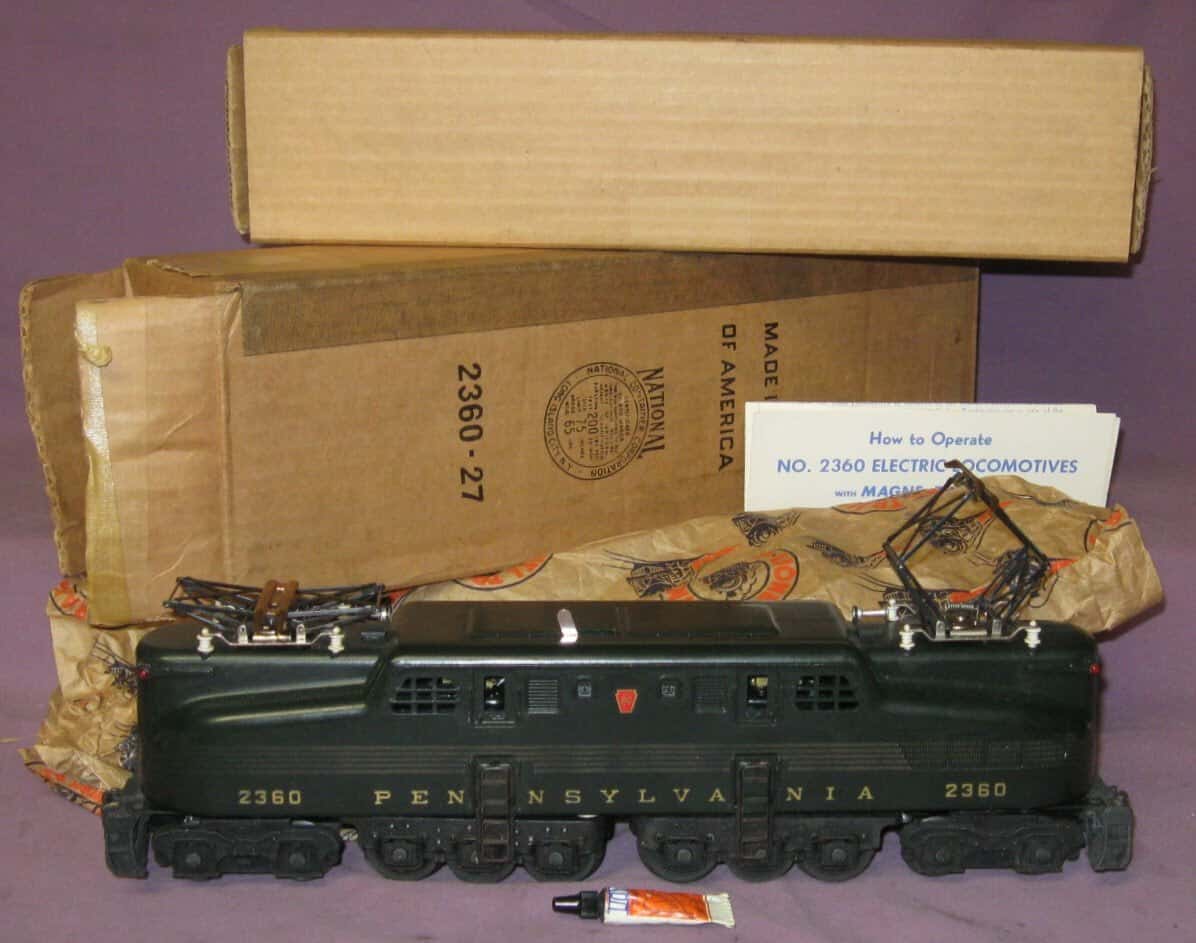 The 2360 Vagell GG1 is a rare postwar model and a favorite among collectors. Famous train hobbyist Bill Vogel wanted a black postwar GG1 train. He bought eight Lionel postwar trains, painted them black, and had Lionel do the decoration.

Features include a die-cast body, dual motors, sheet-metal frame, two pantographs, headlights, and a three-position E-unit. On each end of the train is a decorative horn and decals imprinted with the number 2360.

The Lionel 2360 was first created in 1945 and discontinued after three years. The second production run began in 1949 and lasted three years as well.

During the six years the train was in production, several model iterations were produced. So, one 2360 GG1 might look slightly different from another. 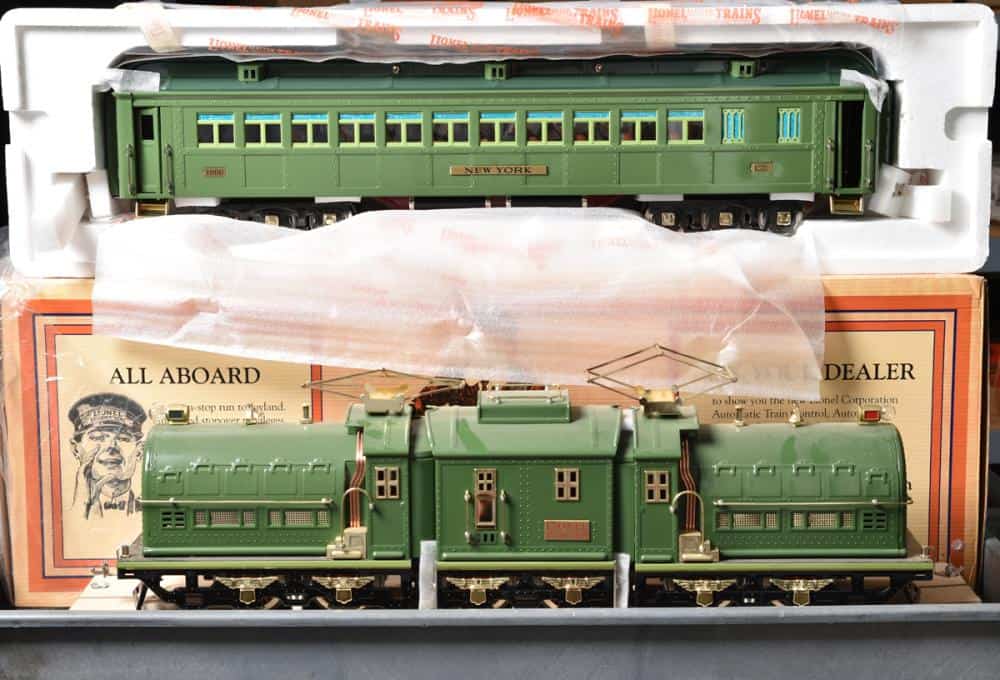 The Brute Lionel train was built in 1927 as a pre-production model or prototype of the standard electric gauge 381E.

For a train built in the ‘20s, the Brute was quite pompous. With a length of 28 inches, few children could lift this toy train.

The Brute replicated the Milwaukee Road’s Bi-Polar engine, featuring three motors. This model was also created to run on a track more than 3 inches wide, quite unusual for a toy train but impressive nonetheless.

The Brute’s exceptional engine stayed displayed in Lionel’s showroom for years. Later, it was passed on to Bill Vagell and other collectors. 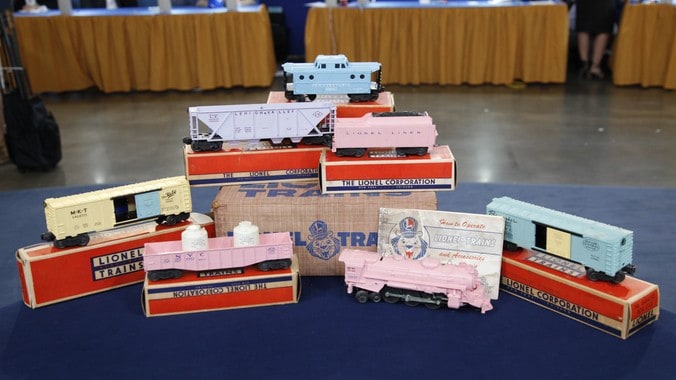 Model trains were initially marketed to sons and fathers. Later, train track advertisements began, including mothers and daughters as spectators but not actual captains or engineers.

Lionel trains began seeing a decline in popularity as children’s interests moved from locomotives to space travel and astronomy.

Lionel began making trains for girls to widen their market. The new girls’ train set was made using whimsical pastel colors. This is how the 1957 Lion Girls’ Train Set came up.

The Girls Train Sets did not sell as fast, and Lionel even bought back some of the colored trains, repainted them, and resold them to make money from this new venture.

Interestingly, the fact that these trains were a flop made them a favorite among collectors. 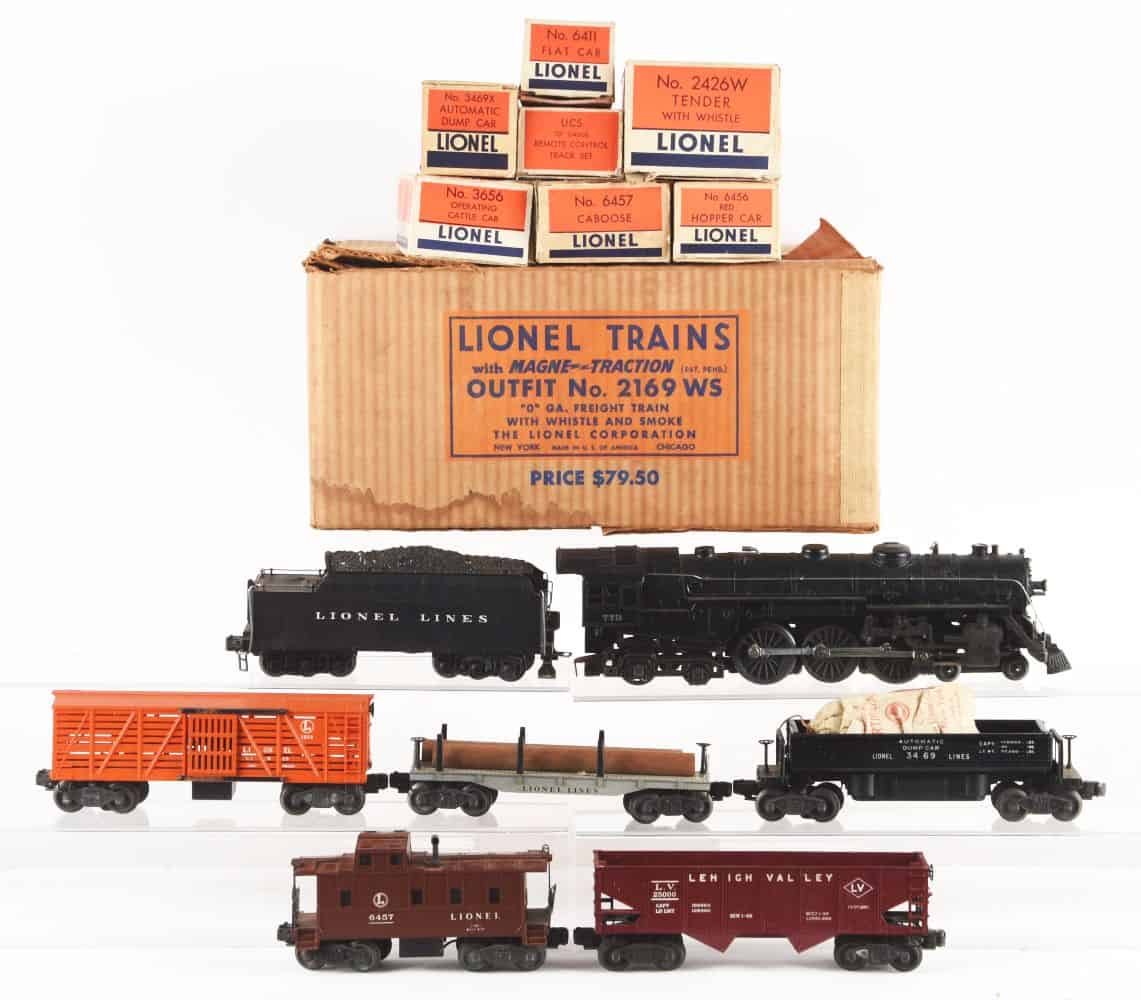 The Freight steam set is rich with history. Lionel made this set as an introduction to the 726 Berkshire, and the successor featured a new number (736) and a magnet-traction system.

Produced in 1950, this Lionel freight comes with a 12-wheeler premium tender. The tender itself is a bit out of the ordinary as it features the phrase ”Lionel Lines” on the train’s sides. Other 12-wheelers had Pennsylvania lettering on the side, making this one differently and sought after.

This freight is also particularly important as it marked the gateway to other premium model trains. In the same year the freight set was introduced, the 6472 refrigerator boxcar and the 3472 operating mill car were also made.

This set’s components include a 2671WX tender, 736 locomotive, a 6462 gondola consisting of six barrels made of wood, a 6472 refrigerator car, a 6555 Sunoco tank car, and a 6457 caboose with Lionel Lines. Other features include a U.S.C. and 0-gauge track, smoke pellets, and lubricants. 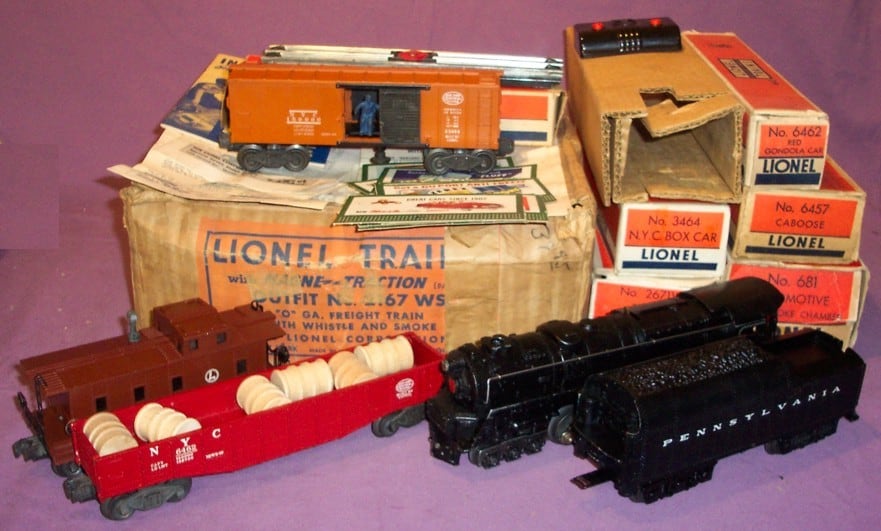 The W.S. freight set, also known as the Overlander, paved the way for many other popular locomotives, including the Hudson and Santa Fe.

Produced in 1953, this rail track set has a basic, no-frills design that makes it intriguing to the hobbyist. 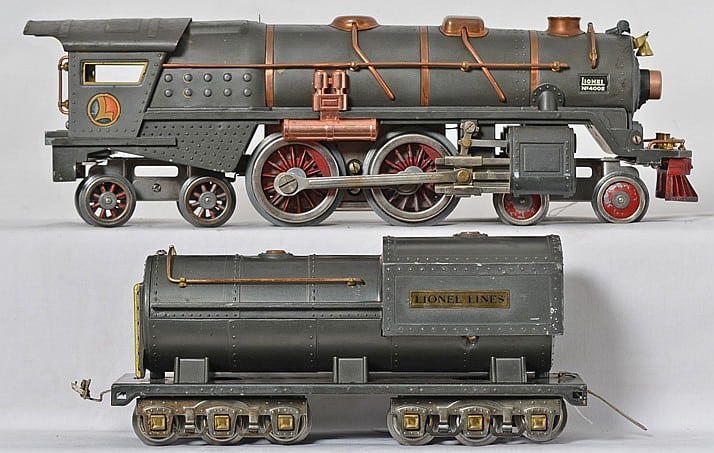 At the tender, you will find brass trim and brass journals. Some of the most valuable 400E locomotives come with original wheels, but you also want to check for signs of fatigue and wear and tear.

This standard gauge comes with a 4-4-4 steam engine coupled with a matching tender. The brass and copper trim combined with the grey color really helps improve this classic locomotive’s value.

The Lionel 400E is a large model train and will definitely stand out in your collection.

The prototype for the Contemporary Brass No.7 steam locomotive was modeled in the early years of the Lionel Company. In particular, the nickel and brass No.7 were created between 1910 and 1923. It set standards for quality and intricate details for the locomotives that came after.

This Brass locomotive is considered a classic that showcases the early craftsman of the Lionel company. This train was truly a work of art and became more than just a toy, attaining the status of a sought-after antique.

Features that make this train unique include a standard gauge, polished brass locomotive, tender, pilot, and wheels decked in red enamel. The handrails, grab rails, bell, and other accessories were made using plated nickel. 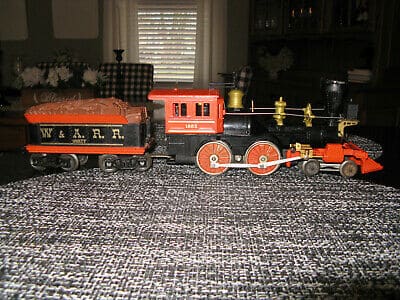 The Halloween General Set is arguably one of the rarest Lionel trains. This one features a 4-4-0 engine, A.A.R. tender, and an orange cab and comes with a Mail Baggage Car and a Western Atlantic Passenger Car.

The hunted train exits the station, making its way to Transylvania, transporting all things spooky everywhere it goes. Inside the train is a vampire chasing a mummy around a crate of creepy cargo. Scary whispers and shrieks come from inside the cargo and boxcar, spooky enough to scare anyone.

The Halloween train runs on a FasTrack rail loop powered by a PowerMax transformer. Standard features include a 4-4-2 steam locomotive and tender, a boxcar with spooky sounds, an animated gondola hosting Dracula, and a mummy.

Other features include three straight FasTrack rails and eight curved ones, a terminal, smoke fluid, and a PowerMax transformer. The Polar Express is the most popular Christmas train set. Hobbyists combine their love for the Holiday season with their passion for model trains.

The Polar Express is a standard feature in holiday layouts and decorations and serves as a fun collection for any hobbyist.

This Lionel train set has been in production for 15 years, and over the years, accessories have been added to the set for extra fun and functionality.

There are numerous ways to enjoy this train collection with the extra features. There is room for additional trolleys, locomotives, and even different passenger cars, allowing you to run the train on a year-round railroad.

The Polar Express set comes with 38 pieces, including 24 curved pieces of track, eight straight track pieces, passenger coaches, a Berkshire-inspired locomotive, a coal tender, and a bell. Fun bell and whistle train sounds and marked buttons that allow the train to move forward and reverse are included. 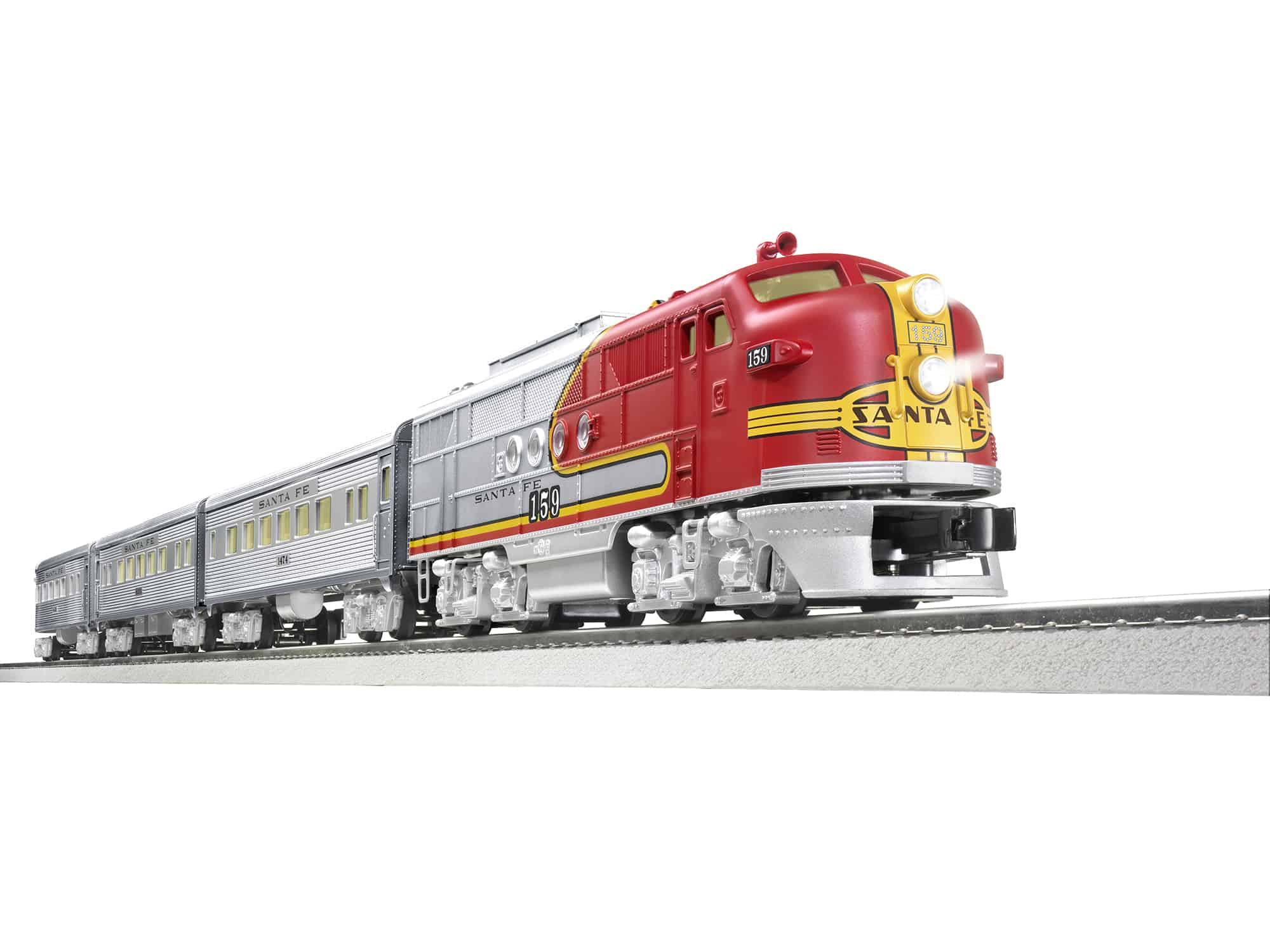 The Santa Fe Super Chief is not only one of the most valuable Lionel trains but also among the most visually attractive.

Created in 2013, this iconic set has been modernized by adding a rolling stock, remote control, and Bluetooth technology. The added functionality makes this electric O gauge more interesting to collectors.

Standard features include a diesel locomotive, observation car, coach car, curved and straight FasTrack sections, a terminal section, remote control, and of course, a power supply. There is also an illuminated interior, operating couplers, directional headlight, and a sound system with revving and other background sounds. 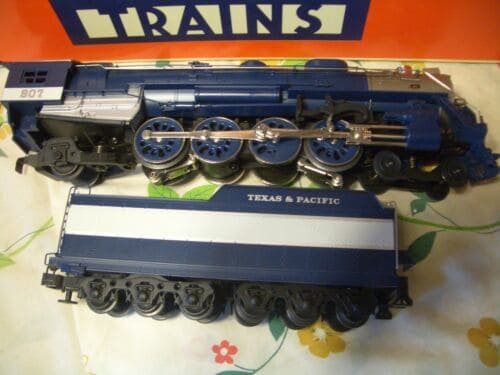 Created in 1963, the Sears Lionel Train is an exclusive rare find. It features a Santa Fe Alco diesel engine, a red boxcar, Lionel gondola, a launching car, and a caboose.

This train set is popular due to its 18-piece frontier, which features animals, fences, a windmill, and even buildings. Also on the set are a voice dispatcher, tank car, and toots for an almost real-life experience. 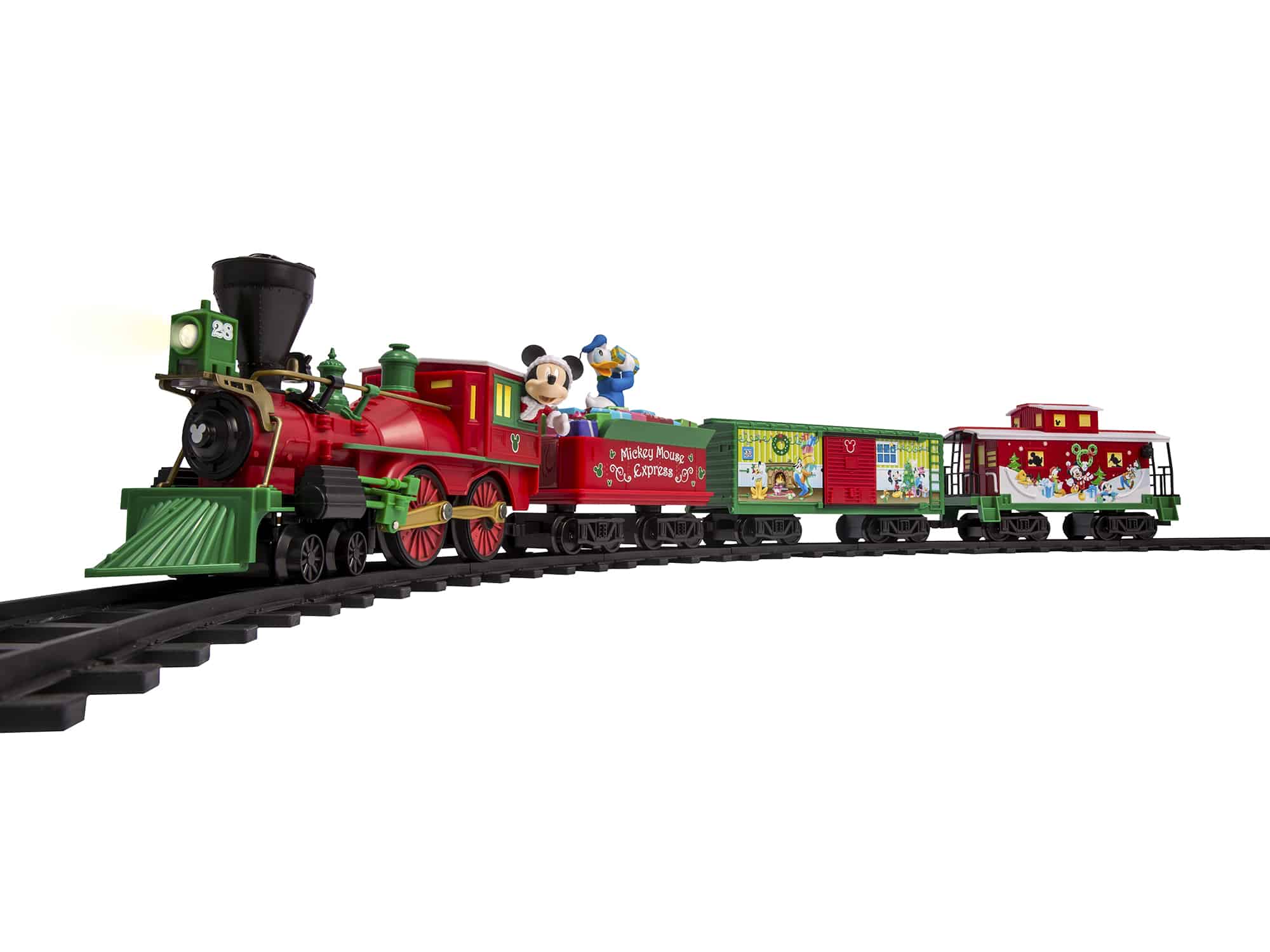 The Disney Mickey Mouse Express is quite a young Lionel O gauge train, given that it was built in 1977. Still, it is a popular collector’s item.

This set was produced for just one year (1977-1978), making it rare. Some of the most collectible ones come while still in their boxes with slightly worn corners.

The Mickey Mouse Express is a valuable collection if you are looking for a rare model train that will stand the test of time. 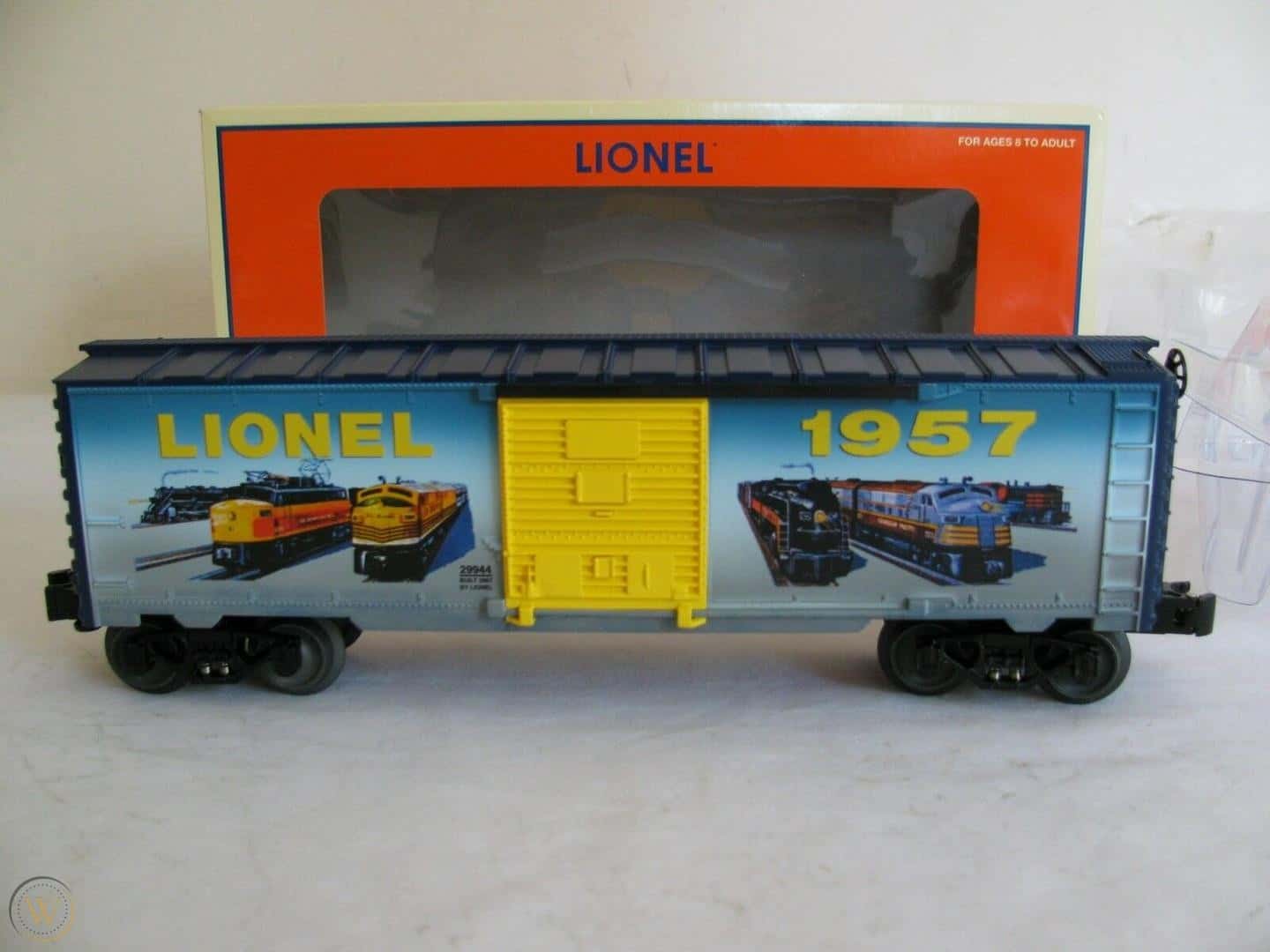 The Lionel Art Box Car, made in 1957, comes with a metal frame, doors that open, a die-cast metal sprung truck and an operating coupler.

There is no way to mention model toy trains without mentioning Lionel. Having produced high-quality model trains for over 100 years, Lionel has definitely set and exceeded the standards for the toy train industry.

Although the interest in miniature trains has somewhat faded, there still is a vibrant community of collectors worldwide. Whether you are looking to sell your collection or want to buy a valuable train set, I hope this guide on the most valuable Lionel trains will help you make a smart decision.