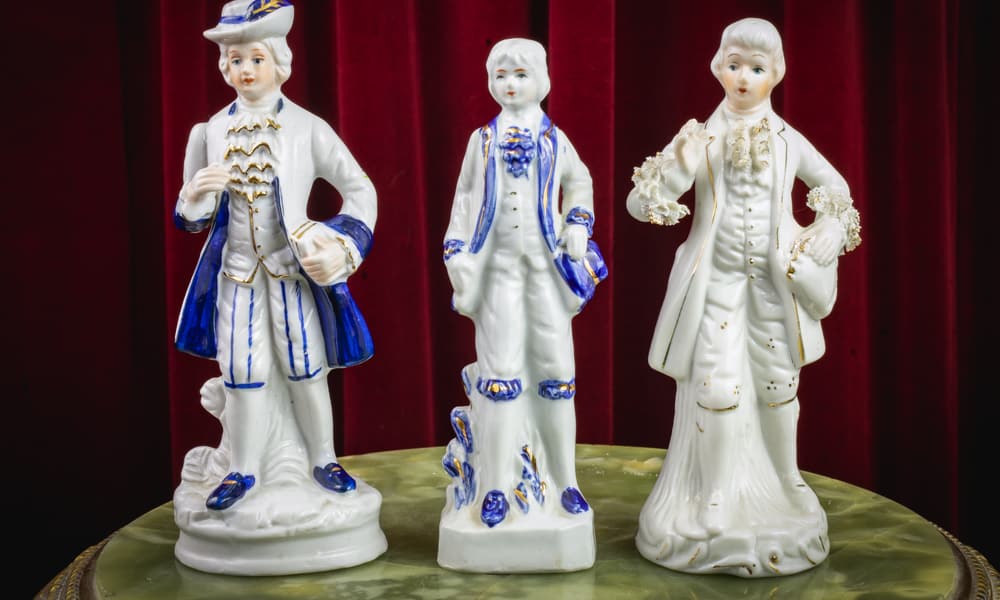 The collectible space often moves in cycles of 50 to 100 years. So while you could once flip your Lladro figurines for twice their price, you’ll get a lot less for them now. Initially, these porcelain statues were issued at $149 and there was a waiting list to order them new!

Sellers still ask for high figures, though buyers rarely go for it. Let’s check out some of the most valuable Lladro figurines on the market. But as always, if you want a more realistic assessment, check the confirmed ‘sold’ listings on eBay and similar auction aggregators.

The word Lladro is pronounced ‘yadro’ because these figurines hail from Spain. Just like French and Italian, the Spanish ‘ll’ sounds like the English ‘y’ so that’s where it comes from. It’s actually their surname – the Lladro brothers are José, Juan, and Vicente, sons of Rosa.

The brothers learned their porcelain craft from their mum and developed a vibrant family business. They began in the 50s with vases, plates, and figurines. Some of these pieces take weeks to complete while others with more detail can be worked on for two years or more!

Lladro figurines are made in stages. And the more complex and intricate they are, the higher their value. One popular piece featuring Cinderella in her carriage took 2 years to sculpt and 3 more years to paint, bake and glaze. But if the piece gets any damage, it’s now worthless.

The Lladro brothers got started by building a kiln in their parents’ backyard. Today, their brand is so famous that Valencia is referred to as The City of Porcelain. Every piece is made by hand and lovingly crafted by expert sculptors. They use traditional techniques in their art.

How does Lladro create such intricate pieces? They start by making a whole, hand-crafted clay figurine. Then they cut this into fragments and rework the segments individually, using plaster molds. Finally, the porcelain pieces are assembled using (liquid) porcelain paste.

To ensure the quality and expressiveness of these little statues, fragments are painted and decorated separately before putting them (back) together. The brand categorizes its most valuable Lladro figurines as High Porcelain. Retired pieces (e.g. Teruko in 2013) are pricier.

It’s important to note that not all Lladro porcelain is equal. We’ve mentioned their High Porcelain line is superior. But they sometimes produced licensed ceramics for other brands. Or Nao figurines. Or even seconds, low-quality Lladros that are sold off at discounted rates.

These pieces are not considered true Lladros even though they come from the same pottery studios. They might not even have a Lladro mark or logo on them, so they can be tough to re-sell. Be careful not to end up with one of these, unless it’s just a personal piece for aesthetics.

This Lladro figurine makes a perfect graduation gift. You’ll know the exact date of purchase, so you can authenticate the piece. But you’re unlikely to ever sell this piece. It’s likely to be a sentimental piece that you’re deeply attached to. In a few decades, it’ll be worth way more.

This is a good way to position legacy pieces. Imagine showing this off to your grandkids, particularly if you’re the first generation to graduate college. And if you really need to, you can probably sell it off in 20 to 50 years to help pay the next generation of college tuition.

We mentioned that Lladro pieces often had a selling price of $149 when they were first released. Sometimes, pieces came in limited numbers that were exclusively sold to Lladro Club members. Other ceramic figurines were mass-produced using commercial molds.

But even these large-batch pieces were painted and embellished by hand, so the quality wasn’t reduced by the commercial volumes. That said, rarer, limited editions fetch higher rates than their more populous mass-market porcelain. So find out how many were released.

One element of shopping online is particularly tricky, and you may have noticed it on this list. When you check auction items against databases, you may notice the clothing and skin tone are slightly off. And you can’t be sure if that’s a lighting thing or if it’s a counterfeit.

This is a tricky one to get around, but it helps if you can buy a piece with multiple photos. The more angles you can view, the surer you’ll be of its authenticity. You could also call the seller and ask for a video call. Ask to inspect the figurine in various light conditions and locations.

What’s so bad about Nao figurines? Nothing really. They’re simpler and less complex than other Lladros, with paler colors, fewer details, less movement, and blander expressions. It’s an intentional ploy. Naos were meant to be cheaper and many didn’t carry the Lladro logo.

So if you’re buying (or selling) a Nao Lladro, be sure of the item and don’t price it like a stamped Lladro. These Naos were first released in 1968 to appeal to the masses. Naos has a separate design team from other Lladros. They had a static design and weren’t as realistic.

If you’d like to authenticate a Lladro figurine, the best place to check is the online Lladro database. This is a ‘fan effort’ not associated with the company, but it’s comprehensive. You can search for a piece by its year of release, sculptor, designer, subject, or product number.

On registries, only the last four digits of the product number are listed, so read the figure from right to left. You can also confirm the name of the piece with a quick Google search. The official names of the sleepy kids in No. 5 (above) include Girl with Candle and Boy Awaking.

People routinely argue about the differences between porcelain, bone china, faience, and other ceramics. The word porcelain comes from porcellana, a translucent type of seashell. And while the Chinese were the originators, Europe eventually caught up in the early 1700s.

The Europeans nicknamed their variant ‘white gold’ for its beauty and value. And while lots of statues were made to mimic the Lladros style, you need that blue mark (or one of the earlier logos) to be sure it’s a verified piece of art. Otherwise, it’s just a cheap knock-off.

While porcelain is typically glossy, the most valuable Lladro figurines are the Gres series from the 70s. They had muted palettes, a matte finish, and realistic human skin tones. These statues featured animals too, with authentic texture and seemingly natural finishes and hues.

But regardless of what category you’re exploring, you can get a better price for your Lladro figurines by selling them as sets. You can group kids together, or ballerinas, or animals. This set has children from different races playing musical instruments to form an inclusive band.

Some Lladro figurines are so rare and valuable that even when they’re damaged, it won’t affect their price. This includes figurines that commemorate an important historical or cultural event. Limited Edition pieces also fall in this group. Or statues that show sentiment.

A figurine that tells a story can also be quite expensive. Particularly if it’s a diorama with a combination of humans, animals, and transport vehicles. It could be a car, bike, train, or building. In this case, the retro image shows a man lighting a vintage street lamp in the cold.

Clowns are a curious subject for Lladro figurines. They express a broad range of emotions and wear colorful outfits, so they’re an attractive muse. This particular clown is a vibrant specimen that gave the artists lots of room to expose their varied skills and creativity levels.

The figurine has lots of little elements that draw your attention, from his checked pants to his comical watch. These details hold your focus for extended periods, which is a crucial feature for display items. The clown had a limited run and was retired in 1995, raising his sell rates.

While color is an important part of porcelain pieces, a true artist can create exceptional work in monotones. And Lladro currently has over two thousand carvers, molders, and painters that keep their quality way up there. This even applies to their plain white pieces.

This particular figurine is a mythical unicorn. Such care and attention has been paid to the fine hairs on its mane and tail. The stripes and grooves on its horn are equally detailed, and you can define every muscle on its body, plus the blades of grass and those flower petals.

Once you’re experienced enough, you can instantly recognize the style of Lladro figurines. But the Lladro logo is the quickest way to confirm whether your figurine is real or fake. Other pricing factors include condition, limited runs, or the presence of the figurine’s original box.

Don Quixote ceramics are considered top of the line. This one was retired in 2004 and was never unpacked or removed from its original box. Both the box and the statue are in mint condition, but because the box is sealed, the seller hasn’t posted pictures. That can be tricky.

One of our greatest superpowers as humans is our imagination and our ability to tell stories. And when you look at a carving like this one, you can fill in the details of their emotions and experiences. You can tell it’s winter and that the children are happy and excited as they play.

You can tell it’s a well-off family because the children have warm, clean clothes and their snowman does too. Even their puppy is getting into the action. This piece would engage you for ages if you spotted it in a display case and that’s part of its high value and deep appeal.

The larger and more detailed a figurine is, the higher its value. This comes out clearly in diorama pieces that play out active social scenes. But even with a solo figure, bigger is better. Also, the figurine can be linked to something sentimental – like a loved one in the military.

This piece would do well with the mothers and wives of sailors since it’s a silent prayer for them to make it home safely. It can also pay homage to the troops, thanking them for their service. It was a limited edition piece and was retired in 2017, so that does hike its pricing.

Do you have any more tips on the most valuable Lladro figurines? Tell us in the comments!

What is My Lladro Worth: https://www.youtube.com/watch?v=McPcqU-2jvM

Lladro: A History of Porcelain: https://www.youtube.com/watch?v=Kq866ftGVfw

1 thought on “17 Most Valuable Lladro Figurines Worth Money”