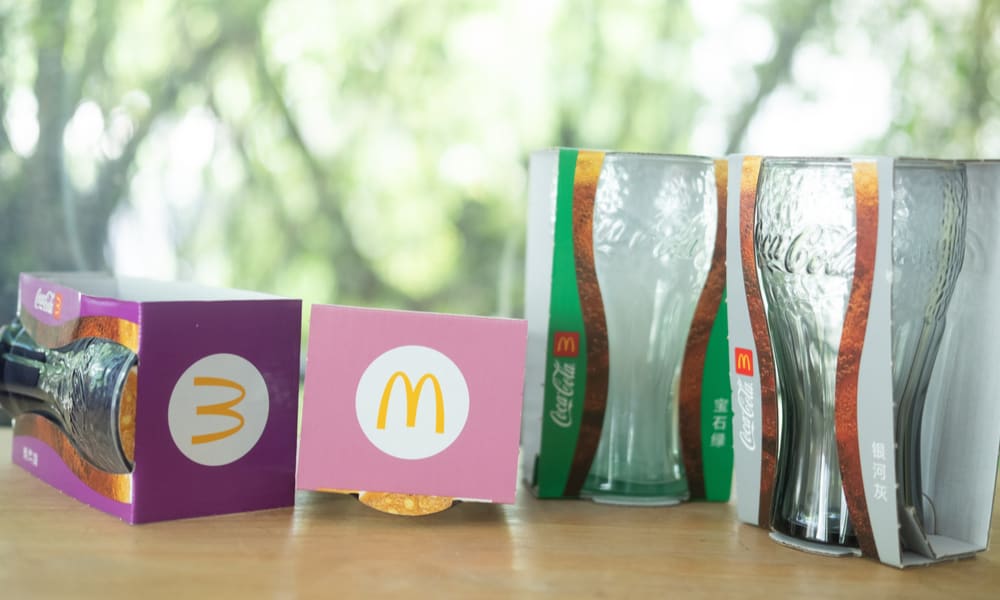 Are you a McDonald’s fan?

Aside from their finger-licking food, this popular fast-food franchise knows how to engage its fans with fun, relevant, and nostalgic merchandise that is actually collectible and sometimes worth a lot.

McDonald’s glasses are some of the most popular items fans love to collect. It isn’t uncommon to see people selling and buying these glasses for hundreds of dollars, depending on the theme and nostalgic value.

As a fan myself, I outline below some of the most valuable McDonald’s glasses according to what collectors are selling and buying them. 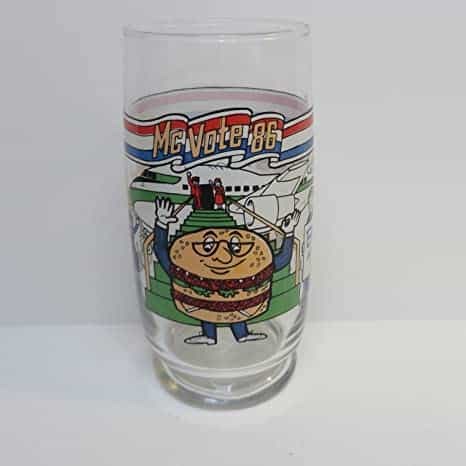 The McDonald’s McVote glass set is extremely rare and a favorite among collectors.

One glass features a big mac in a blue vehicle as people all around cheer while others hold a sign that says, “Vote for me for burger of the year.”

The other glass shows a burger giving out a peace sign with the caption “He’s the big cheese in burgers.”

You would have landed a true gem if you could get the glasses as a set.

Produced in 1981 to promote the Great Muppet Cape, these four glasses come in a set featuring Miss Piggy riding a motorcycle as she crashes into a glass window. Kermit is on a bicycle, the Muppets are riding the Happiness Hotel bus, and Gonzo, Kermit, and Fozzie are in a hot air balloon.

Daryl Cagle did these vibrant and colorful illustrations. Each glass is about 5¾ ” tall.

On the underside, the glass is marked “Henson Associates Inc. 1981.” 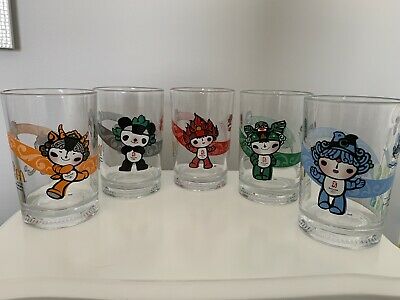 The 2008 Beijing Olympics were truly memorable. And, in the usual fashion, McDonald’s produced glasses to commemorate the event.

The full set featuring all five mascots is extremely collectible and an attractive find if you collect Olympic or sports-based memorabilia. 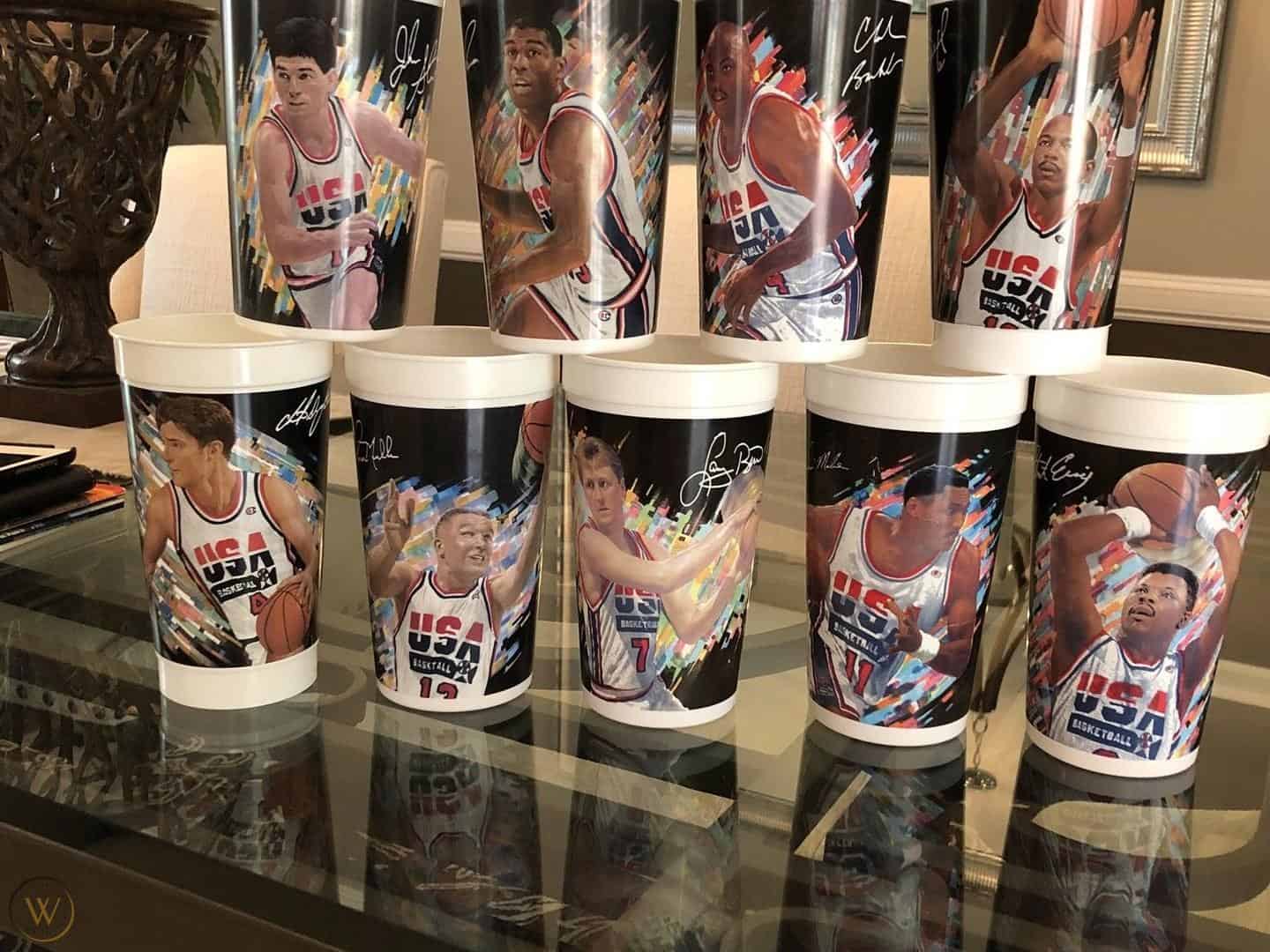 In 1992, the United States men’s basketball Olympic dream team boasted some of the best players in the country. To celebrate this star-studded team, McDonald’s released the Dream Team cups. Then, large drinks were served in a plastic Dream Team glass.

Each glass featured a picture of one of the team members, statistics about the player, and a facsimile autograph. McDonald’s encouraged patrons to collect all 12 cups featuring the 12 players.

These Olympic Dream Team 1992 cups are some of the most valuable McDonald’s glasses because they are extremely rare; most have been lost in the last 30 years since they were released, with some sellers asking for hundreds of dollars for these cups. 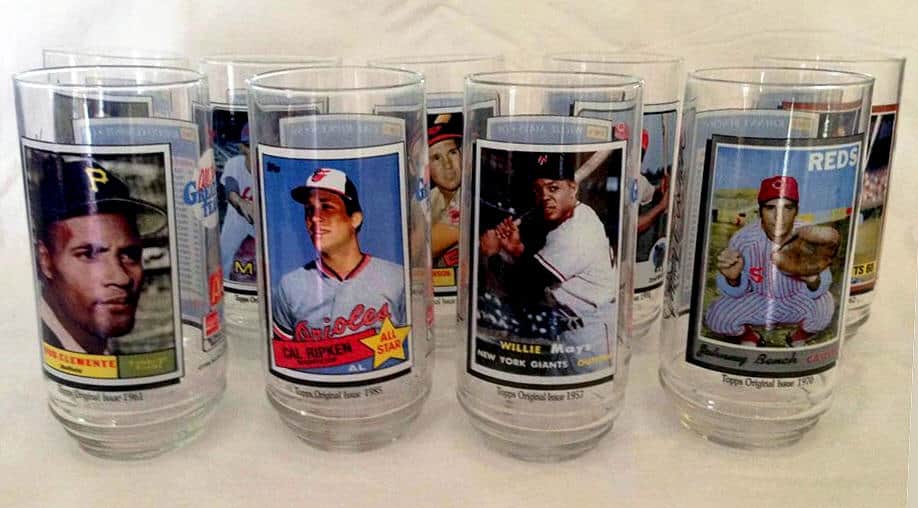 McDonald’s produced the All-Time Greatest Team glasses in 1993 to celebrate the MLB team at the time.

The complete set comes with nine glasses, each with the words “1 of 9” all through to “9 of 9.” The glasses also feature each of the nine players in the defensive position.

There is a 10th glass featuring Carl Yastrzemski and has the words DH# 10. While all the other glasses featuring the nine players were distributed nationally, the glass with the 10th player was only distributed in Boston.

Another interesting feature on the glasses is a Topps original issue card representing each player at the front of the glass. On the back of each glass are career statistics of individual players and their facsimile signatures. 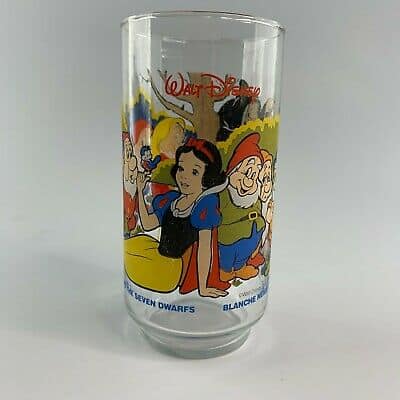 These vintage Snow White Coca-Cola glasses are another collaboration between Coca-Cola, McDonald’s, and Disney.

On their own, any of these glasses is a gem, but the entire collection is much more desirable and valuable. 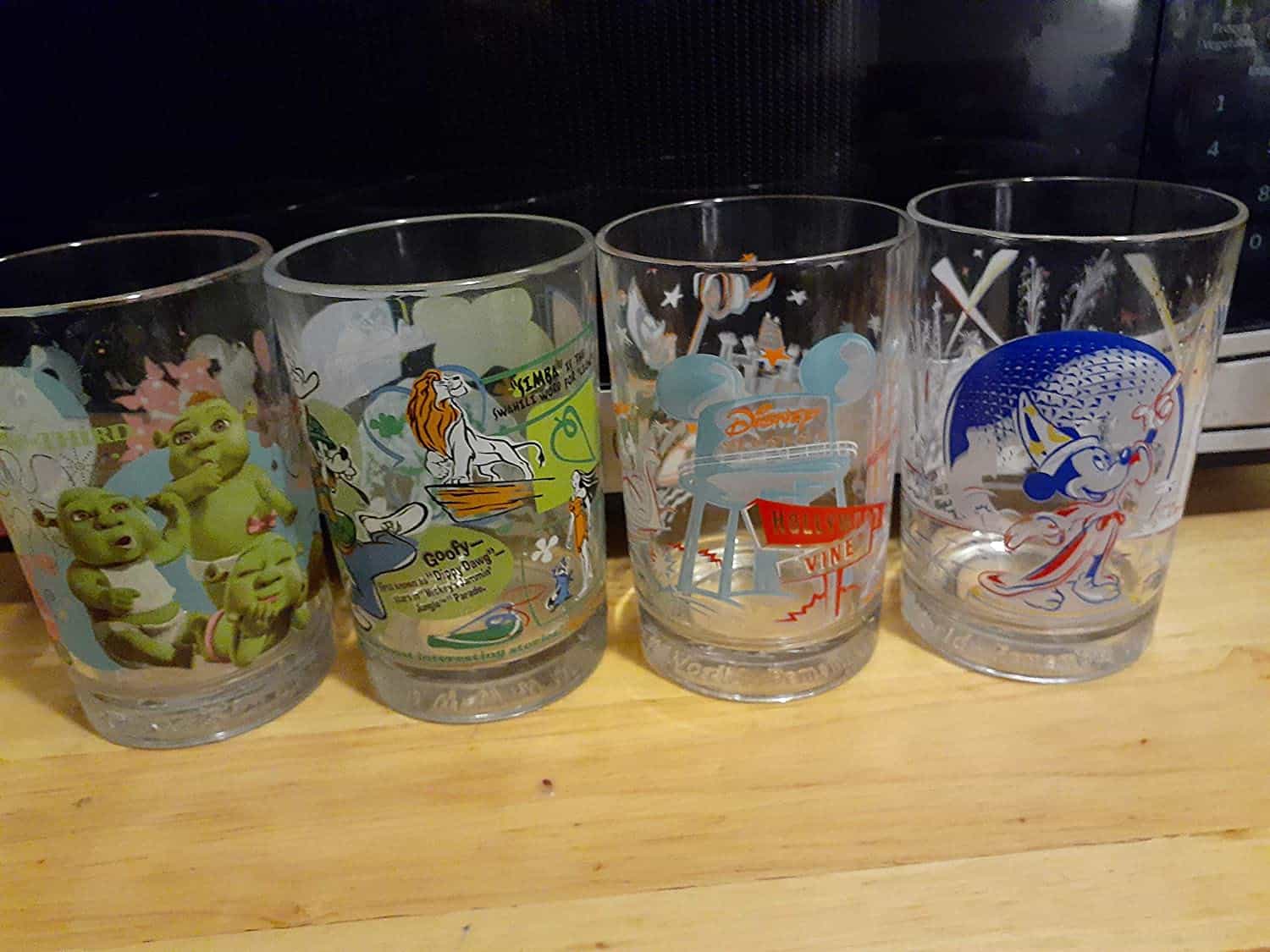 Disney World celebrated its 25th anniversary on October 1, 1996. To commemorate this, McDonald’s released the Donald Duck, Beauty and the Beast, Goofy, and Mickey Mouse glasses

The glasses are more valuable when they come as a complete original set released. What makes these glasses collectible is the characterization of the popular Disney attractions and the creative use of colorful imagery on the glasses. 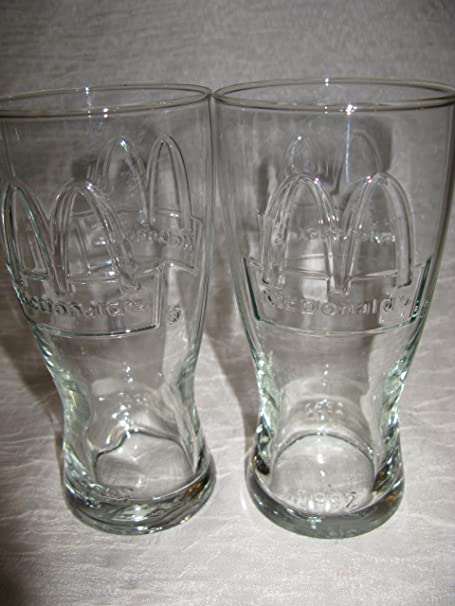 The brand name ‘’McDonald’s’’ and the year of manufacture are also inscribed on the glass with raised lettering.

In addition to this, the Golden Arches are embossed on the bottom side of each glass. The glasses measure 6-1/2” tall and have a capacity of 16oz. McDonald’s released these Pyrex glass cups in 1982, making them some of the rarest merchandise and equally among the most valuable.

The glasses originally came in a set of four and were made by the Pyrex Corning company for the McDonald’s franchise. The glasses are nested in a detachable mustard yellow plastic holder, making it easy to hold the glass whether you are drinking a cold or hot beverage.

On the outer part of the holder, you will find the archetypical golden arch etched into the plastic. At the bottom of the yellow plastic holder, the words Pyrex Ware by Corning Made Exclusively for McDonald’s 1982 are inscribed. And inside each cup are four golden arches. 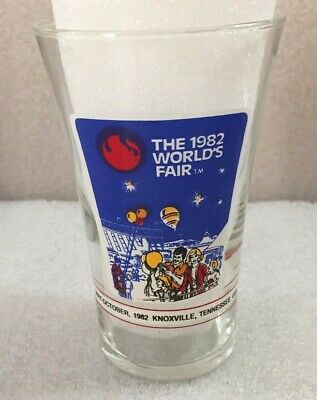 The World’s Fair event held between May and October 1982 in Knoxville, Tennessee, USA, celebrated how energy powers the world’s industries and brings people together.

The event attracted people from all backgrounds and cultures and entailed international and national industrial exhibits.

In collaboration with the Coca-Cola Company, McDonald’s produced this commemorative glass. It features a family of four in celebration, with the event’s venue used as a backdrop. As the Camp Snoopy theme park was getting ready to open for the first time, McDonald’s celebrated by releasing a set of Charlie Brown Camp Snoopy drinking glasses.

McDonald’s released two kinds of these glasses: the plastic and glass versions, but both have similar designs. The glasses feature the Peanuts Gang out camping.

Throughout the Camp Snoopy park launch commemoration, McDonald’s released a glass over five weeks. A lucky customer would ‘win’ a glass each week upon purchasing a drink.

12.  Set Of 4 McDonald’s “Through the Years” Collector Drinking Glasses 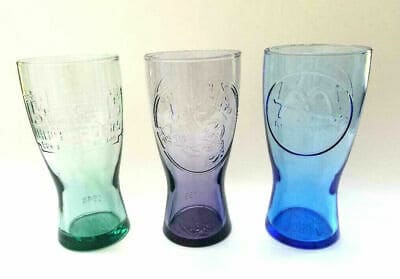 This Through the Years set of 4 Mcdonald’s glasses is a collector’s favorite and a rare find.

The glasses reference the changing colors of the tall drinking glasses McDonald’s has produced over the years.

The collection of glasses ranges from a 1961 clear glass through to a 1992 dark blue glass. Over the years, the glasses changed colors from clear, blue, light blue, to dark blue. The Daisy juice glasses are some of the most iconic McDonald’s merchandise. These vintage glasses feature a pattern of the McDonald’s golden arches all around the surface.

In addition to the bright yellow or white Golden Arches pattern, white or yellow daisies decorate the glass.

The 1970s glasses make a wonderful addition to your vintage glass collection or as a gift to another McDonald’s fan.

What makes these glasses so valuable is the intricate embossment, as each character is carved out in a magnificent 3D style, so they are literary popping out from the sides of the glass.

These 1995 McDonald’s glasses were made for the French and USA audiences. Glasses have the country of origin inscribed at the bottom.

The glasses are often sold in a set of four, featuring the four characters in the Batman Movie.

These McDonald’s glasses were produced as Walt Disney commemorated the start of the new millennium, marking 100 years of Disney Magic.

Each square glass features a character from the Walt Disney Theme Parks. The complete collection comes with a set of four glasses.

In addition to a Disney character, the glasses feature the Walt Disney Theme Parks, including Magic Kingdom, Animal Kingdom, EPCOT, and Disney studios embossed on the side. If you are a fan of the Garfield comic strip by Jim Davis, then you will love this Garfield and Odie mug. The glass mug features a brightly colored cartoon where Garfield lounges comfortably on a hammock as his friend Odie rocks the hammock and ensures that Garfield stays cool while acting as his drink holder.

The words “It is not a pretty life, but somebody has to live it” appear on Garfield’s thought bubble. Inside the glass is a copyright symbol with the words ”Garfield Characters 1978 United Features Syndicate, Inc., Jim Davis.” The McDonald’s logo is inscribed on the mug and is the Anchor Hocking logo and the initials ”USA.” 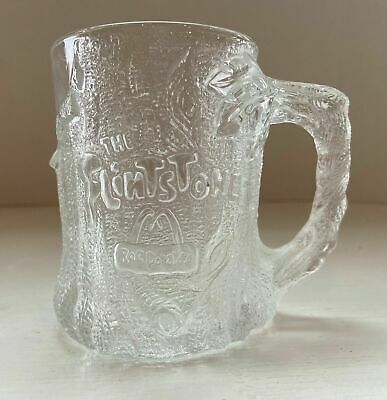 The Flintstones franchise was a force on its own in the 1990s, and McDonald’s did not hesitate to jump on the bandwagon to impress fans.

The fast-food franchise came up with the Flintstones TreeMendous Mug to mark the release of the 1994 movie depiction of The Flintstones, in which John Goodman starred. As part of the promotion, McDonald’s offered a set of four mugs, each with a creative design.

The TreeMendous mug, with its wild design, remains the most popular of the four glass mugs. What makes this glass collectible is that it is designed like a tree stump with interesting details such as branches, leaves, and a bark.

The glass is heavy and textured, so it really mimics a tree. The Flintstones/McDonald’s logo, RocDonalds, complete with golden arches, is embossed on one side of the glass. The phrase, TreeMendous, is also inscribed at the bottom of the mug

Whether you are a sports fan, a Disney enthusiast, or love yourself a good old Coca-Cola glass, a look at the range of McDonald’s vintage glasses will reveal a host of excellent options. Many of these glasses come as a set and are more valuable this way.

I hope this list of the most valuable McDonald’s glasses helps you spot some exciting finds to add to your collection.