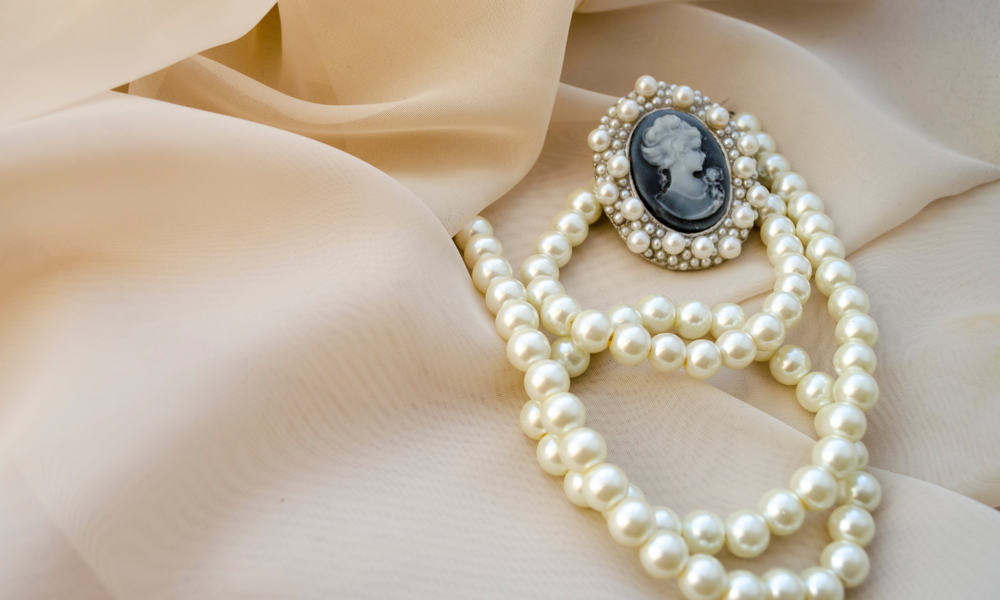 Cameos are one of the most enduring and beautiful forms of portraiture. And good examples in jewelry are highly prized – and can be very valuable.

But what makes a cameo worth a lot of money? That’s what we’re going to find out!

We’re going to take a tour of 15 of the most valuable antique cameos in jewelry. And we’ll find out just why collectors are willing to pay so much.

So if you’re ready, step this way to discover more!

Most Valuable Antique Cameos in Jewelry 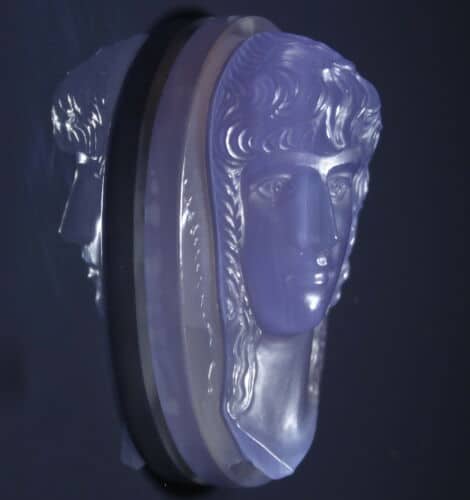 This agate cameo is signed by the artist, someone known only as “David”. It shows the face of a woman in three-quarters profile, in high relief. And it’s made of an unusual substance – a type of hardstone known as holly blue agate.

The material has a beautiful translucent quality, almost like frosted glass. The cameo has two layers, with the face carved in stone with a misty purple hue. Behind it sits another layer of darker blue stone.

The neoclassical face wears a tranquil expression. The pendant was made in France, and measures 1.4 inches by 1 inch by 0.5 inches. 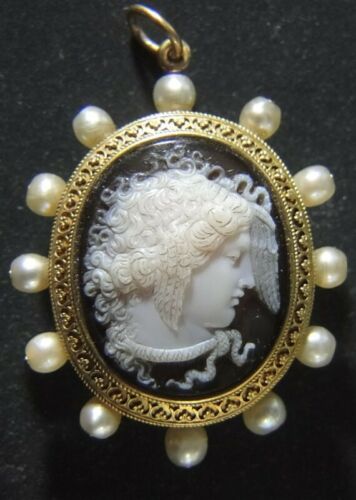 This beautifully detailed cameo is carved in carnelian. It shows a woman in profile sculpted in creamy stone against a black background. And what makes this subject stand out from other cameos is the coiled snake around the woman’s neck.

It is framed in 14-karat gold, a quality most commonly found in American jewelry. 14 pearls around the outside add an extra touch of decadence.

It’s oval, measuring 2.5 inches tall and 1.25 inches wide from the edge of one pearl to the one opposite. And it’s both a pendant and a pin. It’s in excellent condition, with the pin still straight and held securely in the clasp.

It was sold by auction online in 2022, and attracted lots of interest. 20 bids were received, and when the auction timed out, the pendant had fetched $3,550. 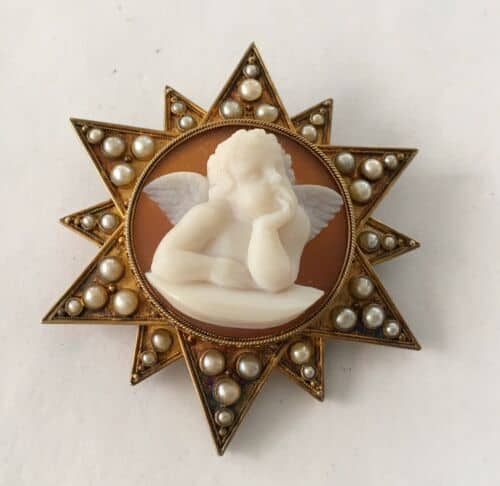 This gorgeous cameo replicates the famous cherubs painted by Rafael. It’s made of hardstone and dates from the Victorian period. And it’s surrounded by a gold sunburst frame embedded with numerous pearls of different sizes.

It measures about two inches in diameter. And it’s another piece of jewelry that doubles as a pendant and a pin. All the metal parts with the exception of the safety catch – a later addition – are made of 14-karat gold.

It was offered for sale online in 2022 at just under $4,000, although the seller accepted a lower offer. This pin is another that dates from the Victorian era, when cameos were the height of fashion. It’s a beautifully carved piece, depicting Alexander the Great alongside Nike, the Greek goddess of victory. Both are riding a chariot drawn by four horses with flowing tails and braided manes.

The subject is based on an 1822 painting by Bertel Thorvaldsen called “Alexander the Great’s Entry into Babylon”. It’s carved from a seashell with a beautiful pink ground and creamy relief. And the quality of the workmanship is quite exceptional.

It’s framed in twisted gold, and is thought to have been made in Italy around 1870. It is in excellent condition, with just a few natural lines in the shell. And at the time of writing it’s still available for sale. You’ll need to pay $4,300 to own it. 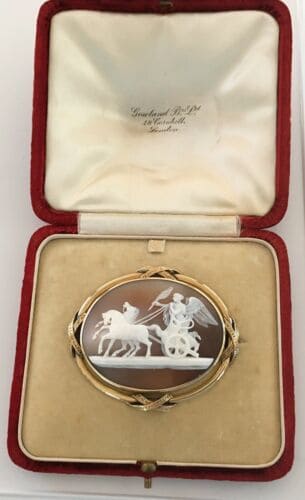 This wonderful cameo pin comes presented in its original fitted box. It’s printed with the name of the retailer, Gowland Brothers Ltd of 48 Cornhill in London.

But of course it’s the jewelry itself that is the star of the show. The cameo is carved from a seashell and depicts a winged goddess driving a chariot pulled by two horses. It’s about 3 inches wide and 2.5 inches tall. And it’s framed in gold, with gold cross pieces at the 12, 3, 6 and 9 o’clock positions.

It is a substantial pin, weighing over 30 grams. It’s in great condition, with the pin straight and held securely in its safety clasp. This hardstone cameo portrays the profile of Ariadne, the wife of Dionysus, the Greek god of wine. The cameo is in two layers, with Ariadne’s face beautifully carved in cream stone on a green ground.

It measures just over 2.5 inches tall by just over 2 inches wide. The carving is exquisite, with Ariadne’s hair shown entwined with vine leaves. And it’s surrounded by an ornate frame in 14-karat gold with decorative sections at the four cardinal points.

It can be worn as a pendant, or as a pin with the bale hidden behind the cameo. The number “141” has been scratched into the back. But in all other respects, it is in beautiful original condition.

It’s for sale online through a London dealer specializing in cameos. And it can be yours for $5,500. 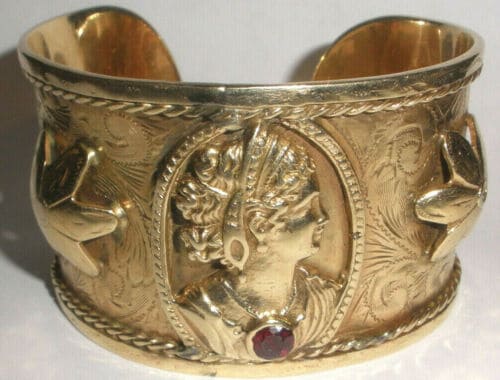 This cameo is rather unusual, in that it’s made of solid gold. It shows a portrait of an American Gypsy in beautiful detail, with curled hair and wearing a ruby necklace.

The cameo in this case adorns a cuff bracelet, made in a single solid piece of gold. It is marked inside with “14K”, signifying that it’s made of 14-karat gold. It has a circumference – including the gap – of about 7 inches. And it weighs a hefty 72.5 grams.

It’s a real statement piece, with a modern look despite its antiquity. It was offered for sale online in 2022, and was bought for $5,500. 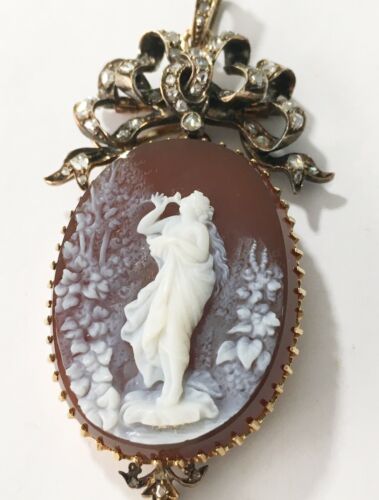 This hardstone cameo shows a full-length portrait of a robed lady surrounded by flowers and leaves. It takes the form of a pendant and is embellished with an 18-karat gold mount and bale.

If that weren’t enough, the gold is studded with rose cut diamonds that catch the light. And a beautiful natural pearl hangs from the bottom.

If you prefer a more subtle look, the top gold portion can be removed. That made it a versatile piece of jewelry in Victorian times, where a plainer look would work well for daytime. Adding the extra section in the evening would allow the gold and diamonds to glitter in the candlelight.

It weighs just under 22 grams. And at the time of writing, it is still available to discerning buyers with $6,800 to spare. This ring is adorned with an agate cameo depicting Marcus Tuilius Cicero. It is attributed to the Italian sculptor Antoni Berini, who lived from 1770 to 1861. Much of his work is now lost, making this a rare piece of art history as well as a striking item of jewelry.

The subject of the cameo, Cicero, was a Roman statesman, orator, lawyer and philosopher. He lived from 106 to 43 BC, and is considered one of the greatest prose writers of ancient Rome.

The ring is a US size 8.75 and weighs 36 grams. It’s on sale online from a prestigious London dealer. And its illustrious pedigree means it commands a high price. Anyone wishing to own it will need to stump up $24,000. This set comprises a pin and earrings, each adorned with a cameo. The pin is decorated with a portrait of the goddess Diana and Cupid, while the earrings depict other goddesses.

They were made as a set and come presented in their original fitted case. The maker was Joseph Mayer, a nineteenth century goldsmith and collector. The pin bears his maker’s mark – the initials “JM”.

Both the earrings and pin are embellished with lots of gold. There are no hallmarks, but the metal has been tested and revealed to be 18-karat gold. The warm yellow color perfectly offsets the blush pink of the shell cameos.

Both the pin and the earrings are in excellent condition. The brooch pin is made of steel – the 18-karat gold would be too soft to perform this function effectively.

It is on sale for $18,500 through the London jewelers Bentley & Skinner. This Georgian ring is adorned with an agate cameo depicting Bacchus, the Greek god of wine. In one hand he holds a staff symbolizing prosperity, and in the other he carries a goat skin.

The brooch was made in the late eighteenth century, around 1780 or thereabouts. Its choice of subject reflects the Victorian interest in classical times.

It is in excellent condition and weighs a shade under 25 grams. It is on sale through Bentley & Skinner, a London jeweler by appointment to the Queen and the Prince of Wales.

This is one of the most expensive cameos on our list. The buyer will need to find $18,300 to add it to their collection. This cameo pendant was produced by the Austrian sculptor Emil Biedermann. Biedermann was a jeweler with royal connections, granted the Austrian Imperial House Warrant in 1850. The firm was given the honor by Emperor Franz Joseph I and supplied jewels to the royal court.

This cameo is made of three layers of natural agate. The colors grade from translucent orange-brown to shimmering gray and frosted white.

It depicts Diana the Huntress, and is probably based on a bust in the Albertina Museum. It is framed in high quality 19-karat gold. On the back there is a horizontal pin and a removeable bale, allowing it to be worn as either a brooch or a pendant.

It is being offered for sale by the Miami jeweler Treasure Fine Jewelry, for the price of $16,950. This striking and unusual cameo pin is what’s known as “habillé”, French for “worn”. This category of cameo is one where the figure is shown wearing jewelry, with a real gem inset into the portrait.

The cameo depicts a Moor princess in profile, facing to the left. She is carved in onyx and wears a gold necklace, earring and diadem embedded with diamonds. And she is surrounded by an ornate gold frame, decorated with enamel, pearls and rubies.

The frame is marked .56, a mark used in Russian jewelry to indicate 14-karat gold. The brooch contains around 1.2 carats of rubies and four beautiful pearls. It is in excellent condition, with a straight pin held securely in a c-clasp.

It is on sale from a Canadian jeweler, and the price reflects its rarity. Any buyer will need to pay $16,200. This distinctive cameo dates from around 1855 to 1870. It appears to depict the goddess Venice, and was most likely made in France or Italy.

It is the frame which most clearly demonstrates its age. It is in the style of the Renaissance Revival, embellished with enamel and four emerald cabochons. The metal is unmarked, but testing has shown it to be 18-karat gold.

But it is the cameo itself that is the real star of the show. The quality of the carving is first rate, with Venice sculpted in high relief.

It is in excellent condition, with a straight pin and secure clasp. And it is on sale through a Canadian jeweler for $14,700.

That brings us to the end of our look at 15 of the most valuable antique cameos in jewelry. From rings to bracelets, pendants to pins, these beautiful cameos are miniature works of art.

Many are mounted in gold and embellished with precious stones like rubies, emeralds and diamonds. But in every case it is the quality of the carving that sets these pieces apart from the crowd.

We hope you’ve enjoyed learning more about them!