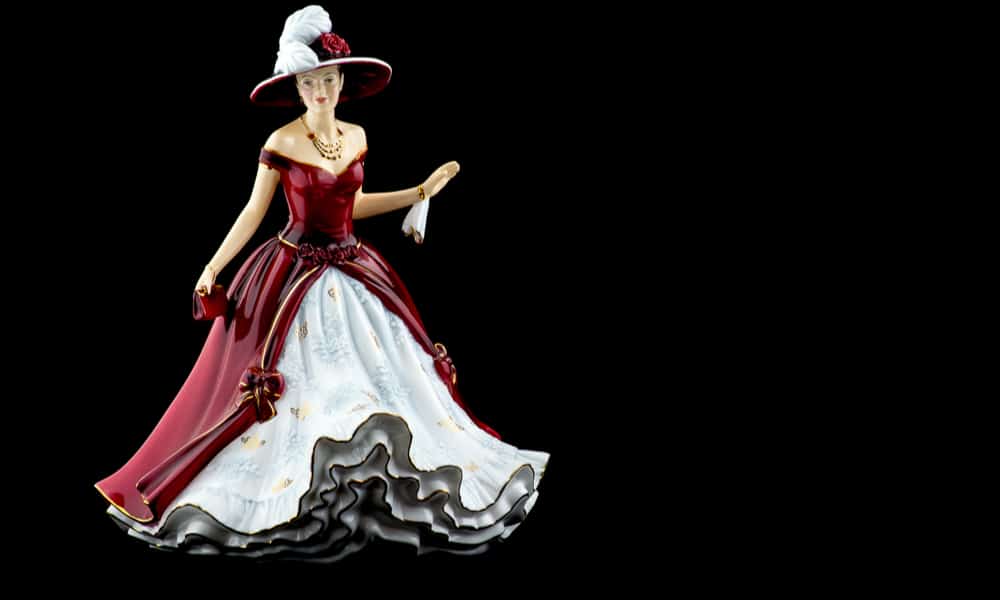 Royal Doulton’s vintage terracotta and fine china masterpieces have been mesmerizing their beholders the same way they did decades ago.

Almost all of their figurines are hand-painted, and some even take years to manufacture. That being said, it is no surprise to us that these precious statuettes come with pretty hefty price tags.

Designed by the artist John Broad, this exquisite figurine, The Bather’, was released by the Doulton Lambeth factory in 1928.

The stoneware statuette features a 19th-century beauty with brown hair embellished with a red and green floral band. The subject is depicted atop an orb, on which a lizard is crawling from one side. The entire orb is then supported by four frog feet.

On the base of the statue, you should see a Doulton Lambeth stamp and the artist’s initials ‘J.B’. As per the seller, the vintage piece is in mint condition. It is valued at $9,000 on Etsy as of March 2022.

Porcelain Matador & Bull figurine by Margaret (Peggy) Davies, one of the most celebrated Royal Doulton designers and modelers, dates back to 1964.

The statue is from the Prestige collection and features a bullfighter and a bull. Given how rare this HN2324 model is, it is no doubt that this antique statuette comes with a hefty price tag.

This Royal Doulton vintage piece is 16 inches tall, 24 inches long, and weighs around 6.25 kg. In case you’re seeking to buy this model, Phoenix.Collectibles is selling this iconic figurine for $7506.04.

Terry is depicted tilting her head and wearing a long gown with hues of purple and blue. The ‘Queen Catherine’ figurine for sale on Etsy is valued at $4,000.

The statuette is in excellent condition. Nevertheless, as with any vintage pre-owned item, expect some signs of wear on the item.

The 9.5 inches tall ‘Pretty Lady’ figurine depicts a graceful woman wearing a greyish-blue gown and a blue ribbon on her blonde hair. Harry Tittensor designed this figurine circa 1916.

The ‘Pretty Lady’ figurine being sold by mySERENDIPITYresales is in excellent condition with a well-preserved finish and gloss. It can definitely be a perfect next addition to your vintage collection in order to charm up your room.

On the base of the statuette, there’s a ‘ROYAL DOULTON ENGLAND’ stamp, ensuring authenticity.

If you’re seeking a brand new Royal Doulton figurine to boast about, this ‘Moor’ HN2082 figurine might catch your attention.

16.25 inches tall ‘Moor’ statuette was designed by Charles J. Noke and is composed of hand-painted bone china. It is one of the Prestige series figurines and was released in 1952.

The mini statue features a Moor male wearing orange clothing and a black cloak. A golden ‘The Moor’ mark and the Royal Doulton stamp are evident on the figurine’s base.

Designed by Lesly Harradine, the Doulton house’s ‘The Rustic Swain’ is a stunning piece depicting a man and a woman sitting on a bench. The man is playing flute, and the woman is seen enjoying the moment.

The statuette is high-gloss and is about 5.25 inches tall. The color palette is neutral, and the hand-painted piece is aesthetically pleasing. It is listed on Etsy for $1,982, and the seller is 5-star rated mySERENDIPITYresales.

Given how the piece is vintage and preowned, you might definitely see age-appropriate minor imperfections on it. Overall, the figurine is in good condition. Unfortunately, the base of the statue seems to have turned slightly pinkish-red. However, the seller isn’t sure why.

Only 350 Royal Doulton ‘King Charles I’ figurines were released in 1992. These figurines were manufactured to mark the 350th anniversary of the English Civil War. The base of the figurine says that Carl J. Noke and H. Tittensor were the artists behind the stunning royalty art.

It is definitely a challenging task to come by one of these limited-edition iconic statuettes. Luckily, serial no. 159 ‘King Charles I’ HN3459 is currently for sale on eBay. The pre-owned antique piece is valued at $1,747 by the seller, potantcen.

Released in a limited number in 1991, Royal Doulton ‘King Henry VIII’ HN3350 statuette is as rare as it gets. Pauline Parsons designed this 9 ½ inches tall Royal Doulton figurine that depicts King Henry VIII in his decorative royal clothing and ornament.

He is depicted turning his head towards a parrot in his hand. Beside him is a white dog with brown spots looking at the parrot. The one listed on eBay, as of March 2022, for $2,400 is serial no 873. The figurine is guaranteed to have never been damaged or repaired.

Charl J. Noke designed 16 inches tall ‘Jack Point’ figurines that were issued from 1952 to 2009. This HN2080 figurine is hard to come by. Jester from ‘The Yeomen of the Guard’ is depicted pondering. This Royal Doulton figurine is 16.75 inches tall.

If you want to get your hands on one, George Woodward has listed the iconic antique piece on eBay for $1,564. You can find the Royal Doulton stamp and ‘Jack Point’ marking on the base. The seller has assured the viewers that the figurine is damage-free and still in excellent condition.

Royal Doulton’s ‘The Orange Vendor’ figurine comes with a bronze stand with koi fish feet. Atop it, the vendor is wearing a cloak with red, black, and blue hues. The vendor has orange on one band and a big bowl of orange right in front. The metal stand is beautifully decorated.

One of the finest Royal Doulton artists, Carl J. Noke, modelled this design. He had also served some of his years at Doulton as the in-house art director. The HN1966 figurine is a rare edition of the street vendor series.

The Etsy listed ‘The Orange Vendor’ HN1966 is mentioned to be in excellent condition, devoid of any major chips, cracks, or damage. The price tag the figurine comes with as of March 2022 is $1,450.

The Royal Doulton ‘Harlequinade’ HN585, hand-molded and hand-painted, was issued from 1923 to 1940. The high gloss statuette design can be attributed to Leslie Harradine. These Doulton figurines are rare and, consequently, come with hefty price tags.

For instance, one of these iconic antique masterpieces listed on eBay is valued at $1,406. The porcelain figurine is around 6 7/8 inches tall and in good condition.

The ‘Lady Fayre’ figurine is 5.25 inches tall and a part of the Harradine classic series. The gloss statuette depicts a blonde-haired lady sitting on a bench and striking a pose. The lady is wearing a stunning off-shoulder red and purple gown.

The statuette can be dated back to the 1920s. This Royal Doulton figurine is definitely rare to come by and will cost you $1000 and above, even in pre-owned condition.

Royal Doulton released only 350 pieces of ‘William Shakespeare’ figurines in 2007. It was one of the Royal Doulton Prestige Pioneers Collection.

The 11.75 inches tall statuette was designed by Robert Tabbenor. William Shakespeare’s figurine is depicted holding a feather in one hand and a paper roll in the other.

The Etsy shop AmazingAntiquesEtc is down to their final piece of Royal Doulton ‘William Shakespeare’ figurine, and there’s a ‘selling fast’ tag on this item. Make sure to be swift if you want to add this iconic Royal Doulton statuette to your collection.

The white and pink ‘Romeo & Juliet’ HN4057 Royal Doulton high-gloss porcelain figurine is nothing but gorgeous. Douglas V. Tootle modeled this beauty that portrays the literary characters symbolized for young love, Romeo and Juliet, in a graceful royal ballet pose.

Romeo is shown kneeling and lifting Juliet in an elegant ballet position. ‘Rome & Juliet’ is written with golden scripture on the side of the stage. The figurine was released in a limited edition, with only 300 pieces released in 1999.

While you might not be able to come by a brand new unboxed ‘Rome & Juliet’ figurine, you can get this vintage item pre-owned and in excellent condition at a reasonable price. Here’s an Etsy listing for Royal Doulton ‘Romeo & Juliet’ HN4057 in case you’re interested.

‘Cleopatra’ Royal Doulton figurine is one of the six figurines in the ‘Les Femme Fatales’ collection. Only 750 limited pieces of each of these six statuettes were released in 1979. Peggy Davies designed the ‘Cleopatra’.

The figurine portrays Cleopatra on a decorated chair looking at the mirror and her helper offering a bowl of red fluid. The vintage item is 7.5 inches high and 9.5 inches long.

The figurine was manufactured from 1951 to 1953 and was released in 1977 worldwide. The rare statuette is available on Etsy for $1,000. The seller mySERENDIPITYreleases is a 5-star rated Etsy shop. The figurine is in good condition with minimal signs of wear.

‘Queen Elizabeth the Queen Mother’ HN3189 is a hand-painted bone china figurine released on the 90th birthday of Her Majesty Queen Elizabeth on 4th August 1990. This iconic figurine was released in 2500 limited pieces.

This figurine comes with a certificate, and on the base of the figurine, you should see a Royal Doulton stamp and the description of the figurine. Queen Elizabeth is depicted in her royal attire in this figurine, and she is carrying a yellow-white flower bouquet.

Serial no. 630 of this limited edition Royal Doulton masterpiece is available on Etsy for $974.82. ThrillsCurated is tagged a ‘Star Seller’; you should definitely have a good experience purchasing this piece!

Are you a Royal Doulton fanatic or simply researching these renowned figurines just because? Have you collected any of these figurines or any Royal Doulton figurines besides these? Also, which of these antiques caught your attention the most?

If you’d ask us, our heart is set on the ‘Romeo & Juliet’ HN4057 masterpiece. It would make an excellent showpiece, we must say!

3 thoughts on “18 Most Valuable Royal Doulton Figurines Worth Money”