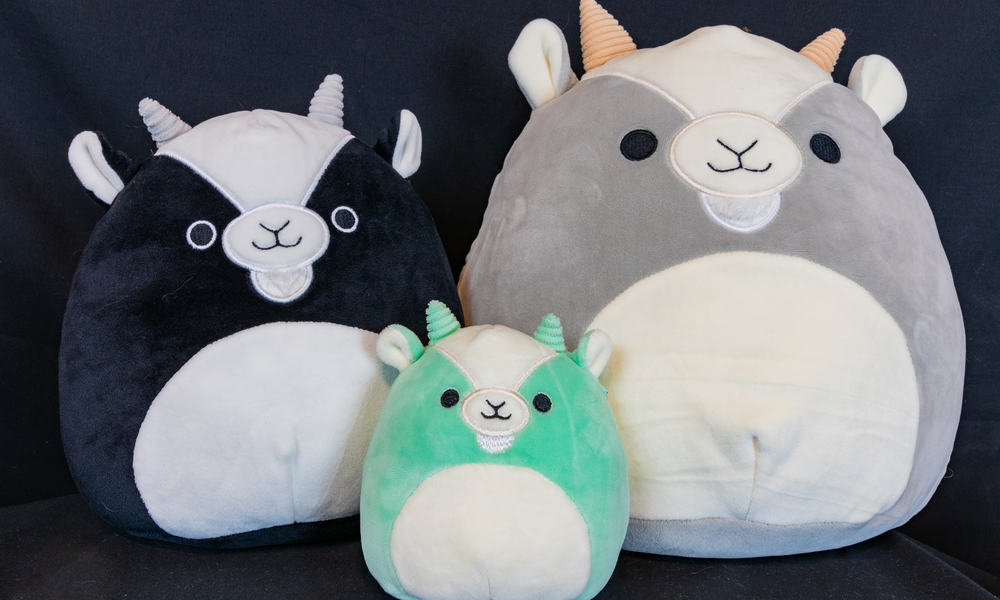 Squishmallow toys have been flying off shelves since their launch in 2017.  But these cuddly cuties are more than just fun playthings. Some of them are seriously collectable.

We’re going to take a look at 16 of the most valuable Squishmallows to have come to the market. And we’ll find out exactly how much they were worth to the people who bought them.

So if you’re ready, step this way to find out more!

Most Expensive Rarest Squishmallows Worth Money 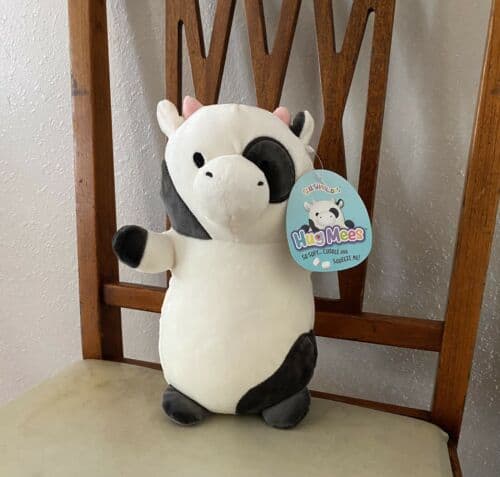 This cute cuddly cow comes from the Hug Mees line of Squishmallows. It’s very collectable because it was originally a prize in claw machines by the company Sugar Loaf. The only way you could get your hands on one was to be both lucky and dextrous!

In order to stand a chance, the toy had to be lying completely flat at the bottom of the machine. If you got lucky with the claw, it might just grab it and deliver the prize.

A Hug Mees Cow sold online in 2022 in good condition, complete with the original tag in its ear. It fetched a dairy impressive $600. 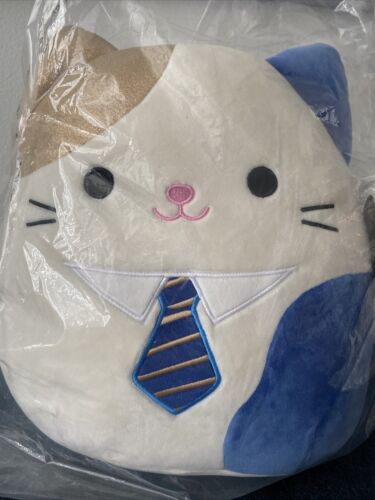 This business-like Squishmallow is a cute cat dressed in a blue suit and striped tie. He’s another sought after soft toy, because he was produced in very limited numbers.

The only way you could get one was by finding the right Founder Redemption Card. These were special cards put into packs of Squishmallow trading cards. And only 250 of them – and the associated Squishmallows – were ever made.

You can occasionally find one of the JSK Cats available online. We found two, one of which sold for $850, and the other for $1,225. On the face of it, there was little to choose between them. Both were in as new condition, in their original plastic bags.

And one of these toys is up for auction at the time of writing. The auction has two days to run, and bids are currently up to $5,100! Which just goes to show, the price buyers are prepared to pay can vary from day to day. 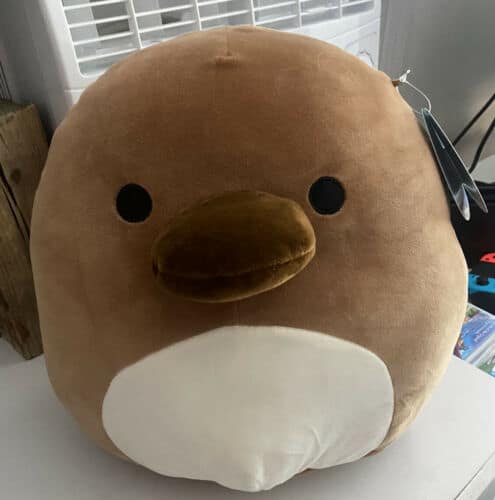 He’s one of the hardest to find Squishmallows out there, which of course makes him very desirable. He was released in 2020 and stands 12 inches tall. His body is brown, his tail is a darker shade of brown, and his belly is white.

He’s a member of the Down Under Squad, and like all Squishmallows, he has his own biography. His special talent is cooking blueberry pancakes. He’s also a big fan of playing soccer, and his ambition is to be a professional goalkeeper.

At the time of writing, he’s available for sale with an asking price of $1,000. But you may be able to bag him for a lower sum, as the seller is open to offers. 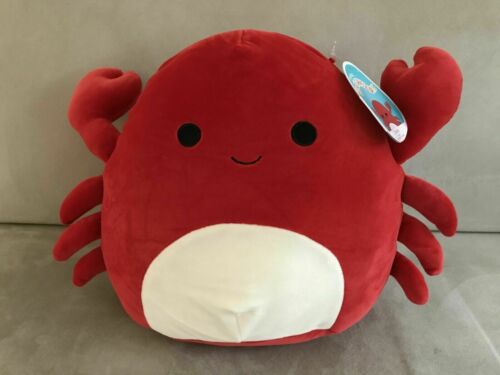 Cheerful Carlos is a crab with a rust red body and a white belly. He’s 12 inches tall and is a member of the Squishmallow Sea Life Squad.

According to his bio, Carlos is known for his love of travel. His handy skills as a salsa instructor mean he can work anywhere. But he particularly loves holidaying in Spain, as he’s a big fan of tapas.

He was made in seven different sizes, but the 12-inch version is rare. He’s currently for sale online and can be yours for a mere $1,200. 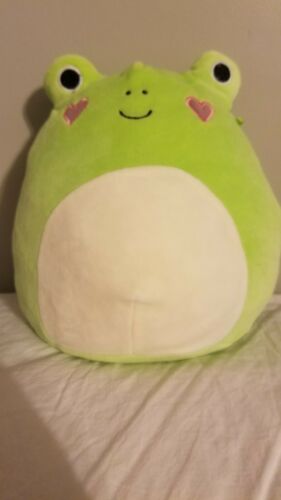 Romantic Philippe the Frog was released to celebrate Valentine’s Day. He’s a charming mint green shade, with a white body and cheeks with sparkly pink hearts on them.

Philippe’s hobbies include hopscotch, a fitting choice for a frog! He enjoys playing it with his Squishmallow chums, especially Marco. Another favorite pastime is photography, and Philippe can often be found taking snaps of his friends and family.

He was made in three sizes: 2 inches, 8 inches and 16 inches. This 8-inch version is currently on sale from an online retailer, priced at $1,000. 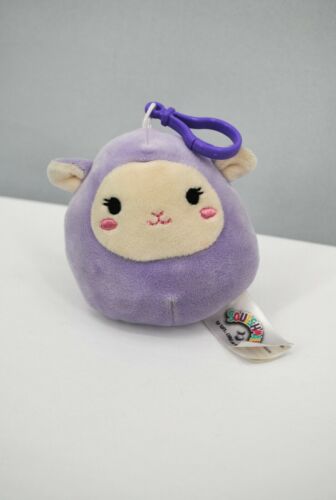 This adorable purple lamb is called Beatrice and she’s another Squishmallow released to mark a holiday. In this case, it was Easter.

Beatrice is a clip-on Squishmallow, designed to dangle from the handle of a pram or buggy. She’s just 3.5 inches high – and she’s a real hit with collectors.

This particular example was in good condition, but had been played with and didn’t come with her tags. She came up for auction in May 2022, and bidding went crazy. Over 90 bids were received, and this small plush toy eventually sold for $1,200.

This is another case, though, where prices are unpredictable. Another example, apparently in pretty much the same condition, can currently be found online for $325. 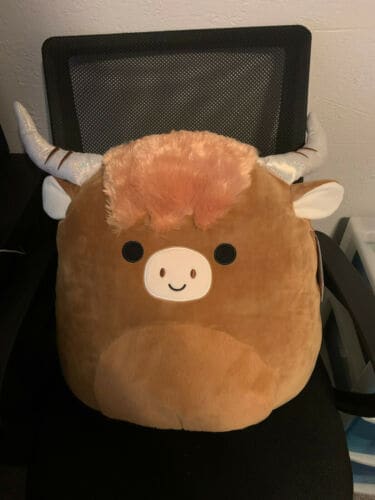 The lovely Wilfred is a Highland cow, which means he’s brown – an unusual color for a Squishmallow. He has a tuft of long hair between his horns, rather like a former US President. And he has a smiley face and fluffy fur on his tum.

He was released in 2021, and came in four different sizes: 5, 8, 12 and 16 inches. According to his official Squishmallow bio, Wilfred enjoys playing catch – presumably his horns come in useful there. He also loves spending time with his friends and snacking late into the evening.

He was offered for sale online in 2022, with an asking price of $1,000. One lucky collector snapped him up for a lower offer. 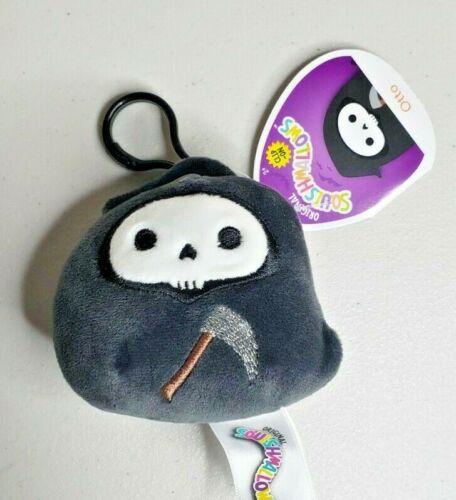 The Grim Reaper might seem an odd choice for a children’s plush toy. But Halloween special Otto somehow manages to combine cuteness with the macabre!

He was released as part of the Halloween Squad in 2012. He’s completely black except for a skull-like face. And in case there was any confusion about who he’s supposed to be, he carries a great big scythe. (Or at least, there’s a great big scythe embroidered on his belly!)

He was made as both a 3.5-inch clip-on and a 12-inch plush toy. The clip-on version was recently offered for sale online, in good condition and with his original tag. The seller was asking $996 but accepted a lower offer. 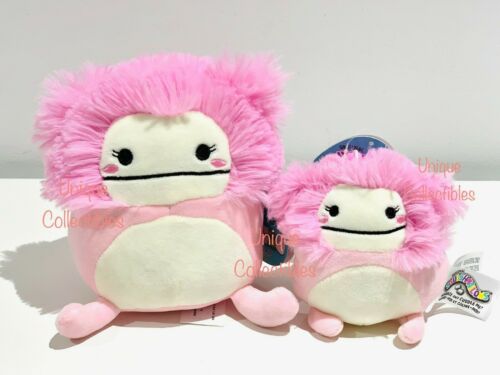 Brina the Bigfoot is the pinkest possible Squishmallow! She has long, fluffy pink hair, pink spots on her cheeks and a pink body. She was launched in 2010 and came in seven different sizes. The smallest was a 3.5-inch clip-on, the largest, a mammoth 24 inches tall.

According to her bio, Brina is an adventurous soul, who loves nothing more than snowboarding in the winter. She’s a competitive sort too, waiting all year to participate in the championships of her favorite sport.

At the time of writing, two sizes of Brina were being offered for sale together online. You could pick up the two smallest options – 3.5 and 5 inches tall – for a combined price of $910. 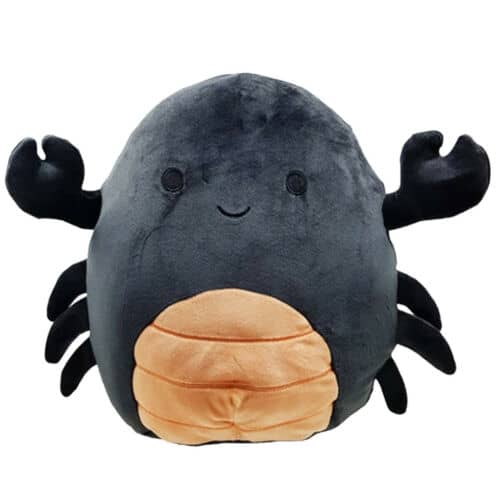 Rarely will you come across as jovial a looking scorpion as Samanthé! She has a black body and a segmented salmon-colored belly. And she has six legs, plus an extra two with distinctive scorpion pincers.

Her bio tells us she’s smart and sassy, loves travel and speaks six languages. She enjoys soca music, to which she can snap her pincers!

She’s also very desirable to collectors. At the time of writing, a good quality example was on sale online for $865. 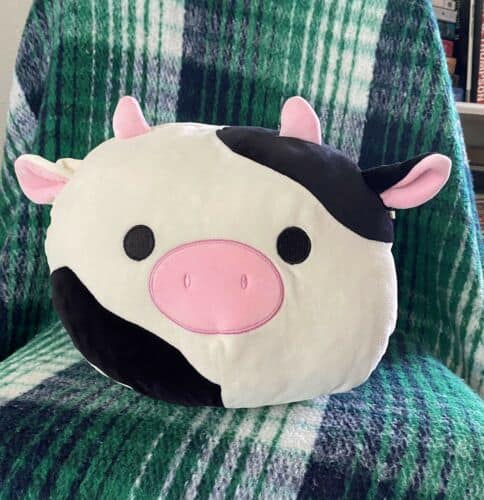 There are quite a few desirable cows amongst the Squishmallow squads, and Connor is no exception. He’s white with black patches and a pink nose, horns and inner ears. And he’s also designed to be stackable.

He’s a very early Squishmallow, dating from 2017 and has the collector number 10. He was made in seven sizes, from 2 inches all the way up to 16 inches tall.

This 12-inch example came up for sale online in 2022. He wasn’t in perfect condition: he’d been washed, and his tail tags had faded. And he didn’t come with his hang tag.

But one collector was still happy to stump up $600 to take him home. 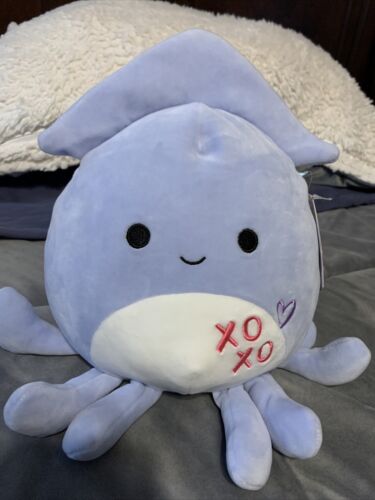 The lovely Stacy is a pale blue squid that belongs to both the Adventure and the Valentine Squishmallow squads. She was made in seven different sizes, from 3 inches upwards. The largest was 24 inches tall, and was made exclusively for the Canadian market.

The Valentine’s version features an embroidered heart and XO XO on her belly.

Stacy’s bio tells us she’s rather shy, enjoying spending time alone or with just a few close friends. She loves reading, and can be quite serious – but her pals know she has a fun side too.

An 8-inch tall Valentine’s day version of Stacy, brand new and with her original tags, is on sale online for $1,750. Jack also has a golden “500” embroidered in his ear and on the gold label sewn into his body. He’s 16 inches tall.

Only 500 of this size of Jack were ever made. For a long time, he held the crown as the rarest of Squishmallows. One sold in 2022 on an online auction site, in good original condition, for $1,500. 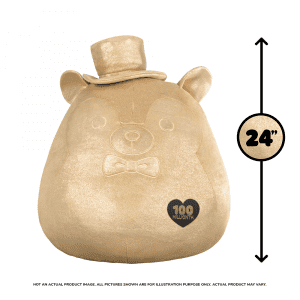 Hans the Hedgehog was an early Squishmallow with a brown body and a collector’s number of 2.

But he had several new incarnations to mark key dates in Squishmallow history. In 2021, two 16-inch versions – a Golden Hans and a Golden Detail Hans – were released to mark the sale of the 100 millionth Squishmallow toy.

The Golden Detail had a limited production run of 10,000. The Golden Hans was even more exclusive, being limited to 3,000. 24-inch versions were also produced, and these were even rarer. There were only 75 Golden Detail Hans in this size, and 25 24-inch Golden Hans.

These larger versions were reserved for the winners of a competition. And one of the 24-inch Golden Hans was identified as the 100 millionth Squishmallow ever sold. It was given a special tag in its ear, signed by the CEO of makers Kellytoys, Jonathan Kelly.

That Golden Hans was sold at auction, with the proceeds going to the charity Art in Action. This piece of Squishmallow history made an amazing $15,000. 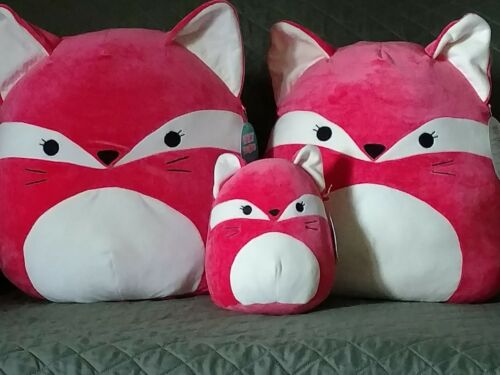 Fifi the Fox was one of the earliest Squishmallows, making her debut in 2017. She can be found in a variety of different sizes, ranging from just 2 to 16 inches.

For our money, she’s also one of the most attractive Squishmallows. She has a hot pink body, a white stripe across her eyes, and a white belly.

Fifi’s bio says that she was born on October 6 and loves to travel. Vibrant and feisty, she’s also training to be a yoga teacher.

Three sizes of Fifi are currently on sale online as a single collection. There’s an 8-inch, 16-inch and 20-inch Fifi, which the seller is calling “mom, dad and baby”.

And while there are plenty of Fifis available online at a modest price, the seller is optimistic. If you want to take all three home, the price is $18,000.

That brings us to the end of our look at 16 of the most valuable Squishmallows right now. Find the right one of these cute plush toys, and you could be quids in.

Squishmallow collectors love the toys’ cute looks and interesting backstories. And for many, shelling out the big bucks is well worth it to secure a favorite character.

If you’re lucky enough to have a rare Squishmallow, handle it with care! If you can bear to sell it, it could be worth some serious cash.